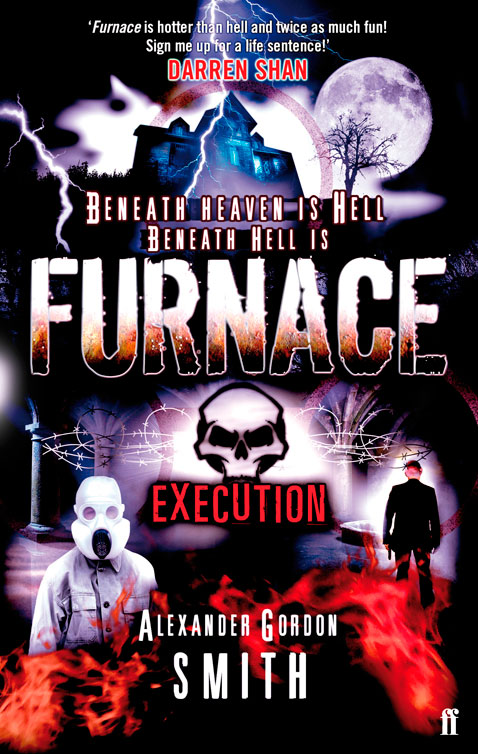 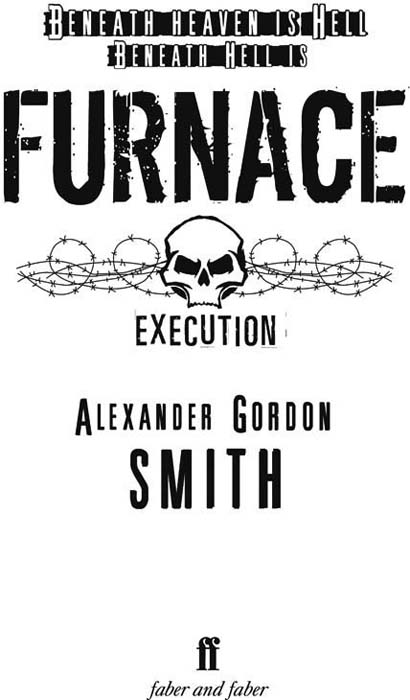 This one’s for my ‘cellmates’;
thanks for breaking out of Furnace with me.
There are too many of you to mention here,
but extra special thanks go to:

See you on the other side!

City of the Dead

A Rock and a Hard Place

The Calm Before the Storm

I once knew a boy. His name was Alex Sawyer.

He was the boy who stared back at me from the mirror, a kid like any other. Not bad looking, a little scrawny. You wouldn’t have looked twice if you’d seen him on the street.

I don’t remember much of Alex’s – of
my
– life before Furnace. It’s a blur of faceless people and half-formed places. He had a family once, I think, a mum and a dad. And friends too. But he wasn’t a good kid, I remember that much at least. He was a bully, and a thief. He took from the ones he loved and all he gave in return was grief. I can’t even remember how it all started, only that he wanted things like shoes, a bike, a computer.

That’s what I find hardest to believe about all this – not the truth about Furnace, or the monsters spawned inside the prison, but that Alex’s life was destroyed because he was so desperate to get a new pair of trainers.

Bullying in the playground, stealing the odd fiver at lunchtime, it wasn’t enough. Alex and his best friend Toby started burgling houses, stealing cash and valuables every chance they could. One day they broke into a place they thought was empty. It wasn’t. They were caught by silver-eyed giants in black suits and a shrivelled figure with a gas mask stitched into its face. Toby was shot and Alex was framed for his murder – sentenced to life without possibility of parole in Furnace Penitentiary.

Furnace. The prison. I’ve been out for less than twenty-four hours but already my memories from inside are fading. Buried a mile beneath the ground, nothing but rock in every direction, it was a place that society put children they no longer wanted, where even their parents would forget them. It was a place where kids like Alex were buried alive.

But it was something so much worse than that too. The gas-masked wheezers stalked the cells, dragging inmates into the blood-drenched tunnels beneath the prison. Deformed creatures emerged in the dead of night, tearing their victims to pieces. And watching over it all was Warden Cross, a man as cruel and as dangerous as the devil himself, a man whose eyes were so full of madness, of hatred, of rancid glee, that meeting them was like watching yourself die a million times over.

Together with friends – Donovan and Zee – Alex made a plan to get out, smuggling gas-filled gloves from the kitchen and blowing a hole in the floor, jumping into an underground river. They did what nobody else
had ever managed, they found a way out of Furnace. But that river only carried them as far as the tunnels below, and the unthinkable horrors of solitary confinement.

It was here that I – no, not me, that
Alex
– discovered the truth about Furnace. The prisoners were being turned into monsters, their minds and bodies broken and stitched back together into something new, something awful. Under the ever-watchful gaze of the warden those kids were pumped full of a dark, gold-flecked fluid known as nectar. It primed their bodies, made them stronger than they ever could have become naturally, able to withstand any injury. Then the wheezers opened them up, packing them full of muscle, giving them eyes of silver and setting them loose upon the world.

The lucky ones died on the operating table. Others became blacksuits – the hulking guards who remembered nothing of the children they once were, who craved only more and more power. Some found themselves broken beyond repair, losing their minds completely to become rats – feral killing machines that roamed the tunnels beneath Furnace butchering anyone they encountered.

And some became something worse still. Their genes evolved, making them bigger, faster, stronger than nature ever intended, beasts of unimaginable fury that looked more alien than human. The berserkers.

Alex and Zee were rescued from solitary by a boy called Simon – a kid who had been half-turned by the
warden’s surgery, his torso and one arm now that of a blacksuit, his eyes silver. And they – we – had made a break for freedom, trying to climb the shaft of the prison incinerator. But they were found, they were recaptured, and this time the warden wasted no time putting Alex under the knife.

I don’t remember the pain, only the strength it brought. My body, it was cut apart and put back together. It was
improved
. I was no longer Alex, I was something better, something more. The warden filled my head with promises of power, told me of the war that was about to come between the strong and the weak, between the monsters and the humans, spoke of the new Fatherland that would rise from the ashes of the old world. I almost forgot who I was, I almost became one of the warden’s children, a Soldier of Furnace.

And it was then that I first heard Alfred Furnace himself, the mysterious force behind all of this madness. Furnace didn’t live within the prison, but his dark presence filled every single one of the creatures who dwelled here; it gripped their every thought, determined their actions. He was their commander, their god, and his power was absolute.

But some part of me resisted him, remembering my name, remembering my old life. Zee, Simon and I, we fought our way back to general population, to the main body of the prison, and together with the inmates we cracked the gates, we busted out of Furnace.

We thought we’d made it. We thought we were free.
But the prison break was just what Alfred Furnace wanted. His forces were waiting in the shadows – an army of blacksuits and berserkers. And with the city distracted by the escaping prisoners he made his move. He began his war on humanity.

He had a secret weapon, too, a new strain of nectar, a red-flecked poison that spread like a plague. Any child who was bitten, who was filled with this improved nectar, became a super-rat, driven by fury and intent on nothing but slaughter. Within hours of the break the city fell as the new breed of rats ran riot. The army was called in, a state of emergency was declared, but it was too late: Furnace’s nightmare force was unstoppable.

And my role in this?

I’m not sure I know. I was bitten by a berserker shortly after we escaped, my blood tainted by the new nectar. But it was a small bite, not enough to turn me into one of them. After that I had visions in my head, visions that came from Furnace himself, channelled into my mind through the nectar. He showed me a tower, a skyscraper, on which a creature sat and howled at the world below. I thought it was him, thought that beast was Furnace, and I knew I had to try and kill him. I made a plan with Simon, Zee and Lucy – a girl we’d met in the city. Zee and Lucy went off to find the army, to tell them to destroy the tower. And I went after Furnace.

I didn’t find him there. I found the warden. He filled himself with new nectar, becoming more powerful than any human had the right to be. Then we fought, both of
us almost dying. The only way I survived was by drinking the blood from his veins, draining him of the new nectar. It saved my life, but it cost me the last of my sanity. I killed the warden – fed him to his own ghastly creations – but in doing so I became something worse. Because that’s what Furnace wanted, too – the warden had failed him, and he needed a new general. He wanted
me
to become his right-hand man.

Warden Cross may have lost, but Alfred Furnace had won.

I climbed to the roof of the tower – now engulfed with flames as military jets bombarded it with missiles – I perched on the spire, and saw the city crumbling beneath me. Then I screamed, realising that the creature I had seen in my vision wasn’t Furnace at all.

It’s no wonder I didn’t recognise myself. I had lost both of my hands – my right arm turned into a blade of obsidian flesh, my left blown off at the elbow by a grenade. My body had been changed by the new nectar. I was taller than ever before, stronger too. But it was more than that. Furnace’s poison surged through my mind as well, stripping away the last of my memories, the last scraps of the boy I used to be.

I made a promise, right there on that tower. I would find Alfred Furnace, and I would kill him. And if the world stood in my way then God help it, because I would tear it apart, I would watch it burn.

Nothing would stop me from having my revenge. That boy, that kid called Alex Sawyer, he wouldn’t
have wanted this. But he no longer has a say. He’s dead.

Because it’s the only chance I have of bringing him back.

The gates of hell had opened. Monsters stalked the streets, beasts of unimaginable fury who turned life to death.

And I was their new prince.

I sat on my burning throne and watched as anger devoured the world. Perched on the spire of that tower I saw the horror spill across the smoking ground, gripping the city in a fist of molten rage. Ranks of blacksuits trod the bones of soldiers into the tarmac, too fast and too powerful for those poor mortals in camouflage. I saw their victims flee into the alleyways only to find far worse things there, nightmares made flesh. Beasts that had once been children but which now stalked the shadows with hatred in their blood and murder in their eyes.