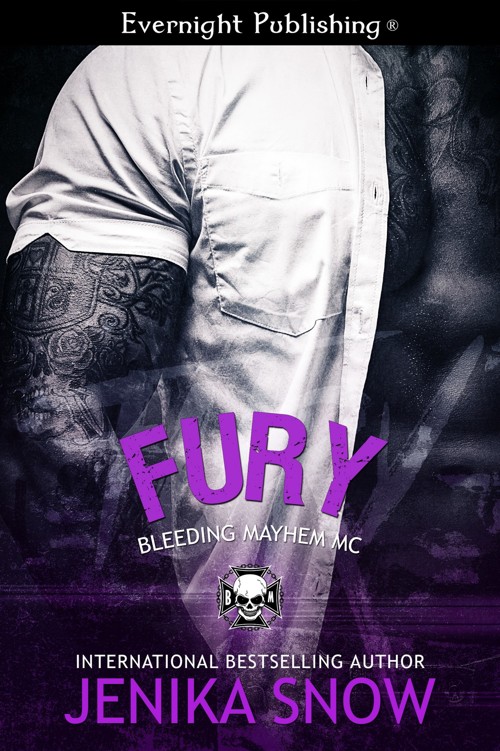 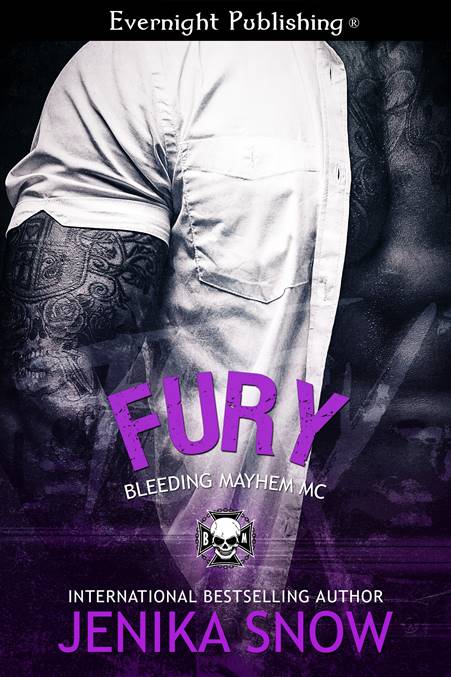 This
is the third book in the Bleeding Mayhem MC series. It is suggested to read
Mayhem
, book two in the series, in order
to understand the storyline and conflict in
Fury
.

He’d
been watching her for the last couple of weeks, memorizing her routine, where
she liked to eat lunch, whom she spoke with. He was stalking her, and he didn’t
give a fuck how creepy and low-life that fact was.

She
was a solitary woman, not speaking to anyone outside of the job she worked. And
then he’d follow her home, watch her eat dinner alone, disappear into the
bathroom for twenty minutes before coming out freshly bathed, and then end the
night with her reading a book in bed. Fury never claimed to be anything more
than he was. He was a bastard on the best of days and a motherfucker on the
worst.

The
daughter of the mob boss that had fucked over the MC, and the woman that was
going to pay for her father’s crimes in the ways Fury saw fit.

But
ever since they’d taken down her father’s business, at least for the time
being, she’d been acting more and more aware of her surroundings. She knew shit
was going down, and she knew she was going to get burned from the fire her
family caused sooner rather than later.

Something
was wrong. Angelina could feel it like icy fingers on the back of her neck. She
could feel eyes on her, and sensed that she was watched. As much as Angelina
wanted to act like she wasn’t concerned, and not give that pleasure to whomever
was after her, she knew she failed. The truth was Angelina was scared. She knew
what her father and brother did, knew what the Family was all about. But she’d
left them, left all of that behind. She didn’t want to be a part of that
violence, illegal activity, and degradation. Angelina just wanted to be herself
and live a normal life. At least as normal as a person with her family
background could have.

Angelina
was just sick and tired of all the bullshit that came with being part of the
“Family”. She just wanted normal, without having people afraid of her simply
because of who her father and brother were. She might have been born into this
world and that lifestyle, but that didn’t meant she had to stay in it.

She
felt that prickling on the back of her neck again and looked over her shoulder.
She just knew someone had to be watching her, that, or maybe her thoughts on
her father and the Family were so thick in her mind she was paranoid?

No. I know better than that. I’ve
been in situations my whole life where shit was shady.

But
she was on her own, and she needed to deal with shit if it came to her doorstep
on her own.

She
was nervous. That was clear by the way she kept looking over her shoulder as
she walked down the street. She wore a long jacket that reached her knees, and the
hood from the coat was covering her head. But she was the one he was looking
for without a doubt. She could have worn a fucking mask and Fury would have
recognized her. He shifted on the seat of the SUV he was in and lowered his
gaze to her legs that could be seen. Hell, he could only make out her calves
and ankles because of her coat and skirt, but he was already sporting semi-wood
from that sight alone. Yeah, he’d make her pay, but he wouldn’t hurt her, not
like her father and brother had done, or tried to do. He’d get the information
he wanted out of her, but he’d also show her what it meant to be with an MC
member, especially one that had been fucked over by her family.

He
rubbed a hand over his face and kept his focus on her, about to turn the engine
over and follow her home. But that’s when he noticed a dark car across the
street from the club. It sat there, the windows tinted out, but it had all of
Fury’s instincts going on high alert. This wasn’t the best neighborhood, but
the vehicle screamed money and looked out of place as hell. He knew, just by
looking at it, that it belonged to the punk-ass and ignorant Cardona gang
they’d dealt with just a few weeks past. Yeah, that car was definitely
Cardona’s. But why were they following Angelina? Were they protecting her? That
seemed like the most logical explanation, but he didn’t know why they just
didn’t take her away from this little life she’d built for herself.

But
that didn’t matter anyway, because he’d have her all to himself sooner rather
than later.

He
watched the car pull away from the curb and keep close to Angelina. She didn’t
look back again, but she was tense, that was clear. She knew something was up,
even if she might not know what that was. Or maybe she did. Hell, she could
know all the details about her father and brother fucking with the MC.

It
could have been Fury’s paranoia and tension, waiting for that other shoe to
drop, or it could mean something more. He’d seen other dark vehicles around
town whenever he’d gone out over the past couple of weeks. He had been around
long enough, and done enough shady shit, to know when things were not on the up
and up. Fury knew from a lifetime of fucked-up shit happening, that if he had a
bad feeling about all of this then something was going to go down.

And
if something were going to go down he would be ready with his guns held high.
So he’d done some of his own research, made sure he was prepared to have a
bargaining chip of his own. It was twisted and screwed up, but it was what he
was going to do to ensure his club and the men within it were safe, that no one
was going to get the upper hand over them.

Fury
had never been one to jump headfirst and think later, but he was certainly
doing it this time around. He might not give a shit if what he did was considered
wrong or immoral. Hell, he did illegal shit all the time, but he thought about
it first, made a plan, and then acted. But when it came to getting his
vengeance on the Cardona gang, what he’d done was just act first and worry
about shit afterward. Taking Angelina Cardona and doing with her whatever the
fuck he wanted, while getting information out of her, seemed like a pretty good
fucking idea to him.

But
that was just it.
He
thought it was a
good idea. The club didn’t, because, hell, they didn’t know what he was up to.
They didn’t need to know until he had the information he wanted. It was going
behind his MC’s back, wrong because of their code of ethics, but he had to do
what he had to do.

He’d
seen strange cars sitting across from the club, and could have sworn people
followed him, watched him. If nothing came from this, and it was all in his
head, Fury would deal with that. But until then, until he knew for sure what in
the hell was going on, he was going to fucking do this.

He
needed leverage, backup, and having Angelina would ensure that if shit got dark
he’d have a pawn. And hey, he’d get something out of it, too. It was a fucked
up move on his part. He knew that. He didn’t hurt women or children, and
although he wasn’t about to beat her, kill her, or do anything else that would
be retribution over what the Cardona gang had done, the MC was the most
important thing to him. He’d do anything to ensure they stayed protected, and
Angelina would be what he would use to make sure that happened.

Maybe
the dark car being around Angelina wasn’t about her at all. Maybe it was
actually someone from Fury’s past coming to get payback, which was a
possibility given the life Fury had led. There were plenty of people that
wanted a piece of him, to get back, get even, if they ever found him. He’d
burnt a lot of bridges in his day.

Or it might all be nothing, and I’m
so fucking wrapped up in my own delusions that I am losing my mind.

When
he watched her Fury didn’t wear his MC attire. He’d already taken off his cut,
not about to have the club implicated in this. They knew nothing of what he was
doing, and he wasn’t about to fuck them over because he had this burning desire
to get even. Maybe if he’d brought it to the club they would have agreed and
sanctioned what he was doing, but he couldn’t risk them voting it down. He had
to do this, and until it was completed it was a dark, burning need inside of
him. He pulled his baseball cap down lower, pulled up the lapels on the jacket
he’d thrown on, and got out of the SUV to follow her. He kept an eye on the car
that was tailing her, as well, but they kept a good distance from her.

He
couldn’t lie and say she wasn’t easy on the eyes, and that made watching her,
stalking her, that much easier. She was fucking gorgeous, but when his cock
started to get hard thinking about her he told himself whose daughter she was.
That was like ice water on a fire to him. But who the fuck was he kidding? It
wasn’t like it got rid of his hard-on fully.

He
might not know exactly what he’d do with Angelina Cardona once he had her, not
fully at least, but he wasn’t thinking that far in advance. The only thing he
was focused on was making sure he had leverage if her father, Sal, somehow came
back from the dead, which was a pretty good fucking possibility.

Tonight
was the night he’d get some fucking answers.

Flora's Defiance by Lynne Graham
Hide and Seek by Brown, P.S.
Innocent as Sin by Elizabeth Lowell
What Katy Did by Susan Coolidge
Angelique Rising by O'Neil, Lorain
WINDWALKER (THE PROPHECY SERIES) by Dinah McCall
Chevalier (Ondine Quartet #2.2) by Raveling, Emma
Torment by Lindsey Anne Kendal
Can't Get There from Here by Strasser, Todd
The Geneva Decision by Seeley James