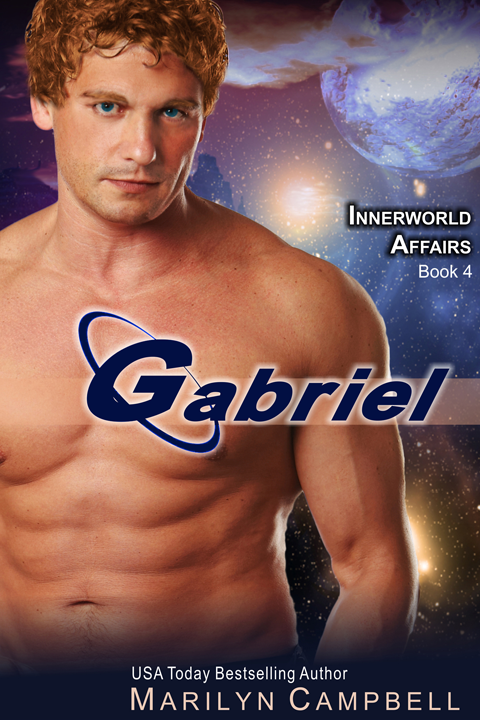 "Marilyn Campbell has another winner! Futuristic romance at its best."

"You will not take the virgin anywhere but my chamber."

Shara yanked Rebekah behind her and raised the cleaver over her head. "Get out of our way or I'll split you in two!"

King Jupiter blinked and the cleaver flew out of Shara's hand and down the corridor. An instant later she countered with her own special ability by hurling a mental suggestion at him to go to sleep, but he easily blocked it. His hand rose to strike her and she instantly paralyzed his arm. Their minds met on a battlefield of wills, pulling and pushing, each straining to overpower the other, but they were too evenly matched for either to be victorious.

"The virgin must be sacrificed," he demanded. "It is the only way to appease the gods and put a stop to the destruction."

Shara stared into eyes of pure madness. His black pupils were dilated to their fullest as he struggled harder to force her to bend to his will. She felt her mind weakening and saw his deranged smile of satisfaction.

Hold on, sweetling. I'm coming.
Suddenly Gabriel's mind melded with hers and her defensive position changed to an unexpected attack on the king's consciousness. The next instant, Jupiter's eyes rolled back in his head and he fell to the ground.

"Wait," she said as she reached down and plucked a hair from Jupiter's head. She took another second to slip it into her pouch. Then taking Rebekah's hand, the three of them ran for the stairs.

Shara noted the cloths wrapped around Gabriel's hands and upper body like bandages.

I'll explain everything later,
he promised.

The closer they got to the surface, the louder the sounds of destruction were. But nothing prepared them for the sight of it.

As they exited through the side door where they had first entered, they heard the screams and shouts of a panicked population. Throughout the courtyard, statues and columns had smashed to the ground. A portion of Poseidon's temple had already collapsed and all around the citadel, buildings were crumbling. The earthquake alone was capable of leveling the entire city but a more lethal destroyer was on its way.

Bright orange fire was erupting from the tops of three mountains that could be seen from the citadel mound—one only a few kilometers away. The burning lava appeared to be creeping down the mountainsides but there was no doubt in anyone's mind that it would not be long before it was flowing into the city.

Shara, Gabriel and Rebekah were swept along with the hysterical crowd, all heading for the beaches in hopes of finding a way to escape the inevitable.

The gates were already opened before the flood of terrified people arrived but the narrowed bridge created a bottleneck. Some people climbed the walls and dove into the canal to swim across while others pushed and shoved their way onto the bridge, not caring who they trampled to get ahead.