Game of Crowns: Elizabeth, Camilla, Kate, and the Throne 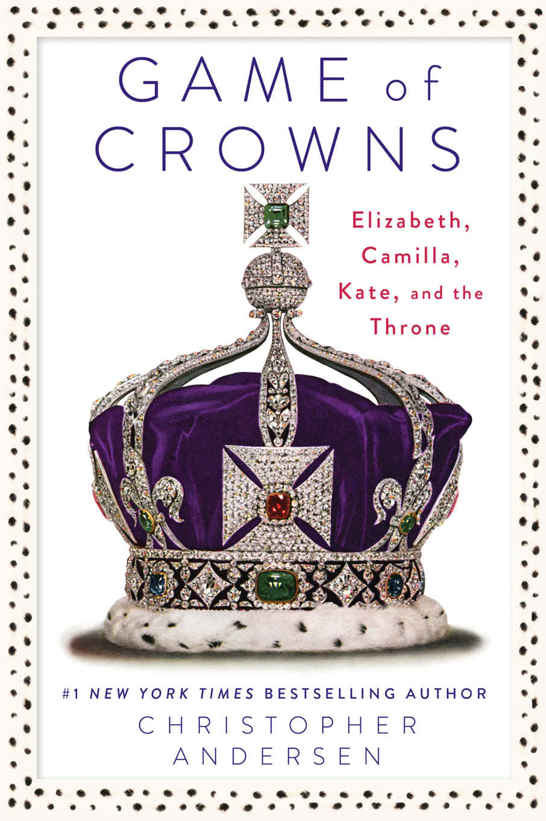 To my own Royal Family,
especially Queen Valerie

“The Queen Is Dead. Long Live the King!”

“It Will Be the Most Appalling Shock”

“I Am So Desperate, Charles. Please Listen to Me!”

“The Queen Wants to Know: Where Are the Jewels?!”

A Question of Abdication

It is not a cozy relationship and never has been. The family is not set up to be cozy.

—MARGARET RHODES, ELIZABETH II’S COUSIN, ON THE RELATIONSHIP BETWEEN CHARLES AND THE QUEEN

There’s a first time for everything.

—CAMILLA, AFTER AN ANGRY MOB SHOUTING “OFF WITH THEIR HEADS!” ATTACKED THE CAR IN WHICH SHE WAS RIDING WITH PRINCE CHARLES

T
hey are all straight out of a storybook: the beloved queen trying to hold her family and her realm together; the brooding, philandering, driven heir impatient for the throne; the beautiful, doomed wife; the scheming mistress with ambitions of her own; the upstanding younger prince, and his enchanting young wife and children. These and hundreds of other colorful characters spread out over the centuries have made Britain’s Royal Family the world’s most riveting, glamorous, critically acclaimed, and longest-running reality show.

Presiding over it all is a woman whose full title is “Elizabeth II, by the Grace of God of the United Kingdom of Great Britain and Northern Ireland and of Her Other Realms and Territories Queen, Head of the Commonwealth, Defender of the Faith.” Even this grand appellation does not fully describe the spell she casts on her subjects; recent studies show that at least one-third
of all Britons regularly dream about the Queen. In many of these dreams, Her Majesty has dropped by for a cup of tea, and merely wants to chat with a “normal person” about how difficult it is to raise a family as egregiously problematic as hers.

Now, as she celebrates her ninetieth birthday, the woman who is both the oldest and longest-reigning of all British monarchs quietly plans her exit. In his hit play
King Charles III
, Mike Bartlett imagines a future King Charles refusing to give royal assent to a bill restricting press freedom (difficult to imagine given Charles’s storied contempt for journalists) and then abruptly dissolving Parliament. A constitutional crisis ensues, there are protests in the streets, and the Duchess of Cambridge hatches a plan that will eventually lead to Charles’s forced abdication.

While the plot seemed far-fetched at first, Britons were shocked to learn in 2013 that both the Queen’s and Prince Charles’s powers were far from merely ceremonial, as had long been believed. In dozens of instances, both the monarch and her heir secretly threatened to withhold royal assent—a stamp of approval to legislation that was assumed to be automatically given—as a means of altering bills or vetoing them altogether. Pointing out that the British people had always been led to believe these powers were “quaint and sweet,” legal scholar John Kirhope said it was clear that the Queen and her son wielded “real influence and real power, albeit unaccountable.”

Her Majesty, true to form, remained above the fray until the initial furor over the extent of her true power—and more important, that of her decidedly less popular heir—subsided. In times like these the Queen, more than anyone on the planet, embodied the British motto “Keep Calm and Carry On.”

In the game of chess, no piece is more useful than the queen.
It can move horizontally and diagonally, and—like all the pieces on the board—its sole purpose is to protect the king.

And, in some cases, the
future
king.

NO ONE UNDERSTOOD THIS BETTER
than Diana, the rebel Princess of Wales, although she knew she would never be queen. Instead, as the self-proclaimed “Queen of Hearts” she sought to protect the person she wanted to be Britain’s next king—her son William. In the process, Diana first gave new luster to the monarchy, and then brought it to its knees. Once the dust had settled, it became clear that, by forcing the Windsors to connect with their people in ways they never had before, she had breathed new life into one of the world’s oldest institutions.

Now, as the era of Elizabeth II draws to a close, there are two queens in waiting—each poised to protect her king. Camilla, the quintessential Black Queen, hid in the shadows for decades, condemned as a scheming adulteress, denounced by the reigning monarch as “that wicked, wicked woman,” and blamed for the death of her rival, one of the most beloved and admired figures in the world. Biding her time and tending carefully to her image, she gradually salvaged enough of her reputation to secure a place at her prince’s side—and her future as the next queen.

Young, gracious, smart, and stunning, the White Queen, known familiarly as just plain Kate, captured the world’s imagination even before she could officially lay claim to her royal lover’s heart. Although she lacked both the pedigree and the experience of the Black Queen, she also proved to be inordinately patient—and a cunning survivor of royal dramas and court intrigue. By marrying her Prince Charming and bearing two heirs, the White
Queen cast the fate of the monarchy far into the future—perhaps as far as the next century. Elizabeth II could rest assured that, after a tumultuous four decades that nearly saw the collapse of the royal House of Windsor, the future was assured.

Beneath the surface, tensions mounted as the two queens-in-waiting protected the interests of their kings—the lackluster, benighted Prince of Wales and his wildly popular son—and their competing courts vied for the love of the people and the power that comes with it. Elizabeth II herself was keenly aware of this delicate and potentially dangerous situation. While allowing the public to believe that she would never retire, the Queen spent months with her most trusted advisors sorting out the constitutional implications of abdication. “Nobody knows whether the Queen intends to abdicate,” wrote British journalist Neal Ascherson in the
New York Times
. “More accurately, she and a tiny palace circle almost certainly
do
know, and have no intention of sharing their knowledge.”

Yet details of the Queen’s secret abdication plan have in fact emerged. This meticulously crafted blueprint for transition hinges on one thing: Since Charles has no intention of renouncing his claim to the throne so that William can become the next monarch—the Queen has never even considered this option, according to Palace insiders—the Prince of Wales would have to accept what amounts to a self-imposed term limit on his reign. This would enable William, who along with his wife and children is seen as offering the monarchy’s best chance for survival into the twenty-second century, to assume the throne before he, too, becomes tired and gray.

The proposed time limit on Charles’s reign has varied little. In exchange for the Queen agreeing to abdicate either after turning ninety or, more likely, upon the passing of her husband (Prince
Philip turns ninety-five on June 10, 2016), Charles has tentatively agreed to stay on the throne for no more than fifteen years—a reign that would, if it began tomorrow, end when Charles was well into his eighties. William could then be crowned king at a comparatively youthful fifty.

The Queen has not waited until she becomes a widow to share real power with her son. Over the past few years, Elizabeth II has shifted more and more of the monarch’s burden to the Prince of Wales, and has made it clear that, in the event that she becomes physically or mentally incapacitated, she wants Charles to wield all the authority of the sovereign as Regent. In the meantime, the Black Queen and the White Queen will continue to be the most dynamic pieces on the royal chess board. Whatever the outcome of this contest, the next Queen of England will be a commoner—the first since Anne Hyde married the future James II in 1659. But in Camilla’s case, that is merely a technicality. Although she had no title, the Duchess of Cornwall was always a bona fide aristocrat—a direct descendant of William the Conqueror and the granddaughter of a baron.

Kate, however, could someday lay claim to being England’s first true commoner queen, in the modern sense of the word. A descendant of coal miners and the daughter of a former flight attendant, the Duchess of Cambridge is in truth destined to become the first working-class queen. Ironically, she will also be the first college-educated queen.

The House of Windsor is, as Winston Churchill famously described Russia, a riddle wrapped in a mystery inside an enigma. And if the past is any indication, scandal, joy, drama, tragedy, history, triumph, and betrayal will all play their part—as they have for more than a millennium—in the Game of Crowns.

Be who God meant you to be, and you will set the world on fire!

—THE BISHOP OF LONDON, TO WILLIAM AND KATE IN HIS WEDDING SERMON

—PRINCE CHARLES, WHEN ASKED IF CAMILLA WILL BE CROWNED QUEEN

—CAMILLA, WHEN ASKED BY AN ELEMENTARY SCHOOL STUDENT IF SHE WOULD EVER BECOME QUEEN

Charles may love her, but I cannot bear the thought of “Queen Camilla.”

W
e think we know what will happen—as earth-shaking events go, this is one of history’s most well rehearsed. But when the inevitable scenario is finally played out, it will still have the power to mesmerize, and even to shock.

These are the familiar sounds of life here—hurried footfalls on plush red carpeting, whispered conversations magnified as they echo through high-ceilinged hallways adorned with the world’s masterworks. It is not unusual for chamberlains and chambermaids, ushers and footmen and ministers of state alike to scurry when summoned to attend to their sovereign.

Not Paul Whybrew—the man Her Majesty simply calls “Big Paul.” In all his many years as Page of the Backstairs and Sergeant-at-Arms to the Queen, the preternaturally calm Whybrew—at six
feet four inches he towers over his five-foot-three-inch boss—has never appeared rushed or flustered, even in times of crisis. No one appreciates Big Paul’s typically British stiff-upper-lip attitude more than Elizabeth II, who has made Whybrew one of her closest friends and confidants. So comfortable is their personal relationship that Whybrew and the Queen often spend cozy evenings watching television together in Her Majesty’s sitting room.

It isn’t difficult to see why the Queen might gravitate to someone like Big Paul. With his high forehead, close-set eyes, thinning hair, aquiline nose, and haughty aristocratic bearing, Whybrew could be Prince Philip’s younger brother. In the famous 2012 London Summer Olympics video, it is Big Paul who introduces James Bond actor Daniel Craig to the Queen before they are depicted parachuting into the opening ceremonies together.

As he approaches the Queen’s bedroom on this particular morning, the only other person who can claim to be equally close to Her Majesty stands in the doorway, ashen-faced and trembling. Starting more than a quarter-century ago as Her Majesty’s personal dresser, Angela Kelly worked her way up to the vaunted station of “Personal Assistant, Advisor, and Curator to the Queen.” In the process, the thrice-divorced Kelly, whose decidedly lowbrow Liverpool accent betrays her upbringing as a dock worker’s daughter, has so endeared herself to the monarch that she is consulted about everything from affairs of state to baby clothes. (Among other assignments, Kelly supervised the team of British and Italian seamstresses who made the baptismal gowns for the Queen’s great-grandchildren Prince George and Princess Charlotte.) During long weekends at Windsor, where Whybrew and Kelly have been given “grace-and-favor” apartments of their own on castle
grounds, the Queen invariably indulges her passion for backstairs gossip over tea with the woman she simply calls “Angela.”