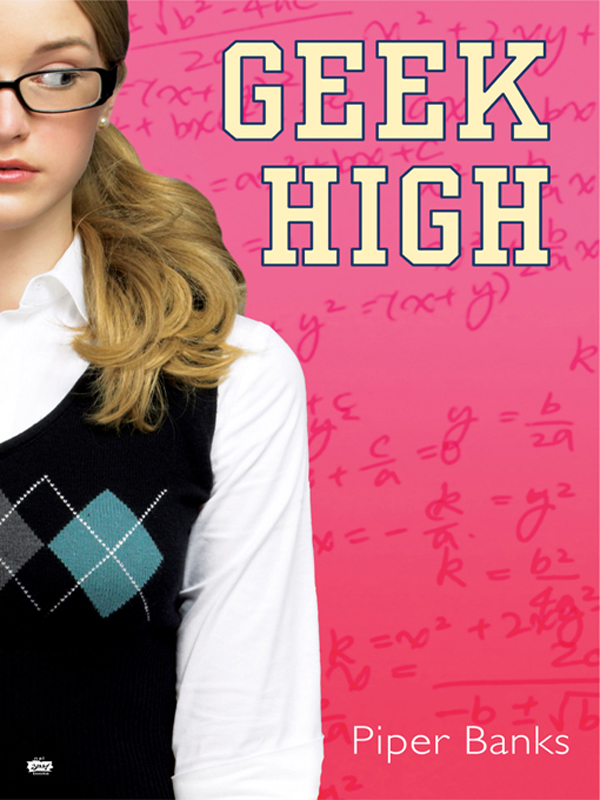 LIBRARY OF CONGRESS CATALOGING-IN-PUBLICATION DATA
Banks, Piper.
Geek High / Piper Banks.
p. cm.
Summary: Known as “The Human Calculator,” fifteen-year-old Miranda is anything but popular, and it seems that will only get worse when she has to move in with her estranged father and his family, then is blackmailed into planning a school dance, where she will be escorted by a freshman while her stepsister dances with Miranda's dream date.

PUBLISHER'S NOTE
This is a work of fiction. Names, characters, places, and incidents either are the product of the author's imagination or are used fictitiously, and any resemblance to actual persons, living or dead, business establishments, events, or locales is entirely coincidental.
Â Â Â Â Â Â The publisher does not have any control over and does not assume any responsibility for author or third-party Web sites or their content.

The scanning, uploading, and distribution of this book via the Internet or via any other means without the permission of the publisher is illegal and punishable by law. Please purchase only authorized electronic editions, and do not participate in or encourage electronic piracy of copyrighted materials. Your support of the author's rights is

For George, who inspired this story

T
his is how pathetic my life is: My nickname used to be the Human Calculator.

I
know
. It's the dorkiest nickname in the history of nicknames. But it's pretty self-explanatoryâI can do math in my head. Add, subtract, multiply, divide, fractions, even more complicated things like calculus. I don't know how I do it; I just do. When someone asks, “What's 52,652 times 95,737?” I just know that the answer is 5,040,744,524, the same way some people are musical, or good at languages, or know how to wear a scarf without looking stupid.

When I was eight years old, my weird talent landed me on the
Late Show with David Letterman
. I'd never seen the show beforeâit was on past my bedtimeâso I didn't know that Letterman specialized in having freaks on, like grandmothers who can burp the alphabet or yodeling dogs. Or little girls who can solve math problems in their heads.

The studio was really bright and really cold, and Letterman kept making all of these weird faces, which the audience thought were hilarious. I wasn't at all nervous. Instead, I was happy, because my mom had gotten me a new pair of patent-leather Mary Janes for the occasion, and I liked the clicking sound they made when I walked onto the stage. Letterman asked me a few math questions, and I answered them all correctlyâhe verified the answers with a calculator, which the audience also found humorous, especially when he pulled on his tie and pretended he couldn't figure out how to make the calculator workâand then, when we were done, he said, “Ladies and gentlemen, give a hand to Miranda Bloom, the Human Calculator!”

And the name just sort of stuck, especially since my parents taped the show, and then insisted on playing it every year on my birthday. I'd beg my mom, Sadie, to at least wait until after all of the kids at my party had left before putting the video on. But Sadie would just shake her head and say, “Miranda, there's no shame in being special.”

And so every year I'd be forced to sit through the mortifying spectacle of my eight-year-old selfâthe gap-toothed grin, the chipmunk cheeks, the swinging feet. And at the point where Letterman says, “Miranda Bloom, the Human Calculator!” all of the kids would smirk and nudge one another, while I sat there stewing in my humiliation. Then, on the first day of school after my birthday party, one of the kidsâinevitably a boy with a buzz cut, whom I had been forced to invite, since Sadie insisted that I include everyone in my classâwould start yelling, “Mir-an-da Blooooom, the Human Cal-cu-la-tor,” in an annoying game-show-host voice.

And I'd always get in trouble for slugging him. This did not endear me to the school administrators, who were already tired of dealing with me when my teachers wrote me up for correcting them in class. As though it was my fault that Mrs. Brun misspelled the word
bellwether
when she wrote it on the chalkboard.

Or that I filled in my entire math workbook on the first day of seventh grade, and so whenever the appallingly lazy math teacher, Mr. Dyson, chose to assign us worksheets rather than teachâwhich was most daysâI had a free period in which to entertain myself. Normally, I'd just pull out one of the racy romance novels I'd stolen from my mom's bookshelf. (She's a romance writer, and her publisher sends her piles of free books.) Hiding the book in my lap, I'd lose myself in stories of dashing buccaneers falling in love with beautiful heiresses. I did this with no guilt whatsoeverâI figured the books filled in the gaping holes left by the cut-and-dried sex-ed unit we covered in health class.

But one day, I was so immersed in
The Rogue and the Lady
, I forgot to pretend to scribble in my workbook when Mr. Dyson walked up and down the aisles between the desks, and he caught me reading.

“What is this?” he asked, plucking the paperback out of my hands. He looked down at the cover, which showed a man with long, dark hair and an unbuttoned shirt leaning over to kiss the bare shoulder of a woman in an old-fashioned ball gown. When Mr. Dyson looked back up at me, his droopy basset houndâlike face was thunderous.

“It's called
The Rogue and the Lady
,” I said helpfully.

“I can see that,” Mr. Dyson snapped. “The question is, why aren't you working on the math exercises I assigned?”

“I already finished them,” I said.

“So move on to the next exercise.”

Mr. Dyson let out a snort of disbelief, and reached down to grab my math workbook off my desk. But then he thumbed through it, and saw that I'd been telling the truth. He stared at my workbook for a long timeâI could tell that he was reviewing my answers to see if they were right (which, of course, they were)âbefore finally, decisively snapping it shut. He didn't seem happy that I'd done all of the work. If anything, it made him even angrier.

“May I have my book back?” I asked, without much hope.

“No,” he said, striding to the front of the room. He opened a desk drawer and tossed
The Rogue and the Lady
inside.

I never did find out how the story ended, and whether Slade and Lady Tilda ever made up after their fight over how Tilda's father, Sir Winston, had betrothed Lady Tilda to the evil Duke Harley.

Later, as I sat outside the principal's office, I could hear snatches of the conversation between Principal Scott and Sadie.

A week later, my mom pulled me out of public school and enrolled me in the Notting Hill Independent School for Gifted Children. To get into NHISGC, you have to take a test to prove that you have an IQ of at least 125, which I've always thought was harsh. What do they tell the kid who has a 124? “Sorry, you're smartâ¦but not quite smart enough”? It just seems mean.

Anyway, the school has grades K through twelve, but everyone calls the high school wing Geek High. And in a week, I'm going to be starting my sophomore year there.

Geek High was the first place I'd ever really fit in. Most of the students had ended up there after a usually disastrous attempt to fit in at a mainstream school, where we were misunderstood and frequently tormented by our classmates. But at Geek High, no one ridiculed you for being different; we were all outcasts.

And no one at Geek High had ever called me the Human Calculator. It was a definite improvement.

All of the kids who go to Geek High are smart, but just about everyone also has a special talent. My best friend Charlotte, aka Charlie, is a phenomenal painter. Lately she's been doing these huge, splotchy modern pieces, and after her latest show a local newspaper columnist said that Charlie's going to be the next Jackson Pollock. My other best friend, Finn, became a self-made millionaire at the age of twelve when he sold his computer game to a national distributor. Since then, he's created and sold a bunch more games, and basically will never have to get a real job for the rest of his life, unless he wants to.

Even the people I hate have special talents. Horrible Felicity Glen, aka the Felimonster, is an opera singer. Her best friend, Morgan Simpson, aka Toady, is a concert harpist who's played with the Miami Symphony Orchestra, and who is reason enough to hate all harpists everywhere.

So, basically, my mother was wrong: I'm not special, not when compared to the kids I go to school with. Sure, I can do math. And that might sound like it's specialâ¦for about five seconds. Right up until the point when you realize that in this age of computers and calculators, there's absolutely no benefit to being able to calculate sums in your head. It's a useless skill.

And you want to know what that makes me?

The least gifted kid in the entire freaking school.

But this year, I'm determined not to let my complete and utter inadequacy get me down. I know that you're supposed to make resolutions on New Year's Day, but I follow the academic calendar, so I'm going to make my resolutions now.

In the New School Year, I, Miranda Bloom, resolve to do the following:

Understudy by Wy, Denise Kim
Raising the Bar by Marie Harte
Quinn II (Undaunted Men #2) by J.C. Cliff
And Did Those Feet ... by Ted Dawe
Ice Hunt by Rollins, James
The Emperor Has No Clothes A Practical Guide for Environmental and Social Transformation by John Hagen
Contamination Prequel (Post-Apocalyptic Zombie Series) by Piperbrook, T.W.
Jane Austen Mysteries 10 Jane and the Madness of Lord Byron by Stephanie Barron
The Tears of Autumn by Charles McCarry
Cold to the Touch by Fyfield, Frances