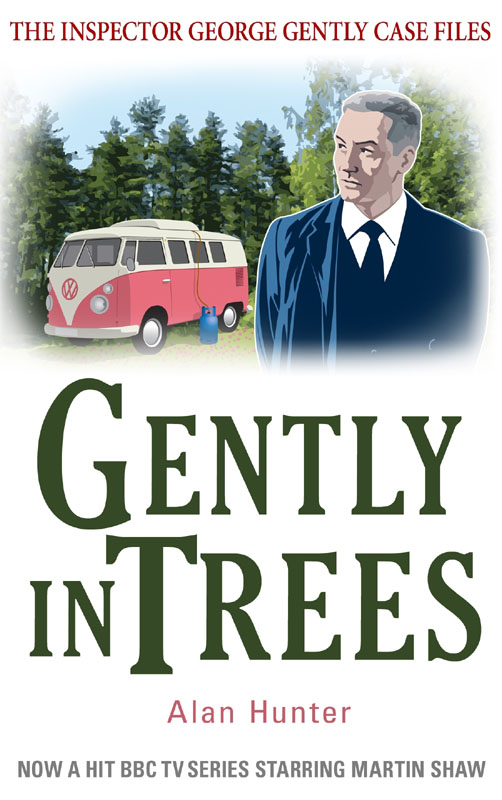 Alan Hunter
was born in Hoveton, Norfolk in 1922. He left school at the age of fourteen to work on his father’s farm, spending his spare time sailing on the Norfolk Broads and writing nature notes for the
Eastern Evening News
. He also wrote poetry, some of which was published while he was in the RAF during the Second World War. By 1950, he was running his own bookshop in Norwich. In 1955, the first of what would become a series of forty-six George Gently novels was published. He died in 2005, aged eighty-two.

Gently by the Shore

Gently Down the Stream

Gently Through the Mill

Gently in the Sun

Gently with the Painters

Gently to the Summit

Gently Where the Roads Go

Gently at a Gallop

Gently Where She Lay

First published in the UK by Cassell & Company Ltd., 1974

The right of Alan Hunter to be identified as the author of this work has been asserted by him in accordance with the Copyright, Designs & Patents Act 1988.

Data is available from the British Library.

For Julian and Kathleen Symons

The characters and events in this book are fictitious, the locale is sketched from life.

T
HE VOLKSWAGEN DORMOBILE
entered Latchford by the London road, turned right into the town centre, and selected the road to Cross. Nobody noticed it, particularly. Caravettes were common enough, at the end of June. It was latish on a Saturday evening, about the time when campers departed from the town and returned to their sites. The Volks was newish, but not otherwise remarkable; Neptune Blue, with a white elevating roof. In the rear, over the engine compartment, was packed some photographic equipment, but this was not obvious from outside. So the Volks puttered through the narrow streets and away without anyone noticing it, to remember.

It went down by the Castle Hill, which rose grassy and dim against the evening afterglow, then crossed the River Latch by a humpy bridge, near which drizzled the weir of some vanished mill. Then there was a junction of two A roads. The Volkswagen selected its course unhesitatingly. It puttered along self-intently, letting the impatient flash and go by. Not that there were many cars, that evening – Cross, after all, was just another small town; and Latchford itself reached only to the river: the road then passed into empty, heathy country. Northwards lay the wilderness of the Battle Area, with its ghostly shells of villages, and southwards breckland and starving fields, where the poor soil was snowed with chalky flints. Ancient country, still breathing prehistory. Few people had lived there, since the Iceni. And into it, into the twilight, puttered the unremarkable Volkswagen.

Came to trees. At first, broken lines of them; twisty, indigenous Scots pines. Looking deformed, almost, so low and twisted, with dark, bowed, shaggy crowns. Beggar-trees, old and cunning, who had watched the centuries come and go; old men of the heath. They reached out stealthily, fingering for the Volks as it passed below. But the Volks cared nothing. And ahead, like darkness, spread an arboreal company of a different character: trees tall, and trees straight, shouldering together in massive unity. The road bored towards them, full of aggression, but then lost heart and swung right; leaving a minor road behind for those bold enough to meet such trees. The Volks flicked on its lights, flashed, and turned into the minor road, without pausing. Passing, as it did so, a discreet sign worded:
FORESTRY COMMISSION/LATCHFORD CHASE
.

The twilight was heavy here, in the long, deep aisle of the forest. On each side of the road ran a grass verge, overhung with monster oaks and beeches. And behind these, the pines. There they brooded, in solid night. Divided, every so often, by murky rides, each signed with a white, stencilled number. And all silent, with tree silence. Nothing but the burble of the Volks. No sign of bird, or moth, or the roe deer that were said to roam here. Empty, silent, but charged with presence: the forest seemed to hold its breath.

The lights of the Volks picked up a fresh sign:
WARREN RIDE/2 KILOMETRES
. The sign was painted on a slab of timber, crosscut from a felled tree. Then came the ride itself, a junction left, with a similar sign, on a grassed island; and here the Volks slowed, giving no signal, and clambered over ruts into the ride. The surface was rough, though there was a surface, distinguishing this ride from its neighbours; a marly, stony surface, with outcrops of chalk, stained reddish with iron. And this ride was wider: had one deep grass verge, say fifty feet to the trees; compartments of fifty-year pine, Scots and Corsican, edged with small beeches, larches and maples. So it was lighter, too, having a strip of sky. Yet the Volks bumbled cautiously along the track. Thick, reddish dust, not yet laid by dew, spurted from its wheels, and left a haze behind it.

Another kilometre – then the Volks halted, and the driver switched on the light in his cab. He was puzzling over something he held in his hand: too small for a map, more like a pamphlet. Where he had stopped was near the end of the ride, where it opened up into a partly cleared glade: a picnic area, like as not, though the light was too dim to make it out. Anyway, the driver got down and switched a torch along the verges. It settled at last on a short stake, or post, driven into the ground near the junction with a cross-ride. The driver approached it. The top of the stake had been sawn across in a half-wedge, and into this surface had been carved two arrow-heads, one painted yellow, one blue. Both pointed down the cross-ride. The driver switched off his torch, returned to the Volks and climbed in. He restarted the engine, wheeled the van round, and drove very slowly into the cross-ride.

The going here was rather more suited to Forestry Land Rovers than caravettes – drifts of pine-needles, lumping ribs of chalk, and gulches of red mud. But the Volks handled it firmly, delicately raising and lowering its separately suspended wheels, its boxer engine chaffering happily as the throttle was pressed and eased. The ride was narrow, also winding – unlike the other rides in the forest. To the right it skirted Douglas pines, to the left some truly gigantic Scots. On this side, too, it was fenced with steel mesh, with rabbit-netting at the foot; and behind the fence grew bramble and underbrush, concealing whatever lay beyond. Then, a gate. The Volks halted. Its driver sat some moments, staring. The gate was of metal, as tall as the fence, and clad with sections of mesh and the rabbit netting. None of it new, except the rabbit-netting. A rusty chain and padlock secured it. Attached to it was a notice:
W D PROPERTY/KEEP OUT/UNEXPLODED BOMBS
.

Once more, the driver switched on his cab-light and consulted his map or pamphlet. A little doubtfully, he got down with his torch and searched along the fence beyond the gate. What he found this time was a small contraption, made partly of wood and partly of sheet-metal, let into the fence and the rabbit-netting, just by a gap in the underbrush. It seemed to decide him. He came swiftly back to the gate and gave the rusty padlock a jerk. The padlock opened; he showed no surprise, but pushed back the gate and drove in. Then he closed the gate again, though without replacing the padlock.

And now the Volks was in virtual bush-country, tramping on bramble, bracken and snowberry, with the rusty boles of the pines lurching massively through its headlights. But its destination was close: grumbling over a bank, it wallowed down into a small clearing, free of the underbrush; a tiny dell, where nothing grew except meagre grass, nettles and tampion. The driver levelled the Volks, and parked. He cut the engine, but not the lights. What they rested on, across the dell, was a beech tree of curious form. From a massive root-base it had sent up four stems, the boughs from which had intergrown, so that there were several complete arches of live timber, and others in the process of forming. But it was not this phenomenon that interested the driver. His attention was focused on the base of the tree. There, among the roots, and partly concealed by nettles, lay the shadowy entrance of an excavated tunnel.

The man acted quickly but silently. He went round to the side-door of the caravette. From the rear compartment he took apparatus which he set up close to the beech. Returning, he plugged in a cable, switched on the apparatus, switched off his headlights. Now there was a soft, brilliant white light, flooding the ground in front of the tunnel. The man donned headphones. He sat in the doorway, another piece of apparatus resting in his lap.

Some time later, soft as a cat, he raised this piece of apparatus to his cheek.

‘Do you think he’s coming?’ Edwin Keynes said, resting his whisky glass on his knee.

‘Well, he
is
a professional,’ Maryon said. She made a small, actressy mouth. ‘You should know how he loves a production.’

‘He’ll have us all here in the lounge,’ Maryon said. ‘Then he’ll make a brisk entrance, carrying his briefcase, march straight past us, and turn.’ She sighed. ‘Poor Adrian. Living with him has
always
been a production. I may have retired from the stage, but I’m always on a set when Adrian’s around.’

Edwin chuckled. ‘Is that how he makes love?’

Maryon sniffed. ‘Something like that. Perhaps it’s my fault. But I can’t see it. You don’t have any complaints, do you?’

‘You know better,’ Edwin said. He drank. ‘But you must have loved him at one time.’

Maryon shook her head decidedly. ‘No. I haven’t that excuse, even.’

‘Not at all. You may as well know the worst about me. I hooked on to Adrian for mercenary reasons. When it became clear I was a dud actress.’