Read Get the Truth: Former CIA Officers Teach You How to Persuade Anyone to Tell All Online

Get the Truth: Former CIA Officers Teach You How to Persuade Anyone to Tell All 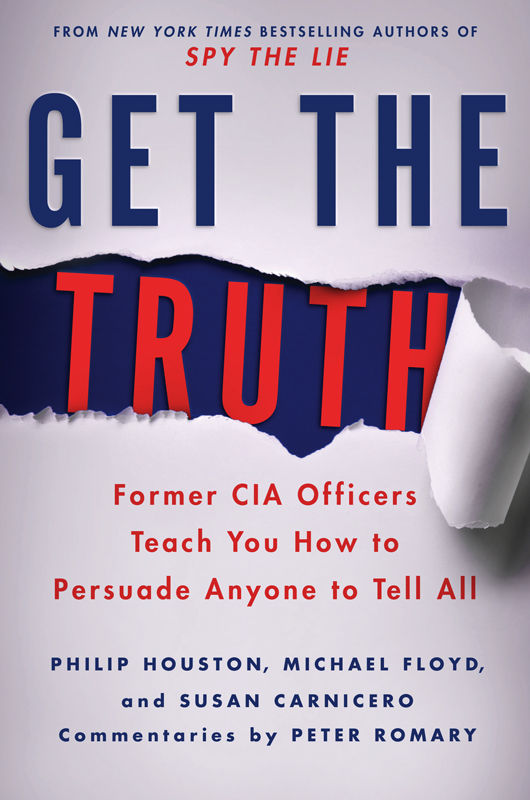 For all whose pursuit of the truth keeps us safe

It’s still dark out—the sun won’t rise for another couple of hours. You’re standing in front of a heavily secured door that opens to a small, musty, windowless room in a nondescript building at a secret location outside the United States. On the other side of the door is a man who had been brought to the room several hours earlier, after a clandestine operation executed by U.S. military forces and intelligence operatives led to his capture. This man may have been involved in orchestrating the September 11 attacks that had changed life as you and your countrymen had known it.

The man, classified by the U.S. government as a “high value detainee,” won that distinction for a reason: The knowledge he possesses could be a treasure trove of information not only about the planning and execution of the September 11 attacks, but potentially about other attacks, possibly even more heinous, that are being plotted. At this moment, there is no higher priority in the War on Terror than extracting that information from this man. The lives of what could be thousands, or even tens of thousands, of innocent people—men, women, and children—could hang in the balance. Your job is to get the man to tell you everything he knows. It’s difficult to conceive of a more daunting task, with as much at stake. What approach, what techniques, give you the best possible chance of succeeding when you walk through that door?

This book will answer that question.

At its core, it’s a book about influence. It’s about the process of exerting influence to elicit truthful information from a person who has a reason—not uncommonly, a reason that involves life-altering consequences—to want to withhold that information. Some of the techniques that in recent years have been associated with this process have sparked an intense, emotional debate in the United States and around the world. It’s especially intense and emotional when the discussion focuses on the organization to which we have largely dedicated our careers, and indeed much of our lives: the Central Intelligence Agency.

In our world, the process is commonly referred to as
interrogation
. Of course, it’s difficult to mention interrogation and the CIA in the same sentence without readily conjuring up preconceived notions, and disturbing mental images, of what the process must entail in our high-stakes world of counterespionage and counterterrorism. Such preconceptions can easily be forgiven, because there has been more than sufficient public disclosure of methods that have been employed since the War on Terror was declared on September 11, 2001, to substantiate the conclusions that many have legitimately drawn. “Enhanced interrogation techniques” is the euphemism of choice among its proponents. But it remains exactly that: a euphemism.

Sometimes, when the task at hand is to describe what something is, it’s helpful to describe what it isn’t. This book is not a position paper on interrogation techniques employed by the Central Intelligence Agency, or any other agency or institution. It is not a vehicle for the delivery of an argument, nor an apology for anything that anyone sees as warranting an apology, nor is it an attempt to stifle any debate. But to the extent that the debate will continue over the interrogation techniques that we as a nation should be prepared to employ in the interest of protecting our national security, it is a debate that will continue outside these pages. Simply put, that’s not our call.

All we can do is speak from our own experiences, drawn from careers that, in essence, were built around a single, quantifiable, yet extraordinarily challenging goal: getting people to tell the truth. We’ve pursued that goal for decades, along career paths that intersected in a way that has enabled us to learn from each other, and to meld our individual experiences into a comprehensive, cohesive body of work. It is upon that body of work that our activities as a team, and specifically our methodology for getting to the truth, have been established.

Perhaps the creation and sophistication of that methodology can best be described as a team sport, with Phil Houston acting as the player-coach. Phil, who served in senior positions within the Office of Security during the course of his twenty-five years at the Agency, is widely considered by his peers, and by some senior officials in the U.S. government, to be among the best interrogators the CIA has ever had. Indeed, his track record includes successes in some of the highest-profile cases in the Agency’s history. Michael Floyd, meanwhile, parlayed his experience and reputation as one of the nation’s foremost polygraph authorities to become a key resource in the fields of interviewing and interrogation not only in the CIA, but in the National Security Agency, as well. Susan Carnicero’s CIA career began as an operative under deep cover in the Agency’s Directorate of Operations, now known as the National Clandestine Service. Susan’s unique skill set, including her expertise in criminal psychology, would prove to be an invaluable asset in establishing her as one of the Agency’s most accomplished interrogators and screening specialists.

Our team was, to be sure, a formidable one. And smart enough to draft an ideal new player when the opportunity arose. That new player is Peter Romary, a seasoned trial attorney, educator, and internationally recognized expert in mediation and negotiation. Peter has devoted his career to service that is ultimately best encapsulated as pursuing the same goal as that of the rest of the team: getting people to tell the truth. With the team in place, then, the story of what we do and how we do it, and of how it can be practiced by anyone in any situation that involves eliciting truthful information from someone else, can be fully shared.

We took a similar tack in our previous book,
Spy the Lie: Former CIA Officers Teach You How to Detect Deception
, authored by the original trio of Phil, Michael, and Susan. In that book, we shared our methodology for determining whether or not someone is lying, and showed how it can be applied in everyday life. Those skills, as immensely valuable as they are, constitute a separate set of tools that need not be acquired in order to understand and apply our methodology for getting someone to tell you the truth. In other words, while it would be helpful, reading
Spy the Lie
is not a prerequisite for reading
Get the Truth
. That said, readers of
Spy the Lie
will recognize several familiar characters when they read this book. In that book, we showed how we determined that those characters were lying. In this one, the stories will revolve around how we got them to tell us the truth.

There’s another connection that’s worth mentioning. In
Spy the Lie
, we dispelled quite a few myths, and challenged widespread presumptions, that have long been relied upon to spot deception. In short, we shared our own real-life experiences, which have shown that a lot of the techniques people rely upon to determine whether someone is lying simply aren’t as reliable as they would have us believe. The interrogation methodology we will share in this book may come as an even more surprising challenge to conventional wisdom. In the minds of many, interrogation, almost by definition, is a harsh, confrontational encounter. In truth, that’s more likely to define a
failed
interrogation. Perhaps an apt analogy is the difference between war and diplomacy: You can seek your objective by means of trampling the enemy, or you can opt instead for the art of negotiation and influence. We’ve found the latter option to be overwhelmingly more effective.

Over the years, we’ve had to defend that position under some pretty intense circumstances. But there’s one thing we’ve never had to do: We’ve never had to come up with a socially or politically palatable euphemism for what it is we’re engaged in. The following pages will explain why. More important, they will explain
how
what we do can be adapted, with remarkable effectiveness, by anyone, in any capacity, whose aim is to get the truth.

I do not like that man. I must get to know him better.

OF ESPIONAGE AND INFOMERCIALS: THE EXTRAORDINARY POWER OF SHORT-TERM THINKING

The headquarters of the Central Intelligence Agency in Langley, Virginia, has changed a lot over the years. But the original headquarters building, designed in the 1950s by the same New York architectural firm that designed the United Nations building in New York, is a massive concrete structure that hadn’t changed much at all by the early 1980s, when Phil Houston began his assignment as a polygraph examiner in the Office of Security’s Polygraph Division. The compartmented nature of the work of the CIA meant that few employees had routine access to any work area in the building beyond their own departments, so there was only one work area in which virtually all employees would have occasion to find themselves at one time or another. That area was the Polygraph Division.

The workload of the Agency’s polygraph examiners was, as a natural consequence, consistently heavy. Between the screening of job applicants, the routine reinvestigation of Agency employees, and the occasional investigation of alleged improper or criminal conduct, the days had precious little downtime. For Phil, the pace was as exhilarating as the work itself. A relatively junior GS-8 in those early years, he was finding that despite his lack of tenure he was getting good at this stuff, and he loved the opportunity that each encounter provided to hone his skills. He welcomed the assignment he received one morning to conduct a routine reinvestigation of a CIA employee we’ll call “Mary,” just as he did every other assignment that came his way. There appeared to be nothing out of the ordinary in this particular case, but that was okay. Phil recognized that handling the run-of-the-mill cases was part of the job.

Mary was a midlevel manager who had spent at least one tour overseas, a somewhat plain woman who had never been married, and who had likely turned few heads in her travels. She had been through the polygraph drill before, so she was familiar with the process, and seemed comfortable as Phil began running through the standard list of questions in the pretest. But any comfort she was feeling was short-lived. When Phil got to the requisite question about whether she had ever worked for a foreign intelligence service, Mary’s behavior indicated that the question troubled her for some reason. Sure enough, when Phil asked her the question during the polygraph examination, it was clear there was an issue.

The Doppelgänger: A Psychological Thriller by P. Wish
The Sun Down Motel by Simone St. James
Sundown by Jade Laredo
My Brother's Crown by Mindy Starns Clark
Callie's Last Dance (a Donovan Creed Novel) by John Locke
The Sixth Extinction 2: An Apocalyptic Tale of Survival. (Part Two: Ruin.) by Johnson, Glen
The Third Generation by Chester B. Himes
Somewhere in Sevenoakes by Sorell Oates
Choose Yourself! by Altucher, James
Sarah's Education by Madeline Moore