Ghost at the Drive-In Movie 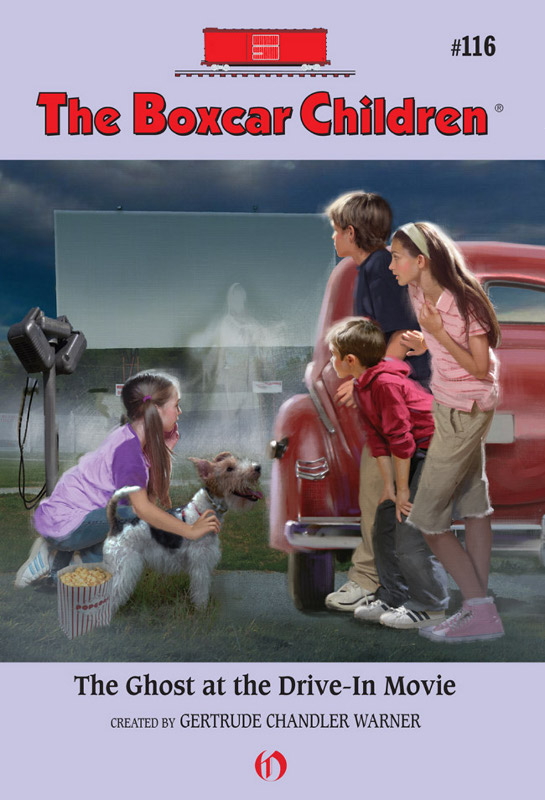 1. The Diamond in the Sky

2 The Sound of Trouble

7 To Catch a Ghost

10 The Diamond Is Forever

CHAPTER 1
The Diamond in the Sky

Benny Alden was getting sleepy in the car. It was a long ride, and he had just closed his eyes. But then he heard his grandfather say something about …
a diamond!

“Diamonds!” cried Benny. “Where?” The six-year-old loved mysteries and looking for hidden treasure.

His older sister Jessie looked back from the front seat of the minivan. “Oh, not real diamonds, Benny,” she said, laughing.

Their grandfather nodded as he drove. “I was just talking about the place where we’re going,” he said. “It’s called the Diamond Drive-in Theater.” The Aldens were on their way to visit a friend of Grandfather’s, Frederick Fletcher, who lived in the countryside beyond Silver City.

“It’s so great Mr. Fletcher owns a movie theater!” Violet said. At ten, she was the shyest of the Alden children, but even she couldn’t hide her excitement.

Henry, who was the oldest, spoke up. “I’ve read about drive-in movie theaters, but I’ve never seen one. I guess they’re pretty hard to find these days.” He was fourteen and he liked looking up information on the internet.

“There used to be hundreds of them all over the country,” said Grandfather. “There were dozens right here in Connecticut, back in the old days. Now there are only a few.”

“I bet the front door of a drive-in theater has to be really wide,” said Benny. “So that you can get your car inside.”

Jessie had to keep from laughing again. “That’s not how it works, Benny,” she said. Since she was twelve, she was always trying to explain things to her younger brother and sister. “Drive-in theaters are outdoors—right, Grandfather?”

“Indeed they are,” said Grandfather.

“And then you sit in your car and watch the movie,” Henry added. “So in a way, you’re indoors, too—inside your car, at least.”

“It sounds so strange,” Violet said. “I can’t wait to see what it’s like.”

“You’ll see it soon,” Grandfather said. They were driving past wide fields, and sometimes, shopping centers. “This used to be all farmland,” he told the children, “But it’s changing, bit by bit.” There were lots of billboards and signs.

The minivan turned left. Jessie noticed a hot dog stand with a neon sign on one side of the road. On the other was a big store that sold new cars. She looked around for the drive-in theater.

Grandfather grinned as he turned the car down a side road. They drove right past the thing that Benny was pointing at. “It’s not a billboard,” said Grandfather. “But can you guess what it is?”

Violet, who was an artist, had a good eye. “It’s a movie screen!” she said. “See how it’s all white on the other side?”

The screen stood with its back to the road. In front of it was a large gravel lot that stretched off towards the open field behind the theater.

“It looks like an empty parking lot,” said Jessie.

“I think it
is
a parking lot,” Henry said. “People must park their cars in rows—just like seats in a theater—and watch the movie.”

Grandfather drove slowly around the edge of the big lot, towards a nearby house. He stopped the car, and he and the children got out. Their dog, Watch, woke up from his nap in the back seat. He leapt out happily and ran a circle around the car.

“I’m glad we brought Watch,” Violet said.”He’ll have lots of space to run around.”

Watch trotted over toward the house, which had a big front porch. A man had come outside to talk to Grandfather. He looked almost Grandfather’s age, but he was shorter, and more stout.

“This is my good friend from college, Mr. Frederick Fletcher,” Grandfather said.

“But everyone calls me Uncle Flick,” the man added.

Uncle Flick laughed. “No, not really,” he said. “Though I do have a nephew. You’ll meet him soon.” When he laughed his face turned red, as if he had just been running. “And I got the nickname Uncle Flick because I own the Diamond Drive-in Theater—as you see, I live right next door to it! And I love to show ‘flicks,’ which is another word for—”

“Will we see one tonight?” Jessie asked.

“Neither can I,” said Violet. She’d been hoping to see
Island of the Horses
with Jessie at the Greenfield Mall.

“Now we just have to wait until the sun goes down,” said Benny, looking up at the afternoon sky. “Hurry up, sun!”

By the time the Aldens had unpacked, the sun was much lower in the sky. The children stood on the porch of the Fletcher house and looked across at the drive-in theater. A few cars were already parked in the lot beneath the screen. The theater was now open for business!

“Flick’s already at work,” said Grandfather. “Let’s find a spot to park the car and watch the movie. We can bring Watch with us.”

They got back in the minivan and Grandfather drove slowly up and down the aisles of the car lot. Since it was still early there were plenty of spaces open. But the children wanted to make sure they had a good view of the movie screen. 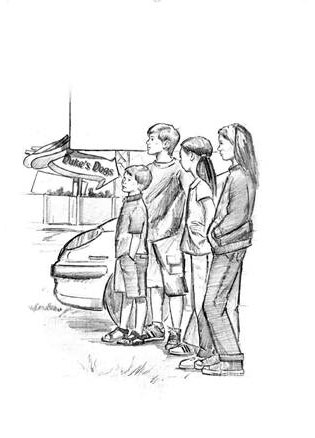 Jessie felt the best spot would be in the front row. But Henry thought that was too close.

Violet giggled. “It’s just like when we go to the movies at home!” she said.

They finally picked a spot near the middle of the fourth row. Grandfather parked the car right next to one of the odd-looking posts that stood alongside each parking space.

“What are those things for?” Jessie asked. There were metal boxes hanging on the posts. They looked like old-fashioned radios, and they were connected to the posts by long, thick cords.

“They’re speakers from the old days,” said Grandfather. “They’re so you could hear the movie from inside the car.” He rolled down the window. He took the speaker off the post and brought it inside. It had a special hook which he used to hang on the car door.

“Gosh,” said Benny. “You mean you had to listen to the whole movie through that little box?”

“James Alden!” a voice called from outside. “You’re not going to make your grandchildren listen to the whole movie through that old thing, are you?” Uncle Flick had driven up in a golf cart. He got out and walked over to Grandfather’s window. “These days you can listen through your car stereo. You just tune in to a special station.”

“Sure! And some people still love using them. Don’t know why, because they sound a bit crackly,” Uncle Flick answered. “You’d really be roughing it.”

“We’ve roughed it before!” said Benny. “When we lived in the boxcar.”

After their parents died, Benny, Henry, Violet, and Jessie had run away instead of going to live with their grandfather. They had never met him, and they had heard he was mean, so they escaped to the woods. There they’d found an old boxcar, which they’d made their home. They found their dog, Watch, in the woods, too. When Grandfather found them at last they learned he wasn’t mean at all, and they soon became a family again. As for the boxcar, Grandfather had it moved to the backyard of their home in Greenfield so they could use it as a clubhouse.

“I’ve heard you’ve had a lot of excitement in your lives already,” Uncle Flick said. “I know a golf cart ride isn’t terribly exciting, but would you like to take a tour? We have more than an hour before the movie starts.”

Grandfather nodded at the children. “Go on. I’ll stay here with Watch.”

The children were getting seated in the golf cart when a young man approached. He wore a greasy apron tied around his waist and he slouched a little. He had brown hair that nearly covered his eyes. He half-smiled at them.

Uncle Flick scowled. “He means ‘hello,’ not ‘hey,’” he told the Aldens. “Joey is my nephew. He lives nearby in Oakdale and he works here at the snack bar when he’s home from college.”

“Hey,” said Joey. Then he turned around. “Gotta go back to work,” he mumbled as he walked off. He seemed either unfriendly or shy. It was hard to tell which.

First Uncle Flick drove the golf cart over to the snack bar, where he brought out two bags of popcorn for the Aldens. They each told him thank-you as they took handfuls. The popcorn was hot and fresh and with just enough butter.

“You’re welcome,” he told the children. “We’re proud of our popcorn here at the Diamond.”

“What’s that little building in front of the snack bar?” asked Violet as the golf cart started up again.

“That’s the projection booth,” said Uncle Flick. “That’s where the film projector is.”

Just then the door to the booth opened and a young woman stepped out. She looked to be the same age as Joey Fletcher. She had short, boyish dark hair. She looked surprised when she saw Uncle Flick and the Aldens, as if she had been caught doing something she shouldn’t. But then she smiled and waved.

“That’s Amy Castella. She runs the film projector,” said Uncle Flick. “Where are you going, Amy?” he called.

“Oh, me?” said Amy, a bit nervously. “I wasn’t going anywhere. Just getting the movie ready! That’s all!” She waved again and went back inside the booth.

“She’s always very busy before the show,” Uncle Flick told the children. “Maybe you’ll meet her later. Let’s see how the crowd is doing.” He steered the golf cart down another aisle.

There were dozens of vehicles now—cars and minivans and wagons, and lots of families. Some people stayed in their cars, but many were sitting in lawn chairs that they’d brought and set up in front of their cars. They had radios so they could hear the movie. Everyone was enjoying the last bit of daylight on this late summer evening, and Uncle Flick waved hello to several families.

“It feels like Greenfield Park before the Fourth of July fireworks,” Henry said.

“There are even dogs here!” Benny said as they passed a minivan where a happy-looking beagle leaned its head out the window.

“That’s so great,” said Jessie, who loved dogs. “You can’t watch a movie with your dog at a regular theater.”

They saw a large red car decorated with blue and white balloons. The car was shiny and looked brand new. There was a sign on the hood that said
BRING YOURSELF TO BRINKER’S AUTO!
In front of the car was a man in a suit jacket the same color as the car. He smiled a very big smile when he saw the golf cart and its passengers.

“Kids, this is Dan Brinker,” said Uncle Flick. “He sells cars and his business is right across the road from here. Dan, this is Jessie, Henry, Benny, and Violet Alden—they’re here visiting from Greenfield with their grandfather.”

“Pleased to meet you,” said Dan. “I just love coming here and meeting new people and showing off the latest deals at Brinker’s Auto. Because what’s a better place for car lovers than a drive-in movie theater? I love cars, too. And I love this theater. I love popcorn!”

“Why, thank you,” Dan said. He reached out and took a big handful. “Thank you very much.” He took another handful, and then another.