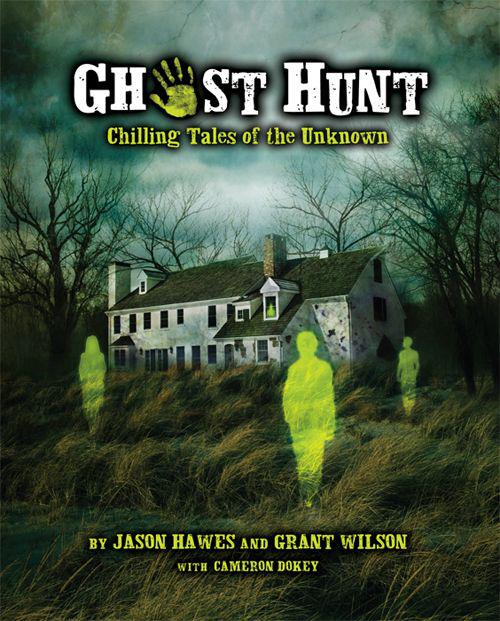 Little, Brown and Company is a division of Hachette Book Group, Inc.

The Little, Brown name and logo are trademarks of Hachette Book Group, Inc.

The events in this book are based on real investigations by the authors, Jason Hawes and Grant Wilson. However, the authors have fictionalized the stories, and any similarity to actual events or people, living or dead, is coincidental and not intended by the authors.

I dedicate this book to my ever-loving wife and true friend, Reanna, and my loving boys, Connor, Noah, and Jonah. You have been with me through the thickest and the thinnest and always support me, comfort me, teach me, and laugh with me. I could never find truer friends nor closer family. I look forward to an eternity spent in great company.

This book is dedicated to my wife, Kristen. Thank you for standing beside me and allowing me to follow my dreams, and helping me with making all things possible. To my children, Samantha, Haily, Satori, Austin, and Logan. You have showed me what it is to be young at heart again. You have also all shown me how to be a father and a friend. I love you!

Pennies from a Ghost

Ghost on the Water

Ghosts with No Legs

The Haunting of Fort Mifflin

Fresh from the Grave

The Ghost of Grandma Helen

Here’s an easy question: Do you like ghost stories?

Of course you do. Everyone likes a good ghost story. Everyone gets chills from stories about a mournful voice that whispers one name over and over again…

We’ve all heard stories like these. Maybe your older brother told you a ghost story to scare you when you were much younger. Maybe
you
told a ghost story to scare
him
! Or maybe you sat
around a flickering campfire and listened with all your friends to a creepy story and were scared together.

People have always told ghost stories, but the stories in this book are different. These stories are our job.

Our job is to go into places that might be haunted and look for ghosts or other evidence of paranormal activity. Paranormal means
beyond normal
.

For example, let’s say you hear a knocking sound in your room at night. If the noise comes from a broken shutter that hits the side of the house when the wind blows—that’s normal. But what if there is no normal reason, no banging shutter? You try but you can’t find any reason for that sound. Then, it’s possible that the reason is paranormal. Maybe the sound was made by a ghost.

Our job is to look for evidence. We have been investigating cases and looking at evidence for a long time. We started an organization called The Atlantic Paranormal Society (TAPS), and now we do some of our investigations on a TV show called
Ghost Hunters.

Along the way, we’ve come across some amazing ghost stories. We have picked out some of the most interesting ones to share with you in this book.

Some of these stories are mysteries that we had to solve.
Why don’t the ghosts that Bill sees have legs?
The answer will amaze you.

Other stories are really sad.
Why does a child’s voice call out in the darkness of an old Army fort?

And some of the stories are truly scary. Just wait until you read about the
Ghost on the Water.
It is guaranteed to give you a chill.

The stories in this book are all different from each other—but they have one thing in common: they are all based on what really happened when we did our investigations. An invisible hand really did try to push Grant off a ladder and we really did see a face in a dark dungeon.

Go to
www.GhostHuntBooks.com
and you will be able to hear and see some of the amazing evidence from the cases for yourself!

Then check out the
Ghost Hunt
Guide in the back. It will show you how to do your own investigation. Who knows? Maybe the next ghost story you tell will be your
own
.

PENNIES FROM A GHOST

T
here’s nothing to be afraid of,
Scott Briscoe thought.

For the last five minutes, maybe more, Scott had been standing in the hall just outside his own bedroom. His hands and feet felt like heavy bricks. He couldn’t move. His stomach was full of butterflies. Actually, whatever was causing his stomach to churn felt a whole lot bigger than butterflies. He couldn’t bring himself to turn the doorknob and go back into his room.

Okay. Stop acting like a stupid wimp,
Scott told himself. Still, stupid was better than another word he could think of that started with the letter
s
.

The truth is, he was terrified. Weird things were happening
all over Scott’s house. But the stuff that happened in the room he shared with his older brother, Jerry—that was the weirdest stuff of all.

Scott had gotten up to go to the bathroom. And now here he was in the hall, afraid to go back into his own bedroom.

I have to go in there,
he told himself.
I can’t leave Jerry all alone.

Scott took a deep breath.
I’m going in on three,
he thought.

One.
Scott’s right arm came up. His hand reached out toward the door.

Two.
He wrapped his fingers around the doorknob. Slowly, feeling as if it took super-human strength, he turned the doorknob to the right.

Three!
With a burst of energy, Scott pushed open the door. Quickly, before he could chicken out, he stepped into the room and closed the door behind him.

It’s so dark!
Scott thought. Too dark. Why wasn’t the night-light on? It was on five minutes ago when he got up. Who—or what—had turned it off?

The whisper snaked through the room like a current of cold air. Scott shivered. He took a step back. Just one step. That’s as far as he could go. He felt the doorknob digging into his back.

“I’m not afraid of you,” Scott said in a loud voice.

“Are you nuts, or what?” Jerry whispered. “It’s only me. And keep your voice down.”

“How come?” Scott whispered this time too. “And what happened to the light?”

“You want to try and catch it?”
Scott echoed. “And
you’re
calling
me
nuts?”

“We have to catch it,” Jerry answered. “It’s the only way to make the weird stuff stop.”

“But
how
are we going to catch it?” Scott asked. “We don’t even know what
it
is. We only know what it leaves behind: pennies.”

Pennies that appeared out of nowhere on their bedroom floor.

Pennies that were always arranged in a deliberate design.

Pennies that told Scott and his brother they were not alone.

“I don’t know how we’re going to catch it,” Jerry confessed. “I was waiting for you to come back so we could figure it out together.”

Slowly, arms out in front of him, barely picking up his feet as he walked, Scott felt his way across the dark room.

Bump.
His right knee collided with the side of his bed. Scott turned around and sat down, hard. His heart was pounding, the way it did when he ran the hundred-yard dash.

“Maybe we should sleep in the living room.”

Jerry had a point. And now that his eyes were used to the dark, Scott felt a little better. A glow came in from the big streetlight at the end of the intersection. Scott twisted around. He could just make out Jerry, huddled in the bed next to his.

“Maybe we should think like Spock,” he suggested. Scott was a huge
Star Trek
fan, but Jerry was all about
Star Wars
. “We should try and be logical. Let’s name all the places where the pennies showed up. That way, maybe we can figure out where
it
will go next. Then we can set a trap or something.”

“In front of the dresser before that,” Scott said, continuing the list.

“And before that, outside the closet,” Jerry went on. “But the first time…”

The first time was the creepiest of all,
Scott thought.

The pennies were by his bed that time, on the side where he always got in and out. He put his bare feet right on them. The room was very warm, but the coins were as cold as ice.

“I don’t think the list is helping,” Jerry said.

Scott had to agree. The pennies showed up all over the place. It was impossible to figure out exactly where they would turn up next. But one thing they knew for sure: the pennies only showed up in
their
room.

“Well—” Jerry began. He broke off. His head swiveled toward the window.

“What’s that? Did you hear that?” he asked in a tense voice.

Scott nodded. He wanted to say something, but he couldn’t talk past the giant lump of fear in his throat.

Without warning, a burst of light appeared on the wall across from the boys’ beds. Scott heard Jerry make a strangled sound. The light flickered. It seemed to hover in the same place.

Then it began to slide along the wall.

The light was almost to the bed now. Another minute and it would…

Scott bolted out of bed and dashed to the window. He was just in time to see an old pickup rumble past the house. It was heading away from town.

Scott turned away from the window, back toward his
bed—and felt a shiver of pure ice shoot straight down his spine. He tried to speak, but the only word he could get out was:
“Jerry!”

Angel Fall by Coleman Luck
The Home for Wayward Clocks by Kathie Giorgio
Soul to Take by Helen Bateman
Bullet Park by John Cheever
Sources of Light by Margaret McMullan
Thunder In Her Body by Stanton, C. B.
30 - It Came from Beneath the Sink by R.L. Stine - (ebook by Undead)
The Birds and the Bees by Milly Johnson
The Country Club by Miller, Tim
Thin Ice by Laverentz, Liana