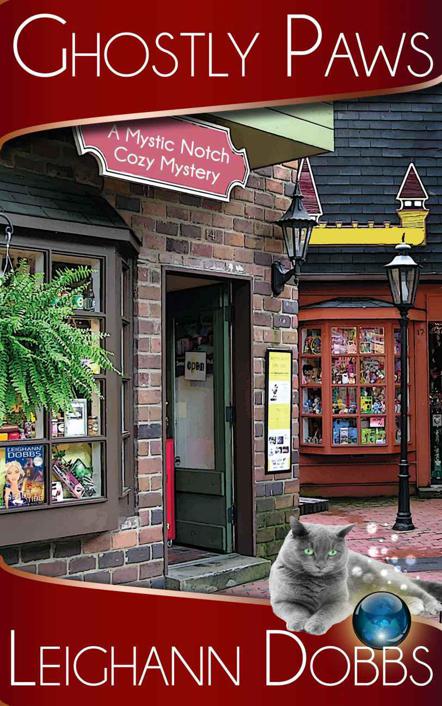 No part of this work may be used or reproduced in any manner, except as allowable under “fair use,” without the express written permission of the author.

In over thirty years as head librarian for the Mystic Notch Library, Lavinia Babbage had never once opened the doors before eight a.m.

I knew this because my bookstore sat across the street and three doors down from the library. Every day, I passed its darkened windows on my way to work. I watched Lavinia turn on the lights and open the doors every single morning at precisely eight a.m. from inside my shop.

Most days I didn’t pay much attention to the library, though. It was really the last thing on my mind as I walked past, my mind set on sorting through a large box of books I’d purchased at an estate sale earlier in the week. The edges of my lips curled in a smile as I thought about the gold placard I’d had installed on the oak door of the old bookshop just the day before.
Wilhelmina Chance, Proprietor
. That made things official—the shop was mine and I was back in my hometown, Mystic Notch, to stay.

I hurried down the street, deep in my own thoughts. The early morning mist, which wrapped itself around our sleepy town in the White Mountains of New Hampshire, had caused the pain to flare in my leg, and I forced myself not to limp. I continued along, my head down and engrossed in my thoughts when I nearly tripped over something gray and furry. My cat, Pandora, had stopped short in front of me causing me to do a painful sidestep to avoid squashing her.

Pandora blinked her golden-green eyes at me and jerked her head toward the library … or at least it seemed like she did. Cats didn’t actually jerk their heads toward things, though, did they?

Of course they didn’t.

I looked in the direction of the library anyway. That’s when I noticed the beam of light spilling onto the granite steps from the half-open library door.

Which was odd, since it was only ten past seven.

My stomach started to feel queasy. Lavinia never opened up this early. Should I venture in to check it out? Maybe Lavinia had come in early to catch up on restocking the bookshelves before the library opened. But she never left the door open like that. She was as strict as a nun about keeping that door closed.

I stood on the sidewalk, staring at the medieval-looking stone library building, my pre-caffeine fog making it difficult for me to decide what to do.

Pandora had no such trouble deciding. She raced up the steps past me. With a flick of her gray tail, she darted toward the massive oak door, shooting a reproachful look at me over her shoulder before disappearing into the building.

I took a deep breath and followed her inside.

“Lavinia? You in here?” My words echoed inside the library as I pushed the heavy oak door open, its hinges groaning eerily. The library was as still as a morgue with only the sound of the grandfather clock marking time in the corner broke the silence.

I crept past the old oak desk, stacked with books ready to return to the library shelves. The bronze bust of Franklin Pierce, fourteenth president of the United States, glared at me from the end of the hall. I didn’t have a good feeling about this.

“Meow.” The sound came from the back corner where the stone steps lead to the lower level. Dammit! I’d warned Lavinia about those steps. They were steep and she wasn’t that steady on her feet anymore.

I headed toward the back, my heart sinking as I noticed Lavinia’s cane lying at the top of the stairs.

“Lavinia?” Rounding the corner, my stomach dropped when I saw a crumpled heap at the bottom of the stairs … Lavinia.

I raced down the steps two at a time, my heart pounding as I took in the scene. Blood on the steps. Lavinia laying there, blood in her gray hair. She’d fallen and taken it hard on the way down. But she could still be alive.

I bent down beside her, taking her wrist between my fingers and checking for a pulse.

Lavinia’s head tilted at a strange angle. Her glassy eyes stared toward the room where she kept new book arrivals before cataloguing them. I dropped her wrist, ending my search for a pulse.

I called my sister Augusta, or Gus as I called her, who also happened to be the sheriff, and sat on the steps to wait. I might have drifted off, still sleepy from the lack of caffeine, because the next thing I heard was Augusta’s voice in my ear.

I opened one eye to the welcome sight of the steaming Styrofoam coffee cup that Gus was holding out to me.

“What happened?” I studied Gus who stood on the steps in front of me. No one would have guessed we were sisters. She was petite, her long, straight blonde hair tied back in a ponytail, which, I assume, she thought made her look more sheriff-like. Even in the un-flattering sheriff’s uniform, you could tell she had an almost perfect hourglass figure. I was tall with thick wavy red hair, my figure more rounded—voluptuous, as some described me. The only thing we had in common was our amber colored eyes—same as our mom’s.

“I was on my way to open the bookstore when I noticed the lights on in the library.” I glanced down the street toward the municipal parking lot.

Now that the spring warm-up was here, I was trying to work in some extra exercise by parking in the lot two blocks away instead of on the street near the bookstore.

“Was that unusual?” Gus asked.

Gus started up the steps toward the library. “Did you touch anything?”

I stood up, wincing at the pain in my left leg—a reminder of the near fatal accident over a year ago that was one of the catalysts for my move back to Mystic Notch. The accident had left me with a slight limp, a bunch of scars and a few odd side effects I didn’t like to dwell on.

“Nope, other than Lavinia. I didn’t know if she was alive and needed aid,” I said as I followed Gus into the library.

Gus stopped just inside the door and looked around. The coppery smell of blood tinged the air, making me lose interest in my coffee.

“Nope, I think she just fell down the stairs.” I started toward the back. “You know she was getting on in years and not that steady on her feet.”

We turned the corner and my stomach clenched at the sight of Lavinia at the bottom of the steps.

“That’s her cane?” Gus pointed to the purple metal cane, which was still lying as I’d found it.

“Yep. Looks like she lost her balance, dropped the cane, and fell.”

Gus descended the stairs, her eyes carefully taking in every detail. She knelt beside Lavinia, studying her head. “She’s pretty banged up.”

“I know. These stairs are hard stone. I guess they can do a number on you.” I winced as I looked at the bloody edges of the steps.

“So, you think this was an accident?”

“Sure. I mean, what else could have happened?”

“Yeah, you’re probably right. No reason to suspect foul play.” Gus stood and looked back up the stairs, down the hall and then back at Lavinia.

Her lips were pressed in a thin line and I wondered what she was thinking. I knew she was a good cop, but the truth was I didn’t really know her all that well. Eight years separated us and she was just a teenager when I’d moved down south. Now, twenty-five years later, we were just becoming acquainted as adults.

“Mew.” Pandora sat on the empty table in the storage room where Lavinia temporarily stored new books or returns before she catalogued them. I’d forgotten she was here. She wasn’t really my cat … well, not until recently. I’d inherited her along with the bookstore and my grandmother’s house. I still wasn’t used to being followed around by a feline.

“Isn’t that Pandora?” Gus asked. Gus had been close to grandma—closer than I had, and it was somewhat of a mystery that Grandma had left me the shop, her house and the cat. In her will, she’d said she’d wanted me to come back home and have a house and business, which was odd because the timing had been perfect. She’d left a tidy sum of money for Gus, so at least there were no hard feelings.

“Yeah, she rides to work with me.”

Gus raised a brow at me, but didn’t say anything. Pandora stared at us—her intelligent, greenish-gold eyes contrasting eerily with her sleek gray fur.

Gus reached out to pet Pandora, who still sat on the table staring at us. “Are there any mice in here, Pandora? Maybe Lavinia heard something down here and wanted to investigate.”

“Maybe.” I looked around the floor for evidence of mice. Lavinia ran a pretty tight ship so I doubted there would be any mice in the library. And, since the room was empty of books, she hadn’t come in early to catalogue new arrivals.

Which begged the question … why
was
Lavinia in the library this early in the first place?

The EMT’s and Gus’s deputy arrived and got busy with their crime scene investigation. After Gus asked me the standard questions and had the nerve to tell me not to leave town, I headed down the street to open the bookstore.

The crowd of four ‘regulars’ were already waiting outside, their necks craning to see what was going on at the library.

You wouldn’t think a bookstore would have regulars, but mine did. Apparently, I’d inherited them, along with the store and the cat. They’d been gathering there in the mornings with their coffee and tea for decades. I guess the coffee shop down the street didn’t have the same ambiance.

“What’s going on down there?” Cordelia Deering looked at me with bright sparkling blue eyes. Her twin sister Hattie, stood beside her and, dressed almost identically, gave me the exact same look of expectant excitement. The women were in their mid-eighties, but had more energy than people who were decades younger. They were always up for hearing a tidbit of juicy gossip and liked to keep up on town happenings. This particular happening, though, I hoped wouldn’t be too much of a shock.