Gift of the Golden Mountain 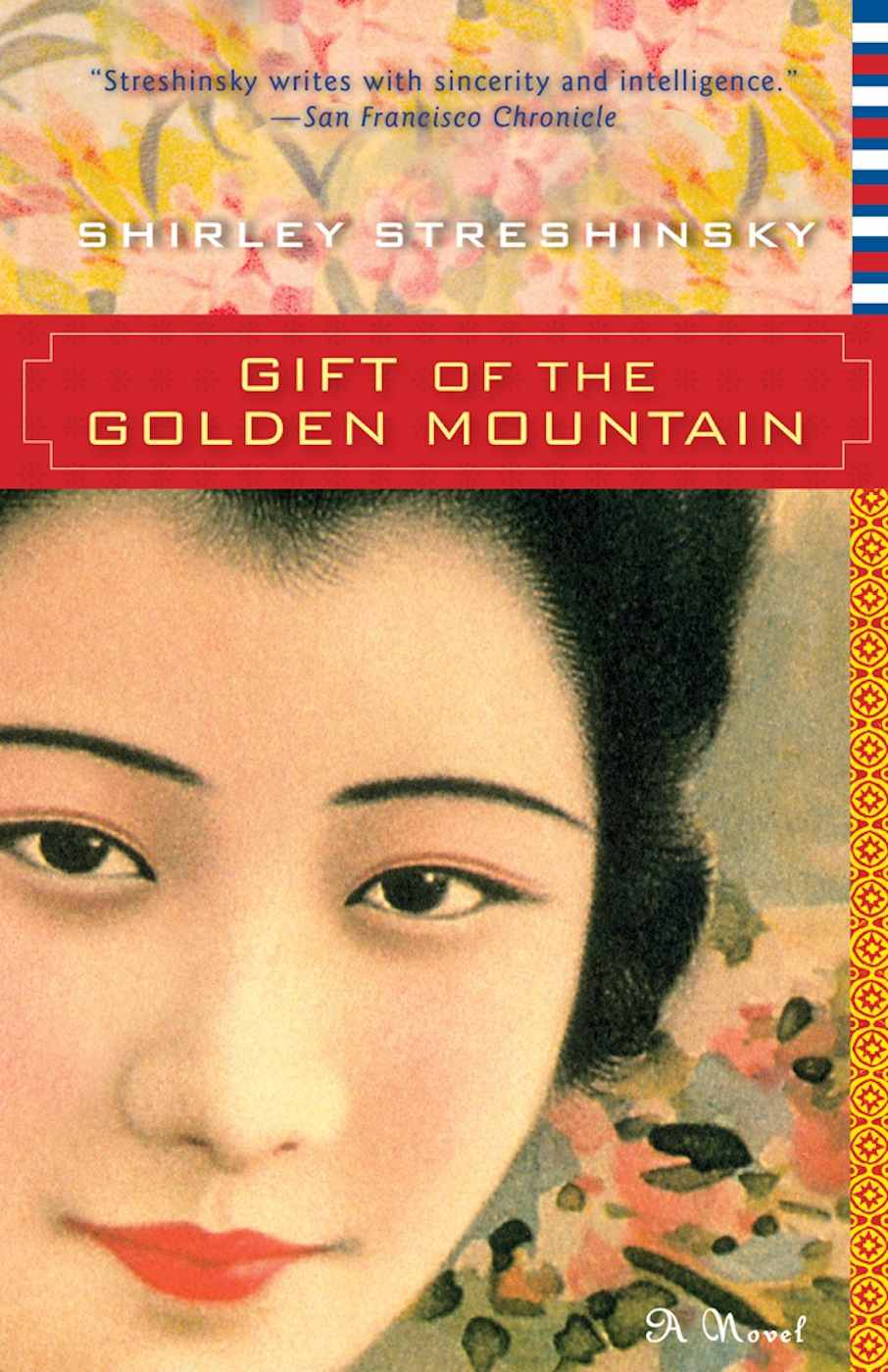 AUDUBON: LIFE AND ART IN THE
AMERICAN WILDERNESS

GIFT OF THE GOLDEN MOUNTAIN

THE SHORES OF PARADISE

Gift of the Golden Mountain

MAY IS MISSING. She is somewhere in Southeast Asia, possibly she made it into Saigon on one of the last flights, we can't be sure.

Strange, how I put off turning on the lights. Sometimes I let the dusk gather so that I can scarcely make out the corner of mother's old cherrywood sideboard, and go banging into it with my wheelchair. I have been holding on to the fading light, trying to deny the darkness. I know it is a futile thing to do. At my age, I know.

All day long I've been listening to the radio reports from Saigon. I switched to the television for the five o'clock news. The first films were being shown, flickering images of crowds pressing against the gates of the American Embassy, of helicopters landing on the roof of the building, creating dust swirls lit by arc lights, lifting the last Americans out.

I am transfixed by the scene, the exodus: the fall of Saigon, the true and vainglorious end of the war in Vietnam, as confused
and chaotic and humiliating as everything else we have done in that poor, sad country. It is dark now; only the television lights my parlor, sending flickers and flashes and shards of color into the dark corners. I don't think I could bear to see it in full light.

May is missing.
That was the message.
We think she got into Saigon, we can't be sure.

And I think I saw her, in one of the news films. It was only for an instant, she was in the surging crowd outside the American Embassy, her arms were raised, she seemed to be reaching for one of the marine guards. I only had a glimpse but I think it was May. Now I am watching every program, hoping to see her again. After the eleven o'clock news there is going to be a special on the events of the past days in Saigon, and if they show the film, maybe I can tell for sure.

Two men came to my door late this afternoon. One flapped an official-looking identification card from the U.S. State Department at me and said they wanted to ask a few questions about May. A routine background check, "nothing ominous," he added, with a condescending smile that was supposed to reassure me. They would appreciate my help, he said.

I have had some experience with these men with their empty eyes and practiced silences, enough to know that it is best to volunteer as little as possible. I was not in a mood to tell them about May, I wanted to stay close to the coverage of this last, big story out of Vietnam. But I knew, too, that they would not easily be turned away, so I motioned them into my parlor but made no move to turn off the television.

"We would like to ask you a few questions," the older of the two repeated politely.

"Shoot," I came back, feigning a feistiness that I did not feel, my eyes on the television.

"I believe you are a sort of historian to the Reade family . . ."

"Not
sort of
," I corrected him, "I am the archivist for the Sara Hunt Trust, with responsibility for all of the documents and personal papers of the Hunt and Reade families, two old California clans."

He cleared his throat, trying, I suppose, to decide how best to approach an old woman who shows signs of not cooperating. He was about to say something when I held up my hand for, silence. The commercial had ended and the television had returned to Saigon; lights flared, you could hear the dull sounds of artillery in the background, the reporter was breathless.
The ambassador will be leaving soon . . . The compound is filled with Vietnamese, desperate to get out . . . The American fleet is offshore, waiting . . . The Viet Cong are at the gates of Saigon, closing in . . .

"Are you associated with the California Historical Society?" the man asked.

"No," I answered absently, stung by the panic in the Vietnamese faces caught pressed against the bars of the Embassy, "I am employed by the Hunt Trust, though we do cooperate with the Society. Sara Hunt was one of its benefactors."

"I see," he said, though plainly he didn't. As CBS turned its attention to some other part of the world, I turned mine to the men sitting in my parlor. The older of the two was, perhaps, thirty-five and beginning to bald. His face was curiously nondescript; it might have been handsome, had it any animation. He was wearing a suit and a drip-dry shirt which had not been pressed. I could imagine him solemnly washing it in a basin and hanging it to dry over the bathtub. The other was younger, not more than twenty-five, I think, and his hair was shorter than any of the young men I knew. Even the residents out at the Medical Center wear ponytails and dress in jeans. I wondered if he knew how clearly his appearance marked him.

"Why exactly are you investigating May?" I asked, to see how they would evade the question.

"We thought you would be the best person to give us a rundown on her family history—her grandparents, that sort of thing," the older one countered.

"I suppose I might be," I answered, and left it at that, knowing he expected me to play the garrulous old woman and give him what he wanted for the asking.

Instead I turned back to the television. Walter Cronkite was intoning the benediction for CBS: "This is a night that history will long remember . . . the last American Marine has left Saigon." And then they showed it again: A woman, tall with long dark hair, her arms raised. May, it could be May.

"Will you tell us?" the younger of the two, grown impatient, finally asked, causing the older man to frown.

"About the Reade family tree," he said.

The older man cut in, "Perhaps you could begin by telling us why she uses the professional name of Dr. Wing Mei-jin."

I laughed out loud, I couldn't help it. They looked at me peculiarly, as if laughter was the last thing they expected. "She calls herself that because it's her name," I told them. "If you don't believe me, check her birth certificate—though you won't find the 'doctor' of course."

He scarcely took time to smile at my small joke. "Then why did she go by the name 'May Reade' for so many years?"

"I don't really know," I lied, then added a grain of truth: "Maybe she just wanted to sound more American."

"But she is American," the younger man said. Suddenly I was weary of the banter; best to give them the information that was on the record and be rid of them.

"May's father, Porter Reade, grew up on the family ranch in southern California," I began, turning off the sound but keeping my eyes on the television. "Willa and Owen Reade had come to California in the late 1880s. Unfortunately, Owen died before
Porter and Katherine were born in 1904. Katherine is now Mrs. Katherine McCord." I was on thin ice here, I had to choose my words carefully not to lie outright, while keeping the family secrets. "The children . . ."

It was a statement, I didn't have to answer. "The children were raised by Mrs. Reade's younger sister, Lena Kerr. In those days she was called a spinster, and she lived with the Reades."

"Why was that?" the younger man asked.

"Oh it wasn't so unusual for the times," I told him. "After her husband's death, Mrs. Reade was busy running the ranch, an occupation she was good at, and one she enjoyed. Her sister had a natural affinity for children, and they for her. In fact, Lena reared all the Reade children—there were two older boys. It was an arrangement that seemed to satisfy everyone." I turned up the sound on the television slightly, hoping it might get them off the subject. Dear Lena is not in the public domain. Few people now living know that Porter was her child, that Kit was not his twin but his cousin.

"What about Porter Reade as a labor organizer?"

I nodded, relieved to be off the subject of Porter's parents. "In the thirties he was active in the labor struggles on the San Francisco docks. And he was in the thick of things during the General Strike and riots in the 1930s. But all of that information is detailed in the files of the House Un-American Activities Committee. If you don't have access to those files," I said, more sarcastically than I had meant, "just read Porter's book,
Notes from the Waterfront.
You can get it at Moe's bookstore in Berkeley—it was reissued in paperback a year or two ago. Or if you want to know what happened to him as a war correspondent, read
Dispatches from the Burma Road.
Unfortunately, he didn't get to write about his trials with Joe McCarthy and those characters on the House Un-American Activities Committee who were so certain he was a Communist."

Christmas in Apple Ridge by Cindy Woodsmall
Husband by the Hour by Susan Mallery
The Promise of Jenny Jones by Maggie Osborne
The Girl Who Never Made Mistakes by Gary Rubinstein
The Culling by Steven Dos Santos
The Heart Specialist by Claire Holden Rothman
Hit and The Marksman by Brian Garfield
The Death Seer (Skeleton Key) by Tanis Kaige, Skeleton Key
Heather Graham by Bride of the Wind
Night Music by Jojo Moyes