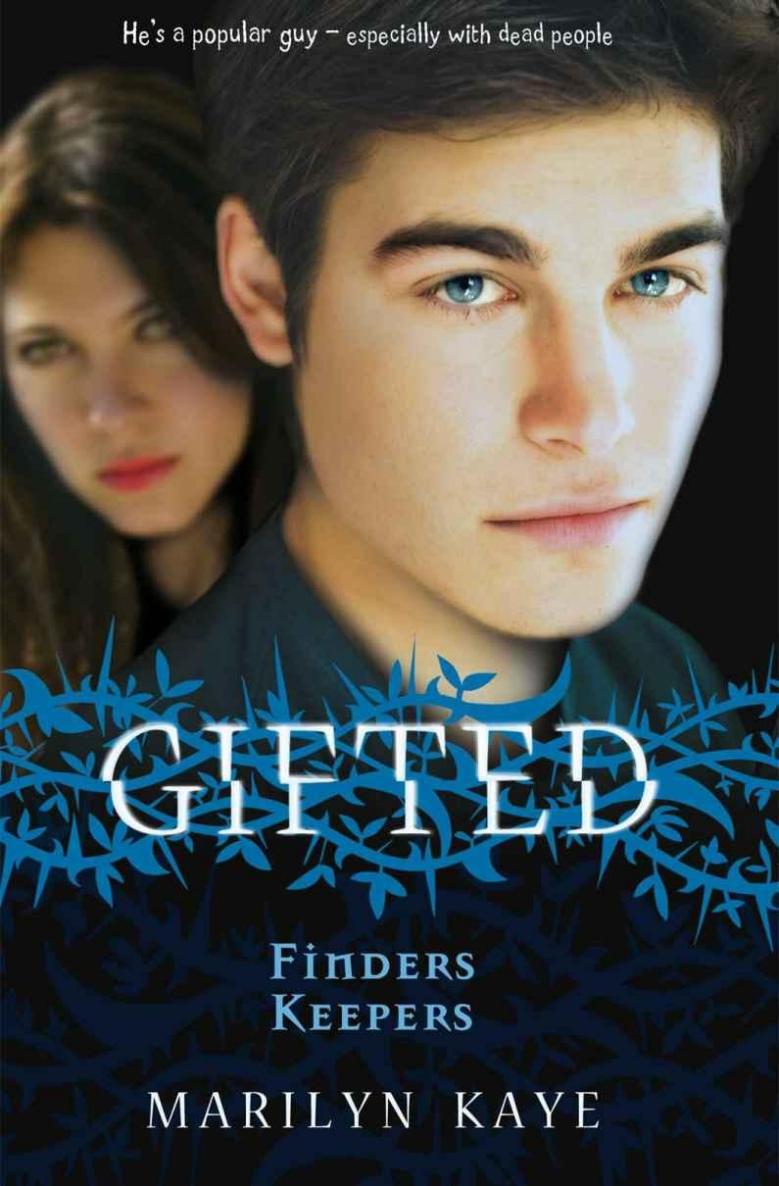 Marilyn Kaye is a bestselling American author. Her Replica series was an international success. Her other series include Camp Sunnyside Friends, After School Club, Out of This World and Last on Earth. She lives in Paris.

Gifted: Out of Sight, Out of Mind 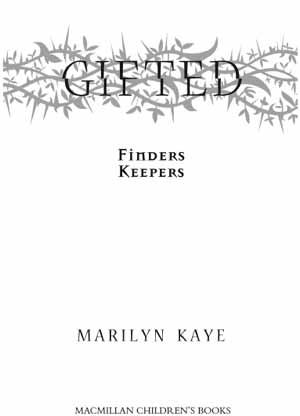 The right of Marilyn Kaye to be identified as the author of this work has been asserted by her in accordance with the Copyright, Designs and Patents Act 1988.

For my god-daughter, Rose, her brother, Marius, and their parents, Isabelle Benech and Laurent Loiseau, with love

K
EN WAS TRYING TO ignore the voice in his head.

Everyone else in the room was involved in a lively debate with Madame, their teacher. His classmates were paying attention, and they actually looked interested. Even Jenna Kelley, who generally affected an expression of boredom, was getting into it.

‘What’s the big deal, Madame? OK, so maybe there are bad guys out there who want to get their hands on us. But we can take care of ourselves. We’re gifted, for crying out loud!’

‘Yes, you have gifts,’ Madame responded patiently, ‘but you don’t know how to use them properly.’

Sarah spoke softly. ‘Wouldn’t it be better if we just didn’t use them at all?’

‘And let the bad guys use them?’ Charles asked. ‘No way. We have to fight back!’

‘Couldn’t we just stay away from the bad guys?’ Emily wanted to know.

‘That’s easier said than done,’ Tracey pointed out. ‘I’m with Charles. We have to be prepared to do battle.’

Madame was getting frustrated. ‘But you can’t go to battle when you don’t know how to use your weapons!’

Ken wanted to be a part of this argument – to listen and maybe even join in. But how could he participate when some old dead guy was yelling at him?

Listen, kid, ya gotta help me! Talk to my granddaughter – make her see some sense. If she marries that no-good scoundrel, she’ll regret it for the rest of her life!

Nobody else could hear the man – only Ken. This was his so-called gift. And he hated it.

This voice was louder than most of the voices he heard. Ken thought maybe the man was hard of hearing. His own grandfather couldn’t hear very well and he talked really loud. Ken had to yell back at him to be heard.

At least with
this
old guy Ken wouldn’t have to yell. He only had to think his response and the man would hear him. Ken didn’t understand how this wordless communication worked. It was just the way it happened.

He ‘spoke’ to the man.
Look, I’m sorry, but I can’t help you out. I don’t even know your granddaughter.

The man replied,
I’ll give you her address.

Ken wondered if the man could hear his silent groan. He didn’t know what else to tell him. With other voices he could be tough, even rude, ordering them to leave him alone and get out of his head. But how could he be nasty and disrespectful to an old man?

This voice was coming from outside his head. Madame spoke sharply, and to Ken’s relief her stern tone drove the dead grandfather away.

‘Are you listening, Ken? We’re talking about something important.’

‘I’m
trying
to listen,’ he replied.

Her stern expression softened slightly. ‘Is someone bothering you?’

‘Good. Then pay attention, because this concerns all of you. Surely by now you’ve all realized that there are forces in this world who present a grave threat to you. Be aware. Be alert. And never, never let anyone know what you’re capable of doing.’

From the corner of his eye, Ken saw Amanda yawn. She politely covered her mouth with her hand, but she was directly in Madame’s line of vision and the teacher saw her.

‘Am I boring you, Amanda?’ she asked, making no effort to hide the annoyance in her tone.

‘No, Madame. I just have something else on my mind. Something I need to tell the class.’

‘And I’m sure it’s something very important,’ Madame said smoothly. ‘You’ll be able share it with us later. Right now, I need your full attention. It’s very important that you all realize how your gifts could be exploited. I don’t want to frighten you, but you need to be aware of the danger. Do you understand this?’

Madame frowned. ‘Jenna, I’ve told you again and again, you are
not
to read minds in this class.’ Her eyes shifted to Amanda. ‘And I am
not
exaggerating. Perhaps some of you need to recall some recent events. Emily? Emily!’

Ken knew Emily couldn’t use hearing voices as an excuse for not paying attention. She was just daydreaming. Not like an ordinary daydreamer might though. Emily’s dreams had a disturbing tendency to come true.

‘Emily!’ Madame barked. ‘Would you mind not thinking about the future and joining us in the present?’

‘Remind the class of the potential dangers they could encounter.’

‘Why me?’ Emily asked plaintively.

‘Because, if I’m not mistaken, you were the first to encounter a real threat this year.’

Madame was rarely mistaken, and Emily knew this. Still, she looked confused. From behind her, Jenna poked her shoulder.

‘Serena Hancock, Em. Does the name ring a bell?’

Emily slumped back in her seat. ‘Oh, right. The student teacher.’

‘Would you remind the class what Serena did to you?’ Madame asked.

Emily was clearly uncomfortable, but she obeyed. ‘She hypnotized me and tried to make me tell her the winning lottery numbers for the next draw.’

‘And why did Serena choose you as her victim?’ Madame prompted her. ‘Why didn’t she threaten Jenna, for example, or Sarah?’

Emily sighed. ‘Because she knew I could see into the future.’

‘Precisely,’ Madame declared. ‘She knew what you could do, and she wanted to exploit this. Let’s move on to another example of a recent threat.’ She looked pointedly at Jenna.

Madame spoke briskly. ‘I know it’s a painful memory, Jenna, but it’s important that we remember.’

Ken caught Amanda’s eye, and they exchanged knowing looks. This was so Jenna – to act tough, like nothing could really upset her. Not even a man showing up out of nowhere and claiming to be the father who had disappeared before Jenna was even born. Not even when this man turned out to be a fraud, someone who wanted to use Jenna’s mind-reading skills to win a lot of money at poker.

‘I disagree,’ Madame said. ‘What threatens one of us threatens all of us. I cannot stress this enough. We need to think of ourselves as a team.’

Ken hoped his own reaction to that notion didn’t show in his expression. He respected Madame and all that, but to call this class a team – that was completely bogus. Ken knew all about teams – as an athlete he’d played on lots of them, including Meadowbrook’s soccer team. And he’d been on teams in other classes – working on science projects, stuff like that. Being on a team meant being connected in some way, working together towards a common goal. Looking around this room, he couldn’t imagine working with any of his classmates. And he certainly didn’t feel connected to any of them. Even without the gifts, they had nothing in common. Jenna was a sullen goth-girl with a less-than-stellar reputation. Amanda was a super-popular queen bee. Even though he wasn’t involved in playing football any more, Ken still considered himself a jock. There was no one else in the class who was even interested in sport.

The Dylanologists by David Kinney
Only the Good Die Young by George Helman
Looking for Love by Kathy Bosman
Suite 269 by Christine Zolendz
Blackstone and the New World by Sally Spencer
His Texas Bride by Deb Kastner
Primal Bonds by Jennifer Ashley
Under the Jaguar Sun by Italo Calvino
Fire and Ice by Nell Harding
Dogs of War MC Episode 6 by Rossi, Monica