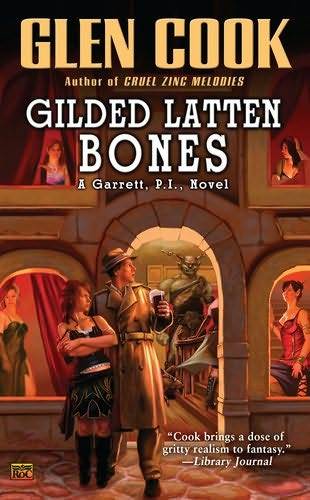 For Garrett, P. I., loyalty and love come a close second to survival... Garrett’s attempt at domestic bliss with the fiery Tinnie Tate is sidetracked when he waylays a pair of home intruders and learns they’ve been paid by an unknown source to kidnap Tinnie. But as Garrett rushes to find out who is trying to push his buttons, his best friend is attacked. Now, Garrett has to track down both malefactors. Unless they’re really one and the same-in which case Garrett might be next...

Praise for the Garrett, P.
I., Novels

“A wild science fiction mystery that never slows down for a moment.”

“Garrett, private detective, returns after too long an absence.... Cook makes this blending of fantasy with hard-boiled-detective story seem easy, which it isn’t, and manages to balance the requirements of both genres superbly.”

“Cook brings a dose of gritty realism to fantasy.”

The Garrett, P.
I., Series by Glen Cook 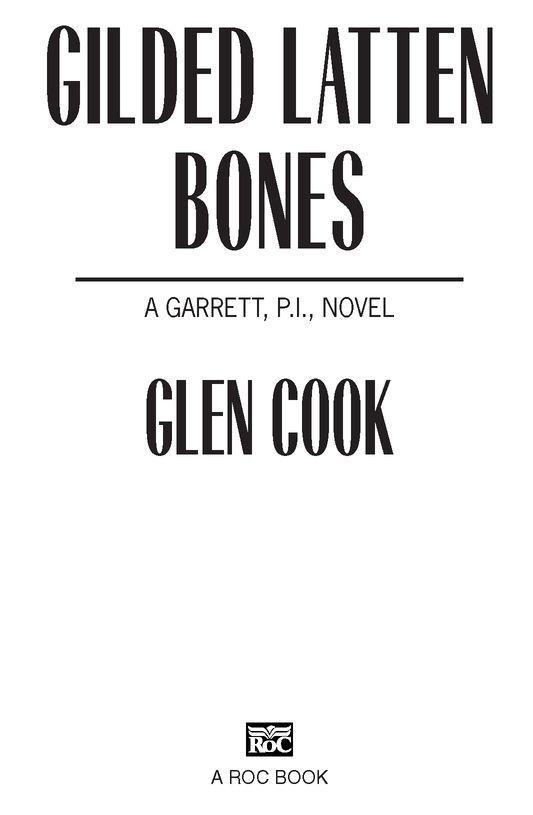 First published by Roc, an imprint of New American Library,

For a long time it always started with a beautiful woman at the door, sometimes in the middle of the night. That had ended. Good things do. I wasn’t in that racket anymore. There was only one beautiful woman for me. She was on my side of the door already.

Tinnie Tate. Tinnie had wreaked all sorts of changes in my life.

Tinnie had the word out: Garrett, that most marvelous specimen of former Marine, was no longer one of TunFaire’s serious players, however you cared to define that term. Mama Garrett’s boy was now devoutly monogamous. He reserved his vast professional acumen for the benefit of the Weider brewing empire and, more importantly, for that of the Amalgamated Manufacturing Combine. The man hadn’t hit the mean streets in a rat’s age. Which was pleasing to many and unpopular with a much smaller crowd.

Bottom-feeders and parasites really liked the new Garrett. He was out of their lives. The reverse was true for workmen at the breweries and Amalgamated. Garrett had this habit of turning up just when some underpaid and underappreciated genius was about to enhance his income by reassigning ownership of company property.

—
a stunning redhead bereft of any perspective other than her own. She gouged me in the ribs with a specially sharpened fingernail. “Wake up, Malsquando.”

“Again? What? Are you trying to set a new record?”

“We’ll work on that tomorrow night. We have another problem, now. There’s somebody downstairs.”

We lived in two-story quarters we had carved out of a little-used part of the Amalgamated Manufactory Annex. Something rattled down below, followed by a vague, exasperated curse.

I was awake now, my head filling with subjects I might offer for discussion once we got out of whatever this was. Like maybe the fact that this situation could not have come up had we made our nest at my house.

I was like liquid getting out of bed. Silently flowing. Not even a gurgle. I armed myself with an oaken head knocker that no amount of fussing or whining had compelled me to divorce.

The bedroom door opened with a faint creak. I was behind it, wound up. The villain entering carried a damped-down lantern. That cast just enough light for someone whose night vision had fully adapted. It revealed Tinnie lying there mostly uncovered and wearing nothing, apparently asleep. An impressive sight, I’ve got to admit.

Lucky me, I’d seen it enough not to be distracted. Much.

“There’s something wrong here, Butch.” The whisperer leaned in just far enough to offer the back of his mostly bald head.

I seized the day, whacked that mole. Down he went. I spun around the edge of the door

—
to stare down the length of twelve pounds of razor-edged steel. I couldn’t imagine anybody having forged a sword that big. The eyes behind that monster did not belong to somebody in a merciful mood, nor even somebody truly sane.