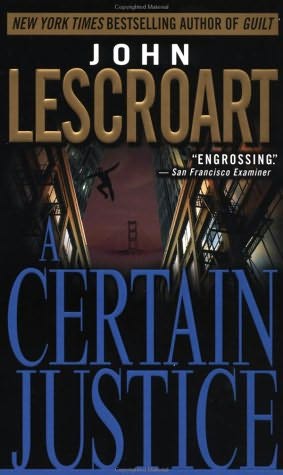 "Our progress in degeneracy appears to me to be pretty rapid."

"To those white people who have whatever hang-ups they have, get over it."

"Pain reaches the heart with electrical speed, but
truth
moves to the heart as slowly as a glacier."

At about eight-ten on an unusually hot and sultry Monday evening a couple of weeks before the Fourth of July, Michael Mullen, a thirty-nine-year-old white accountant with a wife and three children all under eight, stopped his new black Honda Prelude at the corner of 19th and Dolores in the outer Noe Valley District of San Francisco. Dolores is a divided street with a wide grassy area occasionally pocked with trees between the north and south lanes.

According to witnesses, a young black male was walking in this divider strip when Mullen pulled up to the stop sign at 19th. The driver immediately behind Mullen, a kid named Josh Cane, noticed that, with the heat, Mullen had his driver's window open, his elbow sticking out resting on it.

The young man in the divider strip, who'd been walking north, the same direction both Mullen and Cane had been driving, closed the remaining feet between himself and Mullen in a couple of athletic bounds, 'like he was jumping over some mud or something.' (Rayanne Jonas, fifty-six, an African-American day-care provider, walking home from the center on Army, where she worked.)

'I saw he was already holding something, which then, I mean at that time, I thought was a pipe, and then I realized.'

It turned out it was a gun, which the man stuck into Mullen's temple. He pulled the trigger. The report was loud enough that Cane – in his car with
his
windows up and his air conditioner blasting – heard it 'like a crack of thunder.'

The only witness with the wherewithal to move in the following seconds, to try to do anything at all, was a fifteen-year-old Hispanic youth named Luis Santillo, who was on
his
way home from his after-school job at the fast-food place down the street on 16th and Guerrero. He, too, saw the athletic man take the leaps, aim the gun, and fire.

'Hey!' he yelled. 'What the hell...' He started running toward Mullen's car.

Meanwhile, ignoring Luis and everything else, the assailant pulled the door of the car, reached in, grabbed, and with one hand pulled Mullen out, lifted his wallet, and dumped his body on the street.

Luis, twenty feet in front of the car and still coming, still yelling, froze as the vehicle accelerated, the driver's door swinging half-open.
The car fishtailed slightly on the pavement, corrected, then jumped forward through the intersection, its left bumper hitting Luis, bouncing him first off the hood and windshield, and then throwing him seventy-six feet into a juniper bush in the divider strip, which saved his life, although the pins in his hip would probably prevent him from ever jumping athletically like the shooter.

The car, gaining speed, 'went off like a rocket, just going and going 'til it was out of sight.' (Riley Willson, a car mechanic at his own shop, Riley's Garage, on the northeast corner of 19th and Dolores).

On June 19, the car – or what was left of it – was recovered. Its doors were gone, as were the tires. The body had been tagged by what must have been every kid with a can of spray paint in the neighborhood. The car had been abandoned on Moscow Street hard by the Crocker-Amazon Playground, a common dump spot south of the 280 Freeway, almost to the city limits.

Besides the traces of cocaine, marijuana seeds and roaches, beer cans and other debris, the car yielded such a beautiful fingerprint – in blood – on the back side of the steering wheel, that Shawanda Mboto, the San Francisco Police Department specialist in these matters, let out a warwhoop from her perch by her microscope.

It took less than a day to verify that the blood was in fact Michael Mullen's. The fingerprint belonged to an African-American career criminal named Jerohm Reese.

Jerohm Reese was twenty years old. He had first visited the Youth Guidance Center at the age of fourteen when, without a regular domicile, he was convicted in juvenile court of stealing a pair of Air Jordan tennis shoes from Ronda Predeaux after he had beaten him up.

His 'accomplice' in that crime – the boy who had held Ronda down by kneeling on his upper arms and pounding away at his face while his shoes were stripped off – was another youth, Wesley Ames, better known as Tooth because he only had one left on the top, right up-front.

Over the next four years Jerohm Reese acquired a juvenile rap sheet, mostly stealing and, when he needed to, doing some minor violence, often with his fists, although once he used a metal pipe and once a rock.

He spent his eighteenth birthday in a courtroom. Though Jerohm had not yet turned eighteen when he robbed the Portola Liquor Store on Ocean, this time he had had a gun in his possession, which on his arrest he said had been a toy. (Jerohm's toy – never located – had given a concussion to Meyer Goldsmith, the owner.)

Jerohm's public defender, Gina Roake, had prevailed with her argument for leniency, on the grounds that technically this was Jerohm's first offense
(as an adult)
. Whether persuaded by this argument or exhausted at the end of another long day at the bench, Municipal Court Judge Thomas Langan had sent Jerohm upstairs to the county jail for a year, of which, due to the overpopulation of the jail, he served five months and twenty-one days.

Between the ages of eighteen-and-a-half, when he got out of jail on the Portola robbery, and twenty, when his bloody fingerprint was identified on Michael Mullen's steering wheel, Jerohm kept a low profile, and though he was brought to the Hall and questioned several times, he was charged with no new crimes.

Although Jerohm lived and hung out mostly in the Bay View district between Hunter's Point and Candlestick Park – one of the coldest and most inhospitable environments in the state – at about midnight on June 21-22 he was arrested by an African-American inspector sergeant of homicide named Ridley Banks as he exited the Kit Kat Klub just north of Laguna, a long walk from Candlestick, after his presence had been reported by that establishment's owner, Mo-Mo House, who had some sort of arrangement with Sergeant Banks. Accustomed to the drill, Jerohm offered no resistance.

A search of Jerohm's given address, an apartment he shared with an eighteen-year-old unemployed hairdresser named Carryl Joyner and her two-year-old Damien, turned up one of Michael Mullen's credit cards.

Jerohm professed ignorance as to how the credit card had come to rest between the cushions of his couch, saying that maybe it had fallen out of the pocket of his friend, Tooth, when he'd been visiting. Tooth, sadly, had died a few days ago when he had gotten hold of some extra pure Mexican brown heroin and mixed up a speedball with it. That's how Jerohm's fingerprint must have gotten onto the steering wheel, said Jerohm. Thinking it had been Tooth's car, Jerohm had had to drive Tooth home in it that night – the man was really messed up and his woman would kill him if he spent the night out again. Jerohm hadn't noticed the blood – it must have been on the seat or something, got transferred to his finger.

Two days after Jerohm's arrest, a Friday, he took part in four separate police line-ups. On the good side of the glass, on these four occasions, respectively, sat Josh Cane, who had been the driver behind Michael Mullen; Rayanne Jonas, the day-care provider; Luis Santillo, still in a cast with a bandage wrapped around his head; and Riley Willson of Riley's Garage.

All of the witnesses picked out Jerohm Reese as the one who looked the most like the shooter. None, however, could be one hundred percent certain it was him. The man who had hijacked Michael Mullen's car had been tall, like Jerohm, and had appeared to be well-muscled and athletic, like Jerohm. But he had also been bearded, and Jerohm today was clean-shaven (had been, he said, for months). Further, the man had been wearing a sleeveless down jacket, which may have made him look more puffed-up than he had actually been. Finally, after eight on a muggy June night, the waning light wasn't any too good. None of the witnesses could be sure.

Even without the eyewitnesses, however, the incident report and record of arrest went down one flight to the office of the district attorney. Inspector Banks was interviewing other potential witnesses, people who might remember, for example, whether Jerohm had worn a beard recently, people who could perhaps place Tooth in an alternate locale at the time of the crime – normal, dogged, police procedural work.

On the following Tuesday, June 28, District Attorney Christopher Locke announced that his office was declining to charge Jerohm Reese with the hijacking of Michael Mullen's car and the murder of Michael Mullen. There was no way, he said, that the charge could be proved in the absence of compelling eyewitness testimony. The credit card and the fingerprint were explainable, especially given that Tooth's residence was within three blocks of the Crocker-Amazon Playground and his prints, too, were all over the car's front seat, along with ten others'.

Jerohm was ordered released from jail, and signed out on Tuesday afternoon at two twenty-eight. He waited until after they had served lunch.

A large drinking crowd was gathering at the Cavern Tavern, a workingman's bar in the Richmond District of San Francisco. Jerohm Reese's victim, the CPA Michael Mullen, had been a regular at the Cavern – he'd been that establishment's accountant – and June 28 would have been his fortieth birthday. The management of the pub decided they were going to say goodbye to Mike their own way – they'd have a party for their boy.

Mike's younger brother Brandon, a thirty-five-year-old telephone repairman who had taken the day off, and his cousin and best friend, Peter McKay, currently between jobs, hadn't had any luck getting Mullen's widow, Paula, down to the Cavern. She'd had her fill of Irish wakes, the rites of burial, drinking. Mostly she was already sick of her grief, and what she wanted was to get back to her normal life with her children, which, she was beginning to suspect, was never going to happen.

Brandon Mullen and Peter McKay were depressed enough about Mike's senseless death, but Paula's refusal to accompany them to the Cavern's special memorial had put them into even blacker moods. Mike's own wife!

There was a huge head shot of Mike blown-up against the dart wall and this reinforced their loss – their brother and friend was gone. Goddamn, pour some whiskey.

The Cavern's oval-shaped bar ran the center of the room, and Jamie O'Toole wasn't letting any of the regulars buy a drink. This was the Cavern's wake, for its patrons, and the place was plannin' on losin' its ass tonight, thanks. It was the least they could do for Mikey.

By eight forty-five, close to sixty men had poured into the Cavern – ready to get half-tanked coming in after their wives and kids and supper, or hot and sweaty and thirsty from their daytime jobs on construction sites, body shops, road crews. Jamie O'Toole poured and they raised their glasses to the poster-sized photograph of Mike Mullen's smiling mug.