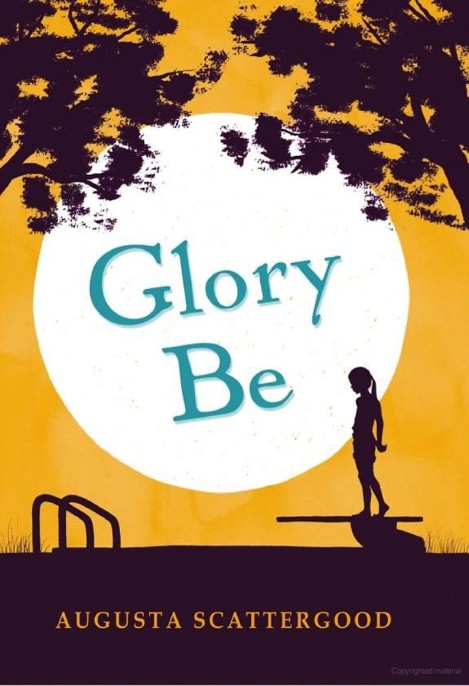 For Jane, my own sister and friend.

And for Ivy and Kate and Jay, with appreciation.

Four
Me and Emma and Nancy Drew

Eight
Letters to the
Tribune

Nine
A Firecracker Blew Off His Finger

Fourteen
Trying to Breathe Under a Blanket

Eighteen
The Storm on Sunday

Twenty
If I Lived to Be a Hundred

Twenty-two
A Heap of Trouble

Twenty-three
For Dang Sure

Twenty-five
Black and Blue and Ugly

Twenty-eight
A Tornado Went Through

Twenty-nine
A Smile as Big as Mississippi

Thirty-one
What All I Learned This Summer

We needed to hurry.

Franklin Cletus Smith has been my best friend since we hunted doodlebugs together in my backyard. Some people call him Frankfurter ’cause he’s got hair the color of a hot dog. I call him Frankie. I squinted down the sidewalk, and finally here he came, dragging his towel with his bathing suit hiked way up.

“It’s a million degrees out here. I’ve been waiting forever.”

I stood up and grabbed my swimming bag. “Where’ve you been?”

“I cut through Mrs. Simpson’s backyard.” He wiped
the sweat off his glasses with the bottom of his T-shirt. “Then I had to turn around and run down the alley when her mangy old hound dog took off after me.”

“Some dogs run forty miles an hour.” He announced that like it was the gospel truth. Frankie was always saying stuff that sounded like it came straight from his World Book Encyclopedia.

“Let’s go,” I said. “It’s so hot I can’t hardly spit. Jesslyn’s already at the pool. She might up and decide she’s bored, and leave before I put my big toe in the water.”

I scratched at a mosquito bite and tugged at the bathing suit under my shorts. The backs of my legs were burning up from sitting on the concrete bench outside the library. I couldn’t wait to feel the water’s coolness, to dive in and flutter-kick all the way to the shallow end.

Frankie yanked at his towel. “I hope the pool’s even open,” he mumbled.

“Wait a minute,” I said. “It’ll be open. I’m going swimming. Why would they close the Community Pool now, when everybody needs a place to swim?”

“I heard something.” He stared up at a noisy mockingbird perched in the shade tree in front of the library. Anybody watching Frankie would have sworn that mockingbird was the most interesting critter in the universe. “About cracks needing fixing.”

“Nobody’s closing our pool. Where’d you hear that?”

“My daddy. But it’s a secret,” Frankie answered, and headed off like he hadn’t said a thing.

“Your daddy? What does he know?” I raced after him, all the time thinking why in tarnation would our pool be closing on the hottest day of the summer, just twelve days before the Fourth of July, my twelfth birthday? And what was the big secret anyhow?

“S
ee there, Frankie. Your daddy doesn’t know everything. Still open.” I read the sign on the fence gate for the umpteenth time. “You suppose they’ll ever change
that rule that makes my bossy big sister in charge? Jesslyn can’t swim half as good as me. Just because she’s fourteen — and I’m only eleven — what difference does it make?”

“You know, Glory, nobody has to know how old you are. You can sneak in.” Frankie looked around to see if anybody was watching us. “Like me.”

“Not hardly. Since my daddy’s been the preacher at First Fellowship United Church for my whole entire lifetime, half the people in this town know how old I am.” I untangled a quarter from my bathing cap and dropped it on the sign-in table. “Let’s go,” I said, and followed Frankie to our special place near the back fence. We sat down on the grass.

I flipped my tennis shoes to the side of my towel and looked out at the pool. Eight ladies floated on their backs in a big circle, one foot in the air, then another, kicking away to some older-than-the-hills song blasting from the loudspeaker. “Look at that. The Esthers, hogging the pool again. Jesslyn says Mrs. Simpson named them after a movie star.”

“My brother says Old Lady Simpson acts like she’s the boss of the Community Pool.” Frankie put his Archie funny book down and nodded toward the swimmers.
“All those ladies have green hair, you know.”

Before he could quote from his fifth-grade science book about why chlorine turns hair green, I yelled, “Last one in’s a monkey’s uncle,” and jumped up.

Frankie set his eyeglasses in his shoe for safekeeping. He took off the black-and-gold lanyard with a whistle hanging from it and laid it on top of his towel. Then Frankie fiddled with his swim goggles, and fastened on his pink plastic nose clip. Finally he slid into the pool, feet first.

I dived in the deep end, flutter-kicked over to Jesslyn, then climbed up the ladder. When I got out of the pool, I stood close enough to drip on her. “Hey, sis. I’m here.”

Jesslyn turned from her pep squad friends. “I see you. Please move. You’re blocking my sun.” She slathered baby oil on her arm.

“Want a hot dog from the snack bar?” I asked. “I’ll get you one. And french fries.” Jesslyn looked at me like I’d offered her liver with onions.

Last summer, my sister taught me to hold my breath and swim the entire length of the pool underwater. Back then we sat on the same big towel while she painted my toenails pink. Not this summer. This summer Jesslyn is fed up with me.

I cannonballed back in, splashing Jesslyn and her snippy friends. When I got out, I headed for my towel. “Come on, Frankie,” I told him. “We got us some spying to do.”

Even underneath our favorite shade tree, it was so hot you couldn’t hardly breathe. But when Jesslyn and her friends started whispering, and words like
cute boy
and
football player
and
two-piece bathing suit
drifted my way, I scooted my towel out from under that tree to get closer. They gossiped about her friend Mary Louise’s party and talked about some new boy in town that Jesslyn seemed real interested in. The way those girls were studying their fancy-colored toenails, you would’ve thought they were paintings hanging in a museum.

When Frankie’s brother, J.T. Smith, Mr. Football Hero, showed up, the toenail studying ended. Every single one of Jesslyn’s pep squad friends started giggling and carrying on. Even with the sun beating down, J.T. had his varsity letter sweater slung over his shoulders. No swimming suit. I guess he was too good to go near the water. He had a toothpick hanging out of his mouth, a football under his arm, and the fiercest look on his face.

Frankie jumped up and ran over to where J.T. was. Maybe he thought his mean big brother was gonna make
those boys playing Marco Polo, splashing left and right under the diving board, ask him to join in. Fat chance they’d let Frankfurter Smith play, even
if
his brother’s the Hanging Moss Hornets’ biggest star.

“You girls better enjoy this while you can.” J.T. nodded toward the pool. He was grinning bigger than a cat trapping a mouse. “By next week, it’ll be closed.”

Jesslyn propped herself up on her elbows to look out at the turquoise water. “Closed? In the middle of the summer? You don’t know what you’re talking about, J.T.”

“I know exactly what I’m talking about” was all he said.

When I heard that, I couldn’t stop myself. I stormed over to Jesslyn. “Nobody will close our pool. It’s almost July Fourth, the big parade and all.” I started to say how it was my birthday and I’d had swimming parties here since I was little. But I didn’t. I glared at Frankie’s brother. “Why are you lying about our pool?”

J.T. spit out his toothpick and slicked back his black hair. “I ain’t lying. You can blame it on them Freedom Workers. Those people from up North, in town to help the coloreds vote and swim in our pool. We don’t need outside agitators down here making up new rules.” J.T. started to move away from us. He was ending the conversation.

Jesslyn followed J.T. toward the gate, and I was right behind her. Her voice got so loud two lifeguards looked down. “Outside agitators? Do you even know what that means? You’re just using big words. Before you start saying bad stuff about people, you should find out who these so-called outside agitators really are.”

My stomach did a belly flop. Whatever an
outside agitator
was, it didn’t sound good. I didn’t understand what they were arguing about.

“Well, if you want to swim next to a colored person, go on ahead,” J.T. hollered back at Jesslyn. “While you’re at it, why don’t you just hightail it across town to swim in their crummy pool?”

“Maybe I will,” Jesslyn answered, quietly this time. But by now the entire pep squad was listening.

“What are you talking about, J.T.?” I looked up at him standing there, smiling to beat the band. “You don’t know a thing.”

“That’s what you think,” he answered. Then he strolled out of the pool gate like he owned the place.

For a minute everything got so still it felt like the entire Hanging Moss Community Pool was holding its breath, listening. After a while it was swimming pool noises again — mamas calling children, lifeguards’
whistles, radios fighting with each other to see which one could make the most racket. Everything back to normal, seemed like.

I turned to Frankie. “Is something broken? Is that what you meant when you said the pool might be closing to fix stuff? Like a crack in the cement? Must be a teensy crack, right? Or that fence over by our mimosa tree? It’s been broken ever since I can remember.”

“Daddy told us it was closing,” he answered. “My daddy’s on the Town Council, you know.”

“Yeah, well, as the preacher at First Fellowship my daddy knows as much as any old Town Council. He never said anything about this pool closing in the middle of the summer.”

I kneeled down to peer into the pool water gurgling near the drains. Bobby pins, long hair, pink chewed-up bubble gum. No cracks.

I was trying not to care about swimming and splashing every single day for the rest of the summer in the cool water with Frankie, my one true friend. Or whether it mattered that Jesslyn just might be the laughingstock of the Hanging Moss Community Pool for hollering at Frankie’s brother. Listening to J.T. talk just now, all the fun had drained right out of the Community Pool.