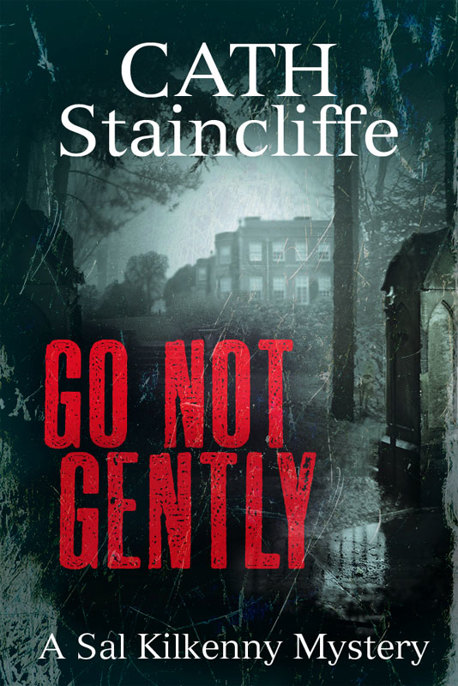 Cath Staincliffe
is the author of the acclaimed Sal Kilkenny mysteries as well as being creator of ITV’s hit police series,
Blue Murder
, starring Caroline Quentin as DCI Janine Lewis. Cath was shortlisted for the CWA Dagger in the Library award in 2006. She lives in Manchester with her family.

In the Heart of the City
Violation

This ebook edition published in the UK by Robinson,
an imprint of Constable & Robinson Ltd, 2012

The right of Cath Staincliffe to be identified as the author of this work has been asserted by her in accordance with the Copyright, Designs and Patents Act 1988

Thank you to all the people who helped me to write this book: to Dr Debra Bradley, Peter Parish MD, Lavinia Payne, and Dr Mark Perry, for answering my particular scientific and medical queries; to the novel-writing group, Christina, Maggie, Marion, and Natasha, for support, criticism and hugely enjoyable discussions; to all the readers who asked how I was getting on; and to Mike for solving the various mysteries that my computer dreams up.

Table of Contents
CHAPTER ONE

‘I’m concerned about her,’ she was saying, ‘she’s so…’ the patina of lines on her face creased into a frown as she groped for the word she wanted, ‘distant. She’s losing interest.’ Her voice rose in agitation. ‘It’s not like Lily.’

Agnes Donlan was beautiful. And very old. Clean, airy white hair framed her face. Not the sort of colour you could get out of a bottle. White teeth too, very even, probably not her own.

‘How long has she been there?’ I pulled my notebook closer to jot things down.

‘Eight weeks. She had the bad fall at the beginning of October and she was in the week before Christmas. It was all such a rush. She’d made up her mind. I was against it. Once you leave your own home, your independence…’  She left the sentence hanging, its implication clear.

‘So her decline could well be due to the move?’

Agnes fiddled with the jet brooch on her coat. ‘Oh, I don’t know. If that was it, then, well,’ she spread her hands, palms up, ‘I’d just have to accept it, but…’

She couldn’t bring herself to say it aloud.

‘Listen, Miss Donlan.’ I leant back and made eye contact. Her eyes were a deep blue, almost navy, like her coat. ‘If I’m to help I need to know exactly what’s worrying you. What you’d like me to do.’

‘It sounds so melodramatic,’ she protested.

I smiled. ‘Everything between us is completely confidential. If I think the case is ridiculous, a waste of my time and your money, I’ll say so.’

‘Good. It’s so hard to know.’ She took a breath and straightened up in the chair. ‘Very well. I’m concerned,’ she spoke slowly, choosing her words with care, ‘that Lily’s health is being affected, that something in that place is making her ill.’ Her composure wobbled as she voiced her fears, and tears glistened in her eyes. She blinked them away. ‘It sounds far fetched, doesn’t it?’

‘No. You may be right. We’d need to find out about conditions there, try to discover whether there’s anything practical that can be done to improve her care. Sort out whether it’s the upset of moving that’s unsettled her or something else. Has Mrs Palmer got a social worker?’

Agnes nodded. ‘There was someone helped with the move, I think. The doctor sent them.’

‘Well, perhaps you can talk to them first.’

‘Oh, I don’t feel I can, you see. I did talk to Mrs Knight, she’s the matron. She said we just had to accept it, she said Lily was starting with Alzheimer’s or something similar.’

‘It’s been so sudden. Everything I’ve read or heard suggests it comes on gradually. I can’t just leave it like this. I feel I owe it to Lily to do something.’

I nodded. Considered what she’d said. Perhaps this visit to me was her way of refusing to face reality. Her reluctance to accept her friend’s rapid decline. Without further investigation it was hard to make a judgement.

I suggested to Agnes that we arrange a visit to Homelea once I’d done a little research to establish whether Lily’s symptoms were par for the course. The initial visit would be free of charge and afterwards I would advise her whether to retain my services or not. She agreed and thanked me, relief relaxing her shoulders as she sat back in the chair.

Twenty minutes later I followed Agnes up the stairs to the ground floor. I rent office space in the cellar of the Dobsons’ family home, round the corner from my own house. When I first set up business, I went knocking on neighbours’ doors to find a room; the Dobsons were happy to take me in and it’s worked out well. It’s basic accommodation, to say the least, but I pay a peppercorn rent for it, which is all my irregular income runs to.

She got a plastic rain hood from her bag. I opened the door. She tilted her head at the steady drizzle. ‘They forecast rain.’ She tied the hood under her chin. ‘Thank you.’ She pulled on her gloves.

‘Bye-bye,’ I replied. ‘I’ll be in touch later in the week and we can arrange that visit.’

I watched while she made her way down the path and along the street, her pace slow but assured. When she reached the corner she turned a little stiffly and raised her hand in farewell. I waved back and went in.

Down in the cellar I put the kettle on and recapped on the notes I’d made. Lily Palmer had been in Homelea Private Residential Nursing Home for two months. In that time, to quote her friend Agnes, ‘The life had gone out of her’. She’d lost weight, interest and seemed disoriented. She’d complained of headaches and palpitations. Sometimes she was drowsy and unresponsive, at others agitated, restless. She was often confused and forgetful.

When Agnes expressed her concern to Mrs Knight, the matron, she was invited in for a chat with Mrs Valley-Brown, the manager. Mrs Valley-Brown and her husband ran Homelea.

Matron took care of nursing those residents who needed it. Mrs Valley-Brown told Agnes that Lily had Alzheimer’s and that the doctor had prescribed a tranquilliser to help calm her down. If she responded well to the medication her behaviour would settle down, she’d be less distressed. They also had sleeping pills they could administer when needed as Lily had begun to suffer from insomnia, restlessness and occasional night incontinence. Lily was welcome to stay at Homelea as long as her behaviour didn’t adversely affect the other residents.

The kettle clicked off and I made myself a coffee, took it over to my desk. There’d been something a little strange at that point in the interview. I’d asked Agnes what would happen if Lily got much worse. Her hand flew to the jet brooch on her coat and she’d squeezed it tight. Otherwise, she completely ignored my question. A pause and then she began talking about Lily’s marriage. Something in my question had frightened Agnes. Fear of the death that might follow or the thought of increasing frailty? Whatever it was, I hadn’t got an answer.

I skimmed the rest of my notes. Lily had married, had a son and daughter. The girl had died in childhood but Charles lived down in Devon, visited twice a year, wrote monthly. He’d helped sort out the move to Homelea. Lily’s husband, George, had gone missing in action in the Far East in 1944. Once Charles left home Lily had worked as a secretary and book-keeper for a small firm. Since retirement she’d been fit and active. She’d fallen twice at home, fractured her wrist the first time and dislocated her shoulder the second. The move to Homelea had been at her own instigation. Apart from the shoulder and a certain nervousness about falling Lily had been fit as a fiddle when she left her own house for Homelea. There had been no sign of mental frailty then.

I tilted my chair back dangerously and made a survey of my office while I let the information trickle round my brain. The blind over the basement window was broken. Roller blinds are about as reliable as flip-top bins. The year planner that I’d put up the previous January in the hope it’d help me plan my time was still blank apart from school holidays. My sort of work doesn’t get planned. It’s all response and reaction. Go here, do this, try that, meet so-and-so.

The rest of the room was dusty but reasonably neat, shabby carpet, painted filing cabinet, a set of three dining chairs. A stack of reference books on a shelf, phone and answerphone, a pretty ceramic plate wall clock the only personal touch.

I tidied up the desk, switched the answerphone on and prepared to leave. I was at the Dobsons’ front door when I heard my office phone. I clattered down the stairs, flung myself at the desk and yanked the answerphone connection out of the socket, interrupting my recorded voice in mid-greeting. Pressing the off button never does any good; it’s one of those slow response – maybe I’ll do it this time maybe I won’t – models.

‘Oh.’ Confusion at the other end of the line. ‘Erm, I just thought…’ Laugh. Young, male, nervous. Either the answerphone, or the fact that I was a woman, had thrown him. Most people think Sal’s a man. My Yellow Pages ad is carefully worded. It says female detectives available but doesn’t imply it’s a one-woman show. No point in advertising for abusive calls and attracting all the headcases.

Wish he’d spit it out.  ‘I can offer an initial appointment, no obligation. You can discuss the matter with us, find out the sort of services we can offer and take it from there. Or I can offer free advice now if you want to talk about it over the phone.’

I plugged in the answerphone again hoping it wouldn’t take revenge at sudden disconnection by playing up and taking half-messages again, refusing to playback or to play the announcement, confusing people with uncomfortable silences and sequences of beeps. I sometimes spent hours searching for fragments of communication, whizzing the tape back and forth. I suppose the answerphone matched the window blind really. Crap. And not a true reflection of the quality of work I could offer.

To the Edge and Back [The Royal Wolves] (Siren Publishing Allure) by Honor James
Capital Risk by Lana Grayson
The Dash Diet Weight Loss Solution: 2 Weeks to Drop Pounds, Boost Metabolism, and Get Healthy (A DASH Diet Book) by Heller, Marla
Breathless 3 (Breathless #3) by Claire Adams
Passion and Affect by Laurie Colwin
Flesh and Blood by Jonathan Kellerman
Exiled - 01 by M. R. Merrick
Sword of Doom by James Jennewein
The Outcasts of 19 Schuyler Place by E.L. Konigsburg
Vampire's Thirst (The Awakening Series) by Garner, Cynthia