Read God Is Disappointed In You Online

God Is Disappointed In You 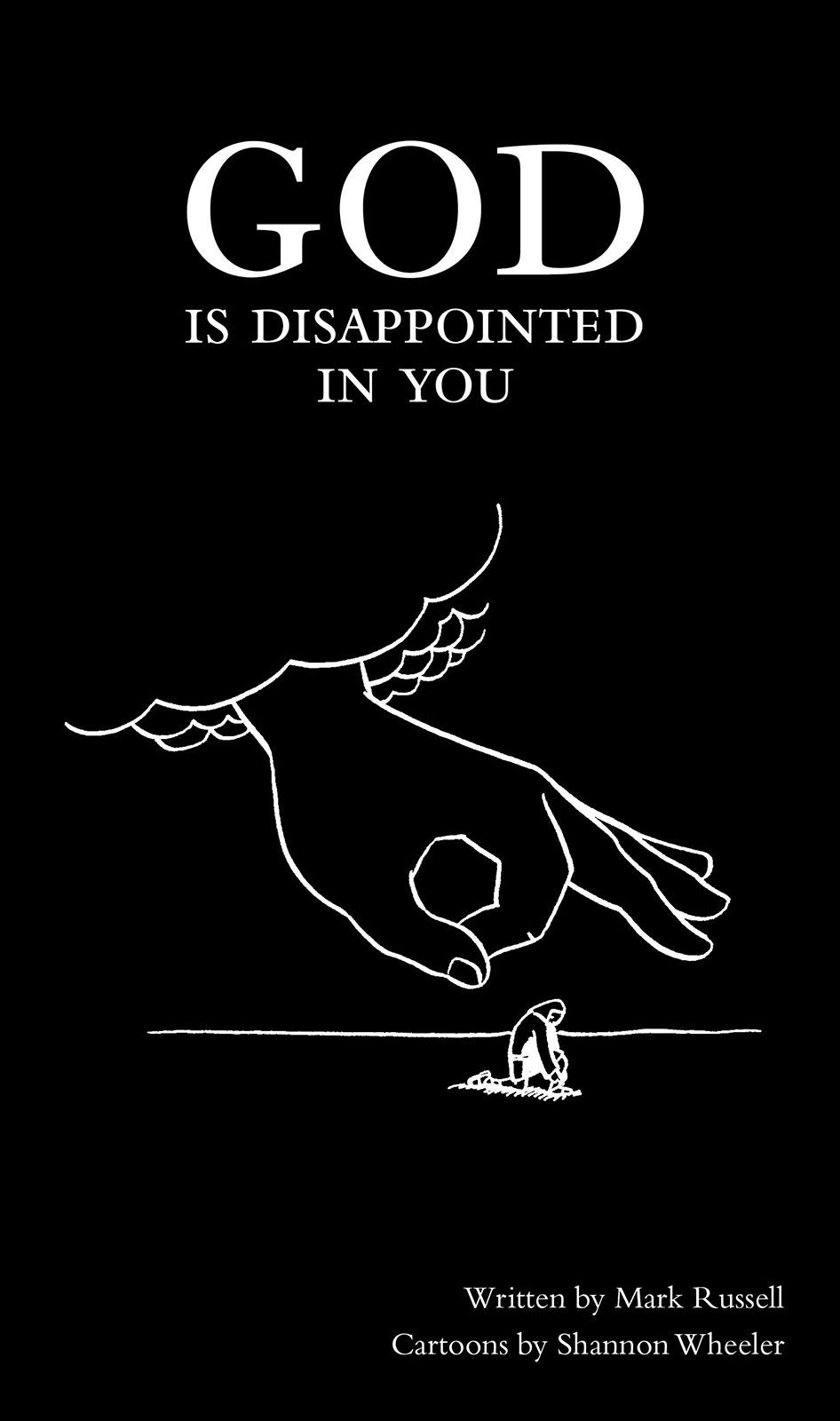 Part One: The Torah

The 1st Book of Samuel

The 2nd Book of Samuel

The 1st Book of Kings

The 2nd Book of Kings

The 1st Book of Chronicles

The 2nd Book of Chronicles

The Book of Job

The Book of Proverbs

Song of Songs (aka Song of Solomon)

The Gospel of Matthew

The Gospel of Mark

The Gospel of Luke

The Gospel of John

Part Seven: The Act and Letters of Paul

The Book of Acts

Paul’s Letter to the Romans

Paul’s 1st Letter to the Corinthians

Paul’s 2nd Letter to the Corinthians

Paul’s Letter to the Galatians

Paul’s Letter to the Ephesians

Paul’s Letter to the Philippians

Paul’s Letter to the Colossians

Paul’s 1st Letter to the Thessalonians

Paul’s 2nd Letter to the Thessalonians

Paul’s 1st Letter to the Timothy

Paul’s 2nd Letter to the Timothy

The Letter to the Hebrews

The Letter of James

The 1st Epistle of Peter

The 2nd Epistle of Peter

The 1st Letter of John

The 2nd Letter of John

The 3rd Letter of John

The Epistle of Jude

The Book of Revelation

GOD IS DISAPPOINTED IN YOU

Mark would like to thank Kalah Allen, Sarah Arndt, his support group at Writers Anonymous, and Nora Robertson, without whom this book would have never happened.

Shannon would like to thank his lucky stars for not getting hit by lightning (as did his mom).

Also, thanks to Patricia (who survived a lightning hit), Richard, Rani, Austin, Berkeley, Max, and baby. And finally a thanks to Mark for letting me be a part of this awesome project. I hope it doesn’t get us killed.

God Is Disappointed In You © 2013 Mark Russell and Shannon Wheeler.

Visit our online catalog at www.topshelfcomix.com.

The Bible may be the single most important book in human history. It has inspired no fewer than three of the world’s major religions. Four, if you count Mormons. People look to the Bible for guidance on everything from bombing another country to entering the cheese competition at the County Fair. But it’s my guess that of the more than a billion people who claim to live according to the teachings of the Bible, not too many of them know what the Bible actually says. They, like me prior to writing this book, probably only know the tiny morsel of the Bible that was spoon-fed to them in Sunday School. The rest of the Bible remains a sort of religious hot dog, something they eat on faith without having the first clue of what’s actually in it.

When I began this project, I quickly became astonished to realize just how little I actually knew about the Bible, despite growing up in church and attending Christian schools, where I was taught the Bible as part of a daily routine. How many stories my teachers had sanitized, omitted, or just gotten wrong. How many dark, hilarious, or truly profound passages the Bible contained that I was never taught, probably because all anyone really wanted me to learn was how to sit quietly, eat my carrots, and feel guilty.

Whatever the case, no one ever really taught me what the Bible was, or why I should love it. This is an oversight I hope to correct with this book. I give you the entire Bible, albeit condensed down to its very essence. I also tried to incorporate a little historical background to give what you’re about to read some much-needed context. It was my aim to take each of the sixty-six books of the Bible on its own terms, including the stories you were probably never meant to hear, and yet, eliminating all the interminable genealogies, arcane language and repetition that has probably kept you from reading the Bible yourself.

When reading this book, the first question to cross your mind will probably be, “Is this really in the Bible?” The short answer is yes. The dialogue and phrasing is mine, of course. For example, none of the books of the Bible were written in a Q&A format. Presenting Habakkuk and Hebrews this way was a stylistic choice on my part.
James never called anyone a “prick,” as far as we know. And the astute observer might note that King David never actually went through a heavy metal phase, though some of his lyrics could have easily found a home in Dio-era Sabbath. Certainly I use my own language and allegories to make the work translate to a modern audience, though my intention is always to describe the events and their meanings just as they were written in the Bible thousands of years ago.

I am joined in this work by Shannon Wheeler, award-winning cartoonist for the
New Yorker
and the creator of
Too Much Coffee Man
.
It was hard enough for me to squeeze each book of the Bible down to two or three pages each. Shannon had the unenviable task of boiling them down into a single panel, and in doing so, making it even easier to absorb. This is by no means a new strategy. In fact, this is the basic concept behind cathedrals. When people were bored by the bishop’s sermon, they could always look around at the stained-glass windows and enjoy the glowing cartoons of Jonah getting swallowed by a whale, or John the Baptist getting his head lopped off. When you’re trying to explain something complicated, visual aids never hurt.

It is not my intention to mock the Bible with this book, nor to endorse it, but merely to present it on its own terms in a way that is accessible and which relays the same sense of fascination I had when I truly discovered the Bible for the first time. If you want to reject the Bible as ancient superstition or digest it as the holy word of God, that’s up to you. I just thought you might like to know what’s actually in the hot dog.
—Mark Russell

Part One
The Torah

In which God gets the human race on the road and then threatens to stop the car, the Jews receive 613 easy-to-follow rules, and a haircut topples a nation.

The Torah represents the first five books of the Bible. It tells the history of the human race from Creation through the founding of the Jewish nation and their settlement in the land of Israel.

God created the human race to be his pets. As a first-time pet owner, God wisely chose to start small, creating just two people: Adam and Eve. But, much like baby alligators, they proved to be rotten pets and were thus flushed into the sewer, where they propagated, until the sewers were overflowing with wild humans, hissing and spitting, fornicating and worshiping idols. So God flushed out the entire human race with a flood.

When the survivors of the flood dried themselves off and re-populated the Earth, God decided that, rather than exterminating them, he would take another crack at domesticating human beings. Again, he decided to start small, with one family, the family of Abraham, whom he found to be smart and highly trainable. God gave Abraham and his descendants a set of laws with which to housebreak them. Then God found them a good home, a Promised Land where they could set a good example for the rest of the human race of how God envisioned this whole pet-thing playing out going forward.

In truth, though, God “discovered” the Promised Land in much the same way that my mother discovered the Olive Garden. Everybody already knew about it, and it was already full of people when she got there, but hey, unlimited breadsticks.

When the Jews arrived at the Promised Land, they were a little irked to find the place overrun with pagans. The Promised Land was populated by many different tribes, each with their own unique culture and way of life. There were the Canaanites, the Amorites, the Girgashites…for our purposes, let’s call them “Indians.”

Whenever the Jews won a battle against the Indians, God ordered them to celebrate by killing all the men, women and children. He also ordered them to kill their cattle and their sheep and throw all their belongings into a bonfire, as if the Indians never existed. So it was sort of like,
“You know, maybe we really
did
discover the Olive Garden.”

When they were done clearing out all the pagans and their furniture, they named their new country “Israel,” but this is not the end of the story. Being God’s chosen people is always a roller-coaster ride…and this ride was just beginning.

A Family Affair: The Wish: Truth in Lies, Book 9 by Campisi, Mary
Silent in the Sanctuary by Deanna Raybourn
The Transdyne Awakening by Chris Betts
Nightsong by Karen Toller Whittenburg
Obedience by Joseph Hansen
Stars Rain Down by Chris J. Randolph
Love Birds of Regent's Park by Ruth J. Hartman
There Is No Year by Blake Butler
Ride to Freedom by Sophia Hampton
Victim of Fate by Jason Halstead