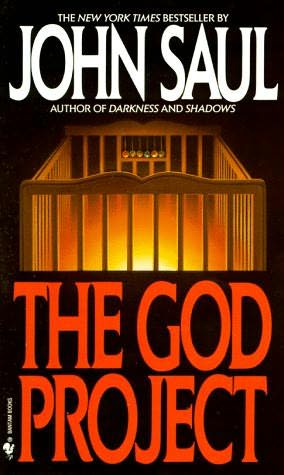 “Of his six books,
The God Project
is by far the best written, the best plotted, and certainly the most entertaining.”

“Each chapter leaves you breathless for more … if you’re a patsy for a fast, enjoyable book, you’ll like
The God Project
. The characters are well defined and carry the action forward at a fast clip. And the ending has a few wonderful twists.”

Saul is “a writer with the touch for raising gooseflesh.”

“Here is the kind of book you can sail through … going faster and faster … tantalizing.”

“Saul’s fans will gobble it up and ask for more.”

“If you want perfect summer reading, try
The God Project.”

CRY FOR THE STRANGERS
***

Part 4—IN THE SHADOW OF EVIL: THE HANDKERCHIEF
**

Part 5—DAY OF RECKONING: THE STEREOSCOPE
**

THE RIGHT HAND OF EVIL
**

**
Published by the Ballantine Publishing Group

THE GOD PROJECT
A
Bantam Book

All rights reserved.
Copyright © 1982 by John Saul.
Library of Congress Catalogue Card Number: 82-90289
No part of this book may be reproduced or transmitted
in any form or by any means, electronic or mechanical,
including photocopying, recording, or by any information
storage and retrieval system, without permission in
writing from the publisher
.
For information address: Bantam Books
.

Bantam Books are published by Bantam Books, a division of Random House, Inc. Its trademark, consisting of the words “Bantam Books” and the portrayal of a rooster, is Registered in U.S. Patent and Trademark Office and in other countries. Marca Registrada. Bantam Books, 1540 Broadway, New York, New York 10036.

For Sarita,
and the memory of Leon

S
ALLY MONTGOMERY LEANED DOWN
and kissed her daughter, then tucked the pink crocheted blanket that her mother had made in honor of Julie’s birth—and which Sally hated—around the baby’s shoulders. Julie, six months old, squirmed sleepily, half-opened her eyes, and gurgled.

“Are you my little angel?” Sally murmured, touching the baby’s tiny nose. Again Julie gurgled, and Sally wiped a speck of saliva from her chin, kissed her once more, then left the bedroom. She had never quite gotten around to converting it into a nursery.

It wasn’t that she hadn’t intended to. Indeed, the room had been planned as a nursery ever since Jason had been born eight years earlier. She and Steve had made elaborate plans, even gone as far as picking out wallpaper and ordering curtains. But Sally Montgomery simply wasn’t the decorating type. Besides, though she had never admitted it to anyone but Steve, the idea of redoing an entire room just for the enjoyment of an infant had always struck her as silly. All it meant was that you had to keep redoing it as the baby grew up.

In the gloom of the night-light, Sally glanced around the room and decided she had been right. The curtains, though they were blue, were still bright and clean, and
the walls, still the same white they had been when she and Steve had bought the house nine years ago, were covered with an array of prints and pictures that any self-respecting baby should enjoy—Mickey Mouse on one wall and Donald Duck opposite him, with a batch of Pooh characters filling up the empty spaces. Even the mobile that turned slowly above Julie’s crib had been chosen as much for the quality of its construction as for its design, though Sally had, almost reluctantly, come to appreciate the abstract forms which the saleslady had assured her would “do wonders for Baby’s imagination.” When they were grown, and had children of their own, she would pull the pictures and the mobile out of the attic and split them between Jason and Julie, who by then would have come to a new appreciation of them.

Chuckling at what she knew was an overdeveloped sense of practicality, Sally quietly closed the door to the baby’s room and went downstairs. As she passed the door to the master bedroom she paused, listening to Steve’s snoring, and was tempted to forget the report she was working on and crawl into bed with him. But again, the practical side of her came to the fore, and she pulled that door, too, closed and went downstairs.

She glanced at the papers covering the desk. Better to get the report done tonight, and have the papers cleared off before Steve came down in the morning and demanded to know why “his” desk was cluttered with “her” things. Years ago she had given up trying to convince him that the desk was “theirs.” Steve had certain territorial ideas. The kitchen, for instance, was hers, even though he was a better cook than she was. The bathrooms were hers, too, while the family room, which by all rights should definitely have been theirs, was his. On the other hand, their bedroom, which they both loved, was hers, while the garage, which neither of them particularly wanted, was his.

The yard, being apart from the house, had somehow managed to wind up being “theirs,” which meant that whoever complained about it had to do something about it. All in all, Sally decided as she wandered into “her”
kitchen and began making a pot of tea, the division of the house and yard had worked out very well, like everything else in their marriage. She stared at the pan of water on the stove and idly wondered if it was true that as long as she watched it, it wouldn’t boil. Then, for her own amusement, she picked up a pencil and began jotting figures on the scratch pad beside the telephone. Figuring the resistance of the metal in the electrical coils, the power of the current, and the volume of water, she came to the conclusion that the water should start boiling in eight minutes, give or take fifteen seconds, whether she watched it or not.

And that, she thought as the water began bubbling right on time, is the pleasure of having a mathematical mind. She poured the water over the tea bags and carried the pot and a cup back to the desk.

Much of the clutter was made up of computer printouts, and it was Sally’s job to analyze the program of which the printouts were the results. Somewhere in the program there was a bug, and the college admissions office, which had dreamed up the program in the first place, had asked Sally to find it. The program, designed to review the records of hopeful high school seniors, had disqualified every applicant for the fall semester. When Sally had suggested that perhaps the program was perfect and the applicants simply weren’t qualified, the dean of admissions had been less than amused. Soberly, he had handed Sally the program and the output, and asked her to find the problem by Monday morning.

And find it she would, for Sally Montgomery, as well as being beautiful, was brainy. Too brainy for her own good, her mother had always told her. Now, as she began analyzing the program in comparison to the printout it had produced, she could almost hear her mother’s voice telling her she shouldn’t be down here working in the middle of the night; she should be upstairs “loving her husband.”