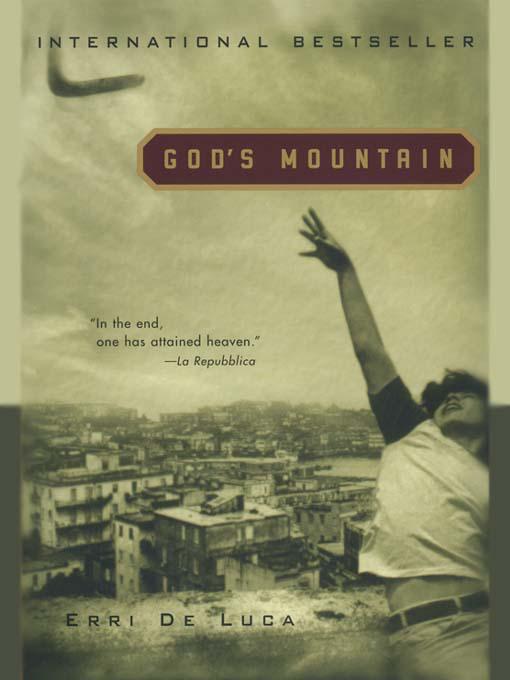 This is a work of fiction. Names, characters, places, and incidents are either the product of the author’s imagination or are used fictitiously, and any resemblance to actual persons, living or dead, business establishments, events or locales is entirely coincidental.

A
Riverhead
Book / published by arrangement with the author

This book may not be reproduced in whole or part, by mimeograph or any other means, without permission. Making or distributing electronic copies of this book constitutes copyright infringement and could subject the infringer to criminal and civil liability.

The Berkley Publishing Group, a division of Penguin Putnam Inc.,

RIVERHEAD
and the “
R
” design are trademarks belonging to Penguin Putnam Inc.

’
A JURNATA É
‘
NU MUORZO
—the day is a morsel, reads the sign over the doorway to Master Errico’s workshop. I’d already been standing out front for a quarter of an hour to start my first day of work off right. He gets there at seven, rolls up the gates, and speaks his words of encouragement: the day is a morsel. One bite and it’s gone, so let’s get busy. Yes, sir, I answer, and so it went. I’m writing my first entry today to keep track of these new days. I don’t go to school anymore. I turned thirteen and my dad sent me to work. It’s the right thing to do. It’s time. You only have to stay in school till third grade. He let me stay until fifth because I was sickly and also because that way I’d have a better diploma. Around here all the kids go to work even if they never went to school, and Papa didn’t want that. He works at the docks. He never went to school and is just learning to read and write at the night school run by
the longshoremen’s cooperative. He only speaks dialect and is intimidated by proper Italian and people with an education. He says that you do better in life if you know Italian. I know Italian because I read library books, but I don’t speak it. I write in Italian because it’s quiet. I can put down what happens every day, sheltered from the noise of Neapolitan.

I’
M FINALLY
working, even if I don’t make much, and Saturdays I bring home my pay. It’s the beginning of summer. At six in the morning it’s cool. The two of us have breakfast together and then I put on my smock. We leave the house together. I walk up the street with him a ways and then head back. Master Errico’s shop is in the alley down from our building. For my birthday Papa gave me a piece of curved wood. It’s called a boomerang. I took it in my hands without asking what it
was. A tingle, a little electric shock went through me. Papa explained that you throw it far and it always comes back. Mama was against it.
“Ma addò l’adda ausa”;
where’s he gonna use it? She’s right. In this neighborhood of alleyways called Montedidio there’s not enough room to spit between your feet, no room to hang out the wash. All right, I said, maybe I can’t throw it, but I can still practice the moves. It’s heavy, like iron. Mama gave me a pair of long trousers. She got them at the market in Resina. They’re good quality. American. Rugged, dark. I put them on and rolled them up to my knees. “Now you’re a man,” an
ommo,
“you bring money home.” Yes, I bring home my pay on Saturdays, but it’ll take a lot more than that to make me a man. Meantime I’ve lost my voice and have a frog in my throat.

P
APA GOT
the boomerang from a sailor friend. It’s not a
pazziella,
a toy. It’s a tool that ancient people used. As he explains, I get to know its surface. I rub my hand over it, in the direction of the grain. From Master Errico I learn about the grains of wood. There’s a right way and a wrong way. I follow the boomerang’s grain when I polish it and it shakes a little in my hands. It’s not a toy, but it’s not a tool either. It’s something in between, a weapon. I want to learn how to use it. I want to practice throwing it tonight, after Mama and Papa have gone to sleep. Italian has one word for sleep and another for dream. Neapolitan has just one—
suonno
. For us they’re the same thing.

I
SWEPT
the floor of the woodshed today and got attacked by fleas. They went for my legs. At work I wear shorts, and my legs turned black. Master Errico stripped me and washed me down at the pump in front of the shop. We were laughing like crazy. Thank goodness it’s summer. There were mice in the woodshed, too. We put down some poison.
“ ’O súrece! ’O súrece!”
he screamed. They give him the creeps, not me. Then I got paid. He counted out the money and gave it to me. At night I started to practice with the boomerang. I learned that it didn’t come from America. It came from Australia. The Americans are full of new things. The Neapolitans gather around when their ships weigh anchor and they come ashore. The latest thing is a plastic circle. It’s called the Hula Hoop. I saw Maria spinning it around on her hips without letting it fall to the ground. She told me, “Try it.” I said no, that I didn’t think it was for boys. Maria turned thirteen before me.
She lives on the top floor. That was the first time she talked to me.

I
SQUEEZE
the boomerang. It gives me a shock. I start going through the moves to throw it. I wind it around behind my shoulder, then thrust it forward like I’m going to release it, but I don’t. My shoulders are quick, like Maria’s hips. I can’t let the boomerang fly free. We’re too cramped on top of Montedidio. My hand grips the last half inch of the wood and pulls it behind me. I keep doing this, back and forth. My back loosens up. I work up a sweat. I keep a tight grip. All it takes is a flick of the wrist for it to slip from your fingers. After a while I can see that my right hand’s getting bigger than my left, so I change hands. This way one side of my body keeps up with the other, equal in speed, strength, and exhaustion. My last few unreleased throws
really want to fly. It hurts my wrist to hold them back, so I stop.

I
DIDN
’
T
want to stay at school. I was bigger than the other fifth graders. At snack time some kids used to take cakes out of their bags. To us poor kids, the janitor would hand out bread with quince jam. When it got hot the poor kids would come to school with their heads shaved like melons, on account of lice. The other kids still had hair to comb. There were too many differences between us. They went on in school. We didn’t. I had to repeat grades a lot because I used to get sick with fevers. Then they promoted me but I didn’t want to go to school anymore. I wanted to help out, to work. The studying I’ve done is enough. I know Italian, a quiet language that sits still inside books.

E
VER SINCE
I started working and training with the boomerang I get hungrier. Papa is happy to have breakfast with me. At six the first rays of sunlight slither into the street and make their way into the houses, even the lower floors. We don’t turn the light on. In summer the sunlight treads lightly over the ground before climbing up and becoming an oven that sits on top of the city. I put bread inside my cup of milk, which is darkened with coffee substitute. Papa used to get up alone every morning and now he’s happy that I’m there, to talk to, to leave the house with. Mama gets up late. A lot of the time she’s weak. At lunchtime I go up to the washbasins on the roof to hang out the laundry, then I pick it up in the evening. I never used to go up to the terrace before. It’s high above Montedidio and gets a little breeze in the evening. No one can see me so I practice there. The boomerang quivers in the fresh air. My sleeve gets twisted when I squeeze the boomerang
to keep from letting go. It’s wood that was grown to fly. Master Errico is a good carpenter. He says that wood is good for fire, for water, for wine. I know that it’s good for flying, too, but I won’t say so if he won’t. I was thinking I’d like to throw the boomerang from where the washbasins are, from the highest rooftop in Montedidio.

M
Y ARMS
are tired, sweaty, so I stretch out for a bit on the pavement by the clotheslines. By now there isn’t even a sliver of the city above me. I close my good eye, and look up with the other one, the blind one, half open. Instantly the sky grows darker, denser, closer, right on top of me. My right eye is weak, but it can see the sky better than my good eye, which I need for the street, to look people in the face, to do my job in the shop. My left eye is sly, fast, understands things in a
“Ll’Italia mia sta in America”
—my Italy is in America. That’s where half my family lives. “Your homeland is what puts food on your plate,” she says, and stops. To tease her, Papa says, “Then you must be my homeland.” He doesn’t want to disagree with Mama. In our house we never raise our voices, we don’t get into arguments. If something bothers him, he puts his hand over his mouth and covers half his face.