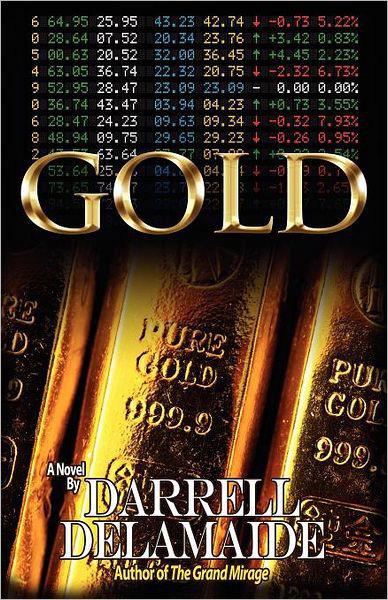 THE NEW SUPERREGIONS OF EUROPE

GOLD, a novel by Darrell Delamaide

All rights reserved, including the right to reproduce this book or portions thereof in any form whatsoever. For information email [email protected] or contact:

This novel is a work of fiction. Names, characters, places, and incidents either are the product of the author’s imagination or are used fictitiously, and any resemblance to actual persons, living or dead, events, or locales is entirely coincidental.

In memory of my mother

The more things change, the more they stay the same. In fact, the world now seems closer to the global financial catastrophe depicted in
Gold
than it did when the novel was originally published. As the financial crisis that started in 2008 demonstrated, markets are more interconnected and fragile than ever. And in the summer of 2011, the U.S. government came within a hair’s breadth of defaulting on its debt – a calamity that once was the exclusive preserve of fanciful writers of fiction.

Gold
was in many ways prescient and for that reason is surprisingly relevant today. Some of the technology in news distribution and commodities trading has changed, but the essential dynamic of the markets and the role of information remains the same.

The novel’s action reflects the political situation in the late 1980s. South Africa was still under an oppressive apartheid rule, and communism still ruled in Soviet Russia.
Gold
accurately portrays the forces of revolution that would lead to change in South Africa and thus has become an historical thriller. The Russia of Vladimir Putin is hardly more democratic or less autocratic than that of Leonid Brezhnev, so some things, again, stay the same.

This new edition is a reprint of the entire original text, without any additions or changes.
Gold
was first published as a hardback by E.P. Dutton in 1989 and as a mass paperback by NAL/Onyx in 1991. All rights have since reverted to me, and I’m pleased to make the novel, long out of print, available once again as an e-book and paperback under the imprint of Barnaby Woods Books.

Drew swiveled toward the screen and tapped quickly on the keys: COM, GRA, FUT, coding the story for the commodities, grain, and futures wires, urg, priority code urgent. Bells? News tickers did away with bells years ago. Computer screens don’t ring.

The quiet static of his keypunching contrasted with the roar of tension in Drew’s ears. The anchovy schools off the coast of Peru had disappeared again, according to the unexpected announcement from the Ministry of Mining and Natural Resources in Lima. Drew remembered his early days as an economic journalist when the anchovies had reappeared suddenly after a two-year absence. He had been sitting quietly editing a story when the slotman started squirming and muttering about anchovies, just like Drew was doing now. So what? he thought at the time. Only afterward did the filing editor explain to him that anchovy meal is one of Peru’s main exports and the leading substitute for soybean meal. The Chicago commodities pits would go into contortions whenever those anchovies appeared or disappeared. Nobody knew where they went.

The second take came up on the screen. The Peruvian Ministry spokesman said nobody knew where the anchovies had gone, but gone they were: bad for Peru’s exports, bad for its foreign debts. Shit, yes, he had forgotten to send it on the financial wire. He coded the second take the same as the first, adding FIN for the financial wire. He put it into the computer queue, called up the first take again, coded it for FIN, sent it out again, and sent out the second take.

Drew sat back and blinked. He should not even be sitting in the slot. It had been a long time. But MacLean had had to leave all of a sudden, and since there were only two junior copy editors on the desk, Andrew Dumesnil, managing editor of World Commodities News, found himself in the slot for the first time—he counted quickly—in six months.

Just then Tom came in. Drew tapped quickly to code the afternoon gold fixing: COM, FIN, and MET for the metals wire; quk, quick, for the next-to-urgent priority.

“Tom, can you take over? I shouldn’t even be here,” Drew called over to the dapper young man. Tom, a twenty-seven-year-old Englishman, was the most seasoned editor on the desk, with five years’ service. A graduate of Oxford or Cambridge—Drew could never remember which one—Tom would have been prime material for Reuters, the big British agency, but he had opted for the tiny American-owned news service instead.

The main editorial office of World Commodities News occupied a surprisingly small space on the fifth floor of the Star building in London’s Fleet Street. The leased space consisted of a large room with a cubicle in one corner formed by glass and plyboard panes that stopped short of the ceiling. The central space was occupied by a round table, open on one side, with what looked like an airline cockpit in the center—a bank of screens and keyboards set in a semicircle at typewriter height. There was the chair for the filing editor, who could operate the various keyboards like an organist in a baroque church, while keeping an eye on the table surrounding him. Around the rim, like spokes on a wheel, were six computer screens and keyboards for the copy editors. Usually, like today, only two or three were occupied. The entire editorial staff at WCN head office consisted of twelve persons working in shifts around the clock.

Tom stepped in the slot behind Drew. “Where’s MacLean?” he asked, rolling up his sleeves.

“Toothache? More like headache. I don’t know how he sits in here for eight hours a day, day after day.”

Drew stood up but kept his fingers on the keyboard to code the report on the Comex opening. He straightened up. Tall at six foot two, he was well built without looking athletic. He was winning the battle so far against middle-aged paunchiness; his twice-weekly squash games kept his preference for beer from getting the upper hand over his figure. There was a softness to his features that testified to a life spent in classrooms and offices, but a lively intelligence in his eyes and animation in his face lent him a certain vigor that belied his intellectual bent. The clothes fit the man—his salary as managing editor allowed him to indulge his penchant for tailored suits and shirts. Drew picked patterns and colors that were neither sober nor flashy, corresponding to his particular notions of what was proper for a financial journalist, a man of letters living in a world of money.

“All yours,” he said to Tom, stepping around the younger man and dancing quickly out of the slot.

Drew went back to his office and picked up the phone to make a call. Tom glanced at him in his glassed-in cubbyhole before scrutinizing the report of a bus contract for Daimler-Benz. Too small. Delete.

“Hello, Bart,” Tom called over to the curly-headed young man on the rim. “How’s things today?”

Bart turned to Tom, as though he were waking up. “Not too much going on.” As far as Bart could see, not much would ever go on at a commodities news agency. He had something of the dreamer about him, as though he were a southern novelist in exile. He had joined WCN’s domestic counterpart, U.S. Commodities News in Chicago, straight from the University of North Carolina. After just six months, they had dispatched him to London.

“What’s all this anchovy shit?” Tom asked, scanning the printout of the outgoing copy.

“Soybean dealers need to know,” explained Bart, turning back to his story on oil refining capacity in Europe. He’d picked up a few things on the Chicago desk. He was bright, in spite of being a dreamer.

The phone rang in the slot. “Editorial,” Tom answered, cradling the receiver on his shoulder as he put on the codes for the closing Zurich stocks and sent the item off.

“What mines? Who is this?” Tom said. He took hold of the receiver and pressed it closer to his ear.

“This is Van der Merwe in Johannesburg.”

Tom deleted the earnings report of a small French company and pressed his finger into his other ear to hear better. “Who blew up which mines?” he asked.

“The terrorists. They’ve blown up the gold mines.” The voice paused. “It’s incredible. All of them. All the big ones on the Rand. Looks like ALF.”

“Hold on.” Tom looked into the cubbyhole. Drew was gesturing as he talked on the phone. “Drew,” he called, “you better pick up line two in a hurry.”

Drew looked at him, spoke quickly into the phone, and punched a button on his phone console.

“Are you sure? How’d you find out?” Tom could hear Drew ask through the glass.

Drew had picked up a pen and was writing furiously. “What’s the source?” he interrupted. “How sure is this?” He scribbled constantly.

Tom looked at an analysis of the U.S. Agriculture Department’s crop estimates that had been released earlier in Washington. He routed it into Bart’s editing queue.

Drew stopped writing. He looked at the phone, jabbed the receiver cutoff, punched some buttons on the console, hung up. He strode out of the office to the telex printer, looked at the copy, and then went over to the clipboards opposite the slot to leaf quickly through the long sheets of printer paper. He went to his phone again. “Try to get me Van der Merwe in Johannesburg,” he said to the switchboard operator downstairs. Then he went over to the desk.

“Have you seen a telex from Johannesburg?” he asked Tom.

Without answering, Drew went back into his cubicle and called the switchboard. “Any luck on the call to Johannesburg?” he asked into the receiver. “Keep trying, it’s urgent.”

“He says the ALF has blown up the big gold mines on the Rand,” Drew said, coming back out. “But the line went dead. He said he heard it ‘through reliable sources in the underground.’”

Tom sympathized with his superior. If it was true, the report would rock the markets like an atomic bomb. But was it true? “How in the hell would Van der Merwe get a telex out?” he asked.

South Africa had imposed a draconian news censorship eight months previously. Most foreign correspondents were sent home, and only authorized “pool” reporters were allowed to stay, each one designated to provide news for several media. They were confined to Pretoria and only allowed to report official government communiqués—on any subject. All telex traffic was carefully monitored.

“I don’t know how he got it out, but he claims he did,” Drew responded impatiently.

He tapped his notes in the palm of his hand, biting his lip. “Damn.” He turned back into the office and sat down at the phone.

“Hello, Morgan, lucky I caught you,” Drew said, when Morgan Preston picked up on the first ring. It was his direct line, and Drew was probably the only journalist who had that number. “Saw gold was steady at the fixing,” Drew went on. “Quiet market, I guess.” Preston was one of the five merchant bank representatives who met twice a day to “fix,” or set, the price of gold. That London price became the reference point for all ingot trading around the world.