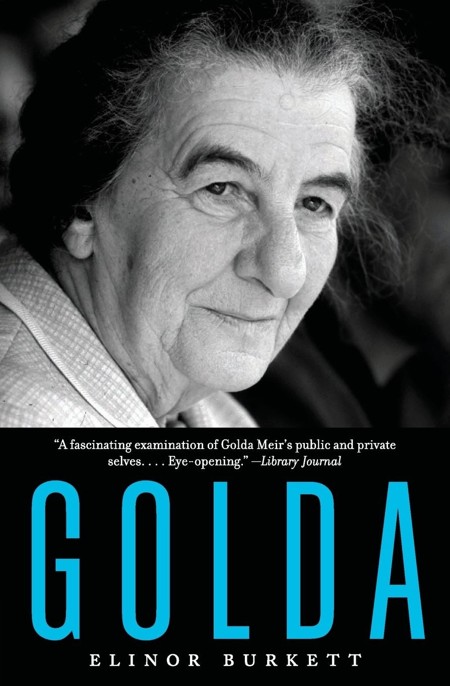 In memory of Nathan Cohen, my first guide through Israel

Other Books by Elinor Burkett Cover

One cannot and must not try to erase the past merely because it does not fit the present.

woman of steely self-discipline, Golda Meir was rarely known to flinch, even more rarely to allow any emotion to slip beyond her control. But as the U.S. Marine Corps helicopter lifted off from Philadel- phia on a gray Thursday morning in September 1969, she clenched her signature black purse and whispered her apprehension to Lou Kaddar,

Philadelphia had been a triumphal love fest for Israel’s prime minister, thirty thousand people crowded into Independence Hall Park singing “Hatikvah” and waving we dig golda posters. Both the mayor and the governor of Pennsylvania had shown up to honor the dowdy matron of seventy-one. But Golda knew better than to expect any such outpouring at the White House.

Richard Nixon was an enigma, a Republican who owed nothing to the Jewish vote. For months, his secretary of state, William Rogers, had been pressuring Israel to cooperate with a U.S.-Soviet peace initiative and withdraw from the territories occupied in the 1967 war in exchange for

vaguely worded international security guarantees. The plan was every- thing Golda hated about Big Power arrogance, so she’d angled for an in- vitation to Washington both to stop Rogers’ momentum and to convince Nixon to fill her shopping basket with state-of-the-war Phantom jet fight- ers, A-4 Skyhawk attack bombers, ground-to-air missiles, and a $200 mil- lion low-interest loan to pay for them.

She might have felt calmer if she’d understood that the White House was equally anxious. In a secret cable, the U.S. ambassador in Israel had advised against inviting her at all. She’ll try to persuade the president to abandon his negotiations with the Russians and “presumably her efforts will be futile,” wrote Walworth Barbour. “If such pleas were limited to private discussions little harm might be done although conversations could be unpleasant in view of her emotionalism. But if they [are] re- peated, as we would have to fear, on
Face the Nation, Meet the Press,
and before National Press Club, we might face a major internal storm.”

Golda had been prime minister of Israel for only six months, but it was already clear that she was not just another head of state, or just another prime minister of Israel. The protocol office at the State Department had been swamped with requests for invitations to the state dinner Nixon and his wife, Pat, were hosting on the night of her arrival, hundreds of donors and congressmen, Jewish leaders, governors, activists, and entertainers hoping to share the White House chef ’s Sole Veronique with her. In Los Angeles, Nelson Riddle was busy composing special music for her en- trance to the gala Hollywood was throwing in her honor.

In New York, her pending visit had sparked a political brouhaha be- tween Mayor John Lindsay and his opponents in a tough election cam- paign over who would stand next to her at the airport. Then the
New York Times
accused the mayor of using Golda’s visit for political advantage by organizing the most lavish dinner in the city’s history for her. More than 1,100 guests had been invited, at $25 a person. Three years earlier, when the city threw a reception marking the opening of the United Nations General Assembly, they had confined the guest list to 800.

On her first trip to the United States since taking office, Golda had

been invited for coffee by the Senate Foreign Relations Committee and breakfast with a group from the House of Representatives. She’d been booked on
Meet the Press
and the
Today
show and for meetings with the editors of the
New York Times,
the
Los Angeles Times, Time, Life, Fortune,
and
Newsweek.
The AFL-CIO had asked her to deliver a speech to their biennial convention in Atlantic City. And a who’s who of luminati, from former vice president Hubert Humphrey, Demo- cratic Party heavyweight Averell Harriman, and New York governor Nelson Rockefeller to the Reverend Billy Graham, had appealed for a bit of her time.

Before she left home, her staff had worried obsessively about the two evening dresses and the hats she’d bought, and whether she’d agree to wear the gloves they were convinced diplomatic niceties demanded. But all she could think about was how to explain to Nixon why Israel wouldn’t withdraw “a single soldier from a single inch” until the Arabs signed a peace agreement.

Nixon quickly laid Golda’s fears to rest. Despite reams of memoranda from his staff warning him not to succumb to the Israeli prime minister’s charms, alone with the grandmotherly woman for more than an hour and a half, Nixon couldn’t resist her.

“I remember so well when we sat down in the chairs in the Oval Of- fice, and the photographers came in . . . and we were shaking hands, and she was smiling and making the right friendly comments,” Nixon re- called. “Then the photographers left the room. She crossed her legs, lit a cigarette and said, ‘Now, Mr. President, what are you going to do about those planes that we want and we need very much?’ . . . Golda Meir acted like a man and wanted to be treated like a man. There is no question that she was a very strong, intelligent leader in her own right.”

That night, at the glittering State dinner, where Leonard Bernstein and Isaac Stern provided the entertainment, he toasted his guest of honor. “This is the first time . . . we have had the honor to receive the head of government of another state who is also a woman. I can only say . . . that I am reminded of the fact that David Ben-Gurion, in referring to our very

distinguished guest here this evening, referred to her as the best man in his cabinet.

“I also recall the old Jewish proverb to the effect that man was made out of soft earth and woman was made out of a hard rib,” Nixon contin- ued. Then he compared her to the biblical prophet Deborah, who “loved her people and served them well,” noting that she made “peace in the land for forty years.”

To modern ears those words sound as patronizing as they did to Golda, who flinched when she heard them, having always abhorred that quote from Ben-Gurion and the sentiments behind it. But she came long before Margaret Thatcher, Benazir Bhutto, Corazon Aquino, and Angela Merkel, long before Hillary Clinton commenced a bid for the American presi- dency that was shadowed less by her gender than by her messy history with the voters she was trying to woo. Golda was a trailblazer and an anomaly in the corridors of power she entered, and she walked through them as she had to, holding her tongue.

When she departed that evening, Pat Nixon kissed her good-bye. The president beamed. And Golda raced back to Blair House, where she and Lou stayed up late giggling about the flowers, the paintings, and the ele- gant clothing the women had worn.

For a full week, as she traveled from Washington to New York, Los Angeles, and her old hometown of Milwaukee, Golda kept doing it right, catapulting Israel’s view of the Middle East conflict onto the front page of the nation’s newspapers, charming political and media leaders, and wracking up the sort of crowds that those in power could not ignore. At the National Press Club, she beguiled journalistic heavyweights with her caustic wit. Would Israel consider employing nuclear weapons if the Arabs attacked again? one reporter asked. “We haven’t done so bad with conventional weapons,” she responded. When the club president asked for her gefilte fish recipe, having heard of its delights from her grandson, she promised to cook lunch for the entire group on her next visit.

Forgiveness by Mark Sakamoto
Major Misconduct (Aces Hockey #1) by Kelly Jamieson
Licence to Dream by Anna Jacobs
The Visconti House by Elsbeth Edgar
Easy by Tammara Webber
The Other Child by Lucy Atkins
Gravenhunger by Goodwin, Harriet; Allen, Richard;
Son of the Black Stallion by Walter Farley
The Enchantress (The Secrets of the Immortal Nicholas Flamel #6) by Michael Scott
Yuletide Mischief by Rose, Dahlia