This book will self-destruct if it falls into the wrong hands. Make that paws. Rat paws. [You know who you are.]

After being tipped off by an anonymous source (known only as âDeep Rodent'), Heather Frederick knew what she had to do. She had to go undercover. She had to find out for herself the truth of what was happening beneath the floorboards.

Now she has broken cover to write books about the spy mice. âThe world needs to know the peril facing the brave members of the Spy Mice Agency,' she reports. She refuses to divulge her code name on the grounds that it would place her in danger. In addition, all the names in this book have been changed to protect active undercover rodent operatives.

For my true-blue sisters Lisa and Stefanie,
with whom I shared a happy childhood interlude in England 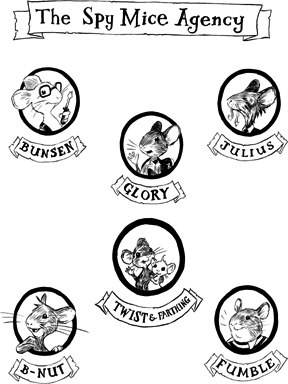 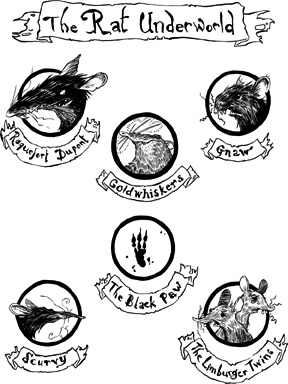 At exactly one minute past midnight, a large black taxi turned into the sweeping drive in front of London's Savoy Hotel.

A mouseling stepped out of the shadow of the kerb as the vehicle approached. Its headlights caught the hopeful gleam in his bright little eyes. He watched as the cab pulled up smartly in front of the entrance. It swished through a puddle as it did so, drenching him with icy water.

The mouseling slumped back against the kerb, the hopeful look instantly extinguished. He'd thought that perhaps his luck had finally changed. It hadn't. Not one bit. He swiped dejectedly at his sodden face with a grimy paw and sneezed. What a horrid night!
The skies were spouting the kind of cold, sleeting rain that only London in late December could produce â and now this. His slight body shook violently, and the mouseling wrapped his tail tightly round himself in a vain attempt to keep warm.

Shivering, he watched as the cab driver hopped out and trotted round to open the door for his passengers. The mouseling's tummy rumbled. Not only had he had no luck tonight, he'd had nothing to eat either. He hadn't earned it yet. âOnly mouselings who sing for their supper get their supper,' Master always said.

And the mouseling desperately wanted to please Master. Master was the giver of all that was good: food, warmth, praise. The mouseling owed Master his life. Before Master, he'd been nothing. An urchin. A throwaway. âNobody wants worthless street trash like you,' Master reminded him often. Reminded all of them often. âNobody but me.'

Still shivering, the mouseling peered over the kerb as two pairs of feet emerged from the taxi: a lady's and a gentleman's. His tiny heart began to beat a little faster. Maybe his luck had changed after all. The gentleman's shoes were highly polished and expensive-looking. The lady's stylish sandals
criss-crossed her pale toes with narrow straps. Useless for walking, especially in this weather, but perfect for making an impressive entrance at one of London's poshest hotels. Which was just the sort of thing that toffs liked to do.

âYou can always tell a toff by his shoes,' Master had instructed. âThat and his bags. Toffs like to spend money on shoes and bags.'

The cab driver removed a trio of suitcases from the taxi's boot and placed them on the pavement. The mouseling watched intently. He lifted his grubby little nose into the air and sniffed. Leather! Expensive leather. Hope soared in him once again. This was what he'd been waiting for all evening. These were just the sort of bags that toffs liked to take to fancy hotels.

And toffs â upper-crust, well-heeled, wealthy humans â were what the mouseling was after tonight. What all Master's mouselings were after in every corner of the city tonight.

The small mouse's tummy rumbled again.
Right, then
. Time to get to work if he fancied any supper. He shouldered his soggy duffel bag (made from the toe of a sock) and with a practised leap swung himself up over the kerb. As the taxi pulled away, he tumbled
into the cuff of the gentleman's well-cut trousers, and a moment later the Savoy's doorman ushered the two human guests â and one unseen mouseling â inside the hotel.