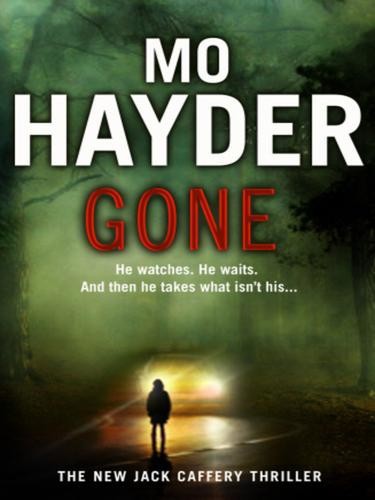 Mo Hayder has asserted her right under the Copyright, Designs and Patents Act 1988 to be identified as the author of this work.

This book is a work of fiction and, except in the case of historical fact,any resemblance to actual persons, living or dead, is purely coincidental.

This book is sold subject to the condition that it shall not,by way of trade or otherwise, be lent, resold, hired out,or otherwise circulated without the publisher’s prior consent in any form of binding or cover other than that in which it is published and without a similar condition,including this condition, being imposed on the subsequent purchaser.

The Random House Group Limited supports the Forest Stewardship Council (FSC), the leading international forest-certification organization. All our titles that are printed on Greenpeace-approved FSC-certified paper carry the FSC logo.Our paper procurement policy can be found at
www.rbooks.co.uk/environment

For more information on Mo Hayder and her books, see her
website at
www.mohayder.net

Detective Inspector Jack Caffery of Bristol’s Major Crime Investigation Unit spent ten minutes in the centre of Frome looking at the crime scene. He walked past the road blocks, the flashing blue lights, the police tape, the onlookers gathered in huddles with their Saturday-afternoon shopping bags peering to catch a glimpse of the forensics guys with their brushes and bags, and stood for a long time where the whole thing had happened, among the oil leaks and abandoned shopping trolleys of the underground car park, trying to soak up the place and decide how anxious he should be. Then, already cold in spite of his overcoat, he went upstairs to the manager’s tiny office where the local officers and the forensics guys were watching CCTV footage on a small colour monitor.

They stood in a semicircle, holding cups of machine coffee, some of them still in their Tyvek suits with the hoods down. Everyone glanced up as Caffery entered, but he shook his head, opened his hands to show he had no news, and they turned back to the TV, their expressions closed and serious.

The picture had the typical graininess of a low-end CCTV system, the camera trained on the entrance ramp of the car park. The opaque timecode graduated from black to white and back again. The screen showed cars ranked in painted bays, winter sunlight coming through the entrance ramp beyond them, bright as a floodlight. At the back of one of the vehicles – a Toyota Yaris – a woman stood with her back to the camera, loading groceries
from a trolley. Jack Caffery was an inspector with eighteen years of the hardest policing in his pocket – Murder Squad, in some of the country’s toughest inner-city forces. Even so, he couldn’t fight the cold pinch of dread the image gave him, knowing what was going to happen next on the film.

From the statements taken by the local officers he knew a lot already: the woman’s name was Rose Bradley. She was the wife of a C of E minister and she was in her late forties, though on screen she looked older. She was dressed in a short dark jacket made of something heavy – chenille maybe – with a calf-length tweed skirt and low pumps. Her hair was short and neat. She was the type who would be sensible enough to carry an umbrella or tie a scarf around her head if it was raining, but it was a clear, cold day and her head was bare. Rose had spent the afternoon browsing the clothes boutiques in the centre of Frome, and had finished the excursion with the family’s weekly food shop in Somerfield. Before she’d begun loading the bags, she’d put her keys and the ticket to the car park on the front seat of the Yaris.

The sunlight behind her flickered and she lifted her head to see a man running fast down the ramp. He was tall and broad, in jeans and a Puffa jacket. Over his head he wore a rubber mask. A Santa Claus mask. To Caffery that was the creepiest part of it – the rubber mask bobbing along as the man raced towards Rose. The grin didn’t change or fade as he got close to her.

‘He said three words.’ The local inspector – a tall, austere guy in uniform who must also have been standing outside in the cold, judging by his red nostrils – nodded at the monitor. ‘Just here – as he comes up to her. He says, “Get down, bitch.” She didn’t recognize the voice and she’s not sure if he had an accent or not because he was shouting.’

The man grabbed Rose’s arm, cartwheeling her away from the car. Her right arm flew up, a piece of jewellery snapped and beads scattered, catching the light. Her hip slammed into the boot of the neighbouring car, catapulting her upper torso sideways over it, as if she was made of rubber. Her hair flew up from the scalp, her elbow made contact with the roof and she rebounded, whip-like,
falling away from the car and landing on her knees. By now the man in the mask was in the driver’s seat of the Yaris. Rose saw what he was doing and scrambled to her feet. She got to the car window and was tugging frantically at the door as the guy got the keys into the ignition. The car gave a small jolt as the handbrake came off, and shot backwards with a jerk. Rose staggered along next to it, half falling, half dragged, then the car braked abruptly, changed gear and skidded forwards. The movement loosened her grip and she fell away clumsily, rolling once, legs and arms in an ungainly crabbed position until she came to a halt. She recovered herself and raised her head just in time to see the car speed towards the exit.

‘What next?’ said Caffery.

‘Not much. We pick him up on another camera.’ The inspector aimed the remote control at the DVR box and shuffled through the different camera inputs. ‘Here – leaving the car park. He uses her ticket to get out. But the picture’s not so good on this feed.’

‘No prints on the barrier,’ said the inspector. ‘He’s wearing gloves. See them?’

‘Freeze it there,’ Caffery said.

The inspector paused the picture. Caffery bent closer to the screen, turning his head sideways to study the back window above the lit-up numberplate. When the case had been called in to MCIU, the unit superintendent, an unforgiving bastard who would screw an old woman to the floor if she had information that would improve his clear-up rates, told Caffery the first thing to check was whether or not the report was genuine. Caffery searched the shadows and reflective parts of the back windscreen. He could see something on the seat. Something pale and blurry.

The inspector turned and gave him a long look, as if he thought he was being tested. ‘Yes,’ he said slowly. ‘Why?’

Caffery didn’t answer. He wasn’t going to say out loud that the superintendent was worried about all the dickheads out there who’d been known, in the past, to invent a child on the back seat when their car had been jacked, thinking they’d get a higher alert attached to the police hunt for the vehicle. These things happened. But it didn’t look as if that was what Rose Bradley was up to.

The inspector aimed the remote control at the TV and flipped through the menu to the previous clip, to a point ninety seconds before the attack on Rose. The car park was empty. Just the sunlight in the entrance and the cars. As the time code flicked round to 4:31 the doors to the supermarket opened and Rose Bradley emerged, pushing the trolley. At her side came a small girl in a brown duffel coat. Pale, with blonde hair cut in a fringe, she wore pastel-coloured Mary Jane shoes, pink tights, and walked with her hands in her pockets. Rose unlocked the Yaris and the little girl opened the back door and crawled inside. Rose closed the door on her, put the keys and her car-park ticket on the front seat and went to the boot.

The inspector clicked off the TV and straightened. ‘Major Crime’s here. Whose case does that make it? Yours? Mine?’

‘No one’s.’ Caffery pulled his keys out of his pocket. ‘Because it’s never going to get that far.’

The inspector raised an eyebrow. ‘Says who?’

‘Says the statistics. He’s made a mistake – didn’t know she was in the car. He’ll dump her first chance he has. He’s probably already dropped her and the phone call’s just working its way through the system.’