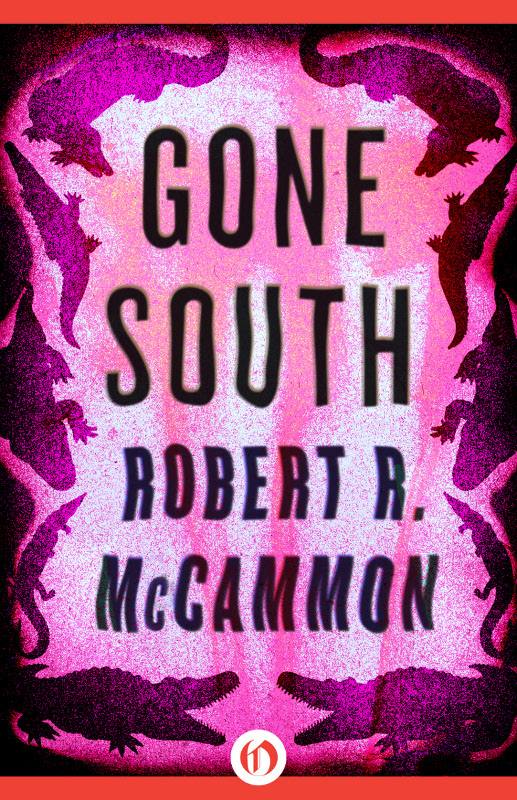 4. THE HAND OF CLINT

18. THE MOST DANGEROUS PLACE

FOREWARD
Why I Wrote
Gone South

T
HIS BOOK WAS MY
followup to
Boy’s Life,
and was written basically from a dark place of despair.

I’ve had difficulty writing this commentary, because it takes me back to a point in time that was not very happy. In fact, it was just before I started writing
Speaks the Nightbird,
and when I knew I had to do something drastic to keep my career going. So: unfortunately, no sunshine or smiley faces to be found in here. But since I’ve been asked to do this — and
paid
to do it, as well — I am fulfilling an obligation.

Bear in mind that I had thought
Boy’s Life
was the best book I’d written up to that point, and I was pretty much dashed down upon the hard rocks when I realized
Boy’s Life
was not going to get much — if any — promotion.
Gone South
was the second book in a two-book contract following
Boy’s Life.
It was really tough for me to get myself together and write it, thinking that a great opportunity for success had been mishandled.

Now, I hate to get back into all this, because some will say I ought to be glad I was ever published at all, and I certainly am. But let me assure you that the road leading to
Gone South
is littered with a lot of pain and disappointment, and it is impossible to say anything about why I wrote this book without dredging-up some of it.

Let me go back to the beginning of my career. I came into the business with the book
Baal,
published as a paperback original by Avon Books in 1978. At that time, Stephen King had just started to take off, the supernatural was “hot,” and publishers were looking for writers to get on the bandwagon. I was stuck in a dead-end job writing headlines at a local newspaper here in Birmingham, but I’d always enjoyed reading supernatural or “horror” fiction, and writing short stories in that particular genre, so I thought I’d try to write a book. Looking back, I don’t think
Baal
was a very good book, but it was the best I could do at the time.

Baal
was my first effort. I had no other “trunk novels,” as many writers do. So I basically learned how to write in public, for better or for worse.

I went through the early eighties as a horror writer, with most of my books being published as paperback originals. I was paid very well for these and I was on the track of doing a book every year. But in the late eighties I began to want more. I thought my writing was getting better, I was building a fan base, and I wanted to move away from doing strictly “horror” because I simply had other ideas I wanted to try. I also wanted my books to be published in hardback because I wanted them to remain on the shelves and get more attention than the average paperback receives.

But I started running into resistance. I was told repeatedly that my fans expected a certain type of book from me, and that was the bottom line. I suggested that I might try writing under a pseudonym, but I was told that wouldn’t work because then my fans “couldn’t find me.”

The point being, I was beginning to understand that I had a particular place in the publishing world  — that place was “horror” and I ought to be satisfied with where I was. At the same time, I drew the wrath of hardcore horror readers who thought I wasn’t bloody enough, or that I was at best a Stephen King imitator, and I drew the scorn of other writers (and booksellers) in my hometown because I wasn’t writing Southern fiction. Please understand that I’m not bashing “horror,” because I loved doing it and I reserve the right to go in that direction again if I want to. I’m bashing the idea that once you do a particular kind of writing, you’re expected to do that over and over until you die or — I guess — give up and stagger away.

I was in a book featuring Southern writers a few years ago. The chapter that profiles me has the heading of “Frustration.”

Now I’m getting to
Gone South.

Much has been made of my retirement from publishing for ten years or so. I tried to step out of the “horror” box, first with
Speaks the Nightbird
and then with a World War II novel called
The Village.
The latter novel got not a single offer. It was only by sheer luck and happenstance that
Speaks the Nightbird
was published by an Alabama publisher and in time I found my way back to the bright lights of New York.

The really
weird
thing about my career is that I sometimes feel everything would be okay if I went back to writing on the level of
Baal,
and if in some fractured insane universe I could be
happy
not wanting to grow or challenge myself or try to do anything that hasn’t already been done. For a writer  — or anyone in the arts, really — not doing something that involves risk is a path to a slow death. Here, of course, is the classic confrontation between business and the arts: one seeks to minimize risk, the other revels in it. It’s been true throughout history and is particularly true today, in this time of corporate mergers, falling stocks, and all the entertainments that are readily available to people who would rather not take the time or effort to read, or who see a book as a chore instead of a door.

Gone South
is a scream. It begins in fire and desolation and follows the plight of a Vietnam veteran named Dan Lambert, whose bad luck turns downright tragic when he gets in a fight with a bank’s loan manager, a gun goes off, and he finds himself on the run with a bounty on his head. On his trail are two bounty hunters, one a seasoned veteran with three arms and the second an addled Elvis Presley imitator.

Yes, there’s humor in the book. Sometimes you have to laugh while you’re screaming.

See, this
means
something to me.

I am not and have never been a writer just for money. I can’t be. An agent looked at me in anger one time and said, “Rick, just do the goddamned work!” But I can’t, if I don’t believe in it.

Gone South
is a journey from Hell back to the Garden of Eden. Back to a fresh start.

Back to being new again.

I told that once to a tableful of publishing executives. Blank stares followed.

But even if no one gets what I’m trying to do, or no one cares, this means something to me.

It means purity and hope, and struggle when you think you can’t go on another step, and laughing with bloody teeth in the fucking face of failure, and lighting a candle against the dark, and standing as firm as a human can against a howling wind, and going deep into yourself to find out what makes you tick, and what your limit of mental anguish is, and how long you can go without sleep.

All to create a world and people who did not exist before I gave them life and purpose. All to speak in my own voice about the world we live in and the people we are, and I hope you get the fact that my voice may be quiet under the voices of my people, but in no way am I silent about the things I think are meaningful, important, and valuable.

It does mean something to me. Almost everything.

It means enough to me to continue pushing that rock, again and again, with hopes that this time —
this
time — I may reach the top.

But it’s who I am, and it’s what I do. Sometimes I wouldn’t wish it on my worst enemy, but there you go. The good with the bad.

As you struggle along with Dan Lambert into the Louisiana swamp, with bounty hunters coming up behind you and your life in shambles, with no friends to call for help and nowhere to go but the deeper darkness that lies before you … fear not.

I have already been there.

And I came through just fine.

I
T WAS HELL’S SEASON,
and the air smelled of burning children.

This smell was what had destroyed Dan Lambert’s taste for barbecued pork sandwiches. Before August of 1969, the year he’d turned twenty, his favorite food had been barbecue crispy at the edges and drenched with sloppy red sauce. After the eleventh day of that month, the smell of it was enough to make him sick to death.

He was driving east through Shreveport on 70th Street, into the glare of the morning sun. It glanced off the hood of his gray pickup truck and stabbed his eyes, inflaming the slow ache in his skull. He knew this pain, and its vagaries. Sometimes it came upon him like a brute with a hammer, sometimes like a surgeon with a precise scalpel. During the worst times it hit and ran like a Mack truck and all he could do was chew on his rage and lie there until his body came back to him.

It was a hard thing, dying was.

In this August of 1991, a summer that had been one of the hottest in Louisiana’s long history of hellish seasons, Dan was forty-two years old. He looked ten years older, his rawboned, heavily lined face a testament to his ceaseless combat with pain. It was a fight he knew he couldn’t win. If he knew for certain he would live three more years, he wasn’t sure if he’d be happy about it. Right now it was day-to-day. Some days were all right, some weren’t worth a bucket of warm spit. But it wasn’t in his nature to give up, no matter how tough things got. His father, the quitter, had not raised a quitter. In this, at least, Dan could find strength. He drove on along the arrow-straight line of 70th Street, past strip malls and car lots and fast-food joints. He drove on into the merciless sun and the smell of murdered innocents.

Lining the commercial carnival of 70th Street was a score of barbecue restaurants, and it was from their kitchen chimneys that this odor of burned flesh rose into the scalded sky. It was just after nine, and already the temperature sign in front of the Friendship Bank of Louisiana read eighty-six degrees. The sky was cloudless, but was more white than blue, as if all the color had been bleached from it. The sun was a burnished ball of pewter, a promise of another day of misery across the Gulf states. Yesterday the temperature had hit a hundred and two, and Dan figured that today it was going to be hot enough to fry pigeons on the wing. Afternoon showers passed through every few days, but it was just enough to steam the streets. The Red River flowed its muddy course through Shreveport to the bayou country and the air shimmered over the larger buildings that stood iron-gray against the horizon.