Read Gonji: The Soul Within the Steel: The Deathwind Trilogy, Book Two Online

Gonji: The Soul Within the Steel: The Deathwind Trilogy, Book Two 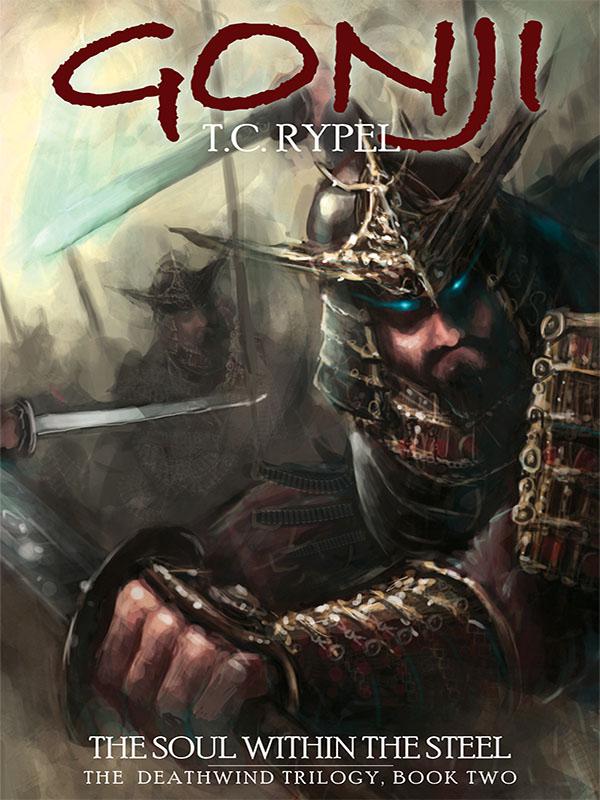 WHAT HAS GONE BEFORE... 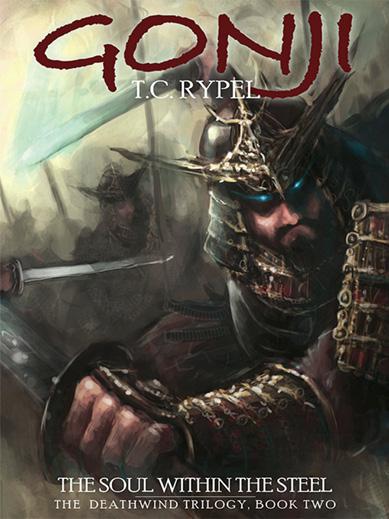 1.
Gonji: Red Blade from the East

2.
Gonji: The Soul Within the Steel

my most honorable parents,

Breathes there the man with soul so dead,

Who never to himself hath said,

This is my own, my native land!

Whose heart hath ne’er within him burned,

As home his footsteps he hath turned

From wandering on a foreign strand?

—Sir Walter Scott,
The Lay of the Last Minstrel

In looking on the happy Autumn fields,

And thinking of the days that are no more... 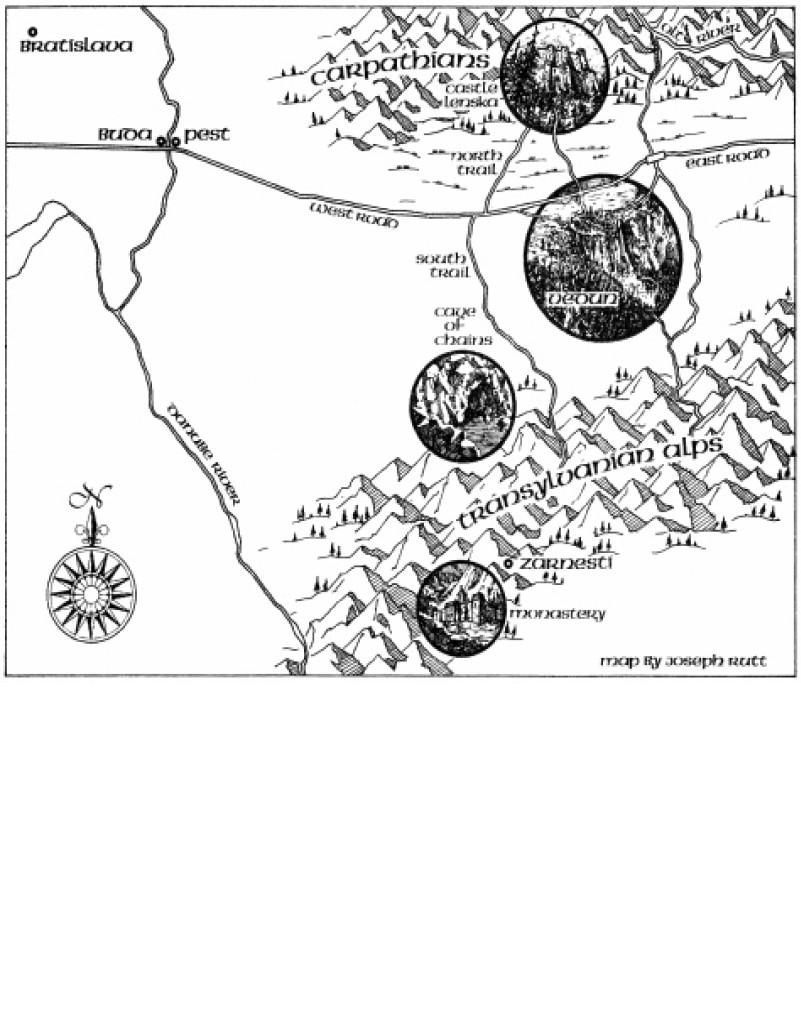 WHAT HAS
GONE BEFORE...

It is the sixteenth century in Central Europe. A time when sorcerous power, enchanted men, and the haunting things of darkness are receding to the fringes of human concern as men become increasingly urbanized and enlightened. Belief in the eldritch things wanes, but like a dying beast that rears its head for a last plunge at its conqueror, the powers of darkness combine for a final onslaught on a microcosm of humanity.

A half-breed samurai named Gonji Sabatake, son of a powerful Japanese daimyo but cast by circumstances in the role of an itinerant ronin, a landless wanderer, travels through Europe in search of the legendary Deathwind, the Beast with the Soul of a Man. He encounters primal horrors in the dreaded Carpathians, then rescues and joins a company of mercenaries in the employ of a mysterious nomadic king, Klann the Invincible. The king’s origin and purpose are cloaked in half-understood tales and legends; few can claim to ever having seen him, though they pledge him their undying loyalty.

Riding with the 3rd Royalist Free Company for a space of days, Gonji learns much of the strange wandering army and its erratic and evil sorcerer, Mord. He grows disgusted with the apparently meaningless outrages he helps them perpetrate and soon falls into disfavor. Gonji is ultimately forced to flee the company after a deadly clash.

Doubling back to a scene of earlier carnage, the samurai is charged by a horribly disfigured priest to convey a message to someone named Simon Sardonis, whom he will find in the city of Vedun. Attacked by a wyvern, a vile flying beast, he is shamed beyond words by his panicked flight. He commits himself to its eventual destruction.

Bringing with him the body of a boy beaten to death in the forest by mercenaries in Klann’s hire, Gonji enters the ancient walled city of Vedun, a citadel perched on a Carpathian plateau-aerie. He finds the city already occupied by Klann’s army, the magnificent castle of the Lord Protector of the province, Baron Rorka, successfully breached by Klann in a single night’s siege.

Gonji learns that the dead boy was the brother of an important council member, Michael Benedetto, and thus becomes immersed in political intrigue from the outset. Although initially uncommitted to either side, he gradually comes to side with the citizens, who are divided over a course of action. The pacifist faction is led by the Council Elder, Flavio; the militants, by the volatile guildsman Phlegor and a fiery, iron-willed prophetess named Tralayn.

As enmity between Gonji and Klann’s forces, human and inhuman, increases, so dawns his affection for the city and some of its inhabitants, notably, the blacksmith Garth Gundersen and one of his sons, Wilfred. A lovely deaf-mute girl named Helena becomes enamored of him; and he, in turn, of Michael Benedetto’s wife, Lydia.

Through a series of wild adventures and curious circumstances, the half-breed oriental swiftly rises to a position of influence in the city, though it is, to be sure, a tenuous position, weakened by distrust and bigotry. In a fit of pique, obeying the dictates of his moody disposition and the cry of his empty purse, he hires on as a spy for Klann with Captain Julian Kel’Tekeli, whom he has come to hate. But ever the seeker after noble duty, he also contrives to enter the employ of Flavio, as his personal bodyguard. His love of control, attention, and military game-playing thus satisfied, and characteristically mistaking serendipity for fate, he sees himself committed (in his compromising, half-Western fashion) by the bushido code to following the situation through to the conflict he feels is inevitable. Furthermore, the key to his Deathwind quest—and the now more intriguing mystery of Simon Sardonis—seems to be withheld from him by certain fearful city leaders.

As RED BLADE FROM THE EAST closes, Gonji manipulates himself into the city delegation to the castle banquet being held by the legendary King Klann the Invincible, who has suddenly decided to break with his reclusive tradition.

General Gorkin, the castellan, marched through the dank corridors toward the king’s chamber. He cradled his helm under a burly arm. His face had an anxious set, jaw muscles rigid.

The general turned into an arch that flanked a shadowed stone stairway, and the huge form jumped him from behind with a fierce battle cry. Gorkin uttered a broken outcry as he was wrestled to the ground. Thick arms squeezed him mightily, stole his wind. He gritted his teeth and strained to break the locked fists at his belly. Then he recognized the labored laughter at his ear.

He tautened and looked back, bewildered, into the face of King Klann.

“You’ve gone soft on us, Gorkin,” the king jested as they sorted themselves out and pushed up onto their feet.

“We weren’t able to take you so readily in the past. But, then, it’s been a stretch since we’ve tilted.” The king mopped his brow with a sleeve. “But no more! Things will change around here. Yes, indeed. We’re feeling marvelous this morning, Gorkin! And how is our castellan?”

“Fit, sire,” the general said, breathing hard, “but troubled. I’ve just been out in the ward, at the practice ground. I found the—”

“Yes, so you did—you saw the free companions enjoying the run of the place, that’s what’s bothering you, eh?” Klann smiled. “Yes, it was on my order. The mercenaries have need of training just as the Llorm do. More so, no doubt. And it will keep them out of mischief. They may have the run of the ward, just so there are no firearms.”

“All right, my liege, if that is your wish.”

“That is our wish, old friend. It’s time for some changes. Time for us to shuck our reclusive image. Yo, but I’m feeling grand this morning! Tonight’s the banquet, you know.” Klann amiably slapped Gorkin on the back.

Two scullions, drawn from their tasks by the clatter in the corridor, peered around a corner at them. They goggled to see the king and castellan in such a scruffy, soiled state and hurried back to work.

Klann and Gorkin walked through the maze of corridors toward the outdoors, toward Castle Lenska’s expansive wards. They passed chambers jammed with common folk, with the thin, pale dark-haired people who were all that remained of the once proud Akryllonian island race. Hollow-eyed children of Klann’s Llorm regulars, worn and wearied by the travails of their nomadic life, wandered about the halls. Listlessly, for the most part. Of late they had seemed to be looking worse. They bowed or knelt at their beloved king’s passing. Some were yanked out of his path by scolding mothers, who were in turn admonished by Klann to let them be. He patted young heads affectionately, warmed to see them smile.

“Look at them, Gorkin,” Klann said. “They’re looking better already, I think, to be relieved of life on the road.” He sighed. “These are the important ones. They’re us...our hope and legacy...all that remains of the glory that was Akryllon.”

“Akryllon will again be glorious, my liege.”

“I wonder,” Klann responded gravely. “When was the last birth in the army?”

“It was
four
months ago. Think back. It was during the severe spring storm in Austria. Remember now?”

Hope Renewed by S.M. Stirling, David Drake
The Living Throne (The War of Memory Cycle Book 3) by H. Anthe Davis
Death Spiral by Janie Chodosh
No Graves As Yet by Anne Perry
Unfaithfully Yours by Nigel Williams
Wishing in Wisconsin (At the Altar Book 3) by Kirsten Osbourne
Chronicles of Steele: Raven 2: Episode 2 by Pauline Creeden
The Sexual Life of Catherine M. by Catherine Millet
The Book of My Lives by Aleksandar Hemon
Prince William by Penny Junor