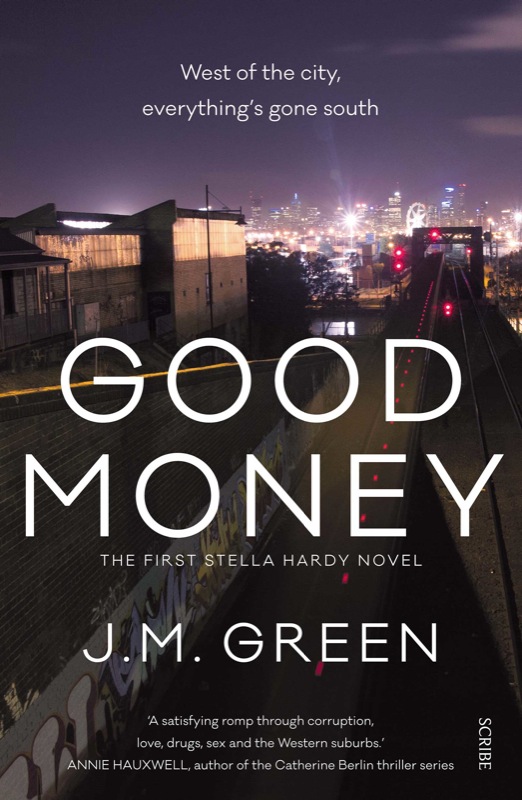 J.M. Green studied professional writing at RMIT.
Good Money
, her first novel, was shortlisted for the 2014 Victorian Premier's Literary Award for an unpublished manuscript. She lives in Melbourne's western suburbs. 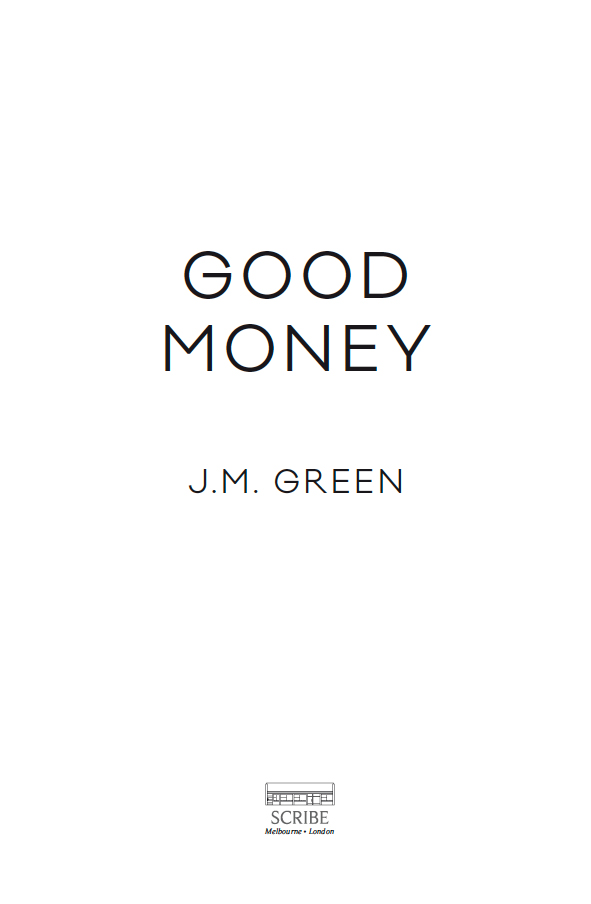 First published by Scribe in 2015

For Clinton and Morrigan

MY BEDROOM.
Population: one. I was horizontal under the covers, imitating sleep, when my mobile buzzed. I felt my way around the dark room to my coat hanging on the doorknob, and reached in the pocket. 3.56am. Good news then.

My finger swiped the screen. âYes?'

âThis is Constable Ross, Flemington Police. Am I speaking with Stella Hardy?'

Raewyn Ross was a serious, square-bottomed recruit with whom, for my sins, I had occasional dealings. I was tempted to tell her she was mistaken, that there was no such person. Instead, I allowed my feet to slide across the carpet until my arse came to rest on a pile of clothes. âYes.'

âSorry to call so late. I'm with a Mrs Chol, from the flats here. She's asked me to call you. It's her eldest boy, Adut.'

âAh. Not as such, I'm afraid. Actually, that person is deceased.'

She spoke in the monotone favoured by some members of the force. I suspected they had their personalities drained during basic training.

Social workers, on the other hand, were another genus entirely.
Bleedingus
heartius
. I did a professional development course once, and the trainer was one of those personality-test fanatics. He said social workers were all the same, always figuring in the same quadrant â an excess of empathy, surplus imagination. But that was years ago. I was in my forties now, and running low on both.

I called a cab and then foraged the flat for my least-dirty jeans and a jumper. I brushed my hair â tufts of dark frizzle, uncut since Jacob (this was not because of some oath; rather, for the melancholy, grooming was a chore, and chores were the first to go). My energy went into breathing, going to work, watching TV, then repeating â¦ and had for over a year.

The taxi showed and I ran down to the street. It was a filthy night: the wind was whipping the trees about, and rain was hammering the footpath. The taxi dropped me outside the Flemington Housing Commission complex on Racecourse Road. Mrs Chol's flat was near the top of one of its towers. I dashed into the pong of the graffiti-stained foyer. In the lift, I wondered who else I might see in Mrs Chol's place â cops from the African Liaison Unit perhaps, maybe a grief counsellor. A woman I didn't know opened the door with a hushed â
Ahlan wasahlan
'
. I looked past her. Other than fellow residents of the flats, all of them women, there was only Ross. â
Ahlan biiki
,' I answered, and the woman who held the door nodded, and gestured for me to come through.

Compared to my modest quarters, the commission flats were spacious. Mrs Chol's flat had a large sitting room that opened to the kitchen, with the bathroom and three bedrooms down a dark hallway. It had an easy, comfortable feel; but every time I visited, it was the view that impressed me. It took in most of the south-west corner of the city, round-the-clock glittering.

Constable Ross was sitting forward on the bones of her arse on the best seat in the room, looking acutely ill at ease. More neighbours arrived, bringing food. Two women speaking Amharic were working in the kitchen next to a woman in a sari, who was making tea. Mrs Chol was nowhere to be seen, but then she came into the room, aided by two women, and dropped onto an armchair. I knelt on the floor beside her. Her swollen eyes looked at me without recognition, until her arm came around my shoulder and she bent her face to mine.

âThank you for coming.' A terrible duel for control was going on. Her hands shook but her expression was opaque and her back was erect, the chin raised in defiance.

Sitting on the sofa were the three little Chol girls. One held a small plastic doll and was singing softly. I realised with a shock it was a modified version of Lorde's âRoyals'. I sat next to her. âOur brother died,' she told me calmly.

Lost for words, I touched the doll's blonde hair. âShe's nice. What's her name?' But the girl kept singing and didn't answer.

âOur uncles will be here tomorrow,' said the oldest girl, who was about nine and had her most serious-looking expression on. She had her arm around the youngest, who was five.

Mabor stood by himself, leaning against the wall. He was nothing like Adut. Rather, he was straight-laced and academically gifted â he worked hard at school, kept to himself, and studied on weekends. I had seen him at the Union Road library more than once. He told me it was better than his school library because it was quiet and he always got a computer. Tonight, however, he was kitted out like some hooligan, like his brother, in a Nike hoodie and with his jeans slung low on his hips. There was a dark stain above one knee. He glanced in my direction, our eyes met, and he looked away.

I approached Ross, who had a plate of cake balanced on her lap, and she gave me a grateful look. âHardy.' She nodded at me. âBad night.' And she bit off a chunk of cake.

âSoaking rain, the good sort. Keeps the farmers happy.' A private joke with myself, since farmers were never actually happy.

Ross concurred with frenzied nodding. It was a pity she was so credulous; her humour deficit didn't do her any favours with her colleagues at the station.

Ross fished out her notebook, still chewing, taking her time to swallow. âJust before midnight, a person employed as a kitchen hand from the Knock Knock bar and restaurant in Kensington was taking the bins out to the alleyway at the rear of the property when he saw a youth of African appearance staggering towards him. The victim was clutching his chest, then collapsed.' She looked up at me. âBlood pissing out everywhere, he reckons. Pretty brutal attack.' She went back to her notes. âThat person then called the ambulance, but the teenager was pronounced on the way to hospital.'

âLooking for security-camera footage in the area.' Ross put the notebook away.

âNot yet, early days.' She yawned and eyed the kitchen. âAren't they at war or something?'

âIf you mean the Ethiopian women, I guess they left all that behind. Mrs Chol is a nice neighbour who needs their support.' I looked at Ross, at her dull, uncomprehending eyes. âBecause it's tragic â the kid was only sixteen.'

âNo, you go.' She was depressing me with her tough-cop act. âTalk to you tomorrow.'

She handed me her empty plate and slipped out the front door. I took the plate to the kitchen thinking that, of all the kids to end up murdered, Adut Chol was not the type. He didn't have that self-destruct gene you sometimes see in the risk-takers, the death-wish types. You do all you can for them, but a short life or a long stretch was on the cards. And he wasn't one of those passive kids who breathed bad luck in from the family gas chamber, soaked in it, always seeming to attract catastrophe. He wasn't even a proper delinquent. He could be sweet, he loved his sisters, and he helped his mother. Then, again, it was true that most of his friends were street thugs â an inept crew that started the day with a morning bong or snort, and spent the rest of it half-pissed, looking for low-grade trouble. Because he was smart, I had thought it was a phase. I thought Adut Chol's
gangsta
shtick was bullshit.

Mrs Chol was staring at the floor, distress and pain now setting in. That sight would not be easily erased from my memory. I was thinking of leaving, when she fell off the chair to her knees and, with a sudden fury, started hitting herself, slapping her face, and rocking and sobbing. I got down next to her and held onto her hands. Other women came to comfort her. In the commotion, she howled and we held her down, all of us.

The eldest daughter came and took her mother's hand, pulling her. Together, we helped her to her feet. The neighbour who'd let me in, a calm woman with grey hair in a neat bun, put her arm around Mrs Chol's shoulders. âRest, now,' she said, in a soothing voice. âTime for rest.' She took one hand and I held the other, and Mrs Chol allowed herself to be taken to her bedroom. At the doorway, she called for her daughters. They ran to her and climbed on the bed. The neighbour pulled the bedspread over them all and shut the door.

I went to the window near Mabor and pulled the curtain back a little. The city lights dazzled, and the neon spokes of the mutant Ferris wheel strobed wildly. It seemed excessive, like a Dickensian urchin, unfortunate and trying too hard to be liked. Behind me, a woman's voice was singing a terrible lament. It took me a moment to recognise it was Rihanna. It stopped when Mabor put his mobile to his ear. He walked away, whispering, and disappeared into the hallway.

The women were leaving. The last two were in the kitchen finishing the dishes, and they refused my offer to help. I went down the hall to the bedroom that Mabor shared with Adut. The door was ajar, and I pushed it open. Two single beds were separated by a table piled with textbooks. All the drawers of a dresser were open and empty. On one of the beds were little towers of clothes. On the other was a sports bag, unzipped. Mabor stood beside the open wardrobe, a small stack of books in his arms. I knocked on the doorframe.

âGet out,' he said, and dumped the books in the bag.

âIt's a terrible thing, to lose a brother,' I said.

He looked at the ceiling and breathed through his mouth. âYou reckon?'

I came in and moved a pile of clothes to sit on a corner of the bed. He watched me warily. âYou know who Adut was seeing tonight?'

âDon't know, miss.' He leaned his head against the wardrobe.

âOkay. But if you know something that might help the police â'

âYou expect me to tell other people his business?'

âAdut was right about you. He reckoned you were a fake, you were up to something. He told Mum not to trust you.'