Good Muslim, Bad Muslim: America, the Cold War, and the Roots of Terror 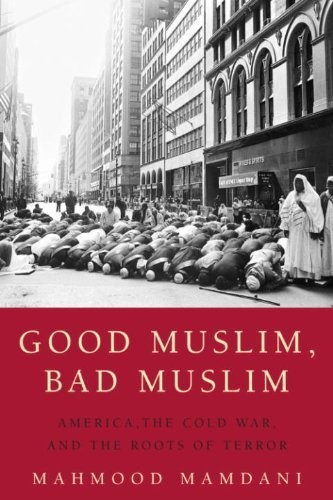 When Victims Become Killers:
Colonialism, Nativism, and the Genocide in Rwanda

Citizen and Subject
:
Contemporary Africa and the Legacy of Late Colonialism

The Myth of Population Control

From Citizen to Refugee

Politics and Class Formation in Uganda

And all children everywhere

Who will inherit the world we make

Chapter One
Culture Talk; or, How Not to Talk About Islam and Politics

Chapter Three
Afghanistan: The High Point in the Cold War

Conclusion
Beyond Impunity and Collective Punishment

This book grew out of a talk at Riverside Church on the Upper West Side of New York City in the weeks after 9/11. To bear an identifiably Muslim name then was to be made aware that Islam had become a political identity in post-9/11 America. In the talks that took place—from New York and Chicago in the United States to Kampala and Durban in Africa—I set about trying to understand the modern tendency to politicize culture and, in that context, the forging of political Islam and political terror during the Cold War.

Along that journey, I got invaluable help from three friends, Talal Asad of City University of New York, Tim Mitchell of New York University, and Bob Meister of the University of California at Santa Cruz. If I have made mistakes in spite of their careful guidance, the fault is surely only mine. The same cannot be said of my graduate students who made the journey with me and who sometimes anticipated a discovery, and often joined me in making one: Suren Pillay, Brenda Coughlin, and Yogesh Chandrani gave research assistance beyond the call of duty, even friendship. Finally, many thanks to my editor, Shelley Wanger of Pantheon, for insisting that I leave aside all circumlocutions and face the reader directly.

Without loved ones, writing would surely be too lonely an exercise to bear for long. Mira, as always, continues to nourish with love and inspire by example, teaching how to make things happen, no matter the odds. Ammy, Daddy, and Anis gave Zohran the comfort of home in Kampala and made it possible for me to write for extended stretches.

My mother, Ammy, was an ongoing inspiration for this book. A woman of such strong religious conviction that as a child she went to a Catholic convent school in the mornings and an Islamic
madrassah
in the afternoons; she remained incessantly curious about the world in spite of—maybe because of—the fact that she had no more than four years of formal schooling; she combined two great virtues, to struggle for justice no matter what the odds and to remain fair-minded and full of empathy while doing so. I hope this book will help celebrate Ammy’s life and make some of its lessons available to, among others, our son Zohran, and his mates in Kampala and Capetown, New York and New Delhi and Dar-es-Salaam. I close with the comforting thought that, together, they will no doubt remake the world they inherit from us.

W
e have just ended a century of violence, one possibly more violent than any other in recorded history: world wars and colonial conquests; civil wars, revolutions, and counterrevolutions. Although the magnitude of this violence is staggering, it does not astound us.

The modern political sensibility sees most political violence as necessary to historical progress. Since the French Revolution, violence has come to be seen as the midwife of history. The French Revolution gave us terror, and it gave us a citizens’ army. The real secret behind Napoleon’s spectacular battlefield successes was that his army was not made up of mercenaries but patriots, who killed for a cause, inspired by national sentiment—what we have come to recognize as the civic religion of nationalism. Reflecting on the French Revolution, Hegel wrote that man was willing to die for a cause of greater value to him than life itself. Maybe Hegel
should have added: man is also willing to
kill
for such a cause. This, I think, is truer of our times than it was in the past.

Such violence gets discussed in two basic ways: in cultural terms for a premodern society and theological terms for a modern society. The cultural explanation always attributes political violence to the absence of modernity. On a world scale, it has been called a clash of civilizations. Locally—that is, when it does not cross the boundary between “the West” and the rest—it is called “communal conflict,” as in South Asia, or “ethnic conflict,” as in Africa.

Political violence in modern society that does not fit the story of progress tends to get discussed in theological terms. The violence of the Holocaust, for example, is explained as simply the result of evil. Like premodern culture, evil too is understood outside of historical time. There is huge resistance, both moral and political, to exploring the historical causes of the Nazi genocide. By seeing the perpetrators of violence as either cultural renegades or moral perverts, we are unable to think through the link between modernity and political violence.

The Modern State and Political Violence

The year 1492 was the onset of the European Renaissance and the birth of political modernity. It is also the year Christopher Columbus set sail for the New World and the year the armies of King Ferdinand and Queen Isabella conquered the city-state of Granada, then seen as the last Muslim stronghold in western Christendom.
Thus, 1492 stands as a gateway to two related endeavors: one the unification of the nation, the other the conquest of the world.

Europe on the threshold of political modernity thought of the nation in terms of culture and race. In the Spain of Ferdinand and Isabella, the nation was first and foremost Christian. The unification of Spain began with an act of ethnic cleansing: 1492 was also the year Ferdinand and Isabella signed the Edict of Expulsion, designed to rid Spain of its Jews. The unified Spanish state gave its Jews a stark choice: baptism or deportation. It is estimated that about seventy thousand Spanish Jews converted to Christianity and remained in Spain, only to be plagued by the Inquisition, which accused them of insincerity. Of the remaining 130,000, an estimated 50,000 fled to the North African and Balkan provinces of the Ottoman empire—where they were warmly welcomed—and about 80,000 crossed the border into Portugal. The expulsion from Spain came at the close of a century that had witnessed the expulsion of Jews from one part of Europe after another. In 1499, seven years after the Edict of Expulsion, the Spanish state gave its Muslims the same choice: convert or leave.

So the history of the modern state can also be read as the history of race, bringing together the stories of two kinds of victims of European political modernity: the internal victims of state
building and the external victims of imperial expansion. Hannah Arendt noted this in her monumental study on the Holocaust, which stands apart for one reason: rather than talk about the uniqueness of the Holocaust, Arendt sited it in the imperial history of genocide. The history she sketched was that of European settlers killing off native populations. Arendt understood the history of imperialism through the workings of racism and bureaucracy, institutions forged in the course of European expansion into the non-European world: “Of the two main political devices of imperialist rule, race was discovered in South Africa, and bureaucracy in Algeria, Egypt and India.” Hannah Arendt’s blind spot was the New World. Both racism and genocide had occurred in the American colonies earlier than in South Africa. The near decimation of Native Americans through a combination of slaughter, disease, and dislocation was, after all, the first recorded genocide in modern history.

The idea that “imperialism had served civilization by clearing inferior races off the earth” found widespread expression in nineteenth-century European thought, from natural sciences and philosophy to anthropology and politics. When Lord Salisbury, the British prime minister, claimed in his famous Albert Hall speech on May 4, 1898, that “one can roughly divide the nations of the world into the living and the dying,” Hitler was but nine years old, and the European air was “soaked in the conviction that imperialism is a biologically necessary process which, according to the laws of nature, leads to the inevitable destruction of lower races.” Its paradigmatic example was in Tasmania, an island the size of Ireland where European colonists arrived in 1803, the first massacre of natives occurred in 1804, and the last original inhabitant died in 1869. Similar fates awaited, among others, the Maoris of New Zealand and the Herero of German South West Africa.

By the beginning of the twentieth century, it was a European habit to distinguish between civilized wars and colonial wars. The laws of war applied to wars among the civilized nation-states, but laws of nature were said to apply to colonial wars, and the extermination of the lower races was seen as a biological necessity. In
A History of Bombing
, Sven Lindqvist writes that bombing originated as a method of war considered fit for use only against uncivilized adversaries. The first bomb ever dropped from an airplane was Italian, and it exploded on November 1, 1911, in an oasis outside Tripoli in North Africa. The first systematic aerial bombing was carried out by the British Royal Air Force against the Somalis in 1920. In the Second World War, Germany observed the laws of war against the western powers but not against Russia. As opposed to 3.5 percent of English and American prisoners of war who died in German captivity, 57 percent of Soviet prisoners—3.3 million in all—lost their lives. The gassings of Russians by Germans preceded the gassings at Auschwitz—the first mass gassings were of Russian prisoners of war in the southern Ukraine. Russian intellectuals and Communists were the first to be gassed in Auschwitz. The Nazi plan, writes Sven Lindqvist, was to weed out some 10 million Russians, with the remainder kept alive as a slave-labor force under German occupation. When the mass murder of European Jews began, the great Jewish populations were not in Germany but in Poland and Russia, where they made up 10 percent of the total population and up to 40 percent of the urban population “in just those areas Hitler was after.” The Holocaust was born at the meeting point of two traditions that marked modern Western civilization: “the anti-Semitic tradition and the tradition of genocide of colonized peoples.” The difference in the fate of the Jewish people was that they were to be exterminated as a whole. In that, they were unique—
but only in Europe.

Why Lords Lose Their Hearts by Manda Collins
The Dead Season by Donna Ball
Apollo and Val: #5.5 (Luna Lodge Book 0) by Stevens, Madison
No Return (The Internal Defense Series) by Zoe Cannon
The Grand Crusade by Michael A. Stackpole
Stealing Light by Gary Gibson
The Death of Promises by David Dalglish
Christmas in Bluebell Cove by Abigail Gordon
Reluctant Prince by Dani-Lyn Alexander
A Week in Summer: A Short Story by Binchy, Maeve