Read Grandma Gatewood's Walk: The Inspiring Story of the Woman Who Saved the Appalachian Trail Online

Grandma Gatewood's Walk: The Inspiring Story of the Woman Who Saved the Appalachian Trail 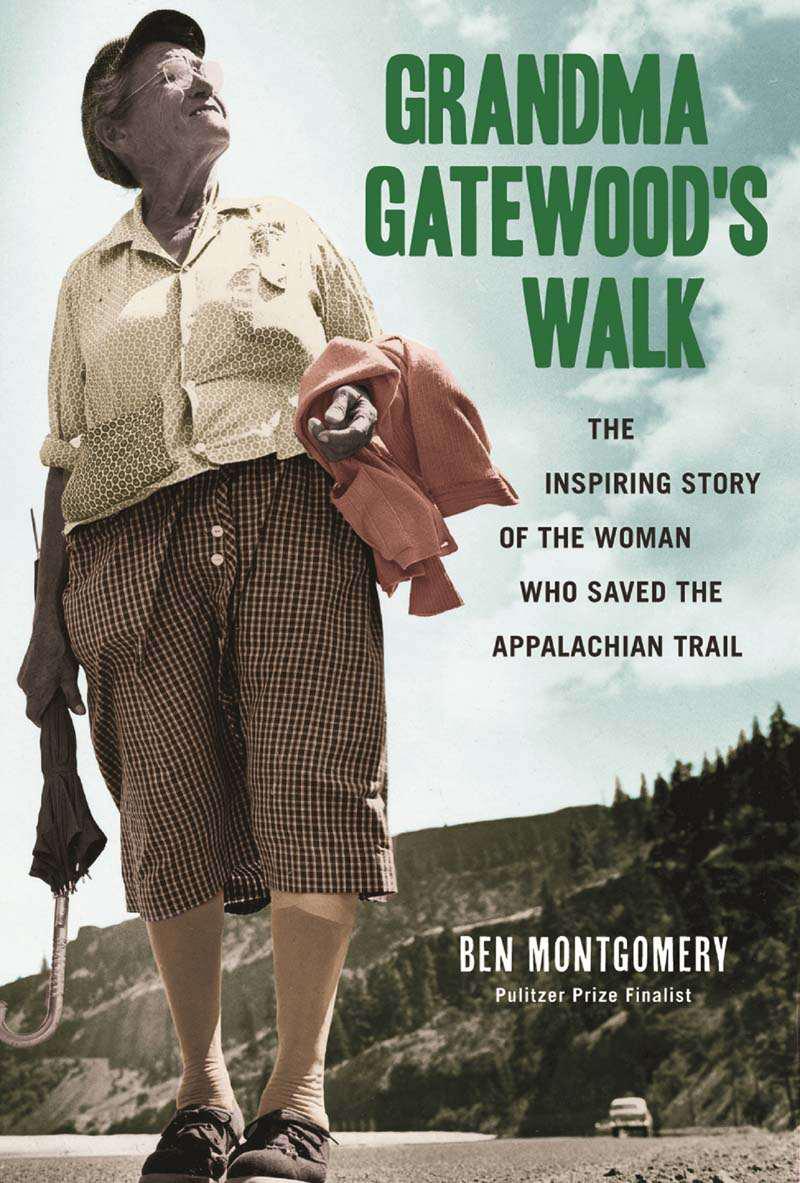 EMMA GATEWOOD TOLD HER FAMILY SHE WAS
going on a walk and left her small Ohio hometown with a change of clothes and less than two hundred dollars. The next anybody heard from her, this genteel, farm-reared, 67-year-old great-grandmother had walked 800 miles along the 2,050-mile Appalachian Trail. And in September 1955, having survived a rattlesnake strike, two hurricanes, and a run-in with gangsters from Harlem, she stood atop Maine’s Mount Katahdin. There she sang the first verse of “America, the Beautiful” and proclaimed, “I said I’d do it, and I’ve done it.”

Grandma Gatewood, as the reporters called her, became the first woman to hike the entire Appalachian Trail alone, as well as the first person— man or woman—to walk it twice and three times. Gatewood became a hiking celebrity and appeared on TV and in the pages of
Sports Illustrated.
The public attention she brought to the little-known footpath was unprecedented. Her vocal criticism of the lousy, difficult stretches led to bolstered maintenance, and very likely saved the trail from extinction.

Author Ben Montgomery was given unprecedented access to Gatewood’s own diaries, trail journals, and correspondence, and interviewed surviving family members and those she met along her hike, all to answer the question so many asked: Why did she do it? The story of Grandma Gatewood will inspire readers of all ages by illustrating the full power of human spirit and determination. Even those who know of Gatewood don’t know the full story—a story of triumph from pain, rebellion from brutality, hope from suffering.

“Just as Emma Gatewood helped save the Appalachian Trail from years of neglect and preserve it for generations of hikers, Ben Montgomery has kept her unbelievable story alive for anyone who loves the outdoors, underdogs, heroic women, and amazing tales. I wish I’d read it while standing on top of a mountain, but I almost felt as if I was.”

—Thomas Mullen, author of
The Last Town on Earth

“In
Grandma Gatewood’s Walk,
a storyteller’s storyteller digs deep into the long-forgotten tale of an inspiring journey, bringing forth a transcendent story of dignity, independence, and the dynamic human spirit.”

“With rich reporting and often poetic prose, Ben Montgomery takes readers on an intimate, backwoods adventure with a resolute old lady. Along the way, he explores the history of hikers and highways, the solace of nature and solitude—and the urge to escape.”

Grandma Gatewood’s walk : the inspiring story of the woman who saved the Appalachian Trail / Ben Montgomery.

We do not go into the woods
to rough it; we go to smooth it.
We get it rough enough at home.

I get faster as I get older.

1
Pick Up Your Feet

17
Aloneness More Complete than Ever

1
PICK UP YOUR FEET

She packed her things in late spring, when her flowers were in full bloom, and left Gallia County, Ohio, the only place she’d ever really called home.

She caught a ride to Charleston, West Virginia, then boarded a bus to the airport, then a plane to Atlanta, then a bus from there to a little picture-postcard spot called Jasper, Georgia, “the First Mountain Town.” Now here she was in Dixieland, five hundred miles from her Ohio home, listening to the rattle and ping in the back of a taxicab, finally making her ascent up the mountain called Oglethorpe, her ears popping, the cabbie grumbling about how he wasn’t going to make a penny driving her all this way. She sat quiet, still, watching through the window as miles of Georgia blurred past.

They hit a steep incline, a narrow gravel road, and made it within a quarter mile of the top of the mountain before the driver killed the engine.

She collected her supplies and handed him five dollars, then one extra for his trouble. That cheered him up. And then he was gone, taillights and dust, and Emma Gatewood stood alone, an old woman on a mountain.

Her clothes were stuffed inside a pasteboard box and she lugged it up the road to the summit, a few minutes away by foot. She changed in the woods, slipping on her dungarees and tennis shoes and discarding the simple dress and slippers she’d worn during her travels. She pulled from the box a drawstring sack she’d made back home from a yard of denim, her wrinkled fingers doing the stitching, and opened it wide. She filled the sack with other items from the box: Vienna Sausage, raisins, peanuts, bouillon cubes, powdered milk. She tucked inside a tin of Band-Aids, a bottle of iodine, some bobby pins, and a jar of Vicks salve. She packed the slippers and a gingham dress that she could shake out if she ever needed to look nice. She stuffed in a warm coat, a shower curtain to keep the rain off, some drinking water, a Swiss Army knife, a flashlight, candy mints, and her pen and a little Royal Vernon Line memo book that she had bought for twenty-five cents at Murphy’s back home.

She threw the pasteboard box into a chicken house nearby, cinched the sack closed, and slung it over one shoulder.

She stood, finally, her canvas Keds tied tight, on May 3, 1955, atop the southern terminus of the Appalachian Trail, the longest continuous footpath in the world, facing the peaks on the blue-black horizon that stretched toward heaven and unfurled before her for days. Facing a mean landscape of angry rivers and hateful rock she stood, a woman, mother of eleven and grandmother of twenty-three. She had not been able to get the trail out of her mind. She had thought of it constantly back home in Ohio, where she tended
her small garden and looked after her grandchildren, biding her time until she could get away.

When she finally could, it was 1955, and she was sixty-seven years old.

She stood five foot two and weighed 150 pounds and the only survival training she had were lessons learned earning calluses on her farm. She had a mouth full of false teeth and bunions the size of prize marbles. She had no map, no sleeping bag, no tent. She was blind without her glasses, and she was utterly unprepared if she faced the wrath of a snowstorm, not all that rare on the trail. Five years before, a freezing Thanksgiving downpour killed more than three hundred in Appalachia, and most of them had houses. Their bones were buried on these hillsides.

She had prepared for her trek the only way she knew how. The year before, she worked at a nursing home and tucked away what she could of her twenty-five-dollar-a-week paycheck until she finally earned enough quarters to draw the minimum in social security: fifty-two dollars a month. She had started walking in January while living with her son Nelson in Dayton, Ohio. She began walking around the block, and extended it a little more each time until she was satisfied by the burn she felt in her legs. By April she was hiking ten miles a day.

Before her, now, grew an amazing sweep of elms, chestnuts, hemlocks, dogwoods, spruces, firs, mountain ashes, and sugar maples. She’d see crystal-clear streams and raging rivers and vistas that would steal her breath.

Before her stood mountains, more than three hundred of them topping five thousand feet, the ancient remnants of a range that hundreds of millions of years before pierced the clouds and rivaled the Himalayas in their majesty. The Unakas, the Smokies, Cheoahs, Nantahalas. The long, sloping Blue Ridge; the Kittatinny Mountains; the Hudson Highlands. The Taconic Ridge and
the Berkshires, the Green Mountains, the White Mountains, the Mahoosuc Range. Saddleback, Bigelow, and finally—five million steps away—Katahdin.

And between here and there: a bouquet of ways to die.

There were a million heavenly things to see and a million spectacular ways to die.

Two people knew Emma Gatewood was here: the cabdriver and her cousin, Myrtle Trowbridge, with whom she had stayed the night before in Atlanta. She had told her children she was going on a walk. That was no lie. She just never finished her sentence, never offered her own offspring the astonishing, impossible particulars.

All eleven of them were grown, anyhow, and independent. They had their own children to raise and bills to pay and lawns to mow, the price of participation in the great, immobile American dream.

She was past all that. She’d send a postcard.

If she told them what she was attempting to do, she knew they’d ask
Why?
That’s a question she’d face day and night in the coming months, as word of her hike spread like fire through the valleys, as newspaper reporters learned of her mission and intercepted her along the trail. It was a question she’d playfully brush off every time they asked. And
how
they’d ask. Groucho Marx would ask. Dave Garroway would ask.
Sports Illustrated
would ask. The Associated Press would ask. The United States Congress would ask.

Why?
Because it was there, she’d say. Seemed like a good lark, she’d say.

She’d never betray the real reason. She’d never show those newspapermen and television cameras her broken teeth or busted ribs, or talk about the town that kept dark secrets, or the night she spent in a jail cell. She’d tell them she was a widow. Yes. She’d tell them she found solace in nature, away from the grit and ash of civilization. She’d tell them that her father always told her, “Pick up your feet,” and that, through rain and snow, through the valley of the shadow of death, she was following his instruction.

The Wings of Dragons: Book One of the Dragoon Saga by Josh VanBrakle
Roped (Gail McCarthy Mysteries) by Crum, Laura
Faster (Stark Ink, #3) by Dahlia West
Bodies and Sole by Hilary MacLeod
Bad Karma by Dave Zeltserman
Arielle Immortal Seduction by Lilian Roberts
Running With Argentine by William Lee Gordon
Sex and the Confession Box by M.H.O'Hara
La sombra sobre Innsmouth by H.P. Lovecraft
Not My Blood by Barbara Cleverly