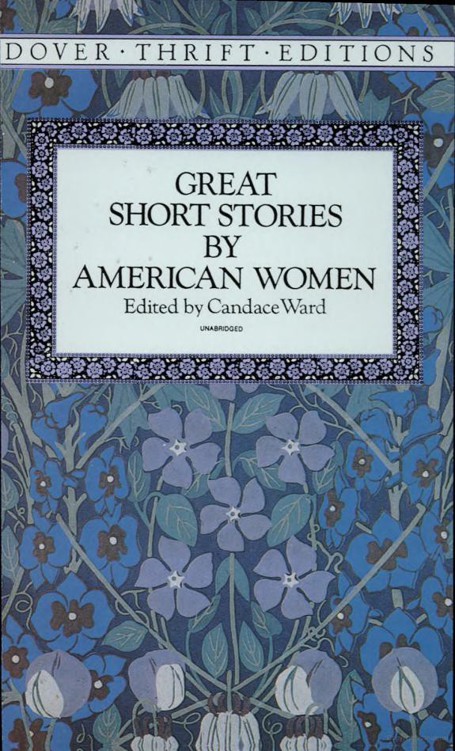 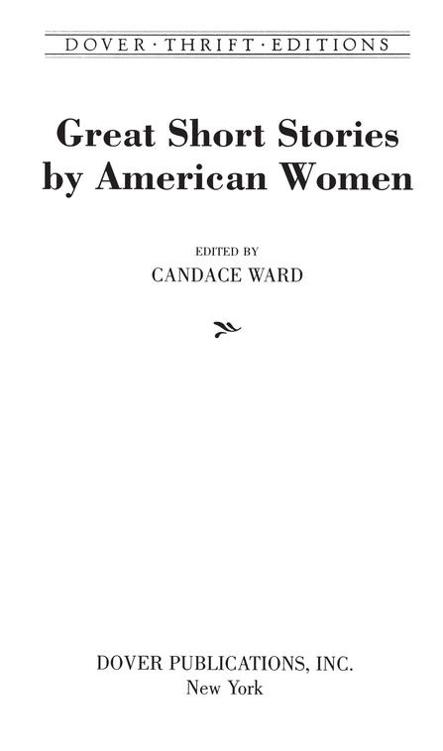 This Dover edition is a new anthology of works reprinted from standard sources. “The Storm,” by Kate Chopin, is reprinted by permission of Louisiana State University Press, from
The Complete Works of Kate Chopin
, edited by Per Seyersted, copyright © 1969 by Louisiana State University Press. A new introductory Note and introductions to the stories have been specially prepared for this edition.

TOWARD THE MID-NINETEENTH CENTURY, a new phenomenon appeared before the American public: the professional woman writer. The increasing numbers of female authors coincided with the establishment of publishing as big business and, as publishers quickly found, women’s writings — particularly sentimental fiction — sold.

The women writers in this volume, particularly those of the nineteenth century, worked both in and against this sentimental tradition. As Ann Douglas notes in
The Feminization of American Culture,
sentimental literature gave women writers a voice even as it perpetuated stereotypes and locked them (and their characters and readers) into the passive postures associated with the feminine. Thus, while Rebecca Harding Davis’ “Life in the Iron-Mills” helped establish American realism, some critics dismissed it as yet another piece of sentimental melodrama; Louisa May Alcott wrote autobiographical fiction that addressed issues such as abolition and women’s suffrage yet was heralded as America’s foremost children’s author.

The local color movement of the late nineteenth and early twentieth centuries played a paradoxical role in the reception of works by other women writers, including Sarah Orne Jewett, Kate Chopin, Mary E. Wilkins Freeman, Willa Cather, Susan Glaspell and Alice Dunbar-Nelson. While an ability to realistically depict scenes from various regional settings earned them critical praise, it also contributed to a limited perception of their work. For these writers, physical detail, dialect and local mannerisms were part of a realism that allowed them to explore the deeper themes of isolation, alienation, female sexuality and racism.

In the twentieth century, the Harlem Renaissance and the modernist movement enabled women writers to address such issues more directly. Building on the foundation of their literary foremothers, Willa Cather, Edith Wharton, Susan Glaspell, Djuna Barnes, Zora Neale Hurston and Nella Larsen gave fiction new directions. Glaspell and Barnes, particularly, availed themselves of the avant-garde possibilities of fiction that would culminate for Glaspell on the stage of the Provincetown Playhouse and for Barnes in her experimental novel
Nightwood
(1936). Hurston and Larsen drew from and incorporated the traditions of black America in their fiction, raising provocative questions about the individual’s responsibilities within and beyond her immediate community.

Since the 1970s, the study of women’s fiction has undergone a revolution. Many of the authors represented in this anthology have been rescued from obscurity by writers and critics looking beyond traditional assessments that seemed to echo Hawthorne’s dismissal of the “damned mob of scribbling women.”

REBECCA HARDING DAVIS was one of five children born to middle-class parents. Five years after her birth in Washington County, Pennsylvania, her family moved to Wheeling (at that time in Virginia). Davis received her early education at home from her mother and became an avid reader like her father. At 14, she was sent to the Washington Female Seminary in Pennsylvania and after graduating with honors in 1848, she returned to Wheeling.

In 1860, the year before the outbreak of the Civil War, Davis submitted a short story about life in an industrial mill town to the
Atlantic Monthly.
While the rest of the country was caught up in questions about slavery and states’ rights, Davis had been investigating the conditions and lives of the mill hands — concerns that were as compelling to Davis as those involved in the Civil War. Davis’ story caught the interest of James Fielding, then editor of the
Atlantic Monthly.
After anonymous publication in April 1861, it received accolades from Nathaniel Hawthorne, Emily Dickinson, Louisa May Alcott and Ralph Waldo Emerson. Despite these champions and a prolific writing career, Davis’ early fame did not last. Her first story had been long forgotten by the time of her death in 1910, and during the later years of her life she was better known as the mother of writer Richard Harding Davis. It was not until 1972, when Tillie Olsen rediscovered “Life in the Iron-Mills,” that Davis’ literary reputation was revived.

Anticipating Émile Zola’s coal-mining novel
Germinal
by 25 years, Davis’ stark realism contrasted with the sentimentalism that characterized much fiction of the period. Though later critics complained that Davis’ story relied on the kind of melodrama typical of reformist tract writings, “Life in the Iron-Mills” is a landmark of American fiction. As Olsen notes, Davis “extended the realm of fiction” by her effort to render life in the iron mills a “real thing” to her readers.

Life in the Iron-Mills

“Is this the end?
O Life, as futile, then, as frail!
What hope of answer or redress?”
1

A CLOUDY DAY: do you know what that is in a town of iron-works? The sky sank down before dawn, muddy, flat, immovable. The air is thick, clammy with the breath of crowded human beings. It stifles me. I open the window, and, looking out, can scarcely see through the rain the grocer’s shop opposite, where a crowd of drunken Irishmen are puffing Lynchburg tobacco in their pipes. I can detect the scent through all the foul smells ranging loose in the air.

The idiosyncrasy of this town is smoke. It rolls sullenly in slow folds from the great chimneys of the iron-founderies, and settles down in black, slimy pools on the muddy streets. Smoke on the wharves, smoke on the dingy boats, on the yellow river, — clinging in a coating of greasy soot to the house-front, the two faded poplars, the faces of the passers-by. The long train of mules, dragging masses of pig-iron through the narrow street, have a foul vapor hanging to their reeking sides. Here, inside, is a little broken figure of an angel pointing upward from the mantel-shelf; but even its wings are covered with smoke, clotted and black. Smoke everywhere! A dirty canary chirps desolately in a cage beside me. Its dream of green fields and sunshine is a very old dream, — almost worn out, I think.

From the back-window I can see a narrow brick-yard sloping down to the river-side, strewed with rain-butts and tubs. The river, dull and tawny-colored, (
la belle rivière!
) drags itself sluggishly along, tired of the heavy weight of boats and coal-barges. What wonder? When I was a child, I used to fancy a look of weary, dumb appeal upon the face of the negro-like river slavishly bearing its burden day after day. Something of the same idle notion comes to me to-day, when from the street-window I look on the slow stream of human life creeping past, night and morning, to the great mills. Masses of men, with dull, besotted faces bent to the ground, sharpened here and there by pain or cunning; skin and muscle and flesh begrimed with smoke and ashes; stooping all night over boiling caldrons of metal, laired by day in dens of drunkenness and infamy; breathing from infancy to death an air saturated with fog and grease and soot, vileness for soul and body. What do you make of a case like that, amateur psychologist? You call it an altogether serious thing to be alive: to these men it is a drunken jest, a joke, — horrible to angels perhaps, to them commonplace enough. My fancy about the river was an idle one: it is no type of such a life. What if it be stagnant and slimy here? It knows that beyond there waits for it odorous sunlight, — quaint old gardens, dusky with soft, green foliage of apple-trees, and flushing crimson with roses, — air, and fields, and mountains. The future of the Welsh puddler passing just now is not so pleasant. To be stowed away, after his grimy work is done, in a hole in the muddy graveyard, and after that, —
not
air, nor green fields, nor curious roses.

Can you see how foggy the day is? As I stand here, idly tapping the window-pane, and looking out through the rain at the dirty back-yard and the coal-boats below, fragments of an old story float up before me, — a story of this house into which I happened to come to-day. You may think it a tiresome story enough, as foggy as the day, sharpened by no sudden flashes of pain or pleasure. I know: only the outline of a dull life, that long since, with thousands of dull lives like its own, was vainly lived and lost: thousands of them, — massed, vile, slimy lives, like those of the torpid lizards in yonder stagnant water-butt. — Lost? There is a curious point for you to settle, my friend, who study psychology in a lazy,
dilettante
way. Stop a moment. I am going to be honest. This is what I want you to do. I want you to hide your disgust, take no heed to your clean clothes, and come right down with me, — here, into the thickest of the fog and mud and foul effluvia. I want you to hear this story. There is a secret down here, in this nightmare fog, that has lain dumb for centuries: I want to make it a real thing to you. You, Egoist, or Pantheist, or Arminian, busy in making straight paths for your feet on the hills, do not see it clearly, — this terrible question which men here have gone mad and died trying to answer. I dare not put this secret into words. I told you it was dumb. These men, going by with drunken faces, and brains full of unawakened power, do not ask it of Society or of God. Their lives ask it; their deaths ask it. There is no reply. I will tell you plainly that I have a great hope; and I bring it to you to be tested. It is this: that this terrible dumb question is its own reply; that it is not the sentence of death we think it, but, from the very extremity of its darkness, the most solemn prophecy which the world has known of the Hope to come. I dare make my meaning no clearer, but will only tell my story. It will, perhaps, seem to you as foul and dark as this thick vapor about us, and as pregnant with death; but if your eyes are free as mine are to look deeper, no perfume-tinted dawn will be so fair with promise of the day that shall surely come.