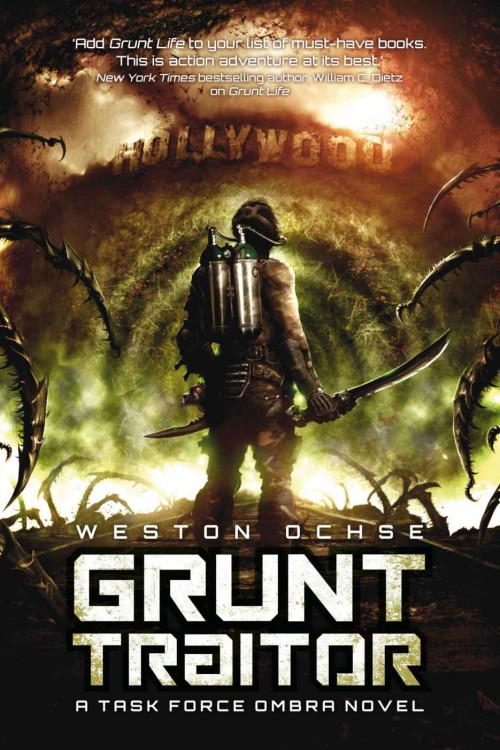 We invaded ourselves first. Make no mistake about it, had the Cray not descended from the clear blue sky, we humans—as our own invasive species—would have killed ourselves off within two hundred years. Un-regulated population, pollution, water overuse, and our utter failure to shepherd intrinsically important flora and fauna would have been our crimes. Our punishment would have been starvation, suffocation, dehydration, and overpopulation. Maybe the invasion of the Cray was the best thing that could have happened to us. Maybe the advent of the Cray was our control-alt-delete. Regardless whether you believe this, we have an undeniable clean slate. What are we going to do with it? Are we going to change, or trot out the same old governments with the same old ideas?

A hero can be anyone; even a man doing something as simple and reassuring as putting a coat around a young boy’s shoulders to let him know the world hadn’t ended.

T
HE BATTLEFIELD WAS
a disorganized collage of panic and desperation, where screams of human and alien mixed in a savage orchestration of unconstrained murder. We’d run out of ammo an hour ago and were locked in hand-to-hand combat with the multi-winged, jagged-clawed alien Cray. Orders still flew across the net, but I’d long ago ceased to follow them. I had another mission.

The jaw-clenched mantra
never leave a man behind
fueled my muscles as they powered the leg servos of my scratched, battered EXO across the dusty African earth. Airplane carcasses littered the landscape. A Cray hive split the sky like the devil’s middle finger. Both man and Cray crunched sickeningly beneath my titanium-coated Kevlar feet. I ignored that and everything else. Let the others fight the Cray. Let them do the impossible. I had to find Michelle. I had to find Thompson. My eyes scoured the horizon, but all I saw were the humans and bug-like Cray locked in battle, the exoskeletal hands and the multi-limbed claws of the creatures who’d ruined Earth, each seeking the fastest way to do the other in.

My HUD flashed a warning as my heart rate soared with panic. Where the hell were they? A black hole began to grow in my chest, pulling hope into its abysmal maw.

“Negative, Romeo Proper. We’re missing Thompson and Aquinas.” I spied an EXO trying to move and rushed towards it. The markings had worn away from a thousand Cray scratches.

I ignored the command, and reached the struggling figure. I helped it stand, then turned it. A grimy face, strong Irish features, wan smile: McKenzie.

“Thanks, pal. Thought I was done there for a second.”

He pushed away, stumbled a few feet, then was jerked in the air by a pair of Cray. I watched as he was lifted higher and higher, then released. He slammed into the earth, crumpling like a beer can, servo fluid and blood seeping from the shattered mess of metal.

Wait. I’d seen this before.

“Mason, get your ass back here.”

Olivares’s command wrenched me free of my temporary paralysis. I broke into a run, ranging back across the battlefield. What had I missed? Where could they be? Then I saw it—a black box the size of a tractor trailer, sitting in the middle of an empty part of the battlefield. I headed towards it, but felt my legs slowing.

Checking my HUD, I saw my power was down to five percent.

I fought to move as fast as I could, but without power the EXOs were concrete suits. I was close enough now that I could see inside the black box. I slowed, then finally stopped a dozen feet away, my power at zero, my hope at zero, any chance of a future with the girl I loved at zero.

Michelle. Or what had once been Michelle.

“What have they done?” I wailed.

She hung from a pod affixed to the ceiling of the box, connected by tubes through which fluids moved in a slow soupy mix, presumably keeping her alive. She faced me, naked, the rivers of pain on her arms where she’d tried to commit suicide so long ago now stark white reminders of who she’d once been. If only that girl was still around. But she’d been turned into a horrific marionette. A hundred multicolored wires and cables ran from her shaved head to a computer terminal. I could only imagine her horror. Was she aware what had happened to her? What was it she’d said?
Can you imagine? Being taken over by another entity and not being able to control your own body?

The aliens hadn’t done this to her.

My rage corrected me.

Mr. Pink had done this to her.

Her body shook and trembled. She took a great breath and raised her head, and her gaze met my own. For one brief moment, we were those same two people, reclining behind the generators, interlocked, the end of the world not even mattering, living only in each other’s eyes as we made each other laugh, cry and sing with pleasure. Then her face changed. She became sad, then angry, then enraged.

The thought slammed into my head, devouring everything else. Kill her? Kill Michelle? I could never kill her. I’d rather die.

My suit powered up and I was once again able to move.

“Then why didn’t you save her, asshole?”

I spun and saw McKenzie. “What’d you say?”

“You never saved her. She’s out there now, and half machine because of you.”

I beheld him as if he were flesh and blood, but I knew it couldn’t be. I’d seen him die. We’d honored his body. I know this because it was the morning after she and I had—

“Mason, get your ass over here.”

“Then why didn’t you save her, asshole?”

My eyes locked on another black box—five hundred meters away, according to my HUD. I pushed past the ghost of McKenzie and ran for it.

As each thought struck me, I stumbled, but I never went down.

The sound of drums began to come to me; a low heartbeat in the earth beneath my feet. At first it was on the very edge of my hearing, but gradually I began to make out the individual strokes. A drum like a drummer boy would play in a parade, like something that had been played for Washington’s Army, or General Lee’s, or General Patton’s, or Mr. Pink’s—the martial
rat-a-tat-tat
designed to bring everyone into patriotic lockstep.

“Mason, get your ass over here.”