Read Hair of the Bitch - A Twisted Suspense Thriller Online

Hair of the Bitch - A Twisted Suspense Thriller 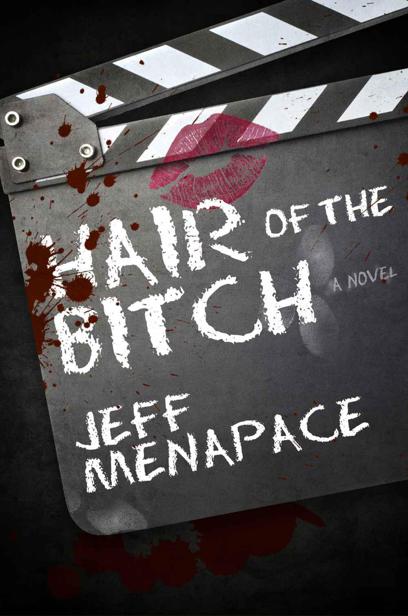 …
THAT BIT ME
Calvin Court is a massage therapist with a few secrets. He battles depression. He medicates with too much booze…and he’s got the hots for one of his clients.
Good thing is, the feeling is mutual.
Bad thing is, in order to get the girl, Calvin will have to submerge himself into an underground industry of such depravity his already dark mind won’t even know where to begin.
Maybe he’s just better off at the bar.
From Jeff Menapace, author of the acclaimed
Bad Games
trilogy, comes
Hair of the Bitch
, a dark and disturbing thriller with tongue firmly planted in cheek…until it’s ripped out.
Table of Contents

HAIR OF THE BITCH

I enter the bar—a dive—just before closing. I need to get drunk.

The place is empty save for a bartender wiping down the counter with his back to me. He calls over his shoulder: “Already did last call. Sorry about—”

He turns and my face cuts him off. I place a hundred dollar bill on the bar and slide it towards him.

“That’s yours if you lock the door and get me drunk,” I say.

The bartender looks at the hundred, then back at me. He’s about sixty, heavy, salt and pepper hair.

I pull another hundred and place it on the bar. “Door locked; me drunk. Yes or no?”

The guy takes the two bills, ducks out from behind the bar, locks the front door, draws the shades, then ducks back under the bar to face me.

“One glass and one bottle of Jim Beam.”

He gets the bottle and glass and sets them in front of me. “What happened to you, man? You look really busted-up.”

“Jesus.” He fills the glass with Beam and sets the bottle next to it.

I finish the drink in three gulps. He fills my glass again.

He shows me his palms. “No thanks—gotta clean-up after.”

I place another hundred on the bar. “Have a drink with me.”

He doesn’t take the bill immediately. “You sure you’re alright, man? There’s not going to be any trouble is there?”

I chuckle, and my whole body aches. I then finish my second Beam, pour myself a third, and say, “No sir—no trouble. Just offering you a drink.”

He slides the third bill off the bar, stuffs it quickly into his pocket as though we’ve just completed some kind of drug deal, then pours himself a small Beam with ice.

“Cheers,” I say, raising my glass.

He clinks my glass and takes a modest sip.

The whiskey is beginning to warm my belly, fuzz my head, and I’m on the verge of entering the
Fuck It
stage.

So I finish my third, pour a healthy fourth, pull the curtain and greet the audience with a bow on the infinitely trodden boards of
Fuck It
, and then start talking to this poor guy as though he wants me to.

I arrived at work and immediately checked my client list.

Yes.
She was my last one.

Sound desperate? I’m not. But when you rub naked bodies for a living, you occasionally pine for a star amongst the usual cast of extras.

And Angela Thorne was a supernova.

Let me reiterate; I am not some creepy massage therapist aching to touch beautiful women. In fact, to prove my point, I wouldn’t be so eager to massage Angela if she hadn’t been the one to start the ball rolling some six months ago.

Now, Angela was not the first client to ever make a pass at me. Massage can be a sensual art; if you’re in the field long enough, it’s only a matter of time before the more brazen clientele test their chances, some of them damn fine. And yet, I always respectfully declined. Why? I don’t know. Maybe it’s that whole thing about the fantasy being better, never giving real life a chance to do its real-life thing and mar that fantasy.

Or maybe I needed a few drinks first.

With a few (or preferably, many) drinks in me, anything was possible. I will openly admit that for some time alcohol has steered my twenty-nine-year-old life and given me the necessary lifts that no antidepressant could ever match. But alas, those lifts were always fleeting. Fleeting, and habitually accompanied by the inevitable drop below rock-bottom come morning.

Come morning when flashbacks of the previous night’s debauchery eventually came together and burned my face with shameful recall.

Come morning when the poison thumped my head, leaked nausea from my pores, and frequently jammed an invisible finger down my throat.

Come morning when the depression I didn’t think capable of getting worse somehow managed to plummet further still.

But did that stop me from doing it again?

As soon as the hangover and memories of a deeper blue faded, that siren song in a bottle that forecasted zero chance of inhibition would seduce me all over again.
And so what?
I would defiantly proclaim to the only ear willing, no,
wanting
to listen ("only ear" a prophetic pun I would regrettably exhibit).
So what?
It made me feel wonderful, if only for a short, deceitful time, and it stopped all the goddamn voices in my head.

When I say voices, I’m not talking Son of Sam shit, like I’m receiving homicidal advice from a dog. I’m talking about thoughts. A continuous loop of negativity, reminding me who I am, and what I am. Thoughts of inadequacy and self-loathing that bring my depression further south.

The paradox is that I’ve been told I give off an admirable appearance to others. I’m no stud or anything (especially not looking the way I do now), but I’m tall, reasonably fit, and on my less-miserable days I would say an above-average face stares back at me in the mirror.

I’m also a good bull-shitter. Not a con-man or anything like that, just able to convince people that my head is filled with optimism as opposed to razor shards from half-empty glasses.

The problem is that it’s hard to be “on” all the time. Being a little blue periodically is one thing, but being riddled with feelings of inadequacy 24/7 while your shell tries to portray a different story to the public without cracking? It takes a toll on you. And what does that toll end up costing?

Numbness. You become numb. Act the part long enough, and soon you forget who you are. How to feel.

And that was me. Numb. Numb and…disturbed? Is disturbed the right word? How to explain. Okay, here’s a start: I don’t like people. In fact, with the exception of a rare few, I must confess an actual disgust for the human race, and, more often than not, I have morbid and violent thoughts playing over and over in my head…

The bartender sets down his drink and takes a step back. I smile what must be a gruesome smile and assure him all is well. He doesn’t look assured. I sigh and dig for another hundred, lay it on the bar. He eyes it like it’s some kind of rare artifact. I remind him I said the word “was”—I
was
numb and disturbed. I then promise him I’m not anymore (at least not numb—disturbed, no question).

He eventually takes the money, again quick and cautious like it’s a drug deal.

I smile the gruesome smile again, notice his drink is near empty, pick up the bottle, and gesture a refill towards his glass. He accepts.

I tell him again that all is well and that I’ve had enough trouble for a zillion lifetimes, so he needn’t worry. As my story progresses he will no doubt grow cagier; the content of my tale will become so sensationally fucked-up and absurd that he will figure me for a drunk (probably, I am) who is embellishing events in his pickled mind (unfortunately, I won’t be), or just flat-out lying (again, unfortunately, I won’t be).

But this is a good thing. I don’t want this guy freaking out halfway through and calling the police or pulling a shotgun out from beneath the bar. If he thinks I’m full of shit and eventually starts to accommodate me with a
whatever you say, pal
smirk as I babble on, so much the better.

Soon he is sipping his new Beam with ice.

Crazy, huh? Thinking I’m fooling the world (and for the most part, I believe I was), letting them think that I was as stable as a horse’s home, yet after only six sessions with this woman she’s able to see right through my act, inform me that my dark side was no secret to her, that I needn’t suppress it in her company; she found it intriguing.

It was this uncanny insight and an ability to embrace the unknown from a relative unknown that had me separating Angela from every other offer I’d received in the past. There had to be something or someone out there other than alcohol capable of ripping off my numb-fitted wetsuit (or at
least
tear the fucker), and I thought Angela Thorne might be the one to accommodate me. Her beauty was irrelevant. What lay
behind
that beauty was the real prize. The thing that tickled something inside me I thought all but extinct.

The fleeting, piercing looks I’d catch her indulging in, as if she too had had her share of the exterior and now longed for more essence. The things she would say, their delivery, never actually crossing the line, but taunting it, giving me just enough to fill in the tantalizing blanks on my own.

Savage Alien: A Sci-Fi Alien Romance (Reestrian Mates Book 5) by Sue Mercury, Sue Lyndon
Seduced by a Highlander by Paula Quinn
The Golden Enemy by Alexander Key
Banana Rose by Natalie Goldberg
Vanished Without A Trace by Nava Dijkstra
Blood Orange by Drusilla Campbell
The Letter by Owens, Sandra
daynight by Megan Thomason
A Death On The Wolf by Frazier, G. M.
Jackson Stiles, Road to Redemption by Jo Richardson