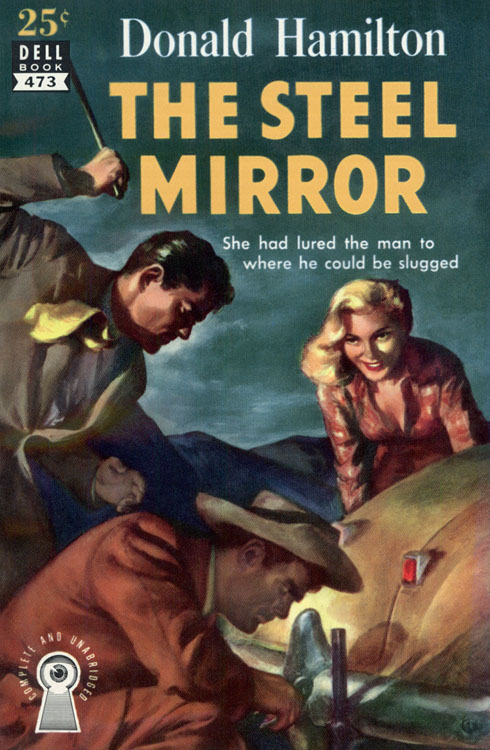 He
came back from the railway station with his tickets through the hot late
afternoon sunshine; and at the door of the Ford garage he had to step aside for
a fawn-colored Mercury convertible just driving in. He caught a glimpse of the
face of the girl behind the wheel, rather slight and fragile beneath a hat that
turned back from her forehead in a ruffled halo of pale straw. The hat had a
veil that covered but did not conceal her face, and a large stiff black bow at
the rear. The car had Illinois license plates, a Chicago sticker, and smelled
strongly of boiling alcohol. It had, apparently, been driven hard; and
something of the conjunction of the small face, the delicate veiled hat, and
the overheated car fifty miles away from home, seemed incongruous to John
Emmett; and, inside the garage, he walked very slowly toward the office door,
waiting for the girl to get out so that he could get a full look at her.

“Please,”
he heard her say to the mechanic who came up. “It keeps boiling.”

The
mechanic raised the hood. “You’ve still got your antifreeze, haven’t you, Miss?”

“Just
drive it over the pit,” the mechanic said. “I’ll clean it out for you.”

The
car jerked forward, backed, went forward again; the mechanic beckoning, waving,
finally halting it with his hand. “Better let me do it, Miss,” he said, coming
forward.

The
girl laughed uncertainly. “I guess you’d better. I can’t seem to make it fit.”

Then
she got out and brushed at the rear of her pale gabardine suit, and stood
watching the mechanic put the car into place with two expert movements; the
girl standing there slender and rather small in the dusk of the grimy garage,
in the fragile hat and the expensive light suit. She was wearing white gloves
and carrying a large rectangular black purse on a strap over her arm. The
stockings on her fine legs were obviously nylon, and she was wearing dark pumps
with moderately high heels.

All
that cost and careful preparation, John Emmett thought, frowning, as for a
cocktail party; standing a little stiff and cramped, a little crushed in the
rear, with perspiration on her forehead and upper lip, beside an overheated car
in a dirty garage in Jepson, Illinois. It was really none of his business, and
he started to turn away.

“Please,”
the girl asked the mechanic, “have you any roadmaps?”

“See
the man in the office, Miss.”

Emmett
held the door open for her as she came up, and followed her into the office.

“I’d
like one of Illinois and one of Iowa,” she said, “and if you’ve got a big one
that shows…”

Emmett
grinned at her. “The guy over there,” he said.

She
flushed a little, seeing the camera, like a badge proclaiming him a tourist,
slung over his shoulder. “Oh, I’m sorry, I thought…”

The
man in the corner pushed a map across the counter. “All we’ve got is Illinois,”
he said.

“Try
the Standard station up the street.”

Emmett
had gone behind the counter where his suitcases stood, with his fishing-rod
case, between the shelves of automobile accessories. He hesitated a moment and
raised his head.

The
girl turned, her gloved hand on the map on the counter. “Thank you,” she said
politely, “thank you, but I can…”

“I
won’t need them,” he said, and grinned wryly. “It’s not really my car any more.
It kind of disintegrated about ten miles east of here. I just sold what was
left of it.” As the girl looked at him he was suddenly glad that he had
changed, in preparation for catching the eight o’clock train, from the dirty
slacks and sports shirt in which he had been driving. He could see himself in
the spotted plate-glass windows, looking not particularly young or handsome or
athletic, or even, he thought, particularly intelligent, but quite respectable.
“I’ve got the whole works,” he said. “Clear to the coast. You’re welcome to
them. They’re no good to me without a car.”

He
shrugged his shoulders. As they walked back into the garage he asked, “How far
are you going?”

She
laughed, glancing at him, and said, “I don’t think so. I’m sorry.”

He
opened the door of the ancient Ford with the D.C. plates that had been hauled
away into the rear of the garage, and took the maps from the glove compartment.

“Thank
you very much,” the girl said, receiving them. “I’m sorry about your car.”

He
knew that she was really apologizing for the fact that she could not quite see
her way clear to inviting a strange young man to ride with her, but he kicked
the front tire of the Ford ruefully.

“And
I just put new rubber on the thing,” he said. “Four new tires.”

“Oh,
yes,” he said bitterly. “For a few hundred they’ll put in a new motor which
might get here three weeks from now, overhaul the transmission and rear end,
and for another fifty-something, they’ll beat the dents out of the fenders and
throw in a paint job and simonize. By the time they got through I’d have to
grab a plane to get to Bakersfield in time.” He grimaced. “I was going to spend
a month seeing the country between jobs, but I guess I’ll just have to try a
dude ranch I know, instead.”

As
he talked, he found himself trying to introduce himself and at the same time
make the girl feel a little sorry for the poor man whose vacation plans had
broken down. Yet he was aware that she could not help him: he could hardly expect
her to chauffeur him through the Rocky Mountains, and he was quite able to pay
the train fare to wherever he wanted to go. So that, in the last analysis, he
was not really talking about transportation at all, but about the two of them
and the fact that he was curious about her and wanted to find out what brought
her, dressed as she was, into this little town looking for roadmaps of Iowa and
points west. He was, in other words, quite simply trying to pick her up. The
realization startled him.

“Well,”
he said shortly, “I think you’ll find all you need there. I’d better get my
gear over to the railway station before somebody walks off with it.”

“Is
there any clean place in town to eat?”

“I
really wouldn’t know,” he said, and her face contracted a little at his
brusqueness. Suddenly he understood that she was asking him to ask her to eat
with him so that they could talk this matter over further; it was still not
quite closed. She was actually considering it. He found himself a little
startled. “I’m sorry,” he said. “I’ve never been here before. Suppose I ask.”

He
came back to the office door after a moment, shoving the camera case back with
his elbow.

“He
says the truck drivers eat at the Elite, and the flossy place is called Parsons’.”
He did not step across the sill, making his report through the open door, so
that she would not think he was assuming he had permission to accompany her.

“Well,”
she said uncertainly, “what would you—?”

“If
you’re going alone,” he said carefully, “I’d suggest Parsons’; but if you don’t
mind my company, the Elite probably has better food cheaper.”

She
smiled very quickly. “But you don’t think I’d be safe there, alone?” There was
a little mischief in her voice.

He
saw her glance down at her suit, and from the way she flushed he knew that she
was aware of being overdressed for the Lincoln Highway. “Well,” she said, “if
you’re really…”

He
was aware of her beside him as they came out into the sunlight, but he did not
dare look at her directly for fear she would misinterpret his glance as either
familiarity or curiosity.

“I
don’t know your name,” her voice said, as if she were a little surprised at
finding herself walking down a hot sidewalk in a strange town in Illinois
beside a man whose name she did not know.

“Did
you work in Washington?”

They
turned into the Elite restaurant which had three men parked with their rear
ends thrust out in identical postures from the battered swivel stools by the counter;
a table held four more talking deliberately over their coffee. A middle-aged
couple by the window looked a little out of place. The men looked up, not all
at once but taking turns at it, as Emmett and the girl came in; those with
their backs turned, making the movement casual, as if they had turned to spit
on the floor behind them and had just happened to notice the girl. Their faces
made no comment, and after the last of them had had his look you could feel
them carefully taking up where they had left off, eating and talking, but there
was a sudden sense of male awareness throughout the room.

The
girl selected a table and sat down, started to remove her gloves and stopped,
looking at them, and grimaced. They were a little soiled. She stripped them and
turned back her veil, and he saw her face for the first time without
interference. It had wide, arched eyebrows, a small, straight nose, and a firm,
rather pointed, chin. He watched her as she felt of the earrings like small
gold blossoms with pale blue stone centers, which matched the spray of three
such blossoms on a gold stalk that was pinned to her lapel. She glanced up,
catching him watching her; and, perhaps to help him cover his confusion, rubbed
her eyelids with the tips of her fingers.

“Remind
me to buy some aspirin on the way back,” she said.

She
nodded. “It was kind of glary.”

“Only
from
Chicago
,” she said. “But I didn’t have any
sunglasses. I’d better get some of those, too.” Then, quickly, before he could
ask the logical next question, where she was going, she said, “But you’re
unemployed at the moment.”

A Passion Redeemed by Julie Lessman
Simple Man by Michaels, Lydia
Love In The Time Of Apps by Jay Begler
Annihilate Me (Vol. 1) (The Annihilate Me Series) by Ross, Christina
Night of a Thousand Stars by Deanna Raybourn
Noche by Carmine Carbone
Torn (The Handfasting) by St. John, Becca
Between by Tefft, Cyndi
Victorious by M.S. Force
The Black Book by Orhan Pamuk