Read Hand for a Hand Online

Hand for a Hand 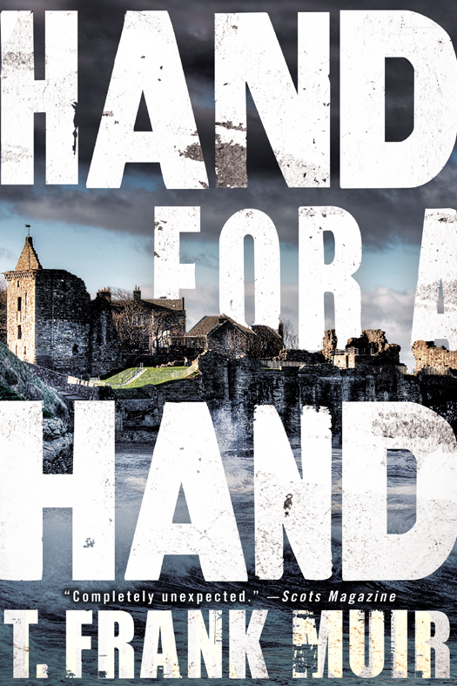 To all women betrayed by those they trusted

Three lawyers’ tongues, turn’d inside out
,

—A couplet from Robert Burns’ original manuscript of his epic poem
Tam O’Shanter
, which he was persuaded to leave out

T
AM
D
UNN WATCHED
the golf ball take a hard kick left and slip into the infamous Road Hole Bunker, a sandy-bottomed pothole that fronted the seventeenth green.

Bud Amherst, one of an American four-ball that teed off at 7:00 that morning, first on the ballot, threw his five-iron to the ground. “Goddammit,” he shouted, turning to Tam. “Course’s nuthin but sand traps. Why didn’t you tell me it was there?”

The way Bud played golf it would have made no difference if Tam had first led him by the hand and stood him in the bunker. But Tam the caddy, always hopeful of an American-sized tip, bit his tongue. “My mistake, sir.”

Close to the green, the bunker looked more like a hole in the ground, its face a vertical wall of divot bricks that even the pros struggled to overcome.

“I know that, goddammit. Which way’s it gonna break?”

“About three feet from the left.”

Tam kept tight-lipped as Bud took a few clumsy practice swings. The only way Bud was going to get the ball onto that green, he thought, was to lift it and place it. Bud turned
to the bunker, prepared to step down into it, then stumbled backwards.

Bud slumped to his knees. The sand-iron slipped from his grip.

One of the Americans, the tall one called JD, trotted across the green. “Hey, Bud, you okay?”

Bud stretched an arm out and flapped it at the bunker.

Tam stepped to its lip and stared down at the hand, at skin as white as porcelain, bony fingers clawed like talons. Even from where he stood he could tell it was a woman’s hand, a fine hand, he thought, except the wrist looked butchered and bloodied, like a cut of meat hacked, not sliced, the bone glistening like a white disc smeared with blood.

And all of Tam’s hopes for an American-sized tip evaporated in the cold Scottish air.

“Seventeenth green on the Old Course. Next to the Jigger.”

Gilchrist drew his Mercedes SLK Roadster to the side of the road and pressed his mobile to his ear. It had been a while since he had heard DS Nancy Wilson as breathless. Not since they had run the length of the West Sands chasing what’s-his-name. Blake. That was it. Murray Blake. Rapist, serial shagger, petty thief. How some people thought they could get away with it never failed to amaze him.

“Severed hand in a bunker. Victim’s in her early twenties, late teens—”

Gilchrist tugged the steering wheel, felt the tail-end throw out as the Merc spun in a tight circle. “Any rings?” he asked. “Moles? Scars?”

“Nothing obvious. Fingernails are short. Not varnished. Skin’s a bit rough.”

“As in manual labour?”

“As in someone who doesn’t use hand lotion.”

“Or couldn’t afford to.”

“It couldn’t have come from the mortuary or been cut from—?”

“Not a chance, Andy. She’s been murdered.”

“Get on to the University. Find out if any students have gone missing, called in sick, not turned up, whatever.”

“Has Mackie seen it yet?”

“Just arrived. Along with the SOCOs.”

“Make sure they take fingerprints and run them through the AFR system.”

If the victim had no criminal record, the Automatic Fingerprint Registration System would draw a blank. But it was worth a shot. “Estimated time of.…” He wanted to say,
death
, then chose, “… amputation?”

“How about the other bunkers?”

“We’ve got a team walking the course. Nothing back from them yet.”

“Any thoughts?” he asked.

“Nothing definite. The sand was smooth, which might suggest the hand was placed in the bunker.”

“As opposed to thrown in?”

“Maybe.” Gilchrist was again struck by the undercurrent of excitement in Nance’s voice. He thought back to her statement—
Not a chance. She’s been murdered
—and knew from the firmness of her response that there had to be more. “What’re you not telling me, Nance?”

“She, I mean … the hand was holding a note. Addressed to you.”

A frisson of ice touched his neck. He booted the Merc to seventy. “What’s it say?”

Murder?
“So whoever severed the hand is sending me a message.”

“How was the note addressed?”

“On the envelope. Your name. DCI Andrew Gilchrist.”

Andrew
. Not Andy. Was that significant? “Typed? Or hand-printed?”

Something tugged at his mind. “I thought you said
note
.”

“Someone opened the envelope?”

Although the envelope was addressed to him, found in the clutches of a severed hand, it niggled him that it had been opened and read. “Why use an envelope to put a note inside?” he asked. “Why not just the note? Why the envelope,
then
the note?”

“Greaves wants to assign you as SIO.”

Senior Investigating Officer
. Gilchrist laughed. “I would have thought a severed hand clutching a note addressed to me would make it obvious that I should be SIO.”

Hearing his own words made something slump to the pit of his stomach. He had always dreaded this moment, the day when he would be targeted by some sick pervert. And the pervert who severed the hand had asked for Gilchrist to be involved. No, more than that,
wanted
Gilchrist to be involved. But why? Was the woman someone he knew? At that thought, a surge of panic jolted his system.

“Left hand. Skin’s flawless, except for the fingernails. They’re cracked.”

Relief powered through him. It was every policeman’s fear that their family would be the victim of revenge, their lives threatened by some criminal bent on getting even for some long-forgotten score. The thought that the hand could have been his daughter’s had hit him with the force of a kick to the gut. Maureen lived seventy miles away in Glasgow, but bit her nails and picked the skin. Despite the gruesome task ahead he almost smiled.

“Fingernails look as if they’ve been trimmed,” Nance went on. “But the cracks still show.”

Gilchrist was fast approaching traffic. He eased his foot off the pedal. “I’ll be with you in ten minutes,” he said, and hung up.

Dear God. Now this. A young woman’s hand. What had happened? Had her hand been severed in the course of torture? Was she still alive? No, he thought. She was already dead. But where was the rest of the body?

And why a hand? Why leave it where it was sure to be found?

Simple. Because the perpetrator of this crime
wanted
the hand to be found.

Hence the note. For him.

But who was this young woman?

Being forty-seven, Gilchrist did not know too many
young
women. His daughter, Maureen, of course. But she had never invited him to meet her flatmates or friends. Not that she hid them from him, but she lived away from home, ever since Gail left him. And then there was Chloe, his son’s girlfriend. And that was about it as far as
young
women were concerned.

Still, he needed to put his mind at rest.

He located Maureen’s number and felt a flush of irritation as her answering machine cut in. Leaving messages seemed to be his way of communicating with her these days. He kept this one
short, ordered her to give him a call, then he called Jack. It was a wild thought. But better to be sure.

Jack coughed, a harsh sound that seemed to come from his chest, which made Gilchrist think he had started smoking again. “And to what do I owe this pleasure?”

“Isn’t a father allowed to call his son and ask how he is?”

“Come on, Andy. First thing in the morning?”

Gilchrist let out a laugh. Jack was a freelance artist whose creative side seemed to flourish only on the other side of midnight
and
sobriety. Midday could be an early start.

Gilchrist thought Jack’s answer was too quick. “I’d like to talk to her,” he said.

Because we’ve found a severed hand and I’m scared to death it might be Chloe’s
.

“Sure. I’ll get her to call when she gets back.”

Gilchrist pressed the mobile to his ear. Jack had a cavalier attitude about most things, but his voice sounded lifeless. “Everything all right?” he tried.

“And she’s stomped off to cool down.”

“Good.” And Gilchrist meant it. Chloe was the best thing that had happened to Jack. An artist too, she had a calming effect on his wild son, even assuring him that Jack no longer smoked cigarettes or any other substances. He almost hated to say it, but he trusted Chloe more than he did his own son. He held on, expecting Jack to continue, but it seemed as if the topic of Chloe was over.