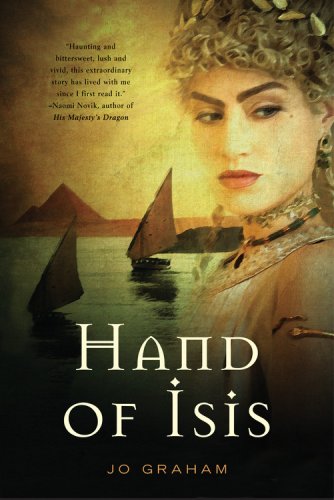 Orbit is an imprint of Hachette Book Group, Inc. The Orbit name and logo are trademarks of Little, Brown Book Group Limited.

A City by the Sea

In the House of Pharaoh

The Hands of Isis

The Mirror of Isis

Lord of The Black Land

The Gates of Amenti

Coming Forth By Day

The Wind of The World

He Lives And Reigns

THe Ides of March

The Progress of Dionysos

In The City of Isis

The Parting of The Waters

Lords of the East

O
nce, in a palace by the sea, there were three sisters born in the same year.

The eldest was born in the season of planting, when the waters of the Nile had receded once more and the land lay rich and fertile, warm and muddy, and waiting for the sun to quicken everything to life. She was born in one of the small rooms behind the Court of Birds, and her mother was a servingwoman who cooked and cleaned, but who one day had caught Ptolemy Auletes’ eye. Her skin was honey, her eyes dark as the rich floodwaters. Her name was Iras.

The second sister was born under the clear stars of winter, while the land greened and grain ripened in the fields, when fig and peach trees nodded laden in the starry night. She was born in a great bedchamber with wide windows open to the sea, and five Greek physicians in attendance, for she was the daughter of Ptolemy Auletes’ queen, and her name was Cleopatra.

The youngest sister was born as the earth died, as the stubble of the harvest withered in the fields beneath the scorching sun. She was born beside the fountain in the Court of Birds, because her mother was a blond slave girl from Thrace, and that was where her pains took her. Water fell from the sky and misted her upturned face. Her hair was the color of tarnished bronze, and her eyes were blue as the endless Egyptian sky. Her name was Charmian.

Once, in a palace by the sea, there were three sisters. All of the stories begin so.

The city of Alexandria is teacher, apex of Panhellenism

And in all fields of knowledge and all the arts the wisest.

—
The Glory of the Ptolemies,

In twilight I approached the doors, and in twilight they stood open for me. I was not surprised. I knew that I was dead.

I walked through the doors and through the hall beyond, pillars thick as the tallest trees carved round with symbols in red and gold, with stories of those who had walked this way before. Above the high capitals ornamented like lotus blossoms was not the star-painted ceiling one might expect, but the wide expanse of the night sky, blue-black and deep as eternity. I stood in the Halls of Amenti, the Uttermost West, and the sun did not come here. I walked in starlight.

Light glimmered at the end of the long hall. I walked among the pillars, my feet soundless on the stone floor. Shades make no noise, even in their sorrowing.

At last I came to the end of the hall, where the veil stretched between two pillars, and before it on a dais sat the thrones.

Serapis wore a robe of white. His gray hair was cut short and His eyes were as dark as the sky, an old man but hale, with a black hound sitting alert at His feet. Beside Him, Isis glimmered like the moon. Her gown was white as well, but Her dark hair was covered by a black veil, and beneath it Her face was pale and beautiful.

“Welcome to the Halls of Amenti, daughter,” She said.

I knelt. “Gracious Ones,” I said. To the side I saw the scales, Ma’at with a feather in Her hand, the golden balance waiting.

“You know what must be,” He said, seeing where my gaze went.

I nodded, and moistened my lips. My heart should be measured against a feather to see whether the deeds of my life condemned or released me. I knew the formulas. Every child learns them. “Hear, Gracious Ones, how I have not offended. I have not done wrong. I have not robbed. I have not slain men. I have not spoken lies. I have not defrauded the gods. . . .”

Isis raised Her hand, and it seemed for a moment that there was amusement in Her voice. “Well We can believe that you have memorized all of the words, Charmian. But when you stand before the Thrones of Amenti, it is not enough to have learned the words that should rest by your side on a sacred scroll. Your heart must be weighed on its own merits. You must be judged by your own deeds.”

I looked at Ma’at, where She stood beside the scales with justice in Her hands, and I knew how heavy my heart must be. “Then condemn me now, Gracious Lady. I shall offer no defense.” I felt the tears pricking behind my eyes, and all of the sorrow of these last days came rushing back. “I have no defense to offer, and readily accept whatever punishment you shall name.”

“It is not that simple,” Serapis said. “We are just, and do not condemn out of hand.”

“Surely if the prisoner will offer no defense, the judge must convict,” I said, and heard myself choke. Whatever should happen would be no greater than this pain that already was.

Her voice was calm. “In a human court, perhaps. But We are in no hurry. We shall wait for your testimony as long as it takes.”

I bent my head and the tears overflowed my eyes. “I can give no defense, for I have failed in my charge. I have failed, and through my weakness have destroyed all those I love. I can make no excuses, now or ever.”

Serapis put His hands together, like a philosopher in disputation. “I think perhaps you overestimate your own culpability. But We shall see, when your testimony is complete.”

“I cannot do that, Gracious Lord,” I said, and I could not even see His face through my tears, my hands pressed against the stone floor. “I beg You to condemn me. There is no punishment You could devise worse than what already is.”

I pressed my forehead to the floor, my hands in fists.

Above my head, I heard Him speak. “And yet while you are here, time runs true. Even the gods may not stop time. In the world, days and nights are passing.”

“And what is that to me?” I asked bitterly. “There are none I love who still walk beneath the sun and moon.”

“I do not think that is true,” Isis said quietly. “Are there not those you love who have not yet crossed Death’s threshold? In the world that is, time is passing for them, and things happen that cannot be amended.”

“And what may I amend, dead as I am?” I asked. “There is nothing I can do for them, and You cannot persuade me that I am not really dead.”

“No,” She said. “You are dead. Even now your mummy lies in your tomb, preserved by the embalmer’s art. Your life as Charmian has ended, and never again in that mask shall you walk under the sun. And yet your spirit endures.”

“I should rather that it did not,” I said. “When I have lost all, and when I can do nothing for those I have failed.”

“You do not have the choice of that,” Serapis said. I looked up at Him, and there was something in His face both familiar and serene, though a line of worry creased between His brows. “Your spirit is old, and you have endured much worse. But time runs true beneath the sun, and ships ply the seas homeward bound under the stars of heaven.”

“Even now they sail,” Serapis said. “Horus and his brother, and the moon their sister. Even now, they are bound for Rome. And you sit here lamenting.”

I knelt upon my knees, swaying before Their thrones. “Are You saying there is something I may yet do? Gracious Ones, if there is anything I may do at any cost . . .”

“There may be,” She said. “But firstly your heart must be judged. You have come before the Thrones of Amenti, and what must be, must be. Speak true, and recall to yourself all that you have been, that We might test the weight of it.”

“Then I shall begin, Gracious Lady,” I said. And I stood up.

Sin noticias de Gurb by Eduardo Mendoza
My Life With The Movie Star by Hoffmann, Meaghan
Banquo's Son (A Crown of Blood and Honour Book 1) by T. K. Roxborogh
Vengeance by Shana Figueroa
Let There Be Suspects by Emilie Richards
The Small Miracle by Paul Gallico
Chase the Dawn by Jane Feather
If I Never See You Again by Niamh O'Connor
A Sorta Fairytale by Emily McKee
Across the Counter by Mary Burchell