Read Hard Sell: The Evolution of a Viagra Salesman Online

Hard Sell: The Evolution of a Viagra Salesman 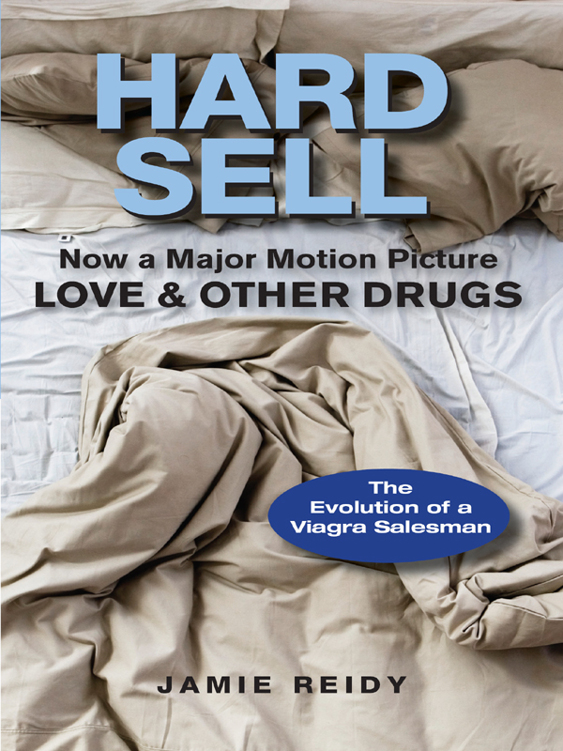 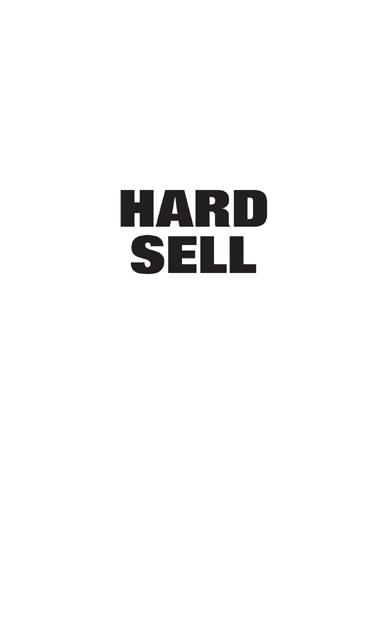 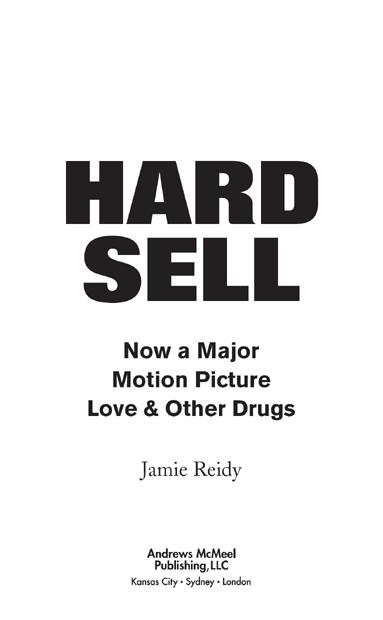 Hard Sell
copyright © 2005, 2010 by Jamie Reidy. All rights reserved. No part of this book may be used or reproduced in any manner whatsoever without written permission except in the case of reprints in the context of reviews.

The Library of Congress has cataloged the hardcover edition with the title
Hard Sell
as follows:

The names of many individuals in this narrative have been changed in order to protect their privacy.

Viagra is a registered trademark of Pfizer Inc. which does not sponsor, nor is it affiliated with Andrews McMeel Universal.

For my parents, Rich and Loretta
They gave me my sense of humor
and the confidence to believe that
people want to hear my stories.
You can blame them.

We couldn’t all be cowboys,
So some of us are clowns

I’
D BE NOWHERE
without the thick skins of my brother, Patrick, and sister, Anne-Marie. Thanks for not smothering me in my sleep.

In the summer of 1990, Joe Mileti wrote me a letter at basic training saying, “You’ll be a fine writer when your day comes, Jamie.” He probably doesn’t even remember that, but I never forgot it. Thanks for being the first, Papa Joe.

Egomaniacs sometimes need tough love to see the truth. To that point, I thank Shelley (Guilbault) Curry for giving me a well-deserved kick in the ass.

Thanks to screenwriter Ted Griffin for talking me out of another title and into
Hard Sell
.

After shamelessly taking advantage of their willingness to read this book multiple times, I am impossibly indebted to Maureen Lynch, Carol Quigley, and Steve Egan for their encouragement, keen eyes, and quick turnaround time. Hopefully all of you will still work for beer the next time around.

Thanks to Adam Duritz, for allowing me to use the Counting Crows quote that opens the book, and Nicole Duritz for talking her big brother into it.

Still dizzy from reading my publishing contract, I must thank Patrick Sweeney, a great attorney and an even better friend.

I got published without an agent. Really. I owe that to Ed Trifone, whose insistence on using his connections to get this book to Andrews McMeel made this “acknowledgments” section necessary. Eddie, we are ND.

I’m eternally grateful to my editor, Chris Schillig, who saw something in an unsolicited manuscript someone dropped on her desk. Thanks for believing in me, Chris, and for making me look better than I really am.

Without my number one fan’s unflagging optimism and ceaseless editing efforts, I never could have reached this point. Mary Harder, M.D., part of this is yours.

Lastly, to the men and women I worked with at Pfizer (especially the Vipers, El Ninos, and Bricklayers), I thank you for the laughs, the lessons, and the stories. Good selling.

“T
AKE THE FIRST PILL ONE HOUR BEFORE SEX!”
The urologist’s voice boomed from down the hall, loudly enough that I—along with the twenty-five men jamming the waiting room—could hear. I froze, mortified by the realization: That’s how Viagra is dosed!

At that point in my three-year pharmaceutical sales career, I had witnessed numerous violations of patient confidentiality. In spite of their best efforts to avoid doing so, doctors often dispensed advice in front of other patients. When discussing bronchitis or allergies, it wasn’t that big a deal, but never before had I heard a physician inform everyone within earshot that, basically, “This guy can’t get it up!” Viagra was really making people crazy.

And I should have seen the insanity coming. A phone call from my father two months earlier had provided all the evidence necessary.

Growing up in my parents’ home, conversations about sex were as common as visits from the Pope and about as comfortable. My dad had so looked forward to our “birds and bees” talk that my mom finally had to step in and explain things to me. Consequently, I was caught off guard when, during a phone conversation in mid-March 1998, just days before Viagra received FDA approval, he jokingly referred to having s-e-x.

In January of that year, I had been promoted, along with 119 other sales reps, into Pfizer’s new Urology Division, one created specifically to sell Viagra to the specialists who most often treated erectile dysfunction (ED). We had used the first two months of the year to begin establishing rapport with our new customers—it might be awkward to meet a physician for the first time and immediately begin discussing blood flow to the penis—and to sell the other three products in our division’s portfolio. The urologists didn’t want to hear about our drugs to treat infected prostates or help men pee less often at night, though. All they wanted to know was when the wonder pill would be on the market. Referring to this, I told my father I was looking forward to the Viagra launch meeting.

“I just know Pfizer stock is going to explode,” he said optimistically.
Sure, Dad
. I nodded at the phone the way all sons do at some point when talking with their fathers. If I’d have hung up right then, we might never have had “the conversation.” After a pause, Dad continued with the strange, forced chuckle I would become quite familiar with over the next few months. “Well, ha-ha, Jamie, when you get some samples, how about you send the old man some? Ha-ha, ha-ha.”

My father and I had had only one successful sex talk ever. On the night of my tenth Christmas, he and I sat downstairs after the last guest had departed. Over the humming of the dishwasher, we could hear my mother moving between rooms, clearing innumerable plates
and glasses. My dad gazed around the room, nodding contentedly, his eyes glassy with Christmas cheer and a half-dozen whiskey sours. Just us guys enjoying a postholiday moment; I’d never get a better chance to bring up an issue that had been bothering me for a few days. With an exaggerated cough, I interrupted the silence. Swirling the ice in his drink, he looked at me with raised eyebrows. Emboldened, I asked him what would happen if a man’s penis got stuck in a woman’s vagina while they were having sex. (To a ten-year-old boy, one could not imagine finding oneself in a worse predicament.) He replied, without hesitation, “You should be so lucky.” Alas, the rest of our sex talks were neither memorable nor comfortable experiences for either one of us. Consequently, we silently agreed not to have them anymore.

Starlight (The Dragonian Series Book 5) by Adrienne Woods
Blood Loss by Alex Barclay
Hard Case Crime: Passport To Peril by Parker, Robert B.
Cruel as the Grave by James, Dean
Dance by Kostova, Teodora
Black Moon Sing (The Turquoise Path Book 1) by L. M. Hawke
Consequence by Eric Fair
Heart of Texas Volume One by Debbie Macomber
Terror in East Lansing: The Tale of MSU Serial Killer Donald Miller by R. Barri Flowers
What's Yours is Mine by Quinn, Talia