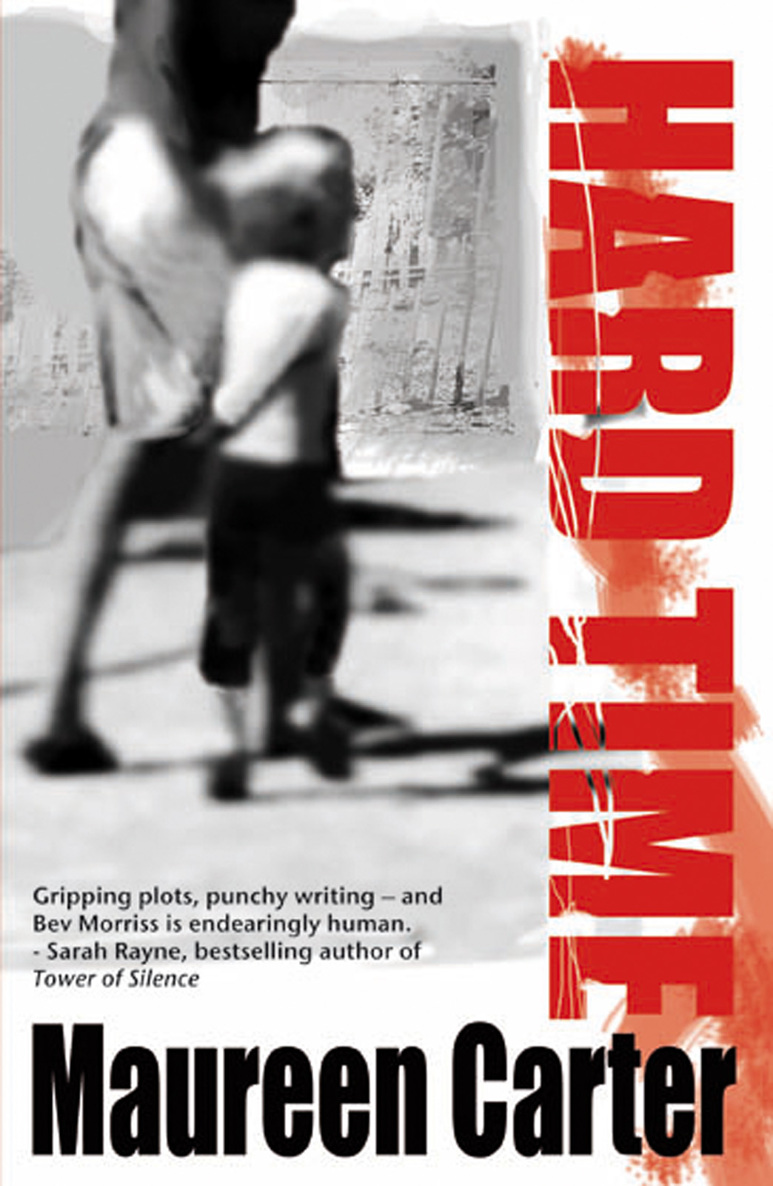 Many writers would sell their first born for the ability to create such a distinctive voice in a main character.

... it is good to see a publisher investing in fresh work that, although definitely contemporary in mood and content, falls four-square within the genre’s
traditions.

Crème de la Crime... so far have not put a foot wrong.

The moral right of Maureen Carter to be identified as the author of this work has been asserted by her in accordance with the Copyright, Designs and Patents Act, 1988.

All rights reserved. No part of this publication may be reproduced or transmitted in any form by any means, electronic or mechanical, including photocopying, recording or any
information storage and retrieval system, without prior permission in writing from the publisher nor be otherwise circulated in any form of binding or cover other than that in which it is
published.

Maureen Carter has worked extensively in the media. She lives in Birmingham with her husband and daughter. Visit her website:

Huge thanks as ever go to Douglas Hill, whose editorial advice and acuity are beyond measure.
Hard Time
would not be the book it is without his expertise,
enthusiasm and support.

I am again enormously indebted to Lynne Patrick for her faith and focus, and her inspirational team at Crème de la Crime.

For his valuable insight from both police and press points of view, I thank Richard Lakin.

And for helping me see through Bev’s eyes, massive thanks to my favourite detective sergeant in the Midlands.

Writing would be a lonelier place without the support of some special people. For ‘being there’ even when they’re miles away, my love and affection go to: Peter Shannon,
Veronique Shannon, Corby and Stephen Young, Anne Hamilton, Frances Lally, Jane Howell, Henrietta Lockhart, Suzanne Lee, Paula and Charles Morris and Helen and Alan Mackay.

Finally, my thanks to readers everywhere – as always, this is for you.

It was snowing when she dumped the baby. She laid the newborn on the ice-cold floor, winced as the pitted concrete dug into her knees. The blanket had loosened slightly
during the short walk. She pulled it tighter, then drew the hood of the shawl over the baby’s head. Delicate mauve eyelids fluttered in protest, though the child didn’t wake.

The young mother studied the tiny face, perfect in every detail. It was an image that would stay with her forever, returning unbidden over the years to torture her with feelings of guilt and
shame and sorrow. Little more than a child herself, she believed the baby would be better off without her. It didn’t make the decision easy.

Outside the cubicle, she paused, leaned against the door for support. What harm was there in one last look? She shook her head, nails drawing blood as they dug into her freezing
palms.

Seconds later, she emerged from the breezeblock building, raised the fur-edged hood of a grubby parka and glanced round. She’d never been to Stafford before, probably never would again.
It was just a name on a map, a town with a railway station where she could break the journey south. No planning, no great design, no inkling of what the future held for herself – or the
baby.

She made her way across the Square. It was scattered now in icing-sugar snow and lay in darkness save for festive lights slung like gaudy necklaces between lampposts. Others nestled in the
branches of a huge Christmas tree. Santa Claus and snowmen, reindeer and robins: the scene seemed to mock the young mother’s black despair.

She found a place to watch from the shadows. Her pale face glistened with tears as she waited and watched. Waited for a stranger to take her baby.

A newborn baby abandoned in public toilets in Stafford town centre is lucky to be alive, according to Staffordshire police.

Sergeant Neil Jackson told the
Chronicle
: “It was the coldest December night in a generation. It’s a miracle the baby didn’t freeze to
death.”

Sergeant Jackson said a passer-by who found the little girl undoubtedly saved her life. Bridget Mackay, from Lark Rise in Stafford, was walking through Market
Square when she heard cries from the ladies’ toilet.

Mrs Mackay alerted the emergency services, then kept the baby warm until medical help arrived. “I only did what anyone would do,” she said.

The baby was rushed by ambulance to the Princess Margaret hospital where she is now recovering from her ordeal. Miss Susan Green, a nurse in the children’s
ward, said: “She’s a poppet. We’ve been calling her Holly because it’s so close to Christmas. Being reunited with her mum would be the best present ever.”

Police want to talk to anyone who was in or near Market Square last night and who may have noticed anything suspicious. They particularly want to trace a young
woman who was seen leaving the toilets at about 11 pm. A special hot-line number has been set up and all calls will be treated in strictest confidence.

The police have also issued an appeal to the baby’s mother to come forward. “The woman has nothing to fear from us,” Sergeant Jackson said.
“She’s the mother of a beautiful little girl. We just want the story to have a happy ending.”

A man in a trench coat walked his dog down a wide pavement still slick with rain. It was past midnight, the street dark and otherwise deserted. Tall with stooped shoulders, the
man carried a heavy torch. The young black labrador pranced at his side, pausing to investigate the damp bark of a dying oak tree. Through the fretwork of gnarled branches, indigo clouds skittered
across a sallow moon.

Robbie Crawford observed his dog with affection; a lazy smile softened the hard angles of his lined face. The former police officer was in no hurry. He knew sleep would be a long time coming;
had no idea his life was almost over.

He walked at night to combat insomnia worsened by early retirement. He’d held detective chief superintendent rank before quitting the West Midlands force two months earlier, at the age of
fifty-three. Since then he’d learned more about his home patch, wandering around it, than in his previous twelve years’ residence.

Wake Green was solid, respectable, not plagued by street crime. Thieves were more likely to target its large semidetached houses, half-timbered properties full of rich pickings. Crawford knew
the location of every burglar alarm, which systems were linked to the police, which buildings were soft targets. He gave a wry smile. Luckily, he was one of the good guys.

As a few spots of rain began to fall he lifted his collar, tugged gently at Jasper’s lead. If the heavens opened again, the walk would have to be cut short. He hoped it wouldn’t come
to that. The nightly routine, the regular exercise, helped him sleep – eventually. Like most officers, serving or not, Crawford suffered flashbacks, unsettling images he thought he’d
learned to live with. Nowadays, he found it more difficult to stave off ugly memories. Hopefully the new job would help. Security chief at the National Indoor Arena was a prestige post. He
hadn’t expected to land it.

Suddenly the dog yanked its lead. Crawford swore under his breath, almost lost his footing. Jasper strained forward, tail bristling; the deep growl in his throat was normally a prelude to
prolonged barking. Crawford spoke gently while he scanned the street, wondering what had spooked the animal. Rustling leaves? A cat lurking in the bushes? No matter. The dog was already distracted,
sniffing a gatepost as if his life depended on it.

Crawford relaxed, thought again about the future. The NIA contract would start when he and Josie returned from New York next month. She wanted to renew their wedding vows during the trip. It
wasn’t a lot to ask. At times over the years it seemed he’d been married to the job more than his wife. There was ground to make up; he looked forward to it.

Panting, Jasper halted obediently at the kerb, waited for Crawford’s go-ahead. The ex-cop patted the dog’s head, whispered soothing words as they began to cross.

Just as the black four-by-four burst out from shadows on the right. No lights. No warning. Engine gunned, aimed at Crawford.

Wide-eyed, panic-stricken, he tried to leap away, but the vehicle was moving too fast. There was nowhere to run, no place to hide. His last coherent thought was that the driver had been lying in
wait: it was no accident.

The impact flung both Crawford and the dog into the air. Crushing blinding pain lasted only seconds. The final sound he heard was the sickening crunch of his skull smashing into concrete.
Motionless, he lay on his side; torchlight flickered on the planes of his face as he stared sightlessly down the street.