Read Haroun and the Sea of Stories Online

Haroun and the Sea of Stories 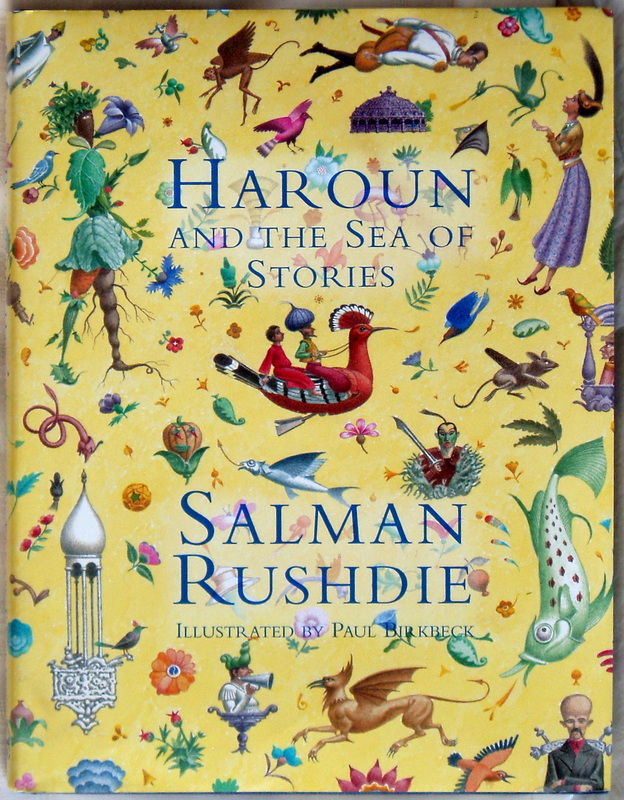 ‘A lively, wonderfully inventive comic tale … his own Sea of Stories from which he drew this entertaining and moving book continues to flow as clear and brilliant as ever’ — Alison Lurie,
New York Times Book Review

‘Rushdie’s most eloquent and compelling gesture as a writer, father and citizen’ — Edward Said,
Independent on Sunday

Haroun and the Sea of Stories

Chapter 1: THE SHAH OF BLAH

Chapter 4: AN IFF AND A BUTT

Chapter 7: INTO THE TWILIGHT STRIP

Chapter 12: WAS IT THE WALRUS?

ABOUT THE NAMES IN THIS BOOK

All our dream-worlds may come true.

Fairy lands are fearsome too.

As I wander far from view

Read, and bring me home to you.

The Shah of Blah

There was once, in the country of Alifbay, a sad city, the saddest of cities, a city so ruinously sad that it had forgotten its name. It stood by a mournful sea full of glumfish, which were so miserable to eat that they made people belch with melancholy even though the skies were blue.

In the north of the sad city stood mighty factories in which (so I’m told) sadness was actually manufactured, packaged and sent all over the world, which never seemed to get enough of it. Black smoke poured out of the chimneys of the sadness factories and hung over the city like bad news.

And in the depths of the city, beyond an old zone of ruined buildings that looked like broken hearts, there lived a happy young fellow by the name of Haroun, the only child of the storyteller Rashid Khalifa, whose cheerfulness was famous throughout that unhappy metropolis, and whose never-ending stream of tall, short and winding tales had earned him not one but two nicknames. To his admirers he was Rashid the Ocean of Notions, as stuffed with cheery stories as the sea was full of glumfish; but to his jealous rivals he was the Shah of Blah. To his wife, Soraya, Rashid was for many years as loving a husband as anyone could wish for, and during these years Haroun grew up in a home in which, instead of misery and frowns, he had his father’s ready laughter and his mother’s sweet voice raised in song.

Then something went wrong. (Maybe the sadness of the city finally crept in through their windows.)

The day Soraya stopped singing, in the middle of a line, as if someone had thrown a switch, Haroun guessed there was trouble brewing. But he never suspected how much.

Rashid Khalifa was so busy making up and telling stories that he didn’t notice that Soraya no longer sang; which probably made things worse. But then Rashid was a busy man, in constant demand, he was the Ocean of Notions, the famous Shah of Blah. And what with all his rehearsals and performances, Rashid was so often on stage that he lost track of what was going on in his own home. He sped around the city and the country telling stories, while Soraya stayed home, turning cloudy and even a little thunderous and brewing up quite a storm.

Haroun went with his father whenever he could, because the man was a magician, it couldn’t be denied. He would climb up on to some little makeshift stage in a dead-end alley packed with raggedy children and toothless old-timers, all squatting in the dust; and once he got going even the city’s many wandering cows would stop and cock their ears, and monkeys would jabber approvingly from rooftops and the parrots in the trees would imitate his voice.

Haroun often thought of his father as a Juggler, because his stories were really lots of different tales juggled together, and Rashid kept them going in a sort of dizzy whirl, and never made a mistake.

Where did all these stories come from? It seemed that all Rashid had to do was to part his lips in a plump red smile and out would pop some brand-new saga, complete with sorcery, love-interest, princesses, wicked uncles, fat aunts, mustachioed gangsters in yellow check pants, fantastic locations, cowards, heroes, fights, and half a dozen catchy, hummable tunes. ‘Everything comes from somewhere,’ Haroun reasoned, ‘so these stories can’t simply come out of thin air …?’

But whenever he asked his father this most important of questions, the Shah of Blah would narrow his (to tell the truth) slightly bulging eyes, and pat his wobbly stomach, and stick his thumb between his lips while he made ridiculous drinking noises,
glug glug glug
. Haroun hated it when his father acted this way. ‘No, come on, where do they come from really?’ he’d insist, and Rashid would wiggle his eyebrows mysteriously and make witchy fingers in the air.

‘From the great Story Sea,’ he’d reply. ‘I drink the warm Story Waters and then I feel full of steam.’

Haroun found this statement intensely irritating. ‘Where do you keep this hot water, then?’ he argued craftily. ‘In hot-water bottles, I suppose. Well, I’ve never seen any.’

‘It comes out of an invisible Tap installed by one of the Water Genies,’ said Rashid with a straight face. ‘You have to be a subscriber.’

‘And how do you become a subscriber?’

‘Oh,’ said the Shah of Blah, ‘that’s much Too Complicated To Explain.’

‘Anyhow,’ said Haroun grumpily, ‘I’ve never seen a Water Genie, either.’ Rashid shrugged. ‘You’re never up in time to see the milkman,’ he pointed out, ‘but you don’t mind drinking the milk. So now kindly desist from this Iffing and Butting and be happy with the stories you enjoy.’ And that was the end of that.

Except that one day Haroun asked one question too many, and then all hell broke loose.

The Khalifas lived in the downstairs part of a small concrete house with pink walls, lime-green windows and blue-painted balconies with squiggly metal railings, all of which made it look (in Haroun’s view) more like a cake than a building. It wasn’t a grand house, nothing like the skyscrapers where the super-rich folks lived; then again, it was nothing like the dwellings of the poor, either. The poor lived in tumbledown shacks made of old cardboard boxes and plastic sheeting, and these shacks were glued together by despair. And then there were the super-poor, who had no homes at all. They slept on pavements and in the doorways of shops, and had to pay rent to local gangsters for doing even that. So the truth is that Haroun was lucky; but luck has a way of running out without the slightest warning. One minute you’ve got a lucky star watching over you and the next instant it’s done a bunk.

In the sad city, people mostly had big families; but the poor children got sick and starved, while the rich kids overate and quarrelled over their parents’ money. Still Haroun wanted to know why his parents hadn’t had more children, but the only answer he ever got from Rashid was no answer at all:

‘There’s more to you, young Haroun Khalifa, than meets the blinking eye.’

Well, what was
that
supposed to mean? ‘We used up our full quota of child-stuff just in making you,’ Rashid explained. ‘It’s all packed in there, enough for maybe four-five kiddies. Yes, sir, more to you than the blinking eye can see.’

Straight answers were beyond the powers of Rashid Khalifa, who would never take a short cut if there was a longer, twistier road available. Soraya gave Haroun a simpler reply. ‘We tried,’ she sadly said. ‘This child business is not such an easy thing. Think of the poor Senguptas.’