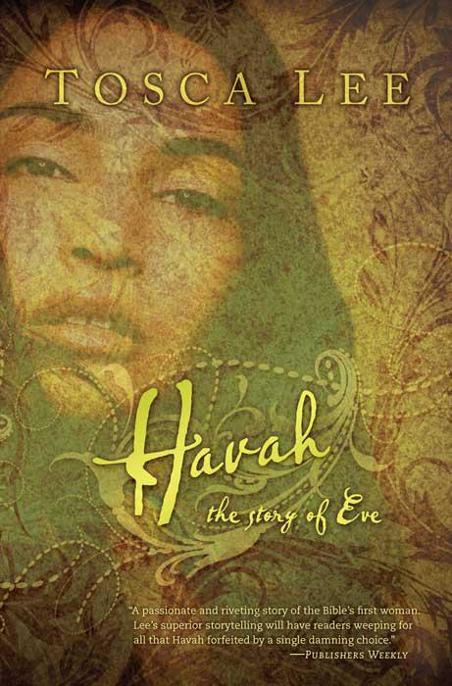 A passionate and riveting story of the Bible’s first woman. Lee’s superior storytelling will have readers weeping for all that Havah forfeited by a single damning choice.

Havah
is a novel with boundless imagination.

Tosca Lee is the most evocative storyteller to come along in ages. Never has the account of the Fall been so humanized.

An enchanting story masterfully told by an extraordinary wordsmith.

—Robert Liparulo,
author of
Deadfall
and
Comes a Horseman

With beautiful prose and breathtaking description, Tosca Lee has breathed new life into the story we thought we knew so well.

Tosca Lee has given us a veritable literary feast in
Havah.
Her vivid story of the original earth mother nourishes while her delicious, sensuous use of language delights. Devour it.

The story of Eve comes alive in this interpretation of the first people of the Bible. Even today, this story of love, longing, and loss offers encouragement.

Much has been written about Eve . . . but I doubt her heart has ever been so deeply plumbed as in this lyrical novel by Tosca Lee.

Rich and mesmerizing. Tosca Lee’s prose is breathtaking, her story of grace utterly transforming.
Havah
is nothing less than a masterpiece.

—Nicole Baart,
Christy Award Finalist and author of
The Moment Between

I have never read a book like
Havah.
It’s brilliantly conceived, uniquely delivered, and phenomenally profound.

I found myself fascinated by Tosca Lee’s mind, her capacity to spin a story, and the sheer volume of research that must’ve informed this compelling read.

Havah
is not only a novel full of beautiful prose; it is a book that causes the reader to pause and consider the state of the soul within.

In
Havah
, Lee demonstrates her ability to develop a character that goes far beyond cliché. Lee dares again to look into Christian assumption.

Havah
is an epic and explosive novel. Stunning prose and evocative imagery hallmark this retelling of life’s beginnings through the heart and voice of Eve.

Lee’s “fiction” somehow doesn’t feel like make-believe at all.

Evocative, lush. . . . This is not formula “Christian Fiction” and avoids providing easy spiritual answers to the inevitable questions the characters face.

Havah
has set a very high standard in the realm of speculative fiction.

Imagery so real I could see for myself the sparkling, newly formed world.

I never read a novel twice, but I double-read this one, with intense delight to the last page, both times.

Going beyond Sunday school stereotypes,
Havah
introduces us to a gloriously human Eve who reflects the strength and beauty of any woman or man who truly hungers for the presence of God.

With delicious prose, Tosca Lee captures the passion, innocence, fatal mishap, and tragedy that were our first mother’s life.

—Karen Lee-Thorp,
coauthor of the
Doing Life Together Bible studies

A moving story that plumbs the depths of human experience, faith, and spirituality.

The emotional pull of this story is truly divine. Tosca’s powerful use of language is very moving and the ending is perfectly written. I stand amazed.

This is the story of Adam and Eve as it really might have been. The writing is poetic and lyrical, the story compelling and captivating.

—Virginia Smith,
author of
Stuck in the Middle

Our beginning deeply, richly, beautifully imagined, lifting our hearts in worship to the One that is. 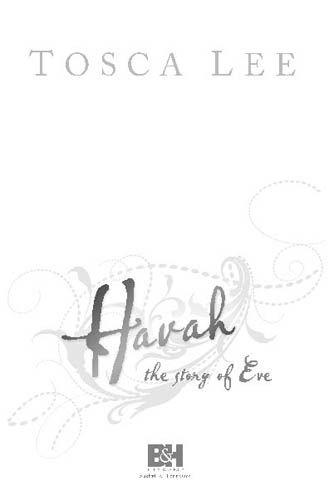 For my mother and for you.

I have seen paradise and ruin. I have known bliss and terror. I have walked with God.

And I know that God made the heart the most fragile and resilient of organs, that a lifetime of joy and pain might be encased in one mortal chamber.

I still recall my first moment of consciousness—an awareness I’ve never seen in the eyes of any of my own children at birth: the sheer ignorance and genius of consciousness, when we know nothing and accept everything.

Of course, the memory of that waking moment is fainter now, like the smell of the soil of that garden, like the leaves of the fig tree in Eden after dawn—dew and leaf green. It fades with that sense of something once tasted on the tip of the tongue, savored now in memory, replaced by the taste of something similar but never quite the same.

His breath a lost sough, the scent of earth and leaf mold that was his sweaty skin has faded too quickly. So like an Eden dawn—dew on fig leaves.

His eyes were blue, my Adam’s.

How I celebrated that color, shrouded now in shriveled eyelids—he who was never intended to have even a wrinkle!

But even as I bend to smooth his cheek, my hair has become a white waterfall upon his Eden—flesh and loins that gave life to so many.

I think for a moment that I hear the One and that he is weeping. It is the first time I have heard him in so long, and my heart cries out: He is dead! My father, my brother, my love!

I envy the earth that envelops him. I envy the dust that comes of him and my children who sow and eat of it.

This language of Adam—the word that meant merely “man” before it was his name—given him by God himself, is now mine. And this is my love song. I will craft these words into the likeness of the man before I, too, return to the earth of Adam’s bosom.

My story has been told in only the barest of terms. It is time you heard it all. It is my testament to the strength of the heart, which has such capacity for joy, such space for sorrow, like a vessel that fills and fills without bursting.

My seasons are nearly as many as a thousand. So now listen, sons, and hear me, daughters. I, Havah, fashioned by God of Adam, say this:

But for me, there was Adam.

A whisper in my ear:
Wake!

BLUE. A SEA AWASH with nothing but a drifting bit of down, flotsam on an invisible current. I closed my eyes. Light illuminated the thin tissues of my eyelids.

The Fenway Foul-Up by David A. Kelly
Ride the River (1983) by L'amour, Louis - Sackett's 05
Chasing Chaos: My Decade In and Out of Humanitarian Aid by Jessica Alexander
A Fresh Start by Grace, Trisha
Possession of the Sheikh: (Interracial BWWM Erotica) (The Men of Sharjah Series Book 2) by Nadia Aidan
Dead Bolt by Blackwell, Juliet
Alicia Roque Ruggieri by The House of Mercy
Naomi Grim by Tiffany Nicole Smith
Blooms of Darkness by Aharon Appelfeld, Jeffrey M. Green
Resurrection in Mudbug by Jana Deleon