Haven: Revenge of the Viper 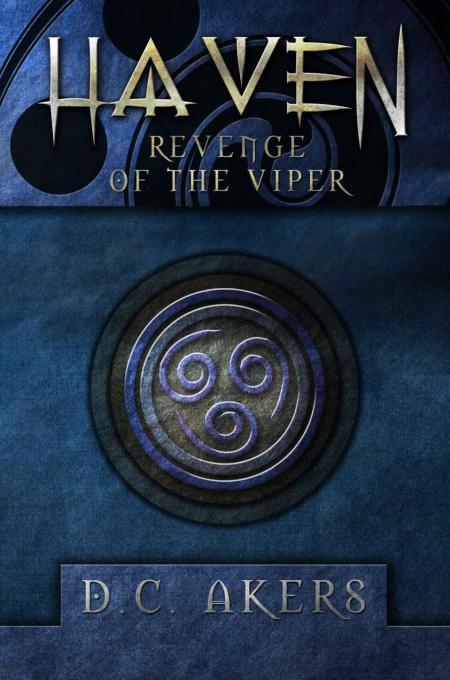 Haven: Revenge of the Viper

Visit us on the Web
www.dc-akers.com

No one walks alone on the journey of life; therefore, I would like to thank those who joined me, and walked beside me, and helped me along the way continually urging me to write.

Perhaps somehow this book and its pages will be seen as “thanks” to all of you who have helped make this dream possible.

Much of what I have learned over the years has come as the result of being a father to two wonderful children, Myranda and Sarah, who, in their own ways, inspired me and subconsciously contributed a tremendous amount to the content of this book. A little bit of each of them will be found here weaving in and out of the pages—thanks kids!

I would also like to thank a group of individuals with amazing talent. They have dedicated endless hours of their time, knowledge, ideas, and numerous tips—all of which culminated in the completion of this book. So to Clare Gilbert, Krista Bohr, Terri May, and Skip Morris, thank you for everything and most of all, thank you for your friendship.

Other Books by D.C. Akers

“A lie is but a whisper of the treachery yet to come.”

T
he two cloaked men entered the hallway, their staffs in hand, eyes narrowed, and faces taut with worry. They acknowledged one another with a slight tilt of the head as they rounded a corner of the dimly lit corridor.

“Any word?” asked Vallen, the younger of the two.

“No, nothing,” replied Demetrius.

Large ivory sconces burned with a low flame, casting elongated shadows across the red marble floor and down the center of the stone corridor. The two men marched in unison, their knee-high black boots echoing as they struck the ground and their long emerald-colored cloaks snapping at their feet.

“Was she on assignment?” asked Vallen, his gray eyes gleaming between flickers of light. He stood six feet tall and his features were rugged. He had high cheek bones, a thin nose, and a pronounced jaw line that swept back into his long brown hair. Demetrius, on the other hand, was much older but just as tall. His gray hair was short and unkempt. His facial features were softer than Vallen’s with a kind familiarity about them.

Vallen, a Keeper for the last ten years, had not worked with Demetrius often; most of what he knew of Demetrius came from stories. Demetrius was a legend amongst the Keepers, known for his wisdom and power of the elements. He was a battle-hardened veteran and war hero. But like most heroes, that title had come with a price, one of personal loss and great tragedy. If Demetrius Lore was worried then the situation was definitely grim. Something had gone wrong. Terribly wrong.

Demetrius turned and looked at Vallen for the first time since entering the hallway. Demetrius wore a blank expression.

“I’m sorry, what did you say?” he asked, rounding the next corner.

Two Centurions stood at their post mid-way down the corridor. They nodded as the two Keepers passed them. Draped in long, cobalt blue cloaks and silver armor, the Centurions were more than just soldiers; they were Majesty guards. Their elegant silver armor hung in layers, like thin overlapping leaves from their shoulders down to their arms. The Majesty Crest was centered on their breast plates, which were made of larger bands of silver metal wrapped vertically around their chest, down their torso, thighs, and calves. Their helmets featured large Falcon wings riveted to the front as well as nose and full cheek guards.

Each Centurion held a long silver staff with an exquisitely decorated pommel made of crushed sapphire and silver. The pommel was forged in the shape of the Majesty Crest.

Vallen and Demetrius approached the end of the corridor, which was dark except for the dim light from the two large caldrons that flanked the entrance to the Majesty chambers.

“I was asking if she was on assignment for the Majesty,” Vallen said again. But Demetrius still did not answer. His solemn glare was one of confusion and emptiness. Finally, as they made their way down the massive staircase into the main hall, Demetrius answered.

“I know as much as you,” he said abruptly. “I was in Bayville when I received the scroll. I was told it was urgent, that it regarded Holly, and to return to the Majesty at once.”

So that’s it,
Vallen thought.
Demetrius is worried about Holly.
He nodded in agreement; he had received the same scroll. But for him, there was one difference—it was not personal.

The large hallway came to an end, opening into a grand room filled with statues of wild horses, ancient weapons, and a large ornate table made of bronze that stood in the center of the room. A centerpiece of five flickering purple flames hovered inches above the table and a perimeter of blue torches attached to magnificent stone pillars served as ambient light. Their glow illuminated the walls of the chamber, revealing elaborate rectangular carvings of white marble floating twenty feet above the ground. Inscribed on the carvings were the names of fallen soldiers who had given their lives protecting Haven’s freedom.

The crest of the Majesty was magnificently carved on the center of the gray slate floor. It was a cobalt blue star with small black spheres outlined in silver between each point. Inside each sphere was the symbol for one of the Estates: a raven representing the Vampires, a mace for the Orcs, an arrow and shield for the Elves, and a crescent moon with three stars for the Witches. The fifth was the new addition to the Estates—a pair of crossed swords representing the Goblin race. The crest was encompassed in a thin silver band of unity.

The two men hurried into the chamber, discreetly proceeded to the back of the room and waited for the summit to begin. The Orcs and Elvin delegates were already seated, as were the Witches and Vampires.

Atamar von Bogdan, the Minister of Justice, stood in the center of the room with Bellisoria Vontella, the Witch High Priestess. Atamar was dressed in long black robes with sleeves that hung past his palms. His body was thin and gangly, and his bald head was oddly shaped, like a large egg. He had a long hooked nose and chestnut-colored eyes. The man resembled a large vulture more than a Minister of anything.

It didn’t help matters that Atamar stood next to the lovely Bellisoria either. With her long, flowing black hair and creamy olive skin, she was a striking woman. Her beauty was timeless—no one outside Haven would have ever guessed that she was well over six hundred years old.

Bellisoria gazed politely around the room, nodding to acknowledge the other delegates. Her eyes, the color of honey, were mesmerizing, and her thick, full lips occasionally gave way to a kind smile that demanded attention.

Vallen scrutinized Atamar from the back of the room. Something was not right about the Minister, he surmised. Atamar’s eyes shifted from side to side and he was fidgeting as he stood before the Majesty. His normal swagger and military bearing were all but gone. Bellisoria, on the other hand, stood poised, her demeanor as calm and collected as always. She was considered royalty by most, a queen by some, and the leader of the Majesty by all.

She was dressed in an elegant, slim-fitted, v-neck satin gown covered in lavender lace. A chapel-length train and covered buttons completed the elegant ensemble. A pendant of diamonds and amethyst hung from a silver chain around her neck. The glimmering pendant was fashioned in the shape of an eye, the symbol of her coven. An ornate silver sheath concealing her wand hung on a thin silver chain draped around her waist.

The Great Hall of the Majesty continued to bluster with its usual conversations of problems and situations that affected its leaders. Whispers of negotiations and commerce fluttered around the table like usual until a single voice rang out, silencing the Majesty leaders.

“Where are they?” asked one of the three Vampires.

Vallen recognized the vampire as Kellen Doru, the prelate for Lord Valteen. Like all vampires, Kellen’s eyes were a light violet that glowed luminescent against his pale pallid skin.

Darkling by Rice, K.M.
Guarding the Soldier's Secret by Kathleen Creighton
Lost in Paradise by Tianna Xander
7 Steps to Midnight by Richard Matheson
Elders and Betters by Ivy Compton-Burnett
Ask Me to Stay (Honky Tonk Angels #4) by Ciana Stone
Short Soup by Coleen Kwan
Voice by Garraty, Joseph
The Princess and the Pirates by John Maddox Roberts
Dispatches from the Edge: A Memoir of War, Disasters, and Survival by Anderson Cooper