Read He Lover of Death Online

He Lover of Death 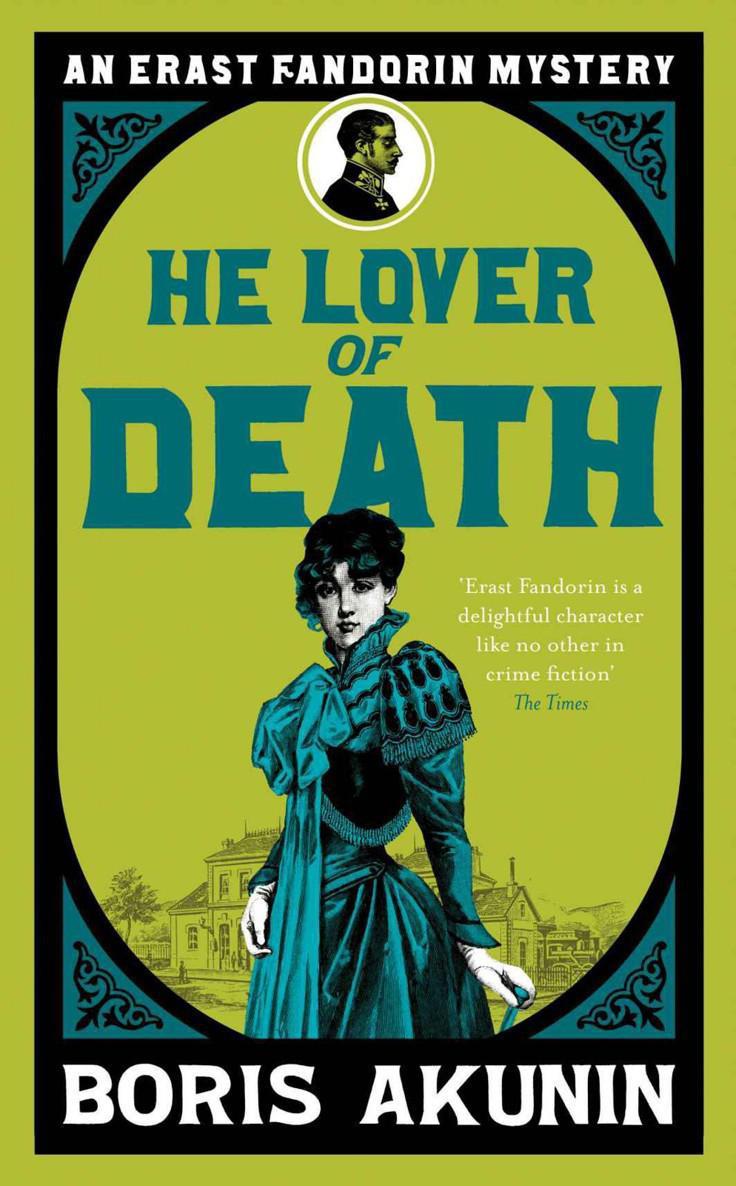 Senka Skorikov, orphan and urchin, has been abandoned to the murky world of Moscow's gangster district. While picking a pocket or two, he glimpses the most beautiful woman he has ever seen, and joins the gang of her overlord lover, The Prince, so desperate he is to meet her. Senka climbs the criminal ranks, uncovering a stash of precious metal, and gradually capturing the heart of his beloved Death - so named for the life expectancy of her lovers. But as the bandit community balks at his success on both fronts, threats on his life begin to pour in . A dandy and his 'Chinese' sidekick seem to be taking an inordinate interest in Senka's welfare, and it becomes clear that those threatening Senka are linked to a spate of murders, grizzly even by underworld standards. Fandorin must unweave a tangled web of narcotics, false identities and organised crime - but can he survive an encounter with the ever-alluring Death unscathed? Find out in the darkest Fandorin to date!

Senka Skorikov, orphan and urchin, has been abandoned to the murky world of Moscow's gangster district. While picking a pocket or two, he glimpses the most beautiful woman he has ever seen, and joins the gang of her overlord lover, The Prince, so desperate he is to meet her. Senka climbs the criminal ranks, uncovering a stash of precious metal, and gradually capturing the heart of his beloved Death - so named for the life expectancy of her lovers. But as the bandit community balks at his success on both fronts, threats on his life begin to pour in . A dandy and his 'Chinese' sidekick seem to be taking an inordinate interest in Senka's welfare, and it becomes clear that those threatening Senka are linked to a spate of murders, grizzly even by underworld standards. Fandorin must unweave a tangled web of narcotics, false identities and organised crime - but can he survive an encounter with the ever-alluring Death unscathed? Find out in the darkest Fandorin to date!

The Death of Achilles

She Lover of Death

Pelagia and the White Bulldog

Pelagia and the Black Monk

Pelagia and the Red Rooster

First published in Great Britain in 2010 by Weidenfeld & Nicolson

This ebook first published in 2010 by Weidenfeld & Nicolson

The right of Boris Akunin and Andrew Bromfield, to be identified as the author and translator of this work respectively, has been asserted in accordance with the Copyright, Designs and Patents Act 1988.

All rights reserved. No part of this publication may be reproduced, stored in a retrieval system or transmitted in any form or by any means, without the prior permission in writing of the publisher, nor to be otherwise circulated in any form of binding or cover other than that in which it is published without a similar condition, including this condition, being imposed on the subsequent purchaser.

All the characters in this book are fictitious, and any resemblance to actual persons living or dead is purely coincidental.

HOW SENKA BECAME A KHITROVKAN

HOW SENKA SETTLED IN AT THE NEW PLACE

HOW SENKA GOT TO KNOW DEATH

HOW SENKA CAUGHT DESTINY BY THE TAIL

HOW SENKA SHOWED WHAT HE WAS MADE OF

HOW SENKA WENT ON A REAL JOB

HOW SENKA SAT IN THE PRIVY CUPBOARD

HOW SENKA RAN AND HID AND THEN GOT THE HICCUPS

HOW SENKA HUNTED FOR TREASURE

HOW SENKA WAS NABBED

HOW SENKA GOT RICH

HOW SENKA LIVED IN LUXURY

HOW SENKA WAS DEATH’S LOVER

HOW SENKA’S TONGUE WAS LOOSENED

HOW SENKA SAW A SCENE FROM BOCCACCIO

HOW SENKA WAS DISILLUSIONED WITH PEOPLE

HOW SENKA PULLED THE CHOKE OUT TOO FAR

HOW SENKA READ OTHER PEOPLE’S LETTERS

HOW SENKA WAS A LITTLE KIKE

HOW SENKA WAS A MAMSELLE

HOW SENKA WAS A PEACHER

HOW SENKA TOOK AN EXAM

HOW SENKA TRIED TO KEEP UP

HOW SENKA TRIED TO KEEP UP (continued)

HOW SENKA READ THE NEWSPAPER

Of course, that wasn’t what she was called to begin with. It was something ordinary, a proper Russian name. Malaniya, maybe, or Agrippina. And she had a family name to go with it, too. Well everyone’s got one of them, don’t they? Your lop-eared mongrel Vanka doesn’t have a family name, but a person’s got to have one, because that’s what makes them a person.

Only when Speedy Senka saw her that first time, she already had her final moniker. Nobody ever spoke about her any other way –they’d all forgotten her first name
and
her family name.

And this was how he happened to see her.

He was sitting with the lads on the bench in front of Deriugin’s corner shop. Smoking baccy and chewing the fat.

Suddenly, up drives this jaunty little gig. Tyres pumped fat and tight, spokes painted all golden, yellow leather top. And then out steps a bint, the like of which Senka has never seen before, not on the swanky Kuznetsky Most, not even in Red Square on a church holiday. But no, she
wasn’t
a bint – a lady,
that’s
what she was, or, better still, a
damsel.
Black plaits in a crown on top of her head, a fancy coloured silk shawl on her shoulders, and her dress was silk too, it shimmered. But the shawl or the dress didn’t matter, it was her face, it was so . . . so . . . well, there’s just no words for it. One look, and you melted inside. And that was what Senka did, melted inside.

‘Who’s that fancy broad?’ he asked, and then, so as not to give himself away, he spat through closed teeth (he could gob farther than anyone else like that, at least six feet – that gap at the front was very handy). ‘It’s plain to see, Speedy,’ Prokha said, ‘that you’re new round here.’ And right enough, Senka was still settling into Khitrovka back then, it was only a couple of weeks since he’d taken off from Sukharevka. ‘That ain’t a broad,’ says Prokha. ‘That’s Death!’ Senka didn’t twig straight off what death had to do with anything. He thought it was just Prokha’s fancy way of talking –like, she’s dead beautiful.

And she really was beautiful, no getting away from that. High clear forehead, arched eyebrows, white skin, scarlet lips and o-o-oh –those eyes! Senka had seen eyes like that on Cavalry Square, on the Turkestan horses: big and moist, but glinting with sparks of fire at the same time. Only the eyes of the damsel who got out of that fancy carriage were lovelier even than the eyes on those horses.

Senka’s own eyes popped out of his head as he gaped at the miraculously beautiful damsel, and Mikheika the Night-Owl brushed the baccy crumbs off his lip then elbowed him in the side: ‘Ogle away, Speedy,’ he says, ‘but don’t overdo it. Or the Prince will lop your ear off and make you eat it, like he did that time with that huckster from Volokolamsk. He took a shine to Death too, that huckster did. But he ogled too hard.’

And Senka didn’t catch on about Death this time either – he was too taken by the idea of eating ears.

‘What, and did the huckster eat it, then?’ he asked in amazement. ‘I wouldn’t do that, no way.’

Prokha took a swig from his beer. ‘Yes you would,’ he said. ‘If the Prince asked you nice and polite, like, you’d be only too happy to do it and you’d say thank you, that was very tasty. That huckster chewed and chewed on his ear, but he couldn’t swallow it, and then the Prince lopped off the other one and stuck it in his mouth. And to make him get a move on, he kept pricking him in the belly with his pen – his knife, I mean. That huckster’s head swelled up afterwards and went all rotten. He howled for a couple of days, and then croaked, never did get back to that Volokolamsk of his. That’s the way things are done in Khitrovka. So just you take note, Speedy.’

It goes without saying that Speedy had heard about the Prince, even though he hadn’t been doing the rounds in Khitrovka for long. Who hadn’t heard about the Prince? The biggest hotshot bandit in the whole of Moscow. They talked about him at the markets, they wrote about him in the papers. The coppers were hunting him, but they couldn’t even get close. Khitrovka didn’t give up her own –everyone there knew what happened to squealers.

But I still wouldn’t eat my ear,
thought Senka.
I’d rather take the knife.

‘So, is she the Prince’s moll, then?’ he asked about the amazing damsel, out of simple curiosity, like. He’d decided he wasn’t going to gape at her any more, wasn’t really that interested, was he? And anyway, there was no one to gape at, she’d already gone into the shop.

‘Ith she?’ Prokha teased him (not all of Senka’s words came out right since one of his teeth was smashed out). ‘You’re the one who’s a moll.’

In Sukharevka, if you called one of the lads a moll, you earned yourself a right battering, and Senka took aim, ready to smash Prokha in his bony kisser, but then he changed his mind. Well, for starters, maybe the customs were different round here, and it wasn’t meant to be an insult. And then again, Prokha was a big strapping lad, so who could tell which of them would get the battering? And last but not least, he was really dying to hear about that girl.

Well, Prokha kept putting him off for a while, but then the story came out.

She used to live all right and proper, with Mum and Dad, out in the Dobraya Sloboda district, or maybe Razgulyai – anyway, somewhere over on that side of town. She grew up a real good-looker, as sweet as they come, and she had no end of admirers. So, just as soon as she came of age, she was engaged. They were on their way to the church to get married, she and her bridegroom, when suddenly these two black stallions, great huge brutes, darted right in front of their sleigh. If only they’d guessed they ought to say a prayer right then, things would have gone different. Or at least crossed themselves. Only no one guessed, or maybe there wasn’t enough time. The horses were startled something wicked by the black stallions and they went flying off the bank into the Yauza river on a bend. The bridegroom was crushed to death and the driver drowned, but the girl was fine. Not a scratch on her.

Well, all right, all sorts happen, after all. They took the lad off to bury him. And the bride walked beside the coffin. Grieving something awful, she was – they said she really did love him. And when they start crossing the bridge, right by the spotwhere it all happened, she suddenly shouts out: ‘Goodbye, good Christian people,’ and leaps head-first over the railings, down off the bridge. There had been a hard frost the day before, and the ice on the river was real thick, so by rights she should have smashed her head open or broken her neck. Ah, but that wasn’t what happened. She fell straight into this gap with just a thin crust of ice, dusted over with snow, plopped under the water – and was gone.

The Twilight of Lake Woebegotten by Harrison Geillor
Poker Face by Maureen Callahan
Divide & Conquer by Abigail Roux
Woodlock by Steve Shilstone
An Honest Ghost by Rick Whitaker
Mission by Patrick Tilley
Where Mercy Flows by Karen Harter
The Eight Walls of Rogar: An Epic Fantasy Adventure Series! (The Lost Kingdoms of Laotswend Trilogy--Book One) by Woodward, William
Wishful Kisses: A Fountain of Love Novella by Lakes, Krista
Bared Blade by Kelly McCullough