Healing Love (Love to the Extreme) 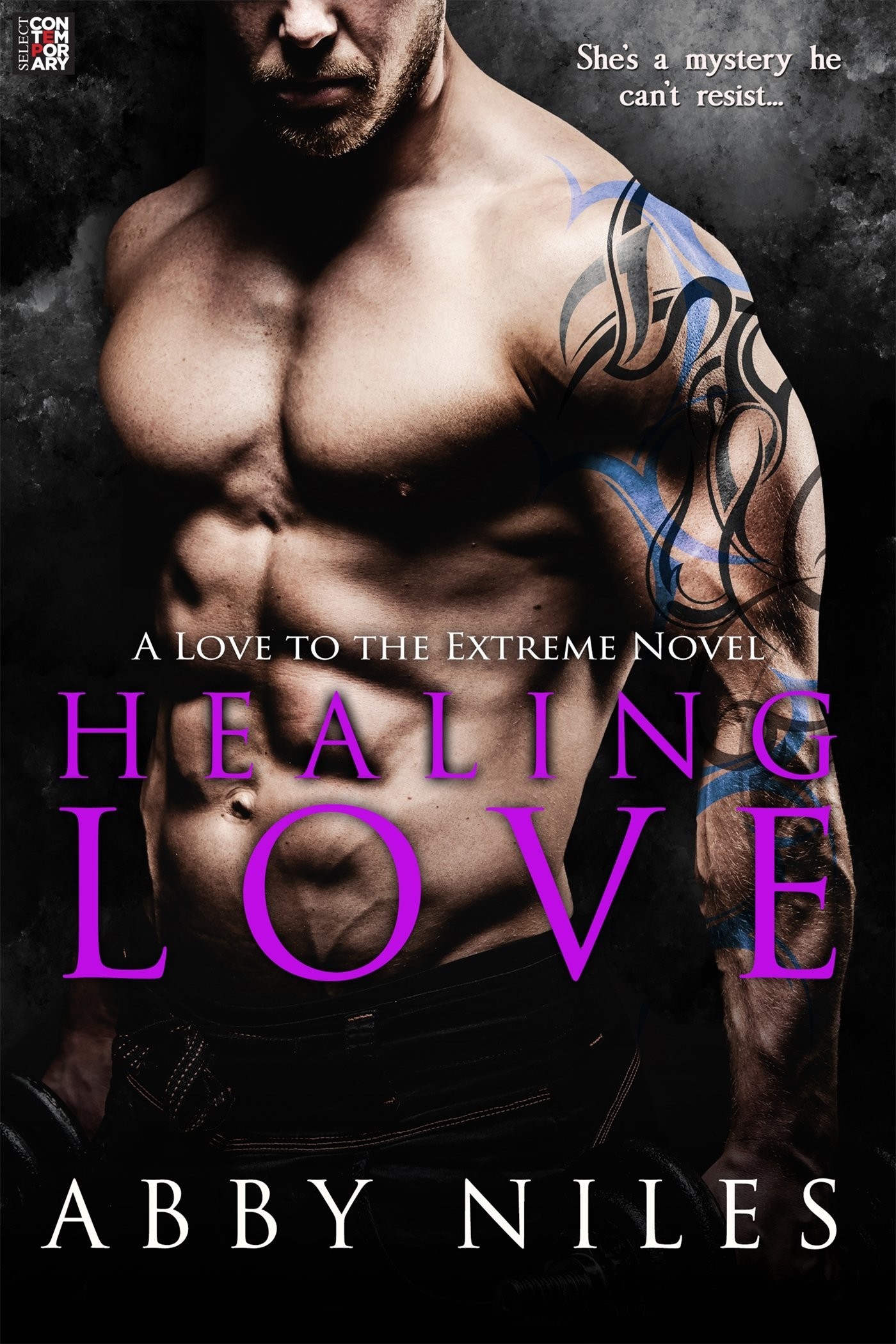 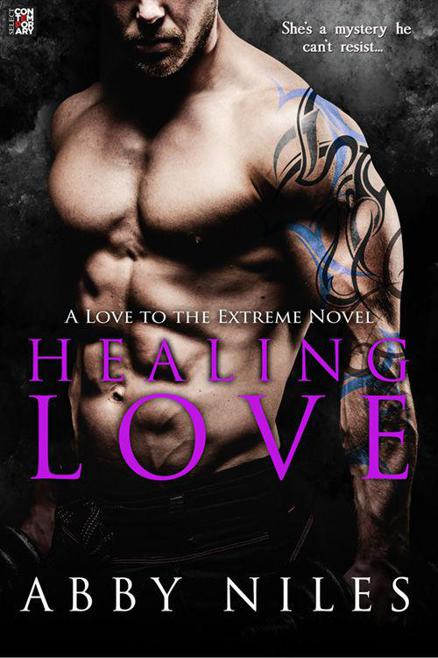 She’s a mystery he can’t resist...

Doctor Ella Watts wants her old life back. Desperately. But the past has returned for its rematch, and going back home—even telling anyone her real name—isn’t an option until she’s confident in her MMA abilities. Personal trainer Lance Black is the man to help her reach her goals. Not only is he toned, muscular, and gorgeous, he’s patient, a great teacher, and willing to treat her like a worthy opponent. Except his size makes her freeze whenever he gets too close. If Ella can’t learn how to overcome her fear of being attacked, she’ll never be able to move on with her life.

Underground fighter Lance Black knows there’s more to the mysterious blonde ninja than a beautiful woman determined to improve her fighting skills. She can best anyone close to her size—man or woman—but insists on working out with him, even though he’s got a good 70 pounds and several inches on her. Despite her reticence, he’s determined to get her to open up so he can help her get over her mental block. And if that means he can get to know her outside the gym, all the better.

As long as she never learns his secrets.

Discover the Love to the Extreme series…

Copyright © 2016 by Abby Niles. All rights reserved, including the right to reproduce, distribute, or transmit in any form or by any means. For information regarding subsidiary rights, please contact the Publisher.

Select Contemporary is an imprint of Entangled Publishing, LLC.

I’m glad I wasn’t a chicken.

Ella Watts fought the urge to snatch her driver’s license back from the bulky man sitting behind the desk. Keeping a low profile meant not drawing attention to herself in any way. Ripping the license from his hand would be doing exactly that.

As he made a copy on the scanner, she pasted on a pleasant smile and pretended to look around the sparsely decorated gym office as if there were nothing to worry about. And there wasn’t. Except for the small, inconsequential fact that the license she’d given Mac “The Snake” Hannon was as fake as her smile.

“Okay, Kelsey. Everything’s ready to go,” he said and handed the ID card back to her.

Ella breathed a sigh of relief. It was the first time she’d used it since having it made four days ago. So far, she’d been able to pay for everything—even the tiny furnished bungalow she’d rented from a sweet, elderly lady—with the cash she’d withdrawn from her bank account. A hefty amount of cash. She left only enough to pay her automatically withdrawn bills for a few months.

She wasn’t running away from her life. She just needed to hide for a while, and leaving a debit card trail behind her wasn’t exactly smart.

Mac tapped the paperwork together, placed it in a neat pile on the edge of his desk, then pushed back his chair. As he rose, he leaned over the desk. His menacing height towering over her made every muscle stiffen.

He offered his hand with a warm,
real
smile. “Welcome to Coolier Mixed Martial Arts, Kelsey. We’re happy to have you as a member.”

She silently cursed her automatic reaction. The big guys always did this to her. Even though she had trained around them for years, any sudden movement toward her, no matter how innocent, still freaked her out. That was just one of many reasons she was determined to train with a light-heavyweight. One way to get over a fear was to face it head-on.

Rising, she took his hand and shook it firmly, not breaking eye contact.
Never show weakness. Never allow intimidation. Always exude confidence.
The mantra helped center her, and the tension eased from her body. “Thank you. Everything’s set for tomorrow, then?”

“Yep,” he said, sitting back down and folding his fingers together on top of the desk. “You had an impressive list of requirements for your trainer, but I know the perfect person for the job. I’d introduce you, but”—he glanced at his watch and frowned—“he’s running a little late today.”

Hmm.
Not a great quality in a trainer. She needed dependability. She was on borrowed time. “Is he late a lot?”

Mac grimaced. Well, there was her answer.

“And there isn’t anyone here who isn’t late?”

“With everything you requested, Lance is your best fit. Just hold your judgment until you’ve trained with him. I promise you won’t be disappointed.”

She pressed her lips together. “Fine. But if he sucks in the least, I want a new trainer.”

Surprise widened the man’s eyes. Yeah, that had come out demanding, but she didn’t care. Training was essential to her getting back home and on with her life, and she refused to allow a slacker to interfere with it.

Ella nodded. “All right then. I’ll see you tomorrow.”

She left the office and made her way to the front of the gym, hoping she hadn’t made a mistake. She’d done her homework, though, before coming here today. Coolier Mixed Martial Arts had nothing but positive reviews. Owned by Ragin Coolier, the establishment hosted some well-known fighters that even she had heard of. However, a Lance had not been mentioned on the website. He must be a new addition, and he must be damned good if they allowed him to come and go as he pleased.

Either way, she’d give the guy one chance. If he turned out to be a waste of her time, she’d figure something else out. She glanced around. She really hoped it worked out though. This place had everything, including a ring. She needed to focus the most on sparring.

She opened the glass front door and stepped out into the cool October air. As she made her way down the sidewalk to her car, a pained grunt came from her left. She froze, listening intently for the sound to repeat. Not a second later another grunt sounded. She glanced toward the edge of the building then inched toward the alley.

As she reached the corner, she poked her head around and her stomach twisted hard. About fifteen feet away, three average-built guys surrounded a beefy blond man. One of the guys lunged at him, but the blond weaved out of the way, only to have another guy wrap his arms around the blond’s torso so his arms were pinned to his sides. The smaller man was no match for the blond. He easily broke out of the hold, then spun around and punched the guy. He doubled over, holding his face.

One of the others took advantage of the blond man’s distraction and landed a right jab on his chin. His head whipped to the side and he stumbled backward into a dumpster. With him in a weak position, both men attacked and sent fists into his gut, side, and head. Pained groans filled the air as he sank to his knees on the asphalt.

Jesus, they were going to kill him.

She slipped her cell from her pocket and dialed 911 with shaky fingers.

“There are three guys jumping another guy in the alley between Handover Street and McDowell,” she whispered. “Get here fast. Please.” She ended the call.

Panicked, she studied her surroundings. She couldn’t just stand here and let those three thugs continue to beat up on that man until the cops arrived. They might kill him. She’d never be able to forgive herself if that were to happen.

A Greater Music by Bae, Suah; Smith, Deborah;
Betsy and Billy by Carolyn Haywood
Lords of Honor by K. R. Richards
The Slam by Haleigh Lovell
Harder We Fade by Kate Dawes
What Happened at Midnight by Franklin W. Dixon
When That Rough God Goes Riding by Greil Marcus
Risk (It's Complicated Book 2) by Ann Christopher
The Lesson by Jesse Ball
Heather Graham by Bride of the Wind