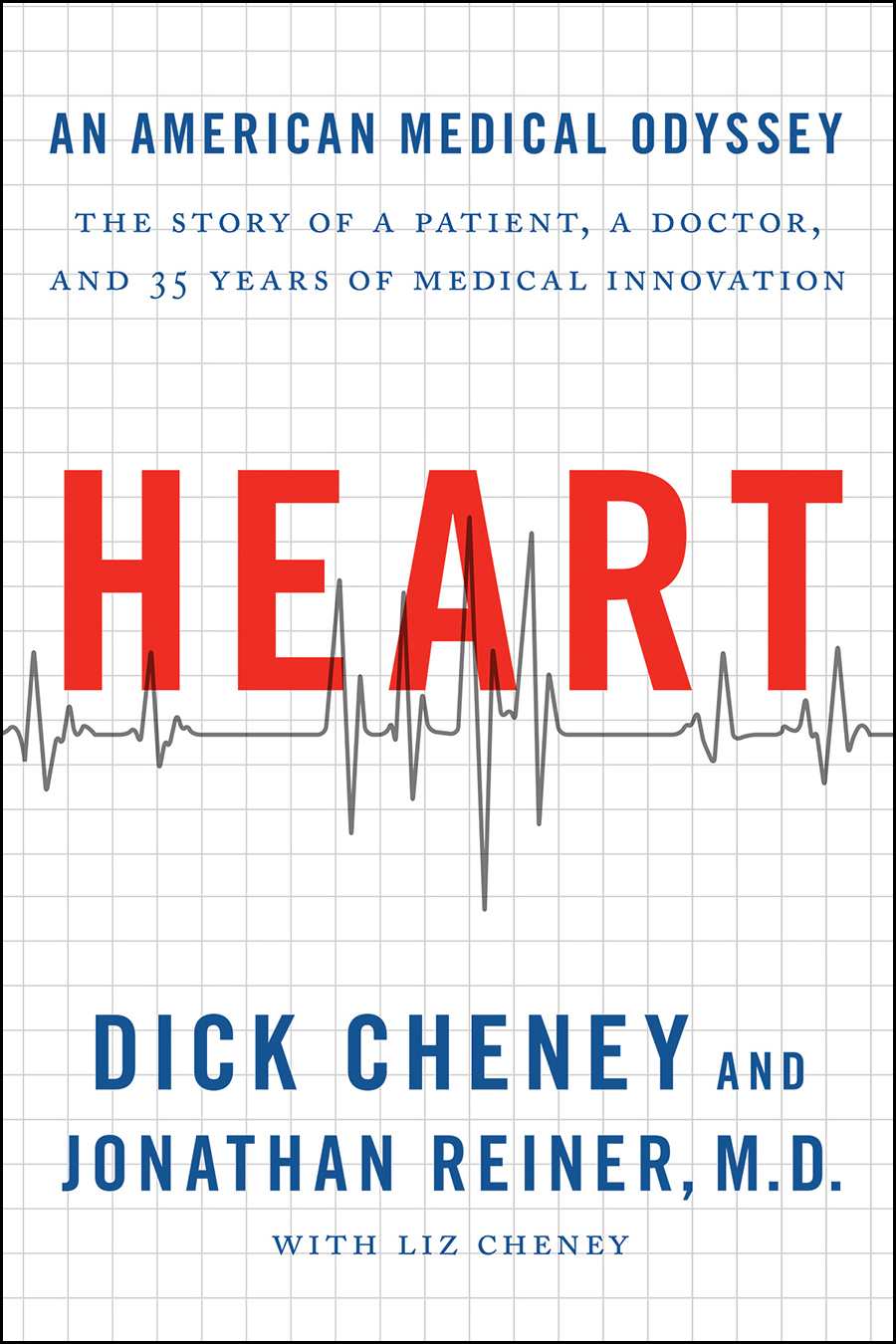 To my family, my medical team, and the donor of my heart

To Charisse, Molly, and Jamie, who fill my heart with joy

If this is dying,
I remember thinking,
it’s not all that bad.
It had been thirty-two years since my first heart attack. I’d had four additional heart attacks since then and faced numerous other health challenges. Now, in the summer of 2010, seventeen months after I left the White House, I was in end-stage heart failure.

On a trip to Jackson Hole, Wyoming, in May, it had become clear my weakened heart could not tolerate the high altitude. I returned to Washington on an emergency flight, and as the plane took off, I realized I might never see my beloved Wyoming again. Since then, my wife, Lynne, and I had been at our house in McLean, Virginia. When I got up in the morning, all I wanted to do was sit down in my big easy chair, watch television, and sleep.

What was happening to me was hardly a surprise. I had lived with coronary artery disease for many years, and I had long assumed it would be the cause of my death. Sooner or later, time and medical technology would run out on me. Now my heart was no longer providing an adequate supply of blood to my other vital organs. My kidneys were starting to fail. I believed I was approaching the end of my days, but that didn’t frighten me. I was pain free and at peace, and I had led a remarkable life.

I thought about final arrangements. I wanted to be cremated and have my ashes returned to Wyoming. It was a difficult subject to broach
with my family. They weren’t eager to discuss it. For them, talking about it made an already difficult situation even worse. But I needed them to know. And I needed to say good-bye. As my condition deteriorated that summer, my cardiologist, Dr. Jonathan Reiner, had raised the possibility of having a left ventricular assist device (LVAD) implanted in my chest, and I agreed to be briefed on it at Inova Fairfax Hospital in Northern Virginia, which has one of the most active LVAD programs in the country.

The LVAD transplant team showed me the device, which connects to the left ventricle, the main pumping chamber of the heart. The LVAD passes blood through a small pump operating at nine thousand revolutions per minute and returns it to the aorta, the largest artery in the human body, ensuring an adequate blood supply to the vital organs. The device is powered by a driveline that passes through the wall of the chest to an external set of batteries or an electrical outlet.

The idea of being kept alive by a battery-driven piece of equipment operating at high speed inside my chest was a bit daunting at first, but it soon became apparent that this option offered real hope and the possibility of extending my life long enough to be eligible for a new heart. Previously we had never really considered a heart transplant as an option for me because I clearly wouldn’t live long enough to work my way up the transplant list to become eligible for a heart. The average wait was about twelve months. The medical team explained that although the LVAD was originally designed as a bridge to a transplant, some patients were deciding to live with the device.

I was impressed with the individuals on the LVAD/transplant team: they clearly knew their business. It was also apparent that they respected and welcomed Jon Reiner, who although he practices at George Washington University Hospital, would be included as an integral part of the team. That carried great weight with me given all that Jon and I had been through together over the past fifteen years.

The preceding weeks had been challenging. I not only had many of the symptoms of a failing heart, I was also, due to the anticoagulants I was taking, suffering severe nosebleeds, including one so massive it required
emergency surgery and a number of blood transfusions. On more than one occasion that spring, we had found ourselves speeding down the George Washington Parkway in Northern Virginia toward my doctors and the emergency room at George Washington University Hospital in the District of Columbia. In addition, my heart failure was causing severe sleep apnea. As soon as I nodded off to sleep, I would find myself awake again, gasping for air.

On July 4, I’d experienced internal bleeding in my thigh and was rushed to George Washington University Hospital as fireworks lit up the night sky. At the hospital, they gave me narcotic painkillers, which, as we were on the way home and stuck in holiday traffic, caused me to be sick to my stomach. The list of things I could not do grew. I’d stopped climbing the stairs. I could no longer walk to the end of the driveway to pick up the morning newspapers. I barely had the strength to walk the length of the hallway between our bedroom and my office. My world shrank until I was barely able to leave my bed. By the time I was admitted to Inova Fairfax Hospital on July 6, 2010, it was clear that there really was no choice: without the LVAD surgery I would not survive.

My last memory of that evening is of Jon Reiner and the other doctors and my family gathered around my bed in the intensive care unit. The doctors explained that although they had originally scheduled the surgery for July 8, my situation was worsening and they recommended taking me immediately to the operating room. After I listened to the doctors, I asked Lynne and our daughters, Liz and Mary, what they thought. One by one, they each agreed that we should not delay. “Okay,” I said, “let’s do it.”

The numbers in the morning were bad; now, after 8:00 p.m., they were even worse. Dr. Shashank Desai and I agreed to meet in the cardiac surgery intensive care unit (ICU) to check on our patient one last time
before we left for the night. Shashank runs the advanced heart failure program at Inova Fairfax Hospital just outside Washington, DC, where we had admitted Dick Cheney, the former vice president of the United States, earlier in the day. When I entered the second-floor cardiac surgery ICU, I found Shashank standing just outside the vice president’s corner suite. Through a glass partition, I could see Cheney staring at a television across the room. He had an oxygen cannula under his nose and a glowing red pulse oxymetry sensor taped to his thumb. Telemetry leads ran from under his hospital gown, coalesced into a loose bundle, and spilled over the raised bedrail on their way to the adjacent rack of electronics. A blood pressure cuff around his bicep automatically inflated and deflated every few minutes, displaying its relentless march of numbers, waveforms, and alarms on a wall-mounted touch-screen monitor. A nurse exited the room and handed us a flow sheet with the patient’s latest labs. “These can’t be right,” I said softly, although I knew they probably were.

The prior months had not been good for Cheney. In December an arrhythmia would have killed him had his implanted defibrillator not delivered a resuscitating twenty-five joule shock. Six weeks later, an exsanguinating arterial nosebleed, intensified by anticoagulants, required emergency late-night surgery. At the end of February, Cheney had chest pain while staying on the Eastern Shore of Maryland and was taken by helicopter to George Washington University Hospital for treatment of a heart attack. In May, he had acute shortness of breath within hours of arriving in Wyoming that necessitated an immediate turnaround and admission to GW’s intensive care unit. Now, for the last week and a half, Cheney had required a continuous home infusion of milrinone, intravenous “rocket fuel” administered via a small, portable pump.

Milrinone typically is reserved for use in end-stage congestive heart failure, when the heart’s declining ability is no longer capable of sustaining vital organ function. Cheney’s initial response to the drug was impressive: his breathing and energy improved almost immediately. The benefit was short-lived, however, and at the end of June, his condition
took an abrupt turn for the worse. The vice president’s weight rose by several pounds, indicating retention of fluid, and his energy sharply waned, largely limiting him to a reclining chair or bed. On July 4 he again bled spontaneously, this time into his leg. The next day, labs obtained by a visiting nurse at Cheney’s home in Northern Virginia revealed a precipitous drop in his kidney function, triggering our decision to admit him to the hospital.

The kidneys, which are essential not just for fluid management but also for the regulation of blood pressure, electrolytes, and acid-base balance, account for only about 0.5 percent of a human’s total weight but receive about 25 percent of the total cardiac output (the volume of blood ejected by the heart each minute). So in patients with congestive heart failure, the kidneys act like a canary in a coal mine. When cardiac performance drops, the kidneys are often the first to take the hit.

In the morning, we escalated the milrinone infusion in an effort to squeeze just a little more function from Cheney’s depleted heart. Now, ominously, after several hours on the higher dose, his cardiac output had dropped, not risen. A normal cardiac output is about 5.5 liters per minute; Cheney’s was barely 2.

“He’s in North Carolina trying to get back,” Shashank replied.

Dr. Nelson Burton, a talented, senior surgeon at Fairfax, had extensive experience implanting ventricular assist devices (VADs) in patients with advanced heart failure. Although all VAD surgeons perform the more familiar cardiac surgical procedures like coronary artery bypass and valve replacement, relatively few cardiac surgeons have experience implanting VADs. Burton had been on the Outer Banks of North Carolina with his family celebrating his son’s homecoming after a tour of duty with the Marines in Afghanistan. Surgery for the vice president to implant a VAD had originally been scheduled for the following week, and Nelson was planning to return in a day or two. That was going to be too late.

Mrs. Cheney and Liz were with the vice president. I couldn’t hear what they were talking about, but I knew they weren’t prepared to hear what
I was about to say. Liz saw us outside the room and came out to talk.