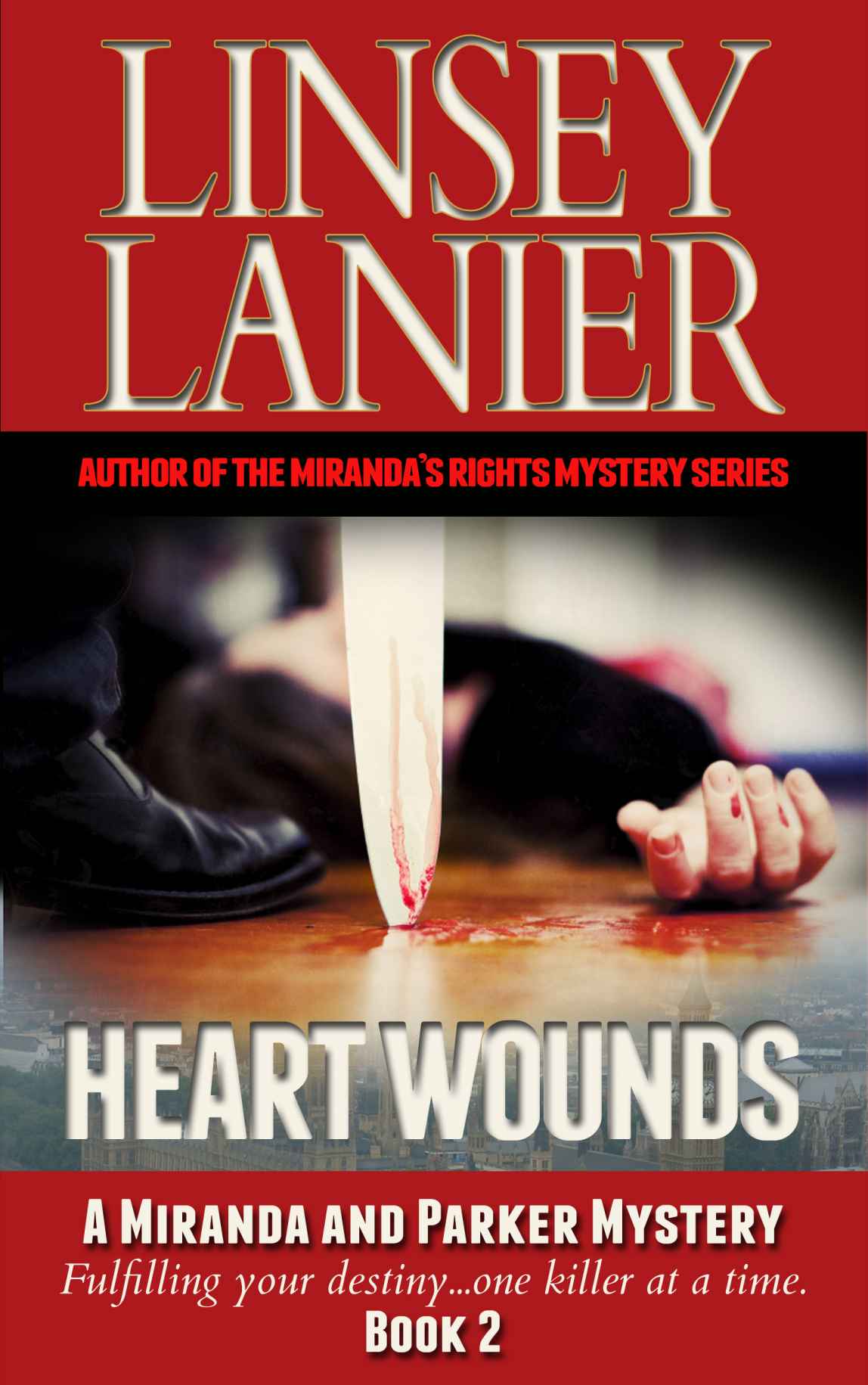 A Miranda and Parker Mystery

All rights reserved. This ebook may not be re-sold or given away to other people. If you are reading this book and did not purchase it, please return to your online distributor and purchase your own copy. Thank you for respecting the author’s work and helping her earn a living.

I love my readers and am truly grateful for all your support!

In the London Museum of Antiquity
, a heart-breaking event occurs. Someone steals the priceless, newly acquired Egyptian dagger used by Marc Antony to kill himself over Cleopatra. Beside himself, the museum director calls in Parker and Miranda to investigate.

C
an the detectives work out their issues before the theft escalates to murder?

“Happy families are all alike; every unhappy family is unhappy in its own way.” Leo Tolstoy

If all went as planned, it promised to be a most monumental day.

Sir Neville
Ravensdale sat on the wide rear portico of Eaton House in Surrey, England breakfasting with his wife of nineteen years. He was dressed in his best silk suit, an Ascot cravat of cobalt blue arranged carefully at his neck, a color Davinia once told him made his eyes sparkle.

He
had barely touched his croissant or his single poached egg. He hadn’t heard the warblers singing in the hawthorns or smelled the fragrance of the blossoming bluebells or noticed the neoclassical design of the hedgerows, which he greatly admired.

All he could think about was the dagger.

It was Egyptian, just as his years of study told him it would be. The gleam of its ornate hilt flashed in his mind just the way it had when he’d first seen it two years ago on the excavation site, the foreign dust in his throat, the sun’s heat forming sweat beads on his brow, his heart racing madly with excitement of the discovery and trepidation of what might lie ahead.

Just the way it did now.

He rested his fork across the Eaton china plate and picked up his teacup. “Positively everyone will be there, Davinia. I do wish you’d come.”

Not even a flinch.

Wearing a pale chiffon morning dress, her dark hair pulled back in an artful chignon at the nape of her swanlike neck and looking as graceful as the statue of Artemis in the Louvre, his beloved wife stared out at the gardens studying her climbing roses with an empty gaze. They had bloomed too late for Chelsea but would be in time for the Hampton Court Palace flower show.

But
Davinia probably wasn’t thinking that far ahead. No, she was thinking of how she’d show off the flowers during her Wildlife Rescue Charity meeting tomorrow.

At any rate she wasn’t giving a thought
to what was before him today. For the hundredth-and-first time in what seemed like so many years, he forced himself to admit the truth.

T
he love of his life no longer cared for him.

“I still can’t believe my good fortune in acquiring such a find. Imagine. The very dagger Marc Antony used to do away with himself in
30 BC. And this morning, the museum shall have it on display.”

Again Davinia’s only response was a sip
of tea.

What
did he expect? She hadn’t taken an interest in any of his projects in years. And why should she? She had been Lady Eaton before the Earl passed. She’d been born the daughter of a duke. Why she had chosen a lowly museum curator as her second husband, he’d never know.

He was far beneath her.

“Don’t you agree that the excavation in Alexandria was a godsend? Think of it. The very instrument the Roman leader used to attempt suicide. Found right in Cleopatra’s mausoleum. It will bring the museum to the public’s attention once again.” The institute had suffered from financial difficulties in recent years. After today that would change. “Can’t you share in my enthusiasm just a little?”

She hadn’t heard a word.
Her look of sheer boredom was as painful as what Marc Antony must have felt from that dagger when he sliced open his own abdomen.

To be sure, they’d fallen in love when they
’d met. Deeply, passionately in love. But after three or four years of marriage the fervor had died away. The only explanation he could think was Davinia had come to regret having wed a mere commoner. And now with her at fifty-seven and him at sixty-two, there was little hope for rekindling any romance.

Pushing away his breakfast,
Sir Neville rose to his feet. “Well, my sweet. I must be off. Cannot be late, you know. Not today.”

He
strode across the terrazzo floor to give her a peck on the cheek.

She smile
d thinly, her first natural response to him this morning, and lifted her hands to straighten the Grand Cross pin on his lapel. His knighthood several years ago was a poor substitute for real noble blood. “Do make sure you look your best, Neville.”

His best. Of all things in life Davinia cared most about keeping up appearances.
He returned her lean smile. “Yes, dear. I’ll do that.”

And with that, he
left and headed out for the car.

The drive to London was uneventful and when the chauffeur dropped him off at the museum’s rear entrance and Sir Neville stepped out of the car, his heart swelled.

He
inhaled a deep breath of city air as he smiled up at the tall ionic columns, the Greek Revival gables and cornices, the expansive wings of the sprawling building. The London Museum of Antiquity. This place was much more of a home to him than Eaton House. That was Davinia’s domain.

The museum was his. And today would be his greatest coup
to date. The acquisition of a dagger worth millions of pounds, though its historical significance was much more important than money. The story of Antony and Cleopatra, the two star-crossed lovers, had been revived in the media and all the country was abuzz with anticipation.

This was s
omething he would be remembered for.

His dreary home life forgotten for the moment, h
e hurried up the steps with a spring in his gait.

Inside
, the first person to greet him was his Chief Collections Manager, George Eames.

The man was as much as a friend as a colleague, ever since their days at Cambridge together. He had a
sturdy frame some people would call big-boned. Taller than Sir Neville with a heartwarming rounded belly stretching the waist of his worsted wool suit, he had the deep-set eyes and heavy jowls of an old English bulldog.

Sir Neville wished he could have been with him
. He should have been here last night. But Davinia had insisted on going to the philharmonic and as usual, he’d given in.

“Everything in order, George?”

“Yes, yes. Of course. The reporters are assembled in room seventeen, the designers, the security staff, everyone is there. We’ve just been waiting for you to check everything out before the presentation.”

“
Excellent.” He followed his man down the labyrinth of corridors, down two short flights of stairs, and into the holding area of the storeroom.

There in the center of the
large expanse, among other deliveries, stood a cart covered in black velvet. Perched atop it was a small crate.

“Is that it?”
Sir Neville whispered with reverence.

Toby
Waverly, a young intern with longish, curly red hair nodded with his broad, friendly smile. “It is indeed, sir.” He looked very smart this morning in his dark vest and crimson necktie.

A woman in a severe
, dark blue skirt suit consulted her clipboard. “The plan is to roll the crate out first, then you’ll be introduced, sir.” The pleasant hint of her Indian accent under the crisp British reassured Sir Neville of the efficiency he relied on.

“Very good,
Emily.” Sir Neville gave the nod and followed his staff through the large double doors and inside the lift. When it opened, two workers rolled the cart across the Great Hall and into Room Seventeen, the Special Exhibitions room.

He waited at the door and peeked inside.

There among the hieroglyphics, the ancient coins, the busts of assorted pharaohs, and the newly constructed replication of Cleopatra’s mausoleum, stood a crowd of people.

Friends, patrons, and reporters. Everyone from the BBC to the
London News
.

Excitement coursed through his veins as
George made some introductory remarks that were far too flattering. Then George gestured to him and Sir Neville entered the room to loud applause.

The press of the crowd combined with the smell of artifacts made him feel a bit dizzy. No, it was what that crate held that was doing that. The most important
acquisition of his career. If only Davinia were here to share this feat.

“
Thank you,” he said smiling brightly. “On behalf of all of us on the museum staff, thank you all for coming today. As you know, it’s been over a year and a half since the artifact we’re receiving today was first discovered.”

Briefly, he detailed the difficulties of the excavation, the tedious negotiations with the government, the rivals who demanded the piece be
put up for auction. “But in the traditional British spirit, we have carried on and weathered those storms. Thus we stand here today about to put this historic find on display for all to see. And so, without further ado, I give you, Marc Antony’s dagger.”

Ella's Twisted Senior Year by Amy Sparling
Hot Shot by Susan Elizabeth Phillips
Little Boy by Anthony Prato
Unclaimed by Sara Humphreys
Banged Up by Jeanne St James
The Red Knight by Davies, K.T.
Another Small Kingdom by James Green
Skinny Melon and Me by Jean Ure
Prey by Andrea Speed
A Match Made in Mystery by JB Lynn