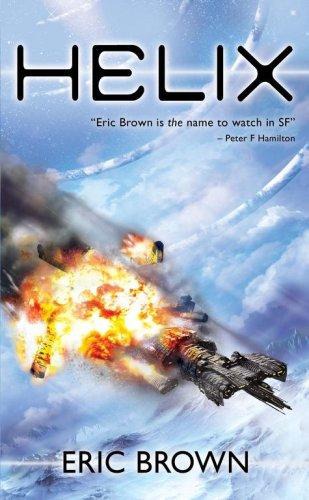 The year was
2095 and
planet Earth was dying.

That
morning Hendry was working in the garden of the starship graveyard when his
communications rig chimed. He moved back into the Mars shuttle and slumped down
before the receiver. It was Old Smith, as usual, calling from across the
straits in Tasmania to chat for a while. Smith said he’d lucked in on a radio
station beaming out of Jakarta. The big news in Europe was a terrorist strike
in Berne, at the headquarters of the European Space Organisation, with a dozen
dead and hundreds injured.

“I
thought I’d better get in touch, Joe,” Smith said. “Doesn’t your daughter—?”

Sweating,
fear lodged like an embolism in his chest, Hendry cut the call short and tried
to get through to Berne.

There
was no reply from Chrissie. He waited five minutes then tried again. Okay, so
she was out, working at the ESO headquarters. What time was it in Europe? He
tried to work it out, but fear scrambled his thoughts. Australia was eight hours
ahead of Berne, so it’d be around two in the morning in Europe.

Chrissie
wouldn’t be at work, then. She’d be sleeping, he told himself, and he didn’t
know whether to feel relief at the fact or renewed fear at the thought that his
call should have awoken her.

He
called her code again, and five minutes later gave up and left the shuttle.

He
walked through the starship graveyard to the edge of the sea. Light-headed,
trying not to dwell on Chrissie’s lack of response, he looked over his garden,
row upon row of peas and beans and potato plants, their lush foliage
incongruous amid the rearing shapes of a dozen derelict shuttles and
decommissioned tugs. Despite their dilapidated and broken-backed condition,
there was something almost proud and defiant about these ships. They spoke of a
time when humankind had not been afraid to explore, when the planet could
sustain the luxury of space flight, before the cutbacks and the withdrawal of
the moon and Mars colonies.

He
passed between the two towering solid fuel boosters that formed the entrance to
the graveyard, paused and took in the scene before him. The sea lapped
listlessly at the scorching sands of the beach, but he saw only Chrissie’s face
in his mind’s eye.

Thirty
years ago Hendry had lived with his parents in the Melbourne suburb of
Edithvale, now submerged twenty miles out to sea. This was as close to the
stamping ground of his youth as he had been able to get, and the fact had
disturbed him on his return in ‘90. He had known, intellectually, that
Australia like every other landmass had been pared down little by little and
reshaped by the creeping tides, but that the ocean had swallowed his childhood
home he found inconceivable and shocking.

So
he’d set up a base in the old starship graveyard, and started a garden, along
with a dozen other like-minded, lost souls who over the following years had
either died or moved away, driven by the encroaching sea or the increasing
heat. Hendry had stayed on, despite the pleas from Chrissie to join her in
Europe where civilisation was making a last stand against the worsening
elements.

He
had always resisted her offers of an apartment in Berne. He had his own life
here, such as it was, and he could not face the prospect of living an
artificial existence of pampered excess in some Swiss fortress enclave.

Now
he wanted nothing more than to be with her.

He
walked along the shoreline to the jetty, a tumbledown extension of rank lumber,
which he had helped erect five years ago. He negotiated the treacherous,
sun-warped boards, stepping over gaping holes, and came to the system of
pulleys he’d rigged up last year. He hauled, and far below a ripped square of
netting emerged from the sea bearing its usual meagre haul of small fish. He
transferred the catch to a bucket and carefully retreated to the shore.

He
moved along to the desalination plant, which was a grand name for the pile of
shuddering junk that O’Grady had patched together two years ago, a parting gift
before he bailed out and escaped north.

The
plant was powered by a shield array of solar panels, coruscating blindingly in
the morning sun. Beneath them the rusting pipes and engines throbbed, taking
salt from the seawater and pumping the resulting clear, but foul-tasting, water
back up the beach to the irrigation system that helped keep Hendry’s vegetable
garden alive. There were a couple of litres left over every day for Hendry’s
consumption, which he drank in the form of dandelion tea.

He
checked the plant half-heartedly, going over the list of details O’Grady had
warned him about before his departure. O’Grady had been the community’s
engineer, and his loss had been a grave blow—one from which they had never
recovered. Stella had died not long after and her husband, Greg, had
reluctantly left Hendry and sailed east in a home-made ketch. Hendry often
wondered what had become of the meteorologist. Had he ever made it to New
Zealand, and the mountainous land of promise they had heard myths about on
infrequent radio broadcasts from Dunedin?

The
desalination plant was doing fine, a testament to O’Grady’s engineering skills.
Hendry turned and walked back up the beach. He’d try getting through to
Chrissie again now, and if he did so he’d celebrate with grilled fish and salad
for lunch.

He
hurried through the booster gateposts and was approaching the shuttle when he
heard the chime of the incoming call. He arrived breathless and dived at the
rig. “Hendry here. Do you read?”

It
took a second for the picture on the screen to clear, and even then it was
furred with atmospheric interference.

A
smiling face looked out at him, and Hendry shot forward on the couch, relief
flooding through him like a drug. “Chrissie! For Chrissake, I thought... The
bomb—”

“You
okay?” he asked, inanely. He realised that his eyes were filling with tears.

“You’re
kidding, right? Why on earth...?” If she were in Sydney, then the chances were
that she’d be down to see him soon.

“I
heard about the bomb,” he said, “tried to get through to you. You can’t imagine
how worried I was when you didn’t answer.”

He
sat back in the chair and laughed.

She
said, “It was the Fujiyama Green Brigade. They claimed responsibility for the
bombing.” She looked away uneasily, perhaps wondering if she should have
mentioned the Brigade for fear of opening old wounds.

Chrissie
smiled and changed the subject. “You look a sight, Dad!”

“I
do?” He looked down at himself. He was wearing sawn-off denims, and an old
shirt, through which his pot belly protruded. On his head an ancient straw hat
protected him from the sun. “Well, not many people around here now, so I don’t
dress for dinner.”

He
thought about lying, but decided against it. “Exactly one.”

Her
round face, slanted eyes, registered shock. “You’re all alone?”

He
thought she was about to suggest, again, that he join her in Berne. Her
calculating look was that obvious. To her credit she didn’t even try, this
time.

She
leaned forward. The picture broke up briefly, then re-formed. “You remember how
we used to talk about the future of humankind?”

He
smiled. He had brought her up alone, after her mother had walked out. Chrissie
had gone through a phase in her teens when the state of the world, and the
future of humanity, became her overriding concern. She’d corner him and talk
for hours on end about where the planet was going.

“And
you were always the optimist, Dad.”

“And
you the teenage pessimist.”

She
laughed. “And now? You still optimistic?”

Hendry
smiled. “Well... it’s hard to be optimistic these days, you know?” He stopped there.
He didn’t want to sound like the Jeremiahs of his youth: Chrissie was still
young; the future was hers, what little there was left of it.

“Dad,”
she said, changing tack, “do you think humanity carries within it the seed of
its own destruction? I mean, was it destined to end like this? Are we so
corrupt on the personal level that that is inevitably mirrored in society at
large?”

“What
have you been reading, Chrissie?”

His
daughter worked as a botanist, battling to save flora endangered by the harsh
climatic conditions. As she’d emerged from her teenage angst, she’d turned into
a happy young woman who, despite all the evidence around her, always argued
that there was hope.

“Okay,
okay,” he smiled and thought about it, then shrugged. “That’s a hard one,
Chrissie. But in general I’d say no, nothing is inevitable. Many people are
corrupt, but many are not. Some societies down the ages have prospered, and
would have continued to do so without despoiling the Earth, if not for other
societies who gained pre-eminence.” He shrugged. “Does that make disaster
inevitable? It depends a lot on luck, the right breaks.” He decided he was
waffling, and shut up.

“What
you’re saying is that if we had it all over again, Dad, then with luck it might
work out differently?”

He
nodded, wondering where this was leading. “Yes, I guess so.”

She
smiled, and the smile sent a terrible pain through him, for there was only one
world, and it was dying, along with everyone upon it, even his beautiful
twenty-five year-old daughter.

“Thanks,
Dad. That’s what I think, too.” She leaned forward, so that her face almost
filled the screen. “Something’s come up at this end. It’s all top secret,
hush-hush. I can’t breathe a word of it over the link. But we’re flying down to
Victoria for more training, and I’ve wangled an hour off to see you. I’ll be
there around noon, okay?”

He
was stunned. “Can’t wait, Chrissie.”

“Love
you,” she said, and her image vanished as she reached out and cut the
connection.

Hendry
went about in a daze for the rest of the day. He’d last seen Chrissie two years
ago, when she’d managed the arduous trip and stayed with him for a fortnight.
Back then the community had numbered ten, and had a vitality about it, though
he’d seen how shocked she was at his living conditions.

Since
then they’d communicated every month or so, she trying to get him to relocate
to Berne, he resisting, but later wondering why.

Maybe
it was because he didn’t want to become emotionally reliant on Chrissie. He’d
been down that road fifteen years ago with Chrissie’s mother, Su, and then
she’d walked out, left him to join a commune of neo-fascist Greens bent on the
systematic assassination of industrialists.

It
had taken a long time to get over that, and a long time to come to terms with
being alone again when, five years ago, Chrissie left their home in Paris to
attend university in Berne. Hendry had thought of going with her then, but
something had drawn him south, to the land of his birth.

Later
he went out into the garden, watched the sun go down and then began hoeing
between the peas. He normally slipped into a mindless fugue while working in
the garden, but this time his head was full of Chrissie’s optimism. Something
had come up, she’d said, something hush-hush. She’d wanted to know if humanity
carried the seeds of their destruction within them... And her mention of a new
beginning?

He
wondered if, like her mother, she’d been lured into some fanatical cult
promising redemption.

But
she would tell him all about it tomorrow. That was more than Su had ever done.
She’d walked out after dropping Chrissie off at school one morning, left him a
note saying that she’d had enough of being married to a spacer and was leaving.