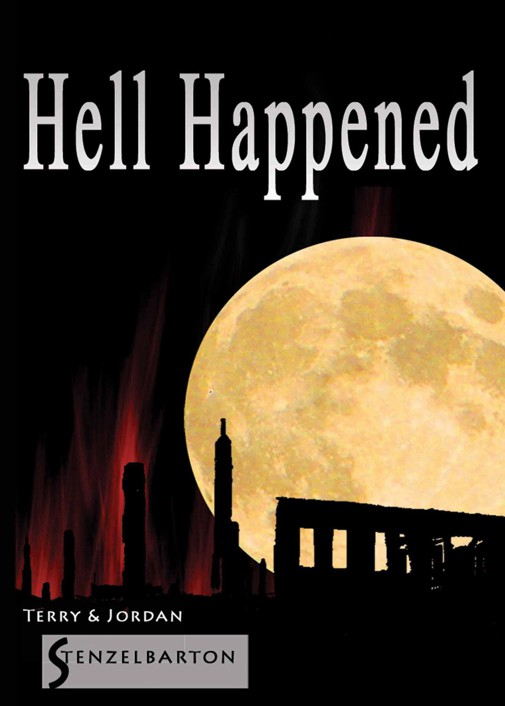 Tia saw the men raise their weapons. She was a

very
bright woman and knew in an instant why they

were
aiming in her direction. “Oh shit,” she said to no

one
and looked in the rear view mirror. The zombies

had
just cleared the hole she’d made and were coming

straight
at her and the men who were on her crew.

“Like hell, you sons of bitches,” she hollered and

threw
the Escalade into reverse. The little woman,

whose
feet barely reached the floor, pulled on the

steering
wheel and stomped on the accelerator again.

The back window was shattered by the head of one

the
rear bumper. She felt the bodies being crushed

beneath
her truck, and shredded by four spinning tires

as
she gunned the SUV’s 400-horse
powerplant
.

She briefly recalled how it felt when she drove her

The Cadillac felt the same way driving over zombies.

T
he idea for this novel came after a conversation I had with a fellow author following the sermon at the church we attend. We were talking about Star Trek novels and other ideas when Skip mentioned zombies. I didn’t give it much thought until I was on my way home because I’d never written a zombie novel.

I say exploded when I tell the story of where I got the idea, but I didn’t have characters or an environment in which to put them.  There were plot holes you could drive dump trucks through, no characters that needed redemption, no decent antagonist, no drama at all.

It was a narrative with no life. If it had been a horse, it would have been dog food by Monday morning.

Enter my son, Jordan. He and I usually spend Sunday afternoons foraging for food at the local stores, eating lunch at the ethnic restaurant and playing tennis with friends.

When I explained what I was thinking, he was more than willing to talk about zombies. What bothers him about typical zombies is they’re dead. It was his idea to make the zombies included in the book not dead, but zombie-like. He and I talked for hours hammering out their attributes.

Jordan also listened to the story develop over the three weeks it took to write. He changed dialog and personalities of the people about who I wrote, changed the obstacles they faced to add realism and added the proper emotional responses.

But what Jordan did more for this book, and either of the other two I’ve written, was he pushed me when I locked up. I could stare at the words for hours and not see where to take the story. I’d read what I’d written to him and stop where I was stuck. From there, he’d bounce ideas off me until we came up with the story you’re about to read.

Were it not for Jordan, it would not be the story it is.

Without my editor Kristen, however, this book wouldn’t be as readable as it is. She spent a fortnight fixing my screw ups and poor grammar and she did it with a smile. I wish I’d used her as an editor on my other books and they might have done better. She is absolutely the very best.

Then there’s Tia, the real person, not the Tia in the book. They are nothing alike, but I like the name so used it. She gave me the encouragement when I was tired and motivation when I slacked off. She’s been my best friend for years and will get the second copy the publisher gives me.

Shout outs have to absolutely go to Russ, Cheryl, Kayla and Lisa, my dear friends who’ve been there for me through this ride. They heard I was again in my writing mode and cheered me on like the good people they are. To paraphrase Pastor Joel: if you want to know who I am, look at my friends. I’d say my friends are the best.

Last, but far from least, I have to say thanks to my Life Group, from whom I have freely stolen first names, not their personalities, just the names, for characters in the book. They put up with my attitude when I was tired, my anger when I was mad, and regularly overlook my failures.

“D
ammit
all to hell,” Jerry cursed as he closed the main doors to his underground shelter with a slam. “What in God’s name was Jeff thinking?” He slammed both bolts to their locked position, slapped his palm flat against the frame, then turned around and leaned against the heavy oak doors.

Jerry had not been having a good day and it was not looking to be a good night either.

Kellie knew it was not going to be a good night. She was grateful Jerry had not killed her when she and her little dog Molly had stumbled upon his shelter. He almost did when she came walking through his back field just before sunset three weeks earlier with her story of escaping a band of violent vigilantes. She’d come to know Jerry more by what he didn’t say than what he expressed in words. She knew when he was angry he would and could use cursing as his outlet for frustration.

She knew he was pissed right now because she seldom heard him swear. Jerry read the bible regularly and he was a kind and gentle man of simple means and simple words and simple pleasures. He wasn’t an angry man, so she just listened to him while he took off his work boots and jacket and muttered his displeasure at the turn of events. At 40 she’d had experience with violent men, including her ex-husband, and Jerry wasn’t the type to be demonstrative, but when it came to cursing in frustration and anger, he could string together a line that was both entertaining and instructive.

Randy, who was used to his dad’s occasional outbursts, also knew it was not going to be a good night. He loved his dad and knew him better than anyone alive. He knew his dad was angry because someone had done something really stupid if he was muttering like he was.

Randy knew it was best if he just stood quietly as his dad went on his little tirade. He made mental notes because his dad was really good at insulting people, and he might need some of the curses later.

Monica, the no-longer grossly overweight teen who had grown up two towns over, put her head in her hands and started to cry. She was
,
it turned out, a bit of a drama queen, as everyone in the shelter knew by now. She also knew Jerry was pissed.

Since he wasn’t pissed at her, she needed to do something to get their attention back on her so she started crying.

No one cared. They had grown used to her crying.

Jerry and Randy had found Monica on their first sojourn away from their shelter and into the small city of Moody. She was eating Little Debbie snack cakes in one of the few quick-stop gas stations that hadn’t been totally sacked and burned. How she’d survived on her own for so long was a surprise, but sometimes people just got lucky.

Jerry and his soft heart took her in, and she had gone from an obese, lazy whiner to a stout drama queen over the past three weeks. She hated her life, but Jerry was firm about rationing and insisted everyone try to eat healthy. The labor needed on the farm to keep everyone fed and safe was real work and if she wanted to keep being a part of it, she had to pitch in as well. She didn’t like it, but there was no alternative. Jerry, the owner of the farm and the shelter in which she was living was fair, but he didn’t enable her whining and laziness. Despite herself, she was becoming less of a bother and more of an asset, except for the need for attention.

Eddie, Randy’s high-school friend who had survived the wave of death and collapse of civilization with nothing more than
a
“
m’eh
” attitude listened to Jerry’s rant in silence. He knew, on very rare occasions, Jerry could spout a string of curses that left women crying and small children afraid of the dark. He sat and watched the leader of their group with his usual blank stare.

Truth be told, Eddie was from a younger generation who figured some type of collapse of civilization would happen, so was not surprised that it did. The speed at which came, from start to the death of more than 99 percent of the human population of earth was less than two months. His mother had been one of the first to die and his dad had never been around, which left him not as shell-shocked as most people. His mother had been a whore who slept with anyone who would pay her some attention and he never really liked her although he did love his mom and would miss her.

Eddie liked Jerry, Randy’s dad, and had spent a lot of time with them rather than his mother through high school and Jerry let him work on the farm to earn money.

He didn’t care one way or the other if Jeff, the man about whom Jerry was currently cursing, never came back because the brutish former wrench head was a foul-mouthed bully who took every opportunity he could to talk trash about Jerry and the rest of the people who had taken refuge in Jerry’s shelter.

Eddie didn’t mind thinking that Jeff was being snacked on by some lucky zombies, or attacked by the vigilantes Kellie had told them about, but Eddie had made friends with
Tony,
the guy Jeff took on the scouting trip. Tony was a good kid and he and Randy made friends with the guy who was just a year younger, but a lot more adventuresome.

In the days before being found, Jeff and Tony had lost a third person in their group to vigilantes so there had been some shared adversity between the two.

The Tall Man by Chloe Hooper
High-Society Seduction by Maxine Sullivan
Lovers and Liars by Sally Beauman
Christmas at the Beach Cafe by Lucy Diamond
Sinful Confessions by Samantha Holt
The Handmaid and the Carpenter by Elizabeth Berg
The Bride Wore Crimson and Other Stories by Bryan Woolley
The Lush Life (Samantha Jamison Mystery Book 8) by Edelheit, Peggy A.
Passion's Exile by Glynnis Campbell
Lovestruck Summer by Melissa Walker