Read Hell in the Pacific: A Marine Rifleman's Journey From Guadalcanal to Peleliu Online

Hell in the Pacific: A Marine Rifleman's Journey From Guadalcanal to Peleliu 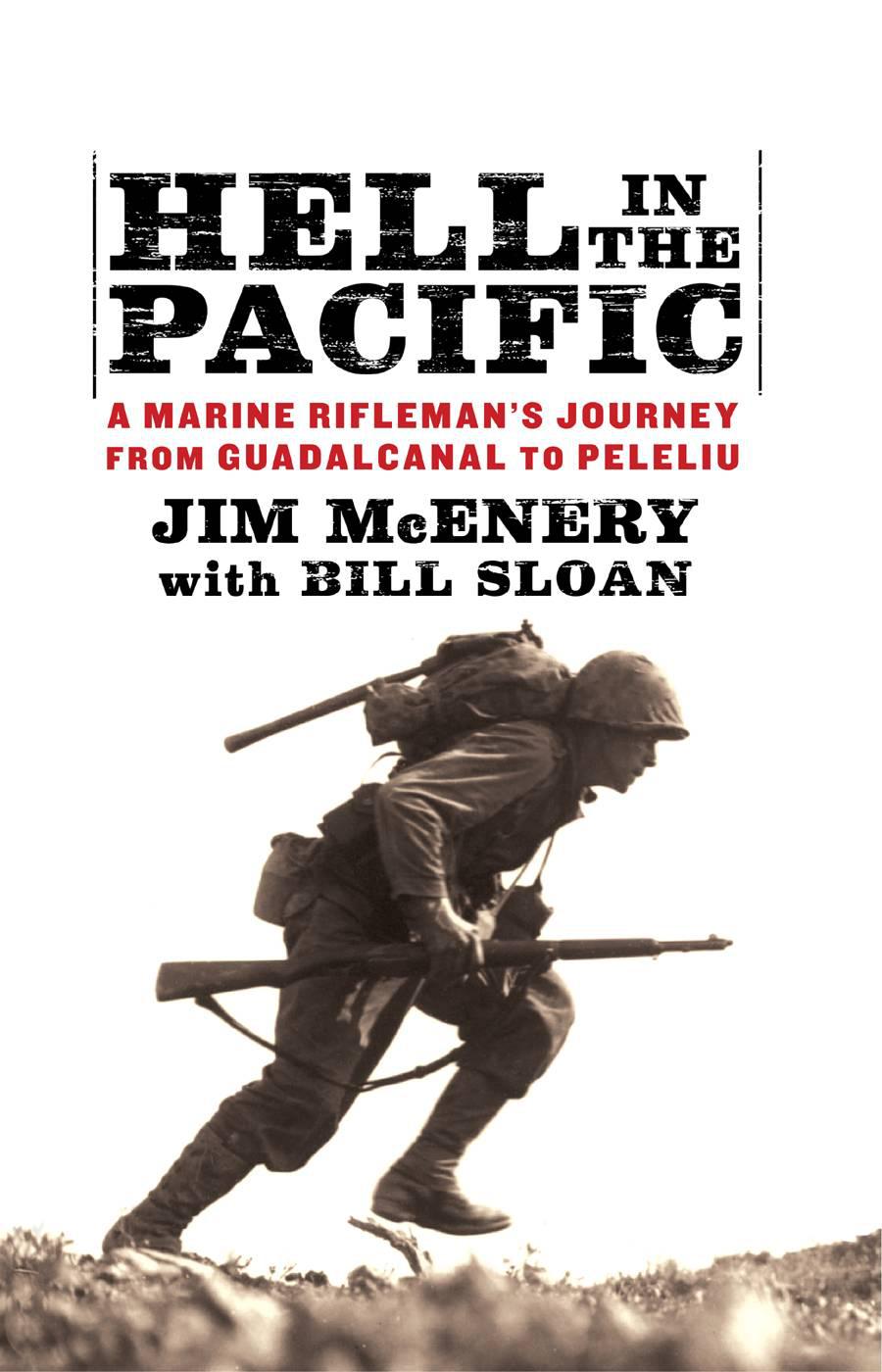 A MARINE RIFLEMAN’S VIVID, BRUTALLY CANDID
MEMOIR OF LIFE AND DEATH ON THE
FRONT LINES OF WORLD WAR II IN THE PACIFIC

In a letter to Jim McEnery penned in 1981, the late Eugene Sledge, author of
With the Old Breed at Peleliu and Okinawa,
wrote: “With profound admiration for one of the best Marines and bravest NCOs I ever saw under fire. It was guys like you, Jim, that acted as an example to some of us ‘boots’ and kept us going when things got rough.”

“Sloan is a master of that narrative genre at least as old as the
Iliad,
the combat narrative.”

In what may be the last memoir to be published by a living veteran of the pivotal invasion of Guadalcanal, which occurred almost seventy years ago, Marine Jim McEnery has teamed up with author Bill Sloan to create an unforgettable chronicle of heroism and horror.

McENERY’S RIFLE COMPANY
—the legendary K/3/5 of the First Marine Division, made famous by the HBO miniseries
The Pacific
—fought in some of the most ferocious battles of the war. In searing detail, the author takes us back to Guadalcanal, where American forces first turned the tide against the Japanese; Cape Gloucester, where 1,300 Marines were killed or wounded; and bloody Peleliu, where McEnery assumed command of the company and helped hasten the final defeat of the Japanese garrison after weeks of torturous cave-to-cave fighting.

McEnery’s story is a no-holds-barred, grunt’s-eye view of the sacrifices, suffering, and raw courage of the men in the foxholes, locked in mortal combat with an implacable enemy sworn to fight to the death. From bayonet charges and hand-to-hand combat to midnight banzai attacks and the loss of close buddies, the rifle squad leader spares no details, chronicling his odyssey from boot camp through twenty-eight months of hellish combat until his eventual return home. He has given us an unforgettable portrait of men at war.

JIM McENERY,
born and raised in Brooklyn, New York, enlisted in the Marines in 1940 and fought in three major campaigns in the Pacific. He lives in Ocala, Florida, with his wife, Gertrude.

BILL SLOAN
is the acclaimed author of more than a dozen books, including
Undefeated, Brotherhood of Heroes,
and
The Ultimate Battle.
He lives in Dallas, Texas.

• THE SOURCE FOR READING GROUPS •

The Darkest Summer: Pusan and Inchon 1950—
The Battles That Saved South Korea—
and the Marines—from Extinction

Brotherhood of Heroes: The Marines at Peleliu, 1944—
The Bloodiest Battle of the Pacific War

Given Up for Dead: America’s Heroic Stand at Wake Island

Elvis, Hank, and Me: Making Musical History
on the Louisiana Hayride
(with Horace Logan)

The Other Assassin
(fiction)

Thank you for purchasing this Simon & Schuster eBook.

Sign up for our newsletter and receive special offers, access to bonus content, and info on the latest new releases and other great eBooks from Simon & Schuster.

Hell in the Pacific : a Marine rifleman’s journey from Guadalcanal to Peleliu / by Jim McEnery with Bill Sloan.—First Simon & Schuster hardcover edition.