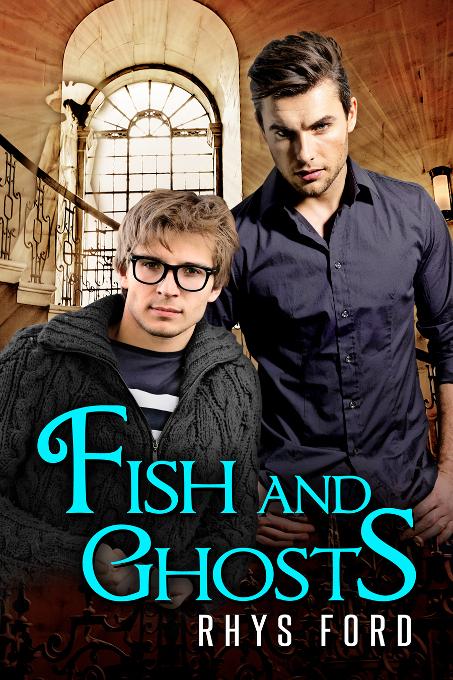 This book is for Jenn. She really, really loves this book and licked it first. So it’s hers. Kind of like that last chocolate donut.

As always, any book with my name on it goes to the Five; Jenn, Penn, Lea, and Tamm—as well as my beloved younger sisters, Ree, Ren, and Lisa. Couldn’t have gotten here from there without you.

To the Dreamspinner staff, I send you all a huge thank-you—Elizabeth North, Lynn, Julianne, Mara, Ginnifer, Grace, Julili, lyric, and everyone else there. Thank you. Thank you. With cookies too.

Lastly, to the things that go bump in the night. Thank you for keeping me company when I couldn’t sleep.

“S
MELL
THAT
?”
Wolf Kincaid paused at a narrow doorway, his broad shoulders wedged up against the creaking wooden frame. “Effervescent in nature, a whiff of dirt.”

He was speaking of the wispy mist blanketing the battered floor, its swirls created by the uneven knotty planks as much as by the two men walking down the hall. Around Wolf, the plantation house creaked with noise and echoes, tidbits of sound reaching back to tantalize the men sent to document its haunted history.

Built during the early days of Louisiana’s settlement, Willow Hills Plantation was once a hub of Southern activity, providing the surrounding area with food and, during bleaker times, an avenue for escaped slaves to begin a new life in the North. Stripped down nearly to its frame by its aging tenants, Willow Hills had been resurrected from its near death as a bed-and-breakfast. Positioned as the last stop of an Underground Railroad tour, the plantation soon earned a reputation of being a great place to eat as well as a home to restless spirits.

It was the latter part of its reputation that Wolf Kincaid came to tear apart.

“Hey, Wolf, want me to get an air sample?” Matt peeked out from behind his shoulder-mount camera, its illuminated trim splashing up enough of a glow for them to see in the plantation’s dark halls. “Or is it an ambient leak from outside? Swamp gas?”

No, he wasn’t going to feel bad about taking out the Willow Hills ghosts.

And if he had a chance, he’d go back in time and kick the shit out of its builders too. At a little over six feet, he should have had more space to walk around in the upper floors’ hallways. Instead, he felt like Alice after she had too many frosted cakes. His elbows hurt from banging into the walls, and the household staff wouldn’t have to dust for cobwebs because Wolf was pretty sure he’d walked through all of the ones in the attic storerooms. If he’d thought ahead, he could have taken a feather duster, done the job right, and charged the Willows for a deep cleaning as well as a spectral investigation.

Another step into yet another tiny room in the warren of servants’ quarters and Wolf found himself face-to-face with an apparition.

As apparitions went, it was fairly strong. White pallor, groaning black mouth, and empty eye sockets, with trails of ebony bleeding out under the spirit’s surrounding mottled skin. Her features were difficult to see, but the jut of her breasts straining against the thin lawn shirt she wore left Wolf with no doubt that he was staring through a woman.

Then she opened her mouth and a horrendous shriek rattled his eardrums and set fire to Wolf’s nerves.

Somewhere behind him, Matt screamed, and from the thudding sounds that soon followed, Wolf guessed he’d toppled over, probably taking the camera with him. The woman flickered in and out, a blue-white veil of features and fabric. Without warning, she rushed them, advancing on Wolf with her hands stretched out in front of her like talons.

He ducked. It was instinct born of human nature, and he cursed himself for it nearly as soon as he curled his shoulders away from the ghost. An icy chill hit him, whooshing over his face and arms. Then another struck, a stronger blast of air, cold enough to peel goose bumps up from his skin. The screaming continued, a murderous shriek echoed at a lower volume by his cameraman.

Something wet struck his cheek, and Wolf turned, looking up at the angled ceiling, where clotting strands of something dark and viscous dripped slowly down on top of them. It smelled rank and of curdled metal. Dabbing at a moist spot on his cheek, Wolf tasted the thick fluid, recoiling at its sourness when it spread over his tongue.

“Blood,” he murmured, holding up his wet finger for Matt to see. “Are you recording this?”

“I’m fucking freezing my nuts off, and I think I swallowed my tongue.” The young man struggled to get to his feet, tugging his ill-fitting Hellsinger Investigations T-shirt down over his slightly rounded belly. “Did you fucking see that? Shit, tell me you got readings on that.”

He left the younger man behind, edging past him, then launching into a full run down the tight staircase leading to the kitchens. His elbows took a beating. Obviously, his body had picked through his genetic soup and decided it preferred the enormous bulk of his Scottish ancestors above everything else and poured out his muscles and bones with a maniacal, enthusiastic glee.

While height and brawn were good in a fight, it made for shitty going while trying to run down a spiral staircase meant for tiny seventeenth-century women.

Somewhere behind him, Matt clomped along. He’d hired the young man for his filming and technical skills, not for going through an obstacle course, but Wolf didn’t really care. Most of the time, Matt could keep up. This time, however, it wasn’t as important as Wolf getting down to where he thought the apparition originated.

Because he needed to put an end to the haunting.

And Wolf Kincaid was famous for having those kinds of moments.

Booming thumps echoed in the rear of the house, percussive rounds loud enough to shatter the eerie silence that settled down after the ghost’s shrieking. The walls around Wolf shook, and he ducked out of the way as a framed sampler fell off its hanger as he rounded the stairwell’s landing.

Behind him, Matt followed, stomping and cursing at the tight fit. The young man would have a hard time of it. The camera was too big, too bulky to make the tight turns quickly if Matt insisted on keeping it fixed to his shoulder to film. Which was what he’d certainly do. It was what Wolf paid him to do, even as he was tumbling ass over teakettle down the stairs behind his boss.

The staircase let out into the servants’ kitchen, a dank-smelling, closed-in room that, despite the staff’s best efforts, seemed to cling to its grimy lower-class roots. Wolf slipped on a tile, his sneaker catching on a thick line of grout, the sandy mixture providing some traction against the overpolished ceramic floor.

Ahead, the noises grew louder, more ear-shearing rattles and booms. More shrieks followed, echoing first upstairs, then suddenly snapping to the bottom floor, louder and more profane than the ghostly banshee moans. Rounding the corner, Wolf found himself in a room directly beneath the staircase, a long, rectangular space the plantation used for storage.

A stein flew past Wolf’s head, nearly clocking him on the temple. The heavy ceramic shattered against a wall behind him, and he felt a shard cut his cheek, the brief sting deepening into something heavy and wet on his skin. Another stein followed, then a plate wide enough to host a good-sized turkey.

“Fuck!” Matt exploded into a round of curses. From the sounds coming from behind him, Wolf guessed a piece of flying crockery had found its target in the cameraman or his equipment. “Poltergeists now?”

Wolf fumbled to find a light switch. His fingers found a bank of sliders on the wall next to the door, and the storeroom burst into view, two banks of overhead fluorescents throwing everything into a stark contrast of bright and shadow. Fully drenched in light, two women in period costume froze in place, one caught in the middle of throwing a metal steaming tray while the other’s hands were tangled in audio-visual feed lines. The cables disappeared through a small hole in the ceiling tiles, and nearby, a tripod lay on its side on what looked like a camera case. Both women were bleached white from heavy layers of makeup, their eyes hollow and bleak from a coating of dense theatrical kohl.

“T
HEY
WERE
pretending to be ghosts so people would go stay there?” Nahryn placed a steaming mug of black coffee in front of Wolf and settled into an empty wing chair next to his. “Why would someone do that?”

Pilgrimage by Zenna Henderson
Plus None 2 by Emily Hemmer
The Touch by Randall Wallace
Superlovin' by Vivi Andrews
Tex's Revenge: Military Discipline, Book Two by Loki Renard
Vesik 04 - This Broken World by Eric Asher
The Meltdown of a Banker's Wife by Gill Davy-Bowker
Outlaw Hell by Len Levinson
Sweeping Up Glass by Carolyn Wall
Instant Gratification by Jill Shalvis