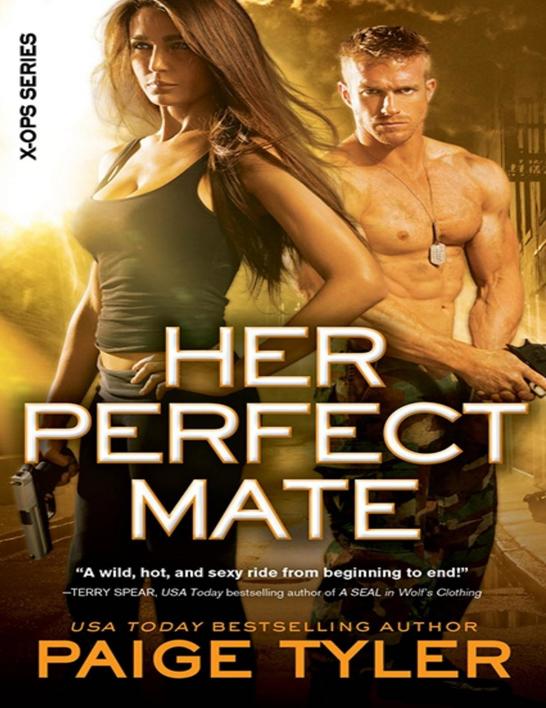 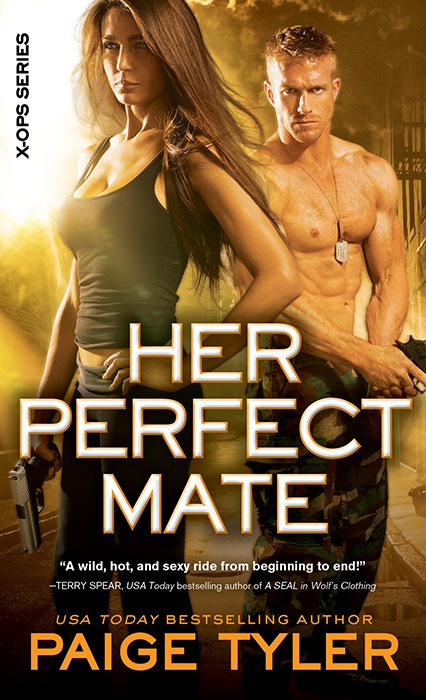 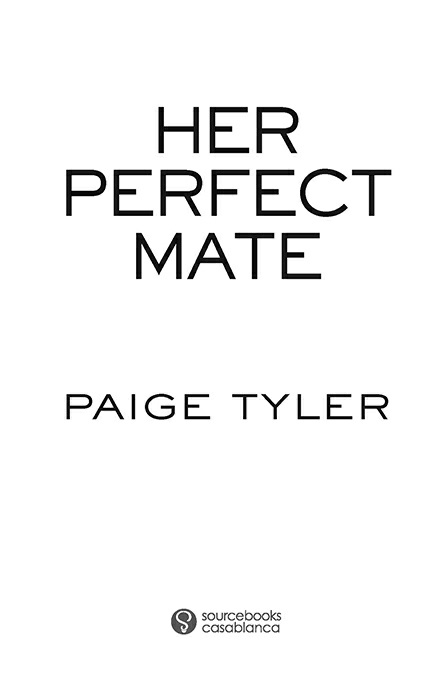 All rights reserved. No part of this book may be reproduced in any form or by any electronic or

quotations embodied in critical articles or reviews—without permission in writing from its publisher,

The characters and events portrayed in this book are fictitious or are used fictitiously. Any similarity to

real persons, living or dead, is purely coincidental and not intended by the author.

With special thanks to my extremely patient and understanding husband. Without your help and support, I

couldn’t have pursued my dream job of becoming a writer. You’re my sounding board, my idea man, my

critique partner, and the absolute best research assistant any girl could ask for.

Ivy Halliwell studied the dilapidated warehouses across the street, her eyes narrowing in the darkness.

Casualties of a decades-long war, the buildings were mere burned-out husks of their former glory. Not to

mention the perfect setting for an ambush. She scanned the broken windows and overgrown landscape.

There wasn’t anyone in sight, but that didn’t mean someone wasn’t hiding somewhere. She sniffed the air,

trying to pick up a scent, but all she could smell was the sickening exhaust from the crappy rental car’s

She glanced at her partner. “I know you don’t care what I think, but something’s off about this.”

Dave snorted. “Why? Because your Spidey senses are tingling again?”

God, she was so sick of his attitude.

“I’m not asking you to trust my instincts because I know you won’t. Going in there without checking

the place out first is beyond stupid. It’s dangerous.”

He pulled into an alley between two abandoned buildings, put the small car in park, and opened the

door. “That’s your professional opinion, based on years of field experience, right?”

She got out and followed him to the back of the car. “It’s a good idea to be a little cautious on this one,

Dave checked the magazine in his .40-caliber automatic, then shoved the weapon back in its holster. “If

I want an opinion on what kind of cat food to buy for my ex-wife’s tabby, I’ll ask a freak like you. Until

then, do us both a favor and keep your mouth shut.”

Ivy clenched her jaw to keep from growling. Literally. She was so close to losing her cool and ripping

her partner a new one. But a rat-infested street in the middle of a dangerous crime-ridden, war-torn country

wasn’t the place to do it, no matter how much Dave might be asking for it. When they got stateside, though,

she was done with this sham of a partnership. She was going to her boss and requesting a new partner

because this one sure as hell wasn’t working out. Teaming her up with a chauvinistic former jarhead like

Dave Graner had been a disaster from the start.

But first, they had to make it out of Grozny alive. A couple hours ago, that didn’t seem like it was going

to be a problem. Now, Ivy wasn’t so sure. Something was not right about this op.

headset. “Stay with the car.”

“Don’t be ridiculous. I’m coming with you.”

He gave her a hard look as he hooked the headset over his ear and adjusted the mic. “Stay here. That’s

Damn him! She was his partner, not his subordinate.

She stood and watched Dave jog toward the warehouses, then grabbed the other communication

headset, hooked it over her ear, and turned it on.

“Dave, the plan was to watch the guy from a distance, then pick up the bag after he makes the drop.”

She heard him swear under his breath. “If the Russian can change the plan, so can I.”

Typical Dave. Always trying to prove he was in charge. “Let me at least come in and cover you.”

“Stay with the damn car like I told you to.”

Ivy bit her tongue. The moron was going to get himself killed. She shouldn’t care what happened to

him, but she didn’t want him getting hurt. And every instinct told her that would happen if she didn’t stop

him from going in those warehouses alone.

How the hell was she supposed to do that?

“Dammit, just shut the hell up. I’m too busy right now to listen to your shit. I have eyes on our guy and

the package. I’m moving toward the drop point now.”

body’s internal alarm system. The hell with standing around. Let Dave report her for insubordination when

they got back to DC if he wanted to. She wasn’t going to be the one to let that jerk get killed. Pulling the

9mm from the holster on her hip, she ran toward the dilapidated warehouses.

building had collapsed at some point in the past. The darkness wasn’t a problem for Ivy. Her eyesight

automatically adjusted to the lack of light. Within seconds, the dark corners and shadows disappeared as if

someone had flicked on a lamp, except without all the distortion and depth-perception problems that came

with night vision goggles. Maybe part of the reason Dave disliked her so much was because she never

She didn’t use her heightened night vision to track Dave, though. She used his scent. It was strong on

the air, too. Adrenaline mixed with fear did that.

“I’ll be at your location in less than thirty seconds. Don’t do anything stupid until I get there.”

“Do me a favor. Go. Fuck. Yourself,” he ground out. The radio clicked off.

“Dammit!” Ivy let out a growl and ran faster.

In front of her, she heard the
pop, pop, pop
of a small-caliber gun.

“Dave!” she shouted into her headset. “Dave, answer me!”

Buildings blurred as she ran past them. She should slow down, check corners and alleys. She could be

running right into an ambush.

But she didn’t slow. She couldn’t.

The scent of blood hit her hard as she rounded the corner of a large stone building, and she immediately

froze. Less than ten feet away, Dave and another man—probably the Russian—were lying on the ground,

She started toward them but stopped when she caught movement out of the corner of her eye. Three

men—she could tell they were men from their scent—were nonchalantly walking away from the bodies.

One of them had a briefcase in his hand. Another held Dave’s NVGs. She darted after them, 9mm aimed

and ready to fire, but all three of them spun around at the same time and raised their weapons.

There was nowhere to take cover, and Ivy was moving too fast to even try. Instead, she opted for

surprise, leaping into the air as she swiftly closed the distance between her and the men. Their eyes widened

as she went airborne. Their first salvo of rounds passed harmlessly underneath her, and while she was still

in the air, she took out the most dangerous target first—the guy with the MP5 submachine gun. Two shots

to the chest silenced his weapon and dropped him where he stood, leaving her free to turn her gun on a

second target—the man with the .45. She put two rounds in him and he flew backward.

Taking out those men left her exposed to the last shooter—the one with the small-caliber pistol. He

didn’t waste any time firing at her. She hit the ground and rolled, bullets zipping past her head.

The man redirected his aim to shoot her in the head. She knocked the pistol out of his grip with her free

hand and leveled her gun at him. Before she could shoot, the bastard caught her weapon hand in both of

his, trying to wrestle the pistol away from her.

Ivy set the animal inside free, letting out the growl that had been building low in her throat ever since

she found her partner lying on the floor in a pool of blood. She didn’t know for sure if this was the bastard

who had shot Dave, and right now, she didn’t care.

Releasing her hold on the gun, she let her fingernails extend until they became long, sharp, curved

claws. The man stared at her, his eyes wide. With a hiss, she darted her right hand up and sliced open his

He hit the floor, the gun falling from his useless hands.

Ivy rose from her crouch, her breathing ragged. All told, the fight had lasted less than fifteen seconds. If

things had gone the way they were supposed to, she and Dave would have been in and out in that same

Taking a deep breath, she retracted her claws, then turned and ran to Dave’s side.

She carefully rolled him onto his back. He’d been shot multiple times in the chest, then another in the

head. He’d never even gotten his gun out of his holster. Whatever first aid she could have offered was too

Pure Heat by M. L. Buchman
Defending My Mobster (BWWM Romance) by Tasha Jones, Interracial Love
Cutting Up The Competition (Horror High #2) by Carissa Ann Lynch
Either the Beginning or the End of the World by Terry Farish
Sal Gabrini 4: I'll Take You There (The Gabrini Men Series Book 7) by Mallory Monroe
After Work Excess by Davies, Samantha
From Where I Watch You by Shannon Grogan
Death Comes to the Ballets Russes by David Dickinson
The Deception of Love by Kimberly, Kellz
The Horseman's Bride by Elizabeth Lane