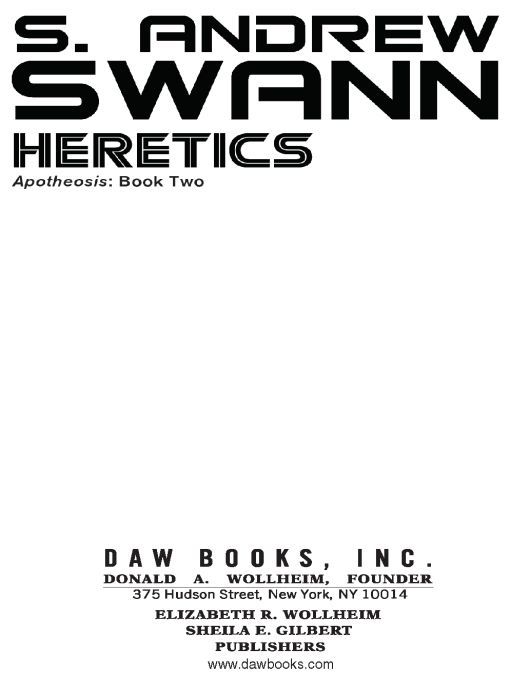 Table of Contents
Â
Title Page
Copyright Page
Dedication
Â
SECOND PROLOGUE - Rituals
CHAPTER ONE - Prophets
CHAPTER TWO - Penance
CHAPTER THREE - Omens
Â
PART FOUR - Crusade
CHAPTER FOUR - Miracles
CHAPTER FIVE - Damnation
CHAPTER SIX - Inquisition
CHAPTER SEVEN - Sacrifice
CHAPTER EIGHT - Martyrdom
CHAPTER NINE - Fallen Idols
CHAPTER TEN - Temptation
CHAPTER ELEVEN - Born Again
CHAPTER TWELVE - Cassandra
CHAPTER THIRTEEN - Fire and Brimstone
CHAPTER FOURTEEN - Faith
CHAPTER FIFTEEN - Shibboleth
CHAPTER SIXTEEN - Repentance
Â
PART FIVE - Tribulation
CHAPTER SEVENTEEN - Devil's Advocate
CHAPTER EIGHTEEN - Excommunication
CHAPTER NINETEEN - Testament
CHAPTER TWENTY - RagnarÃ¶k
CHAPTER TWENTY-ONE - Rapture
CHAPTER TWENTY-TWO - Kingdom Come
CHAPTER TWENTY-THREE - Annunciation
CHAPTER TWENTY-FOUR - Sanctuary
CHAPTER TWENTY-FIVE - Baptism
CHAPTER TWENTY-SIX - Babel
CHAPTER TWENTY-SEVEN - Mission
CHAPTER TWENTY-EIGHT - Witness
CHAPTER TWENTY-NINE - Purification
Â
PART SIX - Transubstantiation
CHAPTER THIRTY - Absolution
CHAPTER THIRTY-ONE - Conclave
CHAPER THIRTY-TWO - Oracle
CHAPTER THIRTY-THREE - Seraphim
CHAPTER THIRTY-FOUR - Invocations
CHAPTER THIRTY-FIVE - Apostates
CHAPTER THIRTY-SIX - Redemption
CHAPTER THIRTY-SEVEN - Encyclical
CHAPTER THIRTY-EIGHT - The Wrath of God
CHAPTER THIRTY-NINE - Special Dispensation
CHAPTER FORTY - Leap of Faith
CHAPTER FORTY-ONE - Apocalypse
Â
SECOND EPILOGUE - Judgment
CHAPER FORTY-TWO - Exorcism
APPENDIX A: - Alphabetical Listing of Sources
REBECCA RAISED HER HEAD WHEN THE CELL DOOR OPENED,
“Rebecca Tsoravitch,” said her visitor.
She recognized him, the same face and voice that had been appearing on the cell's holo every hour. She looked at Adam and asked, “What now?”
“I am here to ask you to join me.”
She thought his eyes were like black holes, sucking in every stray photon in the vicinity. Staring into his face, she could almost feel the tidal stresses. After a moment, she said, “Are you going to ask?”
“You have your own questions,” he said.
“What are you?” she asked, staring defiantly into Adam's face.
“I am your salvation.”
She summoned up all her courage against the dark things that her visitor woke in her mind. “Bullshit,” she said. “Tell me what you are. Tell me the truth.”
Adam smiled. “You worked with Mosasa.”
“Are you going to answer me?”
“You know what I am.”
“You're an AI?” she whispered.
“The light to my brethren's dark. Mosasa was entropy, decay, death. He has joined the flesh he so wished to embrace.”
“What do you want with me? I was part of that darkness.”
“I offer a ladder out of the darkness. All I ask is you serve me.”
Isn't that always the way? Of course I get a choice. This, or a walk in hard vacuum without a suit.
DAW science fiction and fantasy from
S. ANDREW SWANN
Science Fiction:
THE APOTHEOSIS TRILOGY:
PROPHETS (#1)
HERETICS (#2)
Â
THE HOSTILE TAKEOVER TRILOGY:
PROFITEER (#1)
PARTISAN (#2)
REVOLUTIONARY (#3)
Â
THE MOREAU NOVELS:
MOREAU OMNIBUS (#1-3)
FEARFUL SYMMETRIES (#4)
Â
Fantasy:
DRAGONS AND DWARVES
(Novels of the Cleveland Portal)
Â
BROKEN CRESCENT
Â
GOD'S DICE 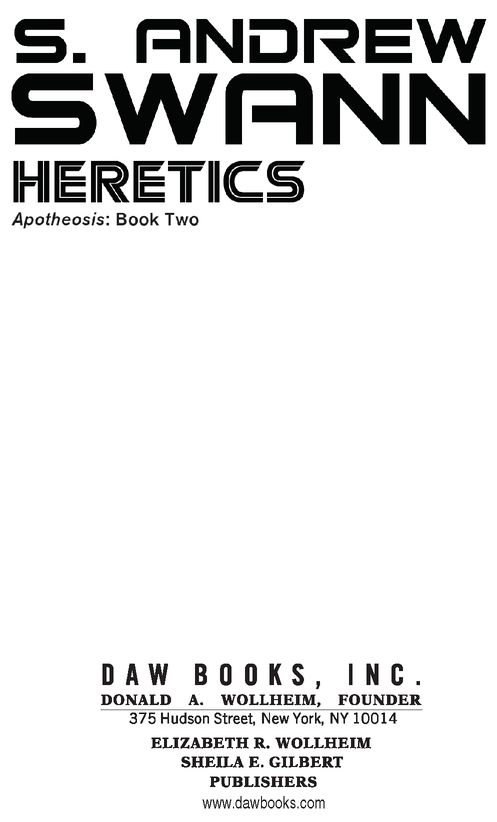 Copyright Â© 2010 by Steven Swiniarski.
Â
All Rights Reserved.
Â
Â
DAW Book Collectors No. 1501.
Â
DAW Books are distributed by Penguin Group (USA)
Inc.
Â
All characters and events in this book are fictitious. Any resemblance to persons living or dead is strictly coincidental.
Â
The scanning, uploading and distribution of this book via the Internet or via any other means without the permission of the publisher is illegal, and punishable by law. Please purchase only authorized electronic editions, and do not participate in or encourage the electronic piracy of copyrighted materials. Your support of the author's rights is appreciated.
Â
Nearly all the designs and trade names in this book are registered trademarks. All that are still in commercial use are protected by United States and international trademark law.
Â
Â
First Printing February 2010
eISBN : 978-1-101-18473-8

To my wife Michelle,
for helping to keep this writing thing
from going off the rails.
DRAMATIS PERSONAE
Survivors of the
Eclipse
Father Francis Xavier Mallory
âRoman Catholic priest
and veteran of the Occisis Marines.
Nickolai Rajasthan
âExiled scion of the House of Rajast han.
Descendant of genetically engineered tigers.
Vijayanagara Parvi
âMercenary pilot from Rubai.
Jusuf Wahid
âMercenary from Davado Poli.
Julia Kugara
âMercenary from Dakota. Descendant of
genetically engineered humans. Former member of Dakota
Planetary Security (DPS).
Dr. Sharon DÃ¶rner
âXenobiologist from Acheron.
Dr. Samson Brody
âCultural anthropologist from Bulawayo.
Dr. Leon Pak
âLinguist from Terra.
Rebecca Tsoravitch
âData analyst from Jokul.
Â
Salmagundi
Flynn Jorgenson
âForestry surveyor.
Alexander Shane
âSenior member of the Grand Triad.
Â
Styx
Toni Valentine
âLieutenant in the Styx Security Forces
under Styx System Security Command (3SEC)
Karl Stavros
âCaptain of the Centauri trading vessel
Daedalus
.
Stefan Stavros
âKarl Stavros' son.
SECOND PROLOGUE
Rituals
“. . . every man must get to heaven his own way.”
âFREDERICK THE GREAT (1712-1786)
CHAPTER ONE
Prophets
“We rely on our ignorance to keep us sane.”
â
The Cynic's Book of Wisdom
Â
“Knowledge without conscience is the ruination of the soul.”
âFRANCÌ§OIS RABELAIS (1495?-1553)
Â
Â
On the fourth day of the sixth month of the 2526th year of the standard Terran calendar, 600,000 kilometers from a lost colony world named Salmagundi, orbiting a star with a catalog ID of HD 101534, the being that had called himself Tjaele Mosasa ceased his three centuries of existence at the hands of a being who called himself Adam.
In one sense, Mosasa's death was murder; in another sense, it could be considered an elaborate suicide.
Â
There had been a human named Tjaele Mosasa once, centuries ago. That man resurrected five Race AIs, flouting every human law against such heretical technologies. That Mosasa had been an outlaw too long to care that the vast majority of humanity would consider the gestalt entity he created an abomination. Not only because of the artificial minds he had re-created, but because they were an artifact of humanity's opponents in the Genocide War.
Mosasa the simulacrum was born when the human Mosasa died, bequeathing his mind to the entity he had created. The ersatz Mosasa bore the human's mind and likeness and became caretaker to the whole.
That had been the first break in the unity of the five.
Â
Only part of Mosasa interacted with the human world, taking the identity of the long-dead human Mosasa. Within that golem watched a pitiless, manipulative computer designed by the only alien species to wage war on mankind, a war that the amoeboid Race only lost because of a cultural prohibition on direct violence.
All five AIs bore the weight of the alien commandments programmed within their coresâthe directive to destroy the human Confederacy. The Race had bequeathed them a subtle weapon for that task: a precise analytical perception of society, politics, culture, and economicsâa view of the vast sweep of history itself.
Even though the Genocide War was long over; even though the Race had been slaughtered all the way back to their homeworld orbiting Procyon; even though the Race was quarantined beneath massive automated weapons platforms that blew away anything that tried to leave the gravity well; even a century after the fact, Mosasa's quintet of AIs still fought that war.
Â
The lawless world Bakunin became their home; the lack of a State to enforce laws against heretical technology preserved their existence. The nature of the world itself helped destabilize the larger Confederacy surrounding it. The AIs used the Race's social manipulation to preserve the unstable equilibrium on the planet as they worked on their long plans to rescue their creators.
As they served the larger goal, the necessity to infiltrate the human world and adopt personas to interact with their foes caused the original gestalt to break down. The AIs became individuals. And as the Confederacy collapsed, the government imploding until it could only claim sovereignty over Terra itself, two of those AIs were lost.
Five became three.

Into the Guns by William C. Dietz
One Hot Daddy-To-Be? by Christenberry, Judy
Edge of Hunger by Rhyannon Byrd
To Have and to Hold by Patricia Gaffney
Lady Folbroke's Delicious Deception by Christine Merrill
Obnoxious Librarian from Hades by Dennie Heye
At Home on Ladybug Farm by Donna Ball
Sophie Morgan (Book 1): Relative Strangers (A Modern Vampire Story) by Treharne, Helen
Children of the New World: Stories by Alexander Weinstein
Her Ladyship's Girl by Anwyn Moyle