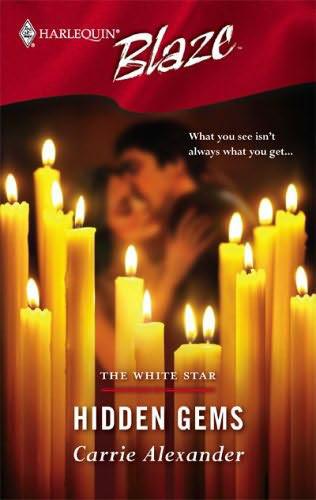 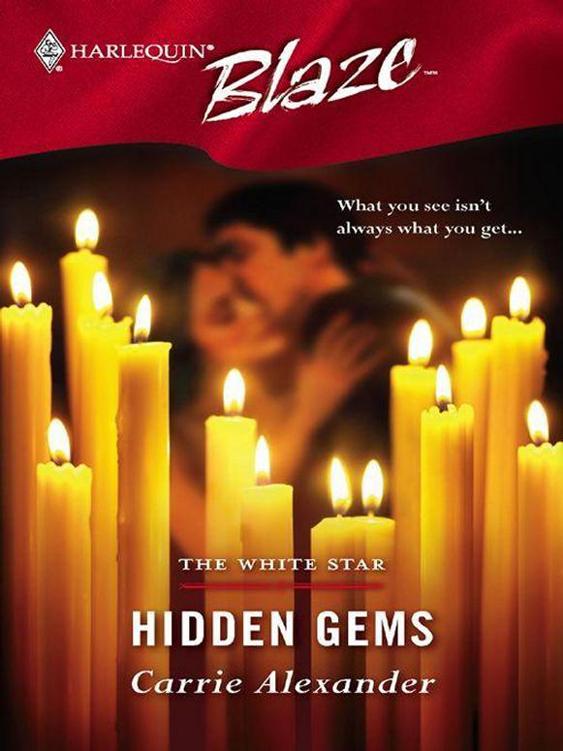 Welcome to Book 2 of THE WHITE STAR miniseries, where romantic legend and the battle between good and evil meet the contemporary sizzle of a Harlequin Blaze love story. What a treat it’s been for me to work with the group of talented authors and editors who were involved in this project. I’m thrilled you’re sharing the adventure with us!

My story is a light caper with a friends-to-lovers theme. I like a strong heroine, and Marissa Suarez is that: bold, confident and mouthy. Usually I’d match her up with an equally bold hero, but Marissa needed someone to trust. Someone like Jamie Wilson, the “boy next door.” When a powerful amulet comes into their lives, along with threats and danger from all directions, Marissa learns that Jamie has been her hero all along.

Please enjoy their story. You can follow the twists and turns the amulet takes through the subsequent White Star books from Kristin Hardy, Jeanie London, Shannon Hollis and Lori Wilde. Visit my Web site at www.CarrieAlexander.com for contests, excerpts and more.

All rights reserved. Except for use in any review, the reproduction or utilization of this work in whole or in part in any form by any electronic, mechanical or other means, now known or hereafter invented, including xerography, photocopying and recording, or in any information storage or retrieval system, is forbidden without the written permission of the publisher, Harlequin Enterprises Limited, 225 Duncan Mill Road, Don Mills, Ontario, Canada M3B 3K9.

This edition published by arrangement with Harlequin Books S.A.

® and TM are trademarks of the publisher. Trademarks indicated with ® are registered in the United States Patent and Trademark Office, the Canadian Trade Marks Office and in other countries.

The Legend Continues…
Long ago and far away was an ancient kingdom where the desert and river intersected with the heavens. There lived a handsome young warrior named Egmath and his beloved, the princess Batu. Ever since the two were children, they had believed with all their hearts that they were destined to be together. Over the years they had often met in secret beneath the stars, sharing their dreams in whispers and innocent kisses.

But Egmath and Batu were soon separated. He went into training as a soldier in the king’s army. She was tutored in the royal palace with her older sister, Anan. Both girls awaited the time that their father, the king, would arrange suitable marriages. Batu prayed daily that one day her hand would be given to Egmath.

The time came when a conflict arose between the small desert kingdom and a neighboring village. After several skirmishes, the king’s army was victorious. Egmath returned as a hero, to be feted for his bravery with a grand party at the palace.

Egmath was eager to see Batu again, but his first respects must be paid to Anan. The princess was kind and comely, though lacking her younger sister’s spirited beauty. The king looked on with approval.

Throughout the evening of dancing and music, Egmath had eyes only for Batu. She was exotic and glamorous in her finest gown and ornate jewels. As the night grew long, he spied her sneaking away through the small palace’s stone courtyard and hurried to follow.

She went to their favorite meeting place, a lush copse near the river where the water pooled among mossy rocks. Egmath stopped and watched her, hidden by the palms as she stripped to a linen shift and dove into the water.

Alarmed, he emerged from the darkness. “Batu.”

She swam to him through the gleaming dark green water.

“You should not be here alone.” The words choked in his throat as she rose, slim and graceful, the shift clinging to her ripe curves. “You are a woman now, no longer a child.”

Batu’s eyes sparkled provocatively as she pressed water from her long black hair. “I am not alone as long as you are here.”

He tapped the miniature pearl cat strung on a cord around her neck. “You still wear your amulet.”

“Of course. I am not married yet.” All youth wore the amulets, to be surrendered only when the boys became men and the girls became wives.

The mention of marriage gave Batu a strange shyness. When she looked into Egmath’s eyes, her heartbeat skittered like a scorpion in the sand. He was so tall, his body grown strong and hard and unfamiliar.

She had to look away. They had been apart for too long.

“Batu, you must know how much I have missed you.” He caught her chin, then touched his palm to her cheek. The kohl and bright paint had washed away from her eyes and lips. The fancy jewels were gone. She was still the girl he’d always loved.

Yet different. Desire burned within him.

She came into his arms. “Oh, Egmath. I was so afraid I would lose you.”

She lifted her face. “Promise me.”

He responded without thinking, saying what he wanted to be true. “I promise, sweet one.”

He touched a tender kiss to her lips, intending only to reassure her before they returned to the party. A warm breeze stirred the eucalyptus and acacia, bending the tips of the cypress trees. From the black desert, a jackal howled.

Egmath’s blood quickened. He tightened his arms around Batu. The body that had been as slender and strong as a reed was now softer and rounded, inciting his hunger. Their kiss deepened, becoming passionate instead of chaste.

“Promise,” Batu pleaded. Life was not as simple as it had been when they were children. She feared their future was uncertain despite a hundred promises from Egmath’s lips.

Courting a thrilling danger, he boldly cupped her breast. His stroking fingers chased away her worry.

“We will be together forever,” he vowed.

“Together forever,” she agreed as the fire leaped between them.

She believed. Their love was as unrelenting as the wind that swept across the dunes, as constant as the flow of the river, as everlasting as the stars in the sky.

She would always believe.

1
“I HAVE NOTHING to declare,” Marissa Suarez told the customs agent in a voice like broken glass, “except that my boyfriend’s a swine.”

A snicker rose from the crowded line behind her.

The bored official merely stamped her customs declaration form without looking up. “You can’t bring pork products into the country, ma’am.”

Paul Beckwith, forthwith known as Cheating Slime, was still in the Cayman Islands hobnobbing with his clients. If he’d missed Marissa it was only because she wasn’t there to slather sunscreen on his perfectly trapezoid shoulders and back. But any bunny off the beach could handle that duty. Paul would have no objections. When he hadn’t been ditching her for “vital” meetings, he’d been drooling over every pair of bouncing breast implants on Seven Mile beach.

Marissa Suarez was not a woman who put up with that kind of bullshit.

She was, unfortunately, a woman who chose the kind of man who shoveled it.

With a clenched-teeth smile, she took the card from the customs official and tucked it into her passport. She truly had nothing to declare. Returning five days early from a supposedly romantic getaway, she was not only sans boyfriend, but minus the promised toasty tan and post-coital bliss, too.

However, she had acquired a resolution during the flight into JFK: no more bad choices, no more mistakes.

Next time—because, let’s face it, she wasn’t going to swear off men altogether—she would pick a guy who was the antithesis of the handsome, career-driven charmers she usually went for. Someone sweet, tender, laid-back.

So what if she wasn’t sweet, tender or laid-back herself? Opposites were supposed to attract.

New arrivals jostled into the roped-off customs line. A fat woman with a bad sunburn and a floppy hat jarred Marissa’s elbow just as she’d twisted to tuck her official papers into the straw bag hanging off her shoulder.

The documents flew from her hand. When she bent to reach for it, the woman beaned her in the head with a bulging carry-on.

Marissa bounced off the cordon and pitched forward in her spike-heeled sandals, falling onto her hands and knees. “Ouch!”

“Let me help,” said a deep male voice. The French accent seemed to be authentic, but in Marissa’s current state of mind she was prone to doubt the sincerity of the entire male species. “These people have no manners.”

The stranger knelt near her suitcase, smoothly offering one hand to help her stand while swooping up the passport with his other. He was dark and slight, with a seriously I’m-too-French-for-razors stubble happening below his gaunt cheekbones. He reeked of tobacco. Smoky sunglasses concealed his eyes, but she sensed he’d evaluated her in one lizard-like blink.

Marissa rose and brushed away the strands of hair that had come free of her ponytail. Her knees stung. “Thank you, but please let me have that,” she said, being politely firm as she reached for her passport.

The Frenchman had maneuvered her around so that her back was to the bustling meet-and-greet area. His eyes crawled over her photo ID and return ticket. Marissa steeled herself to deflect a suave compliment on her ebony hair or exotic eyes—she’d heard them all—but he simply handed over the passport without comment.

After a glance past her shoulder, then the faintest twitch of a smile, he melted away into the nattering crowd of arrivals who’d cleared customs. “Good day.”

Odd. Marissa snapped the passport shut and pressed it to her breastbone, feeling the way she did when a shadow passed over the sun. She checked her luggage, half expecting that he’d lifted her wallet. But all was intact, including the tagged and processed bag sitting at her feet.

“Outta my way, supermodel,” said the fat woman in a Bronx patois that hacksawed through the moment of unease. She trundled by with a large stack of luggage.

“Pardon,” Marissa trilled. Thankful that she’d traveled light, she reached for the small suitcase that was packed with little more than damp bikinis, shorts, tanks and a couple of sundresses. The big straw carry-all she’d purchased on the island held a stash of Evian, her wallet and passport, makeup bag, camera, the current issue of French Vogue and five crumpled sheets of stationery from the Grand Cayman Beachcomber.

Mistletoe Mystery by Sally Quilford
The Mind Pool by Charles Sheffield
Till We Rise by Camila Cher Harmath
Dark Place to Hide by A J Waines
The Virtuous Woman by Gilbert Morris
Shades of Earth by Beth Revis
A Bride for Christmas (Sweet Regency Novella) by Fish, Aileen
Love, Loss, and What We Ate: A Memoir by Padma Lakshmi
Joy and Tiers by Mary Crawford
The Spymaster's Lady by Joanna Bourne